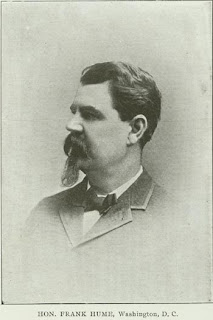 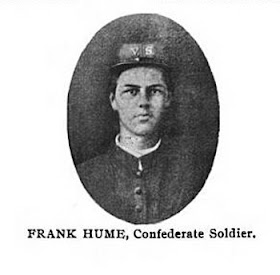 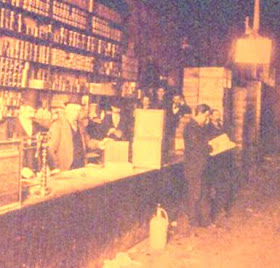 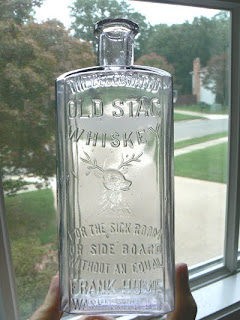 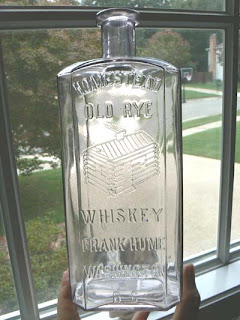 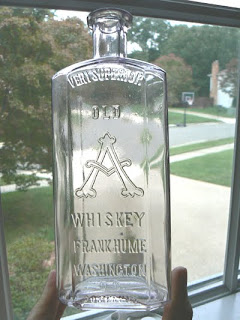 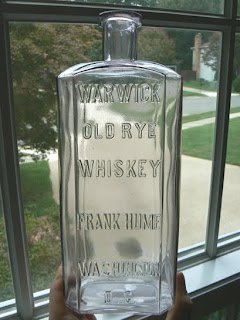 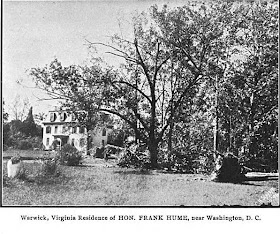 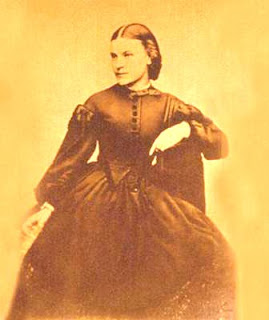 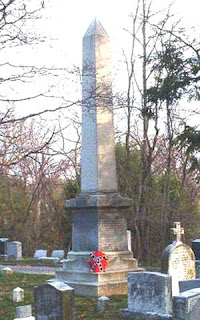 Shown here in maturity, Frank Hume led a life that included service as a Confederate spy, later becoming the largest grocer and purveyor of liquor in the Federal capital, Washington, D.C., and ending as a well-known philanthropist whose name continues to be memorialized in his native Virginia. Bottle collectors also note the elaborately embossed bottles of his whiskeys.

Hume was born in Culpeper County in 1843, the son of Charles and Virginia Rawlins Hume. At the age of 18 he enlisted in the Confederate Army, joining up with one of Gen. James Longstreet's units called The Volunteer Southern. Hume served as a signal scout with General J.E.B. Stuart and participated in eleven major battles, receiving a serious wound at Gettysburg. Part of his service was reputed to have been as a spy sneaking Northern battle plans from D.C. to Gen. Robert E. Lee. It was during this escapade that he apparently stopped in Alexandria long enough to have his picture taken.

Hume returned home after the Confederate surrender at Appomattox and settled in Alexandria. He reportedly tried his hand briefly at farming and then went to work in a Georgetown grocery. His older brother, Thomas, already was an established grocer in the District. Finding mercantile an agreeable pursuit, Hume turned to starting a family. In 1870 he married Emma Norris at Trinity Episcopal Church in the District. She was the daughter of a prominent Washington lawyer with Virginia roots. Frank and Emma would have eleven children.

A year after his marrige Hume opened his own grocery store in downtown DC, located on Pennsylvania Avenue near the old Central Market. He is shown here in 1892 perusing a ledger. The store prospered, with the sale of “wet goods” -- liquor -- being an important part of his merchandise. Among Hume’s brands were “Old Stag,” Homestead Old Rye,” “Old ‘A’ Whiskey” and “Warwick Old Rye.” as shown here in four flasks. One observer has noted that Hume chose to emboss his bottles rather than slap paper labels on them. By going to this additional expense, it is suggested, he knew he could count on each brand having substantial sales.

Meanwhile Hume’s brother Thomas was making a name for himself as a Washington social climber, known for the extravagance of his parties. A D.C. journalist noted about one such event that more than the notables present, it was the prodigality of the entertainment that caught his attention. He wrote that Hume provided two hundred guests with “a perpetual lunch for all, (with liquid attachments embracing wines, brandies, whiskies, mixed drinks, and plain lemonade), cigars for all, and towards evening a dinner, which was not only ample but excellent.”

Unknown to the public, Thomas Hume was heading into bankruptcy, ultimately with debts of $100,000 and assets of $6,000. In October 1881 on the day it was announced that his firm was being dissolved by his withdrawal and retirement, he suffered a heart attack in his office and died on the spot. A court later declared him “utterly insolvent.” Creditors howled and attacked Frank Hume for repayment. Frank successfully fended off financial responsibility, although his brother’s sudden demise must have been a shock.

At that time Hume was enjoying life at his newly acquired mansion called Warwick Estate. It served as his summer home, positioned on an Alexandria hill west of the point where Commonwealth and Mount Vernon Avenues merge. He also kept a DC residence. Over the next 25 years, Warwick was the site of many holiday and family celebrations where guests enjoyed Hume’s hospitality, as well as views of the Potomac and Washington. As many as 150 guests at a time attended Fourth of July celebrations where large U.S. flags adorned trees and guests enjoyed picnic feasts, lemonade and champagne. These events were said to be especially memorable for the twilight fireworks display and the firing of a cannon.

Unlike Thomas, however, Frank Hume could afford his hospitality. His mansion also gave him a residence in Virginia and from 1889 to 1899, over several elections, he was sent by Alexandria voters to the Virginia House of Delegates. He also was becoming recognized as a D.C. business leader. He became president of the Independent Steamboat and Barge Company, a director of the Fireman’s Insurance Co., and served on the Washington Board of Trade. He was an advocate for a new bridge linking Alexandria and the District that ultimately became Memorial Bridge.

Hume was also gaining a reputation as a philanthropist. In 1891 he donated the land for a school in Arlington, Virginia, along with an adjacent area for a playground. In return the school was named for him. Hume Elementary School operated for 67 years, closing in 1958 but rescued by citizens for use as a local museum. The building still stands on Arlington Ridge Road and is listed on the National Register of Historic Places.

In a more controversial act of generosity, Hume provided food for Coxey’s Army. That was a protest march by unemployed American workers, led by the populist Jacob Coxey.   They marched on Washington D.C. in 1894, the second year of a four-year economic depression that to that time was the worst in U.S. history. It is considered the first significant popular protest march on Washington. (Needless to say it would not be the last.) Officially called the Commmonweal of Christ, the march was popularly named for its leader, Coxey. According to press reports, Hume received a bouquet of flowers from the marchers as they left.

After a lifetime of achievement, in 1906 at the age of 63 Frank Hume died. His wife, Emma, whose photo indicates a no-nonsense woman, apparently continued to manage the grocery for a time. In 1907 Federal records show her registering the brand name “Old Stag Rye.” Emma died in 1931 and is buried with Frank at the family grave site in the Ivy Hill Cemetery in Alexandria. Note the Confederate flag. Hume’s Warwick mansion was demolished in 1953 and 55 acres of land sold for townhouses now known as Warwick Village.

One major tribute to an extraordinary man and his career remains on view. At the University of Virginia, Charlottesville, located in the plaza between Brown College and Monroe Hall, one still can see the Frank Hume Memorial Wall and Fountain, dedicated in 1938. It memorializes him as a benefactor of the university Mr. Jefferson founded.
Jack Sullivan at 7:37 AM
Share