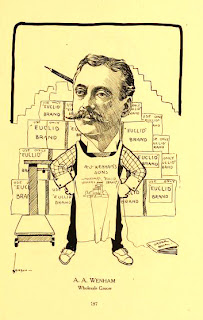 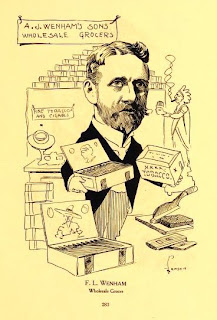 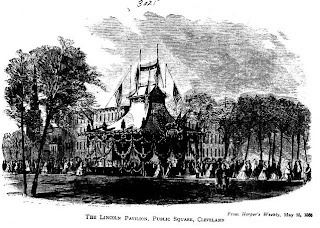 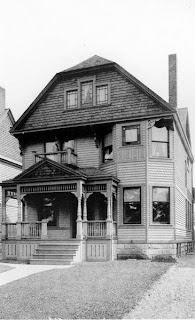 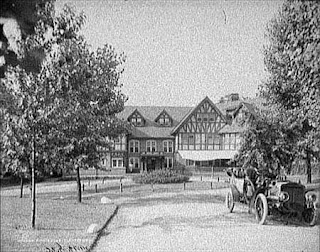 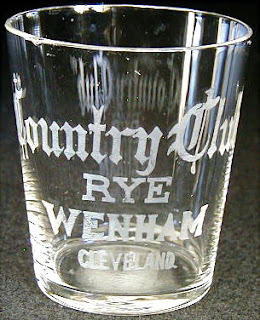 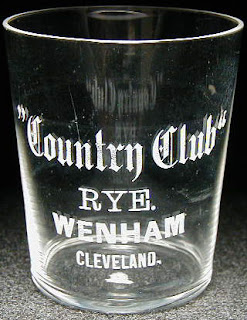 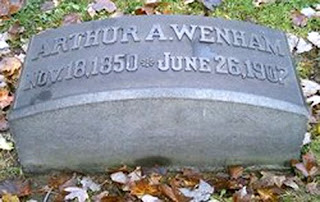 In 1904, a book of caricatures entitled Clevelanders as We See ‘Em depicted 290 of the city’s most prominent citizens. Only one set of brothers was featured -- A.A. (Arthur) Wenham and F. L. (Frederick) Wenham. It was testimony to their prominence and prosperity in the liquor and grocery business. Yet within three years their firm was gone, a casualty of the early deaths that plagued the family.

The story begins in 1825 when their father, A.J. Wenham, was born in England. At an early age, presumably in the company of his parents, he emigrated to the United States and settled in the Cleveland area and attended school. In the late 1840s A.J. married a woman named Melvina and their first son, Arthur, was born in 1850.

The elder Wenham by this time was engaged in the retail business in Cleveland. City directories of that time show him as a partner in a drug store called Wenham and Beckwith. He also may have operated a dry goods firm. In 1857, a second son, Frederick, was born. The elder Wenham’s importance in early Cleveland business circles is confirmed by his being chosen in 1865 to be part of the local civic guard of honor for the body of the slain Abraham Lincoln when he lay in state in Cleveland, shown here.

About 1882, the family went into the wholesale grocery and liquor business, located at 138-140 Water Street. The company was called A.J. Wenham & Son. Within four years of
its founding however, A.J. Wenham died unexpectedly, not yet 60 years old. Arthur and Frederick took over the operation and in 1886 renamed it A.J. Wenham’s Sons Wholesale Grocery.

In 1874, age 24, Arthur married Lulu Pelton, 22, the daughter of Frederick W. Pelton. Pelton was a Civil War hero and successful businessman who was elected to the Cleveland City Council in 1965, and later became Mayor (1871-1873). Arthur took over the grocery side of the Wenham business; Frederick looked after tobacco and liquor. They eventually moved the company from Water Street to 138-144 Sheriff Street.

Under the direction of the brothers the firm prospered. Their Euclid brand of food products became well known in the Cleveland area. Embossed bottles with the Wenham name are found widely by diggers in Northern Ohio . As was common with grocers of the time, the brothers featured their own cigar line called Old Monopolists and their own brands of whiskey, including Wenham’s Grove, Linn’s Castle, and Edgewater. Country Club Rye, advertised on two shot glasses shown here, was their flagship brand.

Things seemed to be going well for the Wenhams. Their widowed mother and sister Grace resided at 337 Franklin Street. Nearby, Frederick built a large house for himself and his family at 1206 Cedar Avenue, shown here. Arthur and Lulu, with son Russell born in 1885, lived at 166 Kennard. Arthur was one of the founding members of the Euclid Club, shown here, one of the first country clubs in the Cleveland area devoted solely to golf. Over time, important golf tournaments like the Western Open were held there.

In 1904 -- the same year the brothers were memorized with a caricature -- early death struck the Wenhams again as Arthur’s wife Lulu unexpectedly died in their home. Only 50 years old, she was buried in the Pelton plot at Riverside Cemetery, shown here. Arthur appears to have been devastated. He sold their house on Kennard and moved into an apartment at the Euclid Club.

The Wenham firm moved for the last time in 1906, to 2204 East Fourth St., SE. A year later Arthur suffered an apparent heart attack in his rooms at the Euclid Club and died at age 57. He was buried next to his wife. With him died A.J. Wenham’s Sons company. After 1907 the firm disappears from Cleveland business directories.

What happened to Frederick is unclear. The 1920 census finds him living in Cuyahoga County but gives no hint about his occupation. Arthur’s son Russell became a farmer and lived near Painesville, Ohio. As if carrying out the family fate, this Wenham died in 1935, only 50 years old.
Posted by Jack Sullivan at 9:52 AM