Edwin Schiele Sat an Autocrat at the Bar 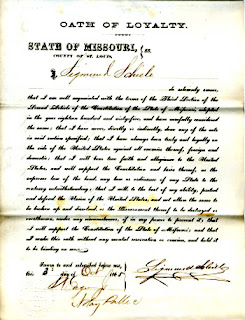 Edwin Schiele’s family were anything but aristocracy.  His father, Sigmund Schiele was a German Jewish  immigrant to America who settled in St. Louis, Missouri. For reasons unknown, in the immediate post Civil War era Sigmund suffered the indignity of being made to swear a special pledge of allegiance to the Union.  Sigmund’s signed oath, shown here, now resides in a Missouri museum.  The practice has subsequently been denounced by observers as a disgrace on the state.  Born in 1862, at the time of this incident Edwin was only three years old.

Not discouraged by his treatment at the hands of Missouri officialdom,  Sigmund engaged in the wholesale liquor business in St. Louis.  With his wife,  Fanny Shulman Schiele, he groomed Edmund for a business career.   The boy attended public schools until he was fourteen, then went to work for a local wholesale notions store called Judd & Pratt.  After three years in that business, Edmund became

In 1882, age 56,  Sigmund died and was buried in New Mount Sinai Cemetery in St. Louis County.  His monument is shown here.   His son, now just 22 years old,  took over the father’s business and  changed the name to Edwin Shiele & Co.  The company was located at 107 North Main Street in St. Louis.   After 14 years of building his business,  Edwin in 1898 married Minnie Kramer, daughter of Abraham Kramer.  Over the next few years they had three children,  Herbert, born 1899;  Frances, born 1903, and Edwin Sidney, born 1909.  The family lived at 4558 Washington Avenue. 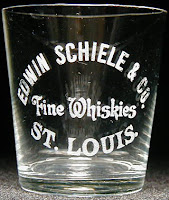 Schiele proved to be a excellent merchandiser for his alcoholic products.  Among the limited number of brands he featured were “Five Feathers," “Geisha Malt Rye,” and "Old 91,” the last shown in a purple bottle.   His flagship label was Autocrat Whiskey. He did not come to “own” that name, however, without a fight.   The Autocrat brand was contested between Schiele and the Wichman, Lutgen Co. of San Francisco (see my July  2012 post on Lutgen).  Both outfits registered the trademark with the Federal Government in 1905.  How the dispute was settled is not clear, but Schiele continued to feature the Autocrat brand. 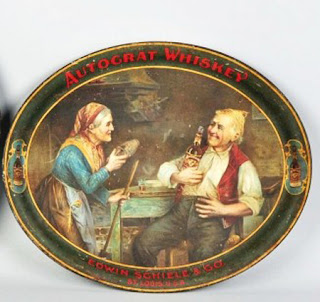 His merchandising to saloons included shot glasses and other giveaways, with tip trays being his special mode of advertising for Autocrat 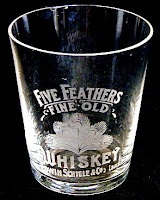 whiskey.  Displayed throughout this post are four examples of the lithographer’s art that Schiele featured on his trays.  All of them present two figures and often, but not always,  a bottle.   One shown below is an exception, showing an elderly, apparently married, couple sharing a cup of tea and a newspaper.   The couple shown above seem a  bit more lively and presumably are preparing to share a bottle of Autocrat Whiskey.  The same bottle has more prominence in the tableau of a monk playing cards with a vested gent.   It plays an even larger role in the picture of a bare breasted woman and a cherub in a woodsy scene. 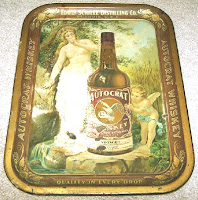 As his business prospered, Schiele became well known in club circles,  belonging to the Westwood Country Club,  the City Club,  the Triple A

Club and Columbian Club.  A 1921 biography said he was “widely and favorably known in the membership of these organizations.”  He also was active in Masonic orders and attained the 32nd degree of the Scottish rite.  A member of the Ethical Society, he also attended a St. Louis synagogue.

Unlike most whiskey men, in politics Schiele was a Republican, apparently ignoring the many “dry” advocates in the party.  During the height of the Temperance Movement  before nationwide Prohibition, the voters of Missouri rejected prohibition in three separate initiative elections in 1910, 1912, and 1918. When temperance crusader Carrie A. Nation entered a bar in Kansas City in April 1901 and began to smash liquor bottles with her hatchet, she was promptly arrested and fined $500 ($12,926 in 2010 dollars), which the judge stayed as long as she agreed to leave Missouri and never return. The Missouri General Assembly did ratify the 18th Amendment in 1919, but only after it already had received enough ratifications to become part of the Constitution. 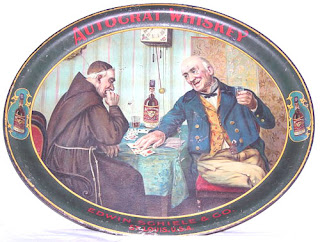 As a result of Missouri’s tolerance for alcohol,  Schiele was able to operate for 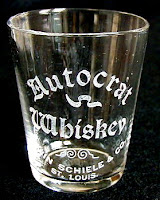 some 36 years.  In 1903, he moved the company to 204 S. Fourth Street, a location he would occupy for the next 13 years.  About the same time,  as other whiskey wholesalers and blenders were doing, he added to the company name the designation “Distillers.”   A final move occurred in 1916 when Schiele moved one last time to 118 North Third Street, before shutting down because of Prohibition.

Even with losing his whiskey business Schiele never missed a beat.  In 1913 with a brother, Seymour, he had founded an advertising business which proved to be very creative and grew, according to contemporary accounts, into one of the leading firms of that kind in St. Louis.  After 1920 he concentrated on the advertising business.  He also was the treasurer of Griesedick Beverage Company.  The Schiele family became well-known nationally for their pioneering work in the phonograph and records industry.  With Edwin’s money backing the effort, son Herbert Schiele founded Artophone in St. Louis.  It produced an early phonograph and subsequently became a national distributor of phonograph records.  Edwin was a director and the outfit’s treasurer and likely principal financial backer. 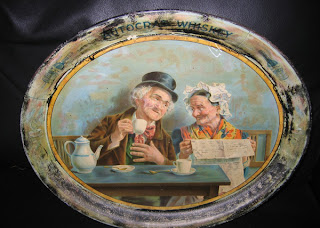 In 1935, at the age of 73,  Edwin Schiele died in St. Louis and was buried next to his father and mother and other family members in New Mount Sinai Cemetery. Whatever indignities had been visited on his family were long in the past and the Schiele name had come to be highly respected in St. Louis business circles.   Edwin was no autocrat but he put the brand name into many a Midwest saloon.