The Froehlichs of Newark: Notable in New Jersey

One of my objectives for this blog is to have at least one whiskey man or family from every state in the Union. After more than two years, I have been unable to find an interesting subject in about dozen states.  Most are states with early prohibition efforts.  It had not occurred to me that New Jersey might be one in which finding notable candidates for a vignette would be difficult.  But the search has proved frustrating.  After considerable time, I have centered on the Froehlich family of Newark -- three generations of wholesale liquor dealers.

The progenitor of this family was Ignatz Froehlich,  born in Europe in 1819.  His country of birth was given variously as Austria, Germany and Czechoslovakia.   His wife, Henrietta, was of a similar background.  Both were of Jewish

heritage.   The 1870 Census found Ignatz living with his family in Newark,  his occupation given as “wholesale liquor dealer.”   There were two children,  a son, Samuel, age 20, listed as a “clerk,” likely in his father’s liquor store, and a daughter, Lizzie, 14.

By 1880,  Samuel, now 30, shown below, had stepped into his father’s shoes.  He was running a wholesale liquor business, with a partner, Philip Koehler.  At this time Samuel, shown below, was married to a woman with a similar immigrant background.  Her name was Laura Schwartz.  They would have a family of at least one son, Irving, and two daughters. 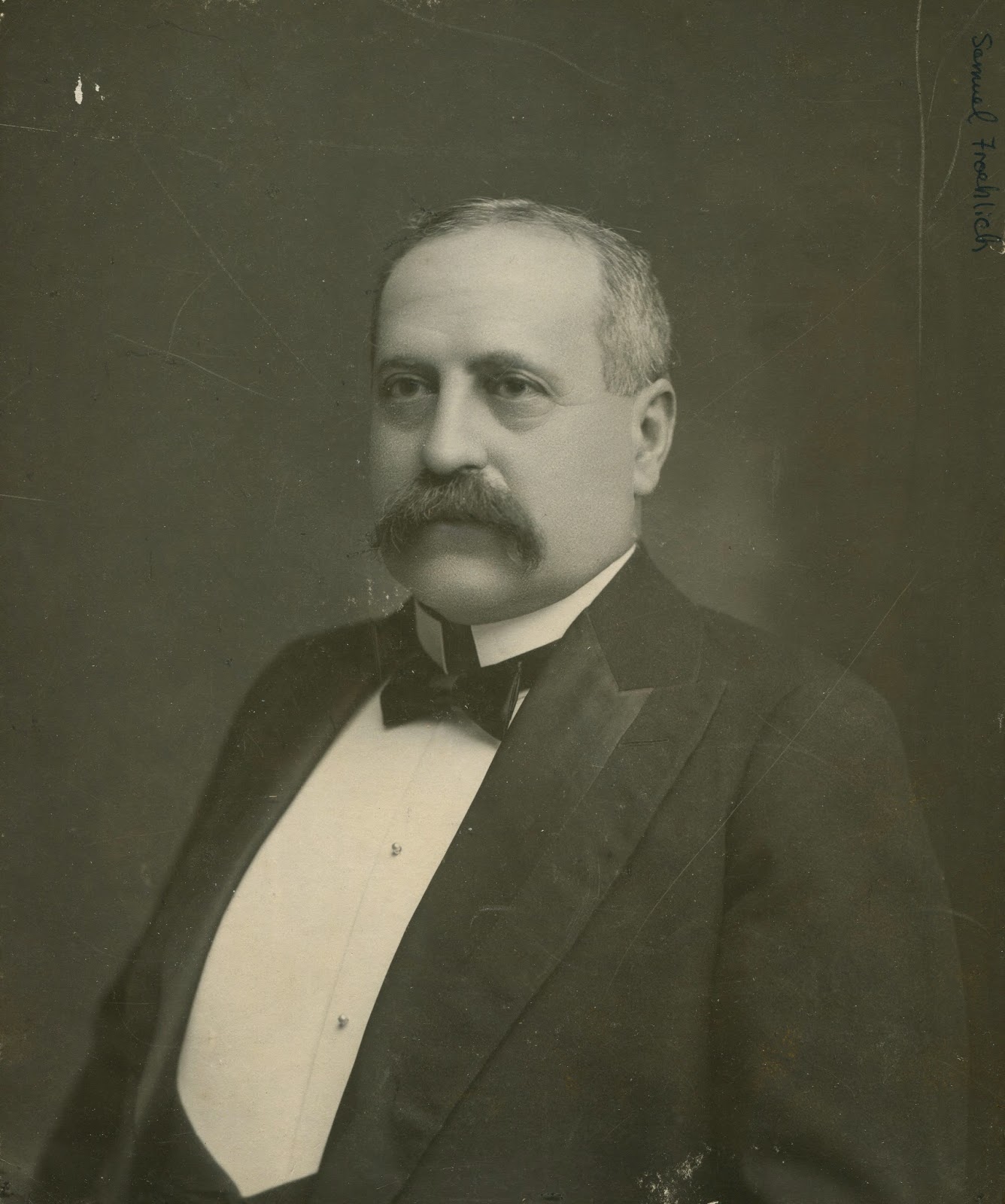 Samuel’s firm, Froehlich & Koehler, issued a saltglaze stoneware jug with a cobalt script label that bore their names.  It also mentioned Newark prominently.  By the late 1800s,  the partnership seems to have been dissolved and Samuel Froehlich struck out on his own.  As his

son, Irving, came to maturity, Samuel brought him into the business and the company name became Froehlich & Son.  Their liquor business was located at 49-51-53 Mechanic Street in Newark. 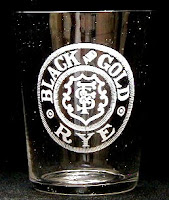 The Froehlichs had a single flagship brand. It was “Black and Gold Rye,” a label they merchandised heavily and trademarked, somewhat belatedly, with the federal government  in 1912.  For favored saloons and other establishments the business provided a embossed back of the bar bottle and shot glasses, all advertising Black & Gold Rye.  The glasses also featured a monogram F & S in an outlined shield design.

The Froehlichs also also provided a “bar coin” to be used by patrons flipping for drinks.   The winner “heads” showed a donkey head and an ad for Black and Gold Rye. 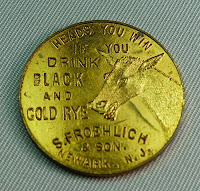 The loser “tails”  showed a different element of the donkey’s 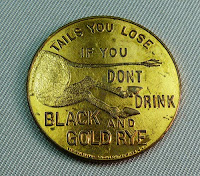 anatomy.   They also issued a unusual but practical scorecard in the shape of a baseball.  On it one could chart the score, innings, and outs. A unique giveaway in the whiskey trade, it probably was aimed at the retail customer.

There is other strong evidence of the Froehlichs success in Newark.  Samuel was elected as a member of the Newark Board of Trade, an organization dominated by Anglo-Saxon names such as Brewster, Heath, Tompkins, Halsey and Bathgate.  Despite the success and prestige the firm achieved,  Froehlichs ultimately ran afoul of the Pure Food and Drug laws. 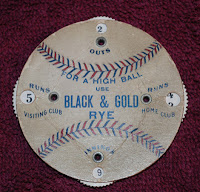 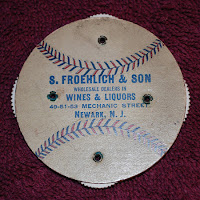 In November 1915 the United States attorney for the District of New York,  acting on a report from the U.S. Department of Agriculture,  filed a case against Samuel and Irving Froehlich, charging that they had violated the law on a quantity of apricot brandy, “which was adulterated and misbranded.”   Although the label read that it was apricot brandy, an analysis by the government showed that: “The product contains little or no apricot brandy.”
Instead it was, according to the analysis,  “neutral spirits, artificially colored and flavored in imitation of apricot brandy.”   Moreover, it contained a high level of “fusel oil,” an unsavory and unhealthy byproduct of alcohol distillation.  The word “fusel” was from the German and originally meant “bad liquor.”

On January 10, 1916, the Froehlichs entered a plea of guilty to the charges and the U.S. District Court imposed a fine of $25, the largest amount allowed under the Food and Drug Acts.   The Froehlichs must have smiled at that small financial “slap on the wrist” as they paid the fine.   But more serious challenges were on the horizon.  In 1919 the U.S. approved an amendment to the U.S. Constitution that banned liquor everywhere.   New Jersey, which never had had statewide prohibition, was made to comply.  Froehlich & Son shut its doors.

The 1920 census found Samuel, now age 70, and his wife, Laura, living with their daughter, Edna, her husband and three children in Newark.  Samuel listed himself as “retired.”   Two years later he would die.  He was interred at B’Nai Jeshuron Cemetery in the town of Hillside, Union County, New Jersey.  His gravesite and that of his wife are shown below. 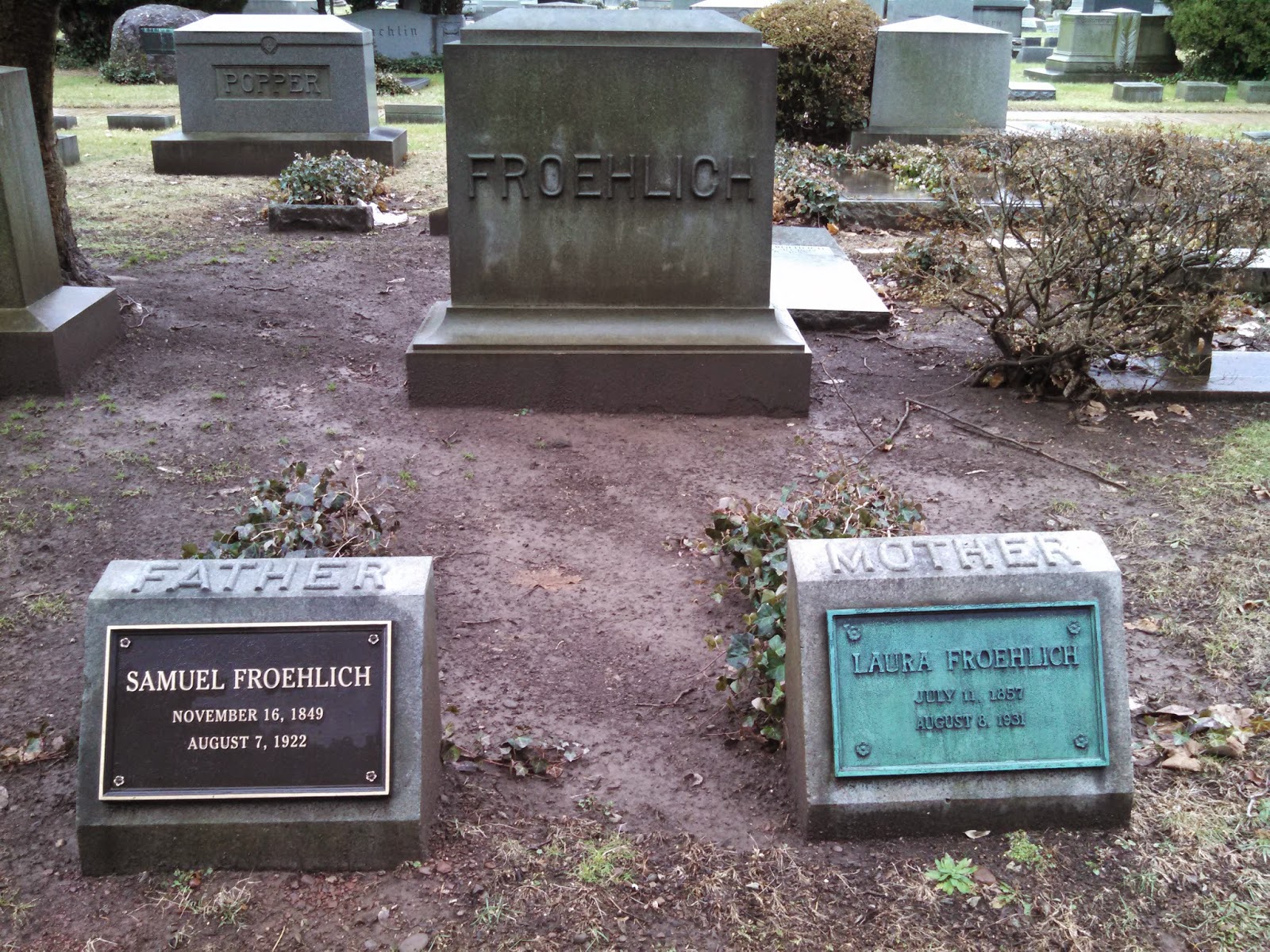 According to his descendant, Irving Froehlich married and lived in northern New Jersey.  He left the liquor trade, however, possibly because of the advent of National Prohibition.

With Prohibition came the end of at least a 50 year tradition of Froehlichs in the liquor trade in New Jersey.   They were truly a successful liquor dynasty in a state that gave the Nation few notable whiskey men.

Note:  The photo of Samuel Froelich and of the gravesite both were courtesy of one of his descendants, Andrew Schwartz of Clifton, N.J., to whom I am very grateful for the help.  He also provided the information on Irving Froehlich's future.