When South Carolina has produced few, if any, notable whiskey men, why headline for attention Benjamin Ryan Tillman, noted for being a Southern racist politician? Because Tillman, also known as “Pitchfork Ben,” was a major reason for the lack of such personalities. He engineered the only instance in American history that a state required all liquor sold within its borders to be bottled and dispensed through its own state-run facilities.

Today many states, including my home Commonwealth of Virginia, control liquor sales by employing state-run stores.  But many different brands of spirits grace the selves.  Tillman’s level of control went considerably beyond that.  Under his regime only one brand of beer, wine or whiskey could be sold in South Carolina and it had to be sold in a bottle authorized by the state.  The dispensing organization officially was called the “South Carolina State Dispensary.”  Many state residents referred to it as “Ben Tillman’s Baby.”

Tillman, of English descent, was born in August 1847 in Edgefield County in southeastern South Carolina not far from the Georgia line.  Although he showed early promise as a student, he left school at age 17 at the outbreak of the Civil War to join the Confederate Army.   Six days after enlisting, however, he suffered an infection that eventually required his left eye be removed.  As a result, he never fought for the Stars and Bars. 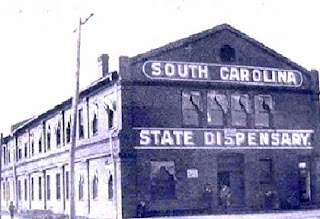 Nevertheless, he remained passionate for the Southern cause.  In 1876, Tillman came to statewide attention as the “Commander” of Edgefield County’s Sweetwater Sabre Club, a paramilitary unit dedicated to terrorizing Reconstruction officeholders, many of them African-Americans.  A biographer told the story: "The 29-year-old Tillman, with his red-shirted troopers, participated in the Hamburg Riot on July 8, an occasion marked by the murder of a number of black militiamen who had conducted a celebratory parade through the mostly black town of Hamburg, South Carolina, four days earlier. As Tillman himself would later put it, "The leading white men of Edgefield" had decided "to seize the first opportunity that the Negroes might offer them to provoke a riot and teach the Negroes a lesson" by "having the whites demonstrate their superiority by killing as many of them as was justifiable." None of the perpetrators of the Hamburg murders were ever brought to justice." 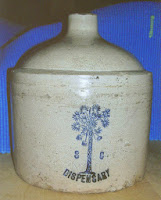 Instrumental in helping restoring “white supremacy” in South Carolina, Tillman also has been credited with bringing more modern farm practices into the state.  He fostered agricultural education and led an organization called the South Carolina Farmers Association that helped catapult him into the governorship in 1890. Although he is given credit for establishing Clemson University, he also was behind a constitutional convention that disenfranchised the state’s blacks and instituted the Jim Crow laws.

Tillman also was pivotal on the issue of whiskey.  Prohibition forces were knocking at the door in South Carolina.  One prohibition bill in 1889 had only narrowly failed in 1889 in the South Carolina House and a second in 1990 passed there only to be defeated in the State Senate.  South Carolina stood on the threshold of going completely “dry.”  Enter Tillman  backed by his farmer coalition.  He proposed a halfway solution.  The saloons would close along with all liquor dealerships but whiskey, wine and beer would still be available everywhere through a state dispensary system.

Just before Christmas in 1892, compliant legislators voted to establish the scheme, in part because some recognized the significant revenues (and possible opportunities for graft) it would generate when the only liquor that could be legally sold in South Carolina had to be purchased through a government

bureaucracy.  The monopoly was all-encompassing.  Wholesale and retail sales of alcohol were controlled by a state board that at the outset consisted of Tillman, his attorney general and the state controller.  The Dispensary was led by a commissioner who was appointed by Tillman.  From the outset the Governor gave preference to buying supplies from local brewers and distillers, keenly aware that his farmer supporters were selling significant amounts of grain to them.  As shown here on a label, however, the Dispensary frequently had to go outside the state for supplies to thoroughly “wet” states like Maryland.

The South Carolina State Dispensary initially featured a single design on the jugs and bottles in which it sold its liquor.  It featured a palmetto tree, the state symbol.  The tree appeared on the label of ceramic jugs and on the embossing of glass bottles.  For

the latter the tree had two crossed logs at the bottom of the trunk. They bore a resemblance to the crossed stripes on the Confederate battle flag.

Although South Carolina took no special pains to make containers attractive -- after all, they had no competition -- dispensary bottles have been avidly collected for their design and color as well as their historical significance.  Because of differences among glass manufacturers and small design nuances a number of varieties exist. Bottle collectors have provided highly detailed comparisons among various styles.  Prices for rarer items have risen steeply in recent years. 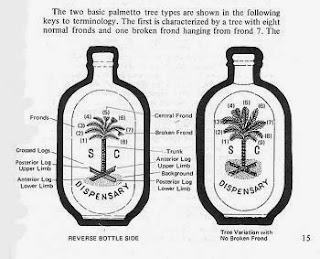 The palmetto design was featured for seven years, from 1893 to 1900.  A change was made reputedly because Prohibitionists objected to having such a prominent state symbol embossed on liquor containers.  The tree is part of the South Carolina flag.  The palmetto was replaced by an intertwining

monogram of the letters “S,” “C,” and “D.”  Those too have been sought by collectors, although lacking the distinctiveness of the earlier versions.

Awash in money, the dispensary became so potent a political machine that it alarmed Progressive-era reformers as well as preachers and their flocks who wanted to ban alcohol completely.  There also were allegations of corruption.  The South Carolina Legislature  in 1904 passed a law that in effect gave counties the option to go “dry” and opt out of the dispensary system.  That was followed by a law in 1907 that abolished the State Dispensary entirely.  Jurisdictions wishing to remain “wet” were allowed to keep their county dispensaries.

By this time Tillman had moved onto the U.S. Senate.  He would be reelected three more times, holding the seat from 1895 to his death in 1918.  Known for his bombastic speeches on the Senate floor, he gained the nickname, “Pitchfork Ben,” after an 1896 address in which he announced his determination to go to Washington and stick a pitchfork into the rump of President Grover Cleveland -- a sizable target.  The South Carolina senator subsequently was barred from the White House.

In 1916 South Carolina voted the state completely “dry.”  The remaining country dispensaries, grown prosperous by their monopoly sales, were shut down.  That event marked the end of Tillman’s unique experiment in regulating the liquor trade though complete state control. 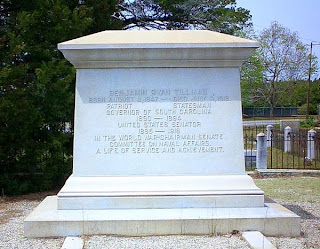 It would also proved to be the last time any state would require that all forms of alcohol sold within its borders had to be bottled by its own officials and dispensed through its own stores.

Benjamin Ryan Tillman is buried in Ebenezer Cemetery at Trenton, Edgefield County, South Carolina.  His gravestone marks his service as Governor of South Carolina, United States Senator, Senate Chairman of the Committee on Naval Affairs during World War One, and commends his record as “a life of service and achievements.”  Nowhere, does it mention that one of those achievements was the creation of the South Carolina State Dispensary, “Ben’s Baby.”

Posted by Jack Sullivan at 7:35 AM