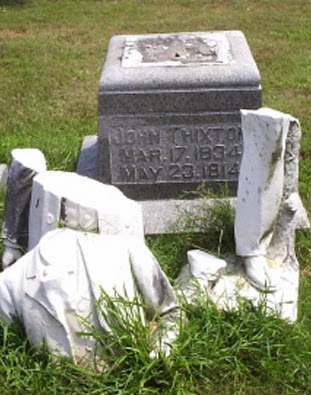 Shown here is what remains of the graveyard statue of John Thixton, a marble likeness that lies shattered in Rosehill Cemetery in Owensboro, Kentucky.   Said to have been destroyed in a tornado,  it memorialized a man who achieved a great deal in his lifetime as a distiller, banker, and politician.   He did not deserve to be reduced to a pile of rubble.

Thixton was born in Jefferson County, Kentucky in March 1834.  His father, also named John, was a native of Maryland who came Kentucky and resided there until his death. reportedly working in banking and operating a brokerage house. Young John was one of six Thixton children, five boys and one girl.  He was well educated for those times, attending school until he was 20 years old and then teaching school.  Ironically, during the same period he was also selling tombstones.

When he was just 21 he married.  She was Mary Ellen Murphy of Daviess County, Kentucky, the daughter of Daniel Murphy and Harriett Kelly ,  and the same age as her husband when they wed.   Attempting to earn a better living for his family,  Thixton quit teaching and went into farming.  After ten years working the land, he apparently decided that other pursuits held more promise for his family, that eventually would number seven children. In 1865, therefore, he sold his farm and moved to Owensboro and engaged in the grocery business, with a strong emphasis on whiskey sales.  In January 1881, according to a contemporary biography, he sold out his grocery to give full attention to selling whiskey.

With a partner named Slaughter, he took over a liquor business on West St. Ann Street.  The partners succeeded Dr. A. D. Hill, who had owned the oldest wholesale house in Jefferson County.  They bought his stock and sold brands of whiskey being distilled in Daviess County.  Even an 1878 fire at their establishment did not daunt the partners who quickly repaired the damage.  An invoice dated Sept. 1, 1882, showed the capital in their liquor dealership to be worth $87,000, chiefly in the value of whiskey.  Their sales amounted to a substantial 150 to 200 barrels a month.

The John Thixton Distillery Company,  another enterprise of the partners, was incorporated in 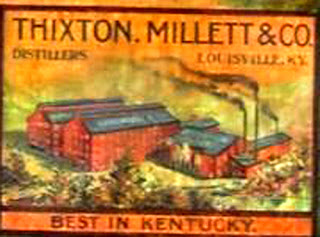 February 1881.  This distillery was situated about a mile east of the Owensboro courthouse and was constructed at a cost of $18,000,  incorporating all new buildings and equipment.  The mashing capacity was 280 bushels a day and the facility turned out an estimated 6,500 barrels of whiskey a year.  Thixton was the chief distiller.   About 1902, with Slaughter apparently gone from the scene, Thixton took a new partner, teaming up with E. P. Millett, who recently had sold his own Kentucky distillery.  Together they formed Thixton, Millett & Company, a wholesale and distiller’s agent concern,  located on West Main Street in Owensboro. 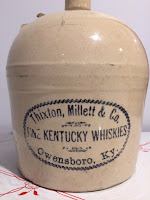 Thixton and Millett also were looking for an opportunity to purchase a second distillery and thus obtain an assured increased supply of whiskey.  That chance came in 1903 when Boone & Bro. distillery, located in Nelson County two miles east of Bardstown, Kentucky, was offered for sale. That facility

was owned by Charles H. Boone and his brother, Nicholas, distant cousins of the famed Daniel Boone.  Insurance underwriter records of 1892 described the Boone distillery as being of frame construction.  It had a single bonded ironclad warehouse located 125 ft north of the still. A cattle shed stood 50 feet east of the still house.

In truth the distillery was little more than a barn, with the Boone brothers buying local grain from which they produced liquor they sold only locally.  At the time Thixton, Millet bought the facility it  reportedly had the capacity to mash about 70 bushels of grain a day and a warehouse capable of aging up to 1,200 barrels. The partners lost no time in expanding the distillery,  seen above in an illustration.  Within two years the mashing capacity had been significantly increased and a new warehouse had brought storage capacity up to 2,600 barrels.  From a small local operation

Thixton and his partner made the facility a liquor producer of regional and even national importance.

The partners sold their whiskey in wholesale quantities in large ceramic jugs and in glass bottles at retail.   Their distillery ownership also made it possible for Thixton, Millett to offer a number of whiskey brands.  They included “Thixton V.O.,” “De Soto,” "Hurdle Baltimore Rye," “Finnegan’s,” “Idlebrook,” and “Old Wagner.”   Their flagship label was “Old Boone,” a name they had bought with the distillery.  Shown here is a sign that the company provided to saloons carrying Thixton, Millett liquor that depicted Daniel Boone himself sitting in front of a primitive (and misspelled) Old Boone Distillery, a dog at his feet.  Variations of that  same image were part of shot and highball glasses the company issued to advertise their brands.  Thixton and his partner also presented favored saloons with back of the bar bottles, as shown here. 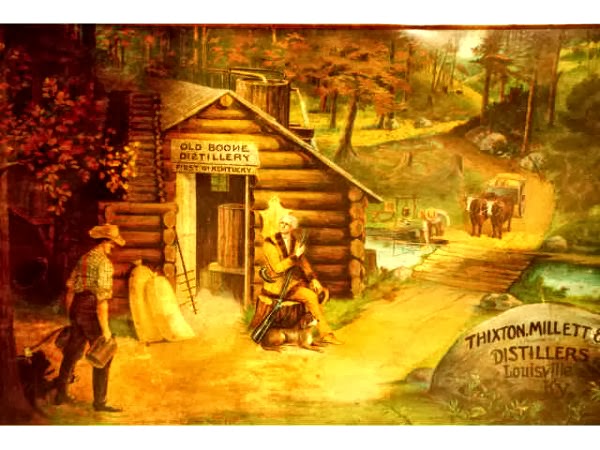 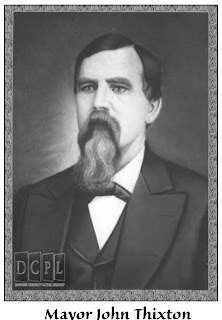 While he was growing his whiskey trade,  John Thixton also was attending to the banking business he is reported to have inherited from his father.  An 1888 bank directory listed him as the president of the Owensboro Bank of Commerce.  A member of the U.S. National Bank system, it was recorded as having assets of $95,000, more than $2 million in current dollars. Thixton also was having a political career.  In 1877 he ran for mayor  of Owensboro, apparently his first attempt at public office, and won, beating out a sitting city councilman.  He served two years in that position, apparently declining to run for a second term.

Meanwhile John’s personal life knew tragedy.  His wife Mary, the mother of his seven children, died in 1876 at the age of 42.  They had been married for 21 years.  Her death left him a widower with several young children to raise.  He was remarried six years later to Fannie G. Dickinson.  He was 48 years old; she was 21 and two years younger than his eldest son, Charles.  Fannie would outlive John by 38 years. 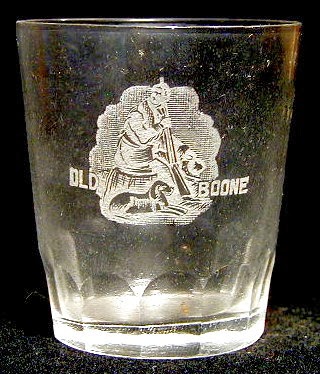 Even as Prohibition forces increasingly began turn states and localities “dry,” Thixton and his firm continued to expand.  In 1912 Thixton, Millett  acquired the Old Saxton distillery in Chicago, Kentucky.  They created a state-of-the-art facility there with a grain elevator, bottling house and cooperage shop where production of “Old Boone” continued.  They also opened a sales office in Detroit in 1914.  That same year John Thixton died at the age of 80.  While his children and widow  grieved at his graveside, he was interred in Owensboro’s Rosehill Elmwood Cemetery. The Thixton family erected a statue in the image of John on the family plot.

The liquor business that Thixton had founded and grown into national stature was taken over by his son Charles, who had been inducted into the firm’s management as he came to maturity.  Charles appears to have been a competent businessman but the coming of Prohibition caused Thixton, Millett & Company to cease operations in 1919. The firm’s Kentucky distilleries were shut down and the “Old Boone” brand of whiskey disappeared.

Although cemetery authorities say it was a tornado that destroyed the statue of John Thixton on their grounds,  I am skeptical.  The ruins look more like rampant vandalism than a storm.  For myself, I would have relished seeing the image of John Thixton, a man who developed three distilleries while managing a bank and serving as mayor of his town.  Surely he deserves more than a ruined monument.  That is why as a signature illustration here I have included the imposing Thixton plinth that stands over the entire family plot.  Without John and his accomplishments it would not be there. 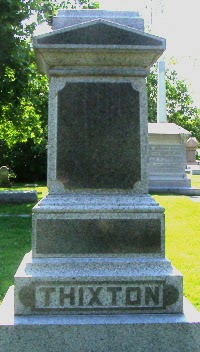 Posted by Jack Sullivan at 8:06 AM