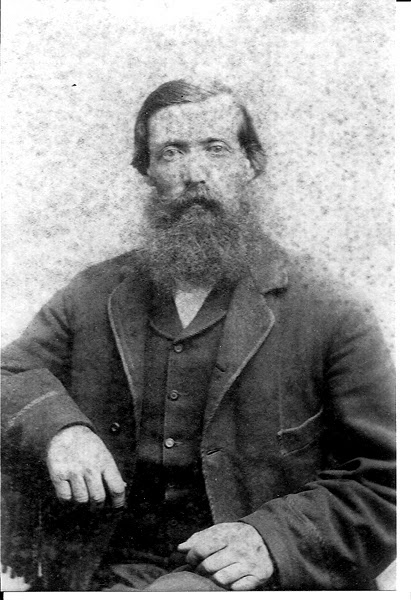 Although in his lifetime John Hoen Vandegrift owned three Pennsylvania distilleries, his true passion was for carpentry.   That did not interfere with the quality of his whiskey, counted among the best.  Created with the care and precision of the carpenter, his liquid products seemingly had no rough edges and a smooth finish.

Vandegrift, shown here in young manhood, was born in Fredericktown, a village in Washington County, Pennsylvania, in 1827.  He was the son of Edith Green Vandegrift and James Vandegrift.  His mother was of English heritage, said to be a direct descendant of Nathaniel Greene, the Revolutionary War general and hero.  Father James, shown here, was of Dutch 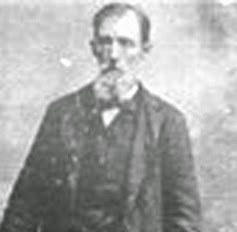 descent.  He had been a seaman, taking shipments of lumber from Pittsburgh to stops down the Ohio River to the Mississippi and ending at New Orleans before making the trip back to Pennsylvania. At some point James decided to settle down in Fredericktown and open a lumber mill.

Thus, John Vandegrift was exposed as an early age to the lumber business and the craft of the carpenter.   It appears he was working at that trade when in 1851, according to census records, he married Mary Jane Ford, a native Pennsylvanian.  He was 24, she was 20.  The 1860 census found them in Fredericktown, a small municipality located in a valley along the Monongahela River.  By that time they had a eight-year-old daughter named Edith.  They later would have two more children, Mary and John. The census gave Vandegrift’s occupation as “millwright.”

Whether driven by a wanderlust or a desire for riches,  about 1869 Vandegrift packed up his wife and child and with his brother, James, headed for the gold fields of California.  The decision could not have been an easy one.  Shown here is a 1869 handbill advertising ships sailing from New York to San Francisco.  Note that the passage could take 118 days as the ship rounded the “Horn” of South America and headed north to its final docking. The voyage was daunting, arduous and often dangerous. Yet the Vandegrifts braved it, heading to a California boom town named Snake Flats where they staked a claim.

Although by the time of their arrival the California Gold Rush was in its final, lingering stages, the plot worked by the Vandegrift brothers seems to have been a productive one.  Their success, however, gained them unwanted attention.  They were attacked by Mexican bandits and during the skirmish James Vandegrift was killed.  His brother’s death fell hard on John who quickly determined to go back to Pennsylvania and Fredericktown.

Soon after returning, apparently using the wealth he had gained in California,  Vandegrift began to invest in the liquor trade.  Bonfort’s Directory of 1875 records his firm as “John H. Vandegrift & Bro.,” located in East Bethlehem Township of Washington County. That name raises something of a question:  Was “& Bro.” chosen in memory of John’s fallen sibling or did it refer to a second brother, Jesse, who had been working with their father at the lumber mill?   In any case, before long Vandegrift was operating distilleries in Fredericktown, an area now known as Vestaburg, as well as at Allenport and Monesson, two other small towns along the Monongahela River. 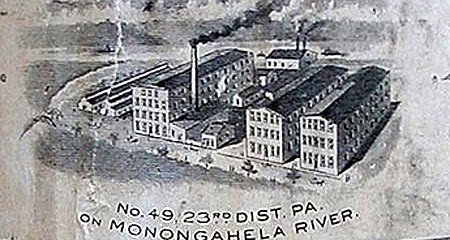 An illustration from the label of one of his whiskeys purports to shown the Fredericktown distillery which appears to have three large warehouses,  one of four stories and two of three, with a total storage capacity advertised as 23,000 barrels.  Low buildings on the left side of the picture suggests

that Vandegrift, like many distillers of his time, was fattening cattle on the premises, using the spent mash as fodder.  Following are two actual photographs of the distillery, perhaps less “romanticized.”  The first seems to show the distillery itself; the second a warehouse.

Note that the distillery was designated “No. 49, 23rd Dist. Pa.”  That alone is a strong indication of the care Vandegrift was taking

with his product.  He was participating in the Federal effort to bring more quality to American whiskey through its “bottled in bond” program. That meant accepting government inspectors and more paperwork in return for some distiller tax breaks.  Distilleries participating were considered premier producers.  Warehouse records for the Vandegrift distillery show major transactions in 1898, 1901, 1904, 1914, and 1920.  Indications are that these actions involved both insertions of whiskey (in barrels) into the warehouse as well as withdrawals for the purpose of bottling and sales.

In a 1905 letter published in the Wine & Spirits Journal,  Vandegrift discussed his production within the context of the bonding process.   He explained that the stocks of his whiskey were at a low point with only 11,000 barrels in bond.   The high cost of raw materials had limited his production for the past two years, he said, and as a result the amount of aged whiskey being released for sale would be “less than what will be required to meet the fixed consumption of Vandegrift.”  He nevertheless stated that his firm would maintain the value (quality) of the production and urged wholesalers to continue to place contracts on his bonded whiskey. 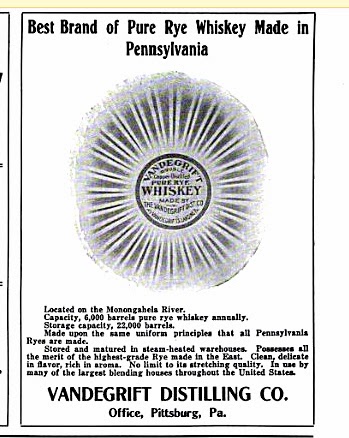 Vandegrift’s advertising shown here, also from the Wine & Spirits Journal , stressed that his whiskey was “Made on the same uniform principles that all Pennsylvania Rye are made.  Stored and matured in steam-heated warehouses.  Possesses all the merit of the highest-grade Rye made in the East.”  Vandegrift also was selling to “rectifiers,” that is, dealers who were blending and compounding whiskeys to achieve a specific taste, sometimes diluting it with pure alcohol.  His ad assured them that there was no limit to the “stretching capacity” of his product.

In addition to these bulk sales,  Vandegrift was also bottling and selling whiskey at retail.  Shown here, the label of his 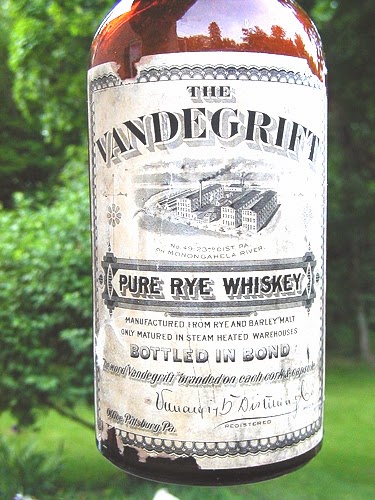 quarts read:  “Manufactured from rye and barley malt,  only matured in steam heated warehouses.  Bottled in bond.”  The indicated level of his sales, apparently from 6,000 to 7,000 barrels annually, suggests that Vandegrift’s operation, while not huge by Pennsylvania standards, was more than boutique, with a growing customer base that warranted him eventually opening an office in nearby Pittsburgh.

As he grew older Vandegrift began to turn the reins of distillery management over to his son, John.  He retired to pursue his first love, making things from wood.  The 1900 census found him, now age 70, living with Mary and with his son John, at 31 still a bachelor, in the household.  The father’s occupation was given as “carpenter”; the son’s as “distiller.”   Although Vandegrift kept ownership of the distilleries,  his son knew that he would inherit a half interest upon his father’s death.  Tragically, John, now married, preceded his father to the grave.  In 1908 at the age of 39 he was killed, according to his death certificate, by “blunt force trauma,” hit by a train.  The elder Vandegrift, now almost 80, returned to run the distilleries.  But only briefly. In 1909 Vandegrift died at Fredericktown.  The diagnosis was “chronic nephritis,”  kidney disease leading to renal failure. 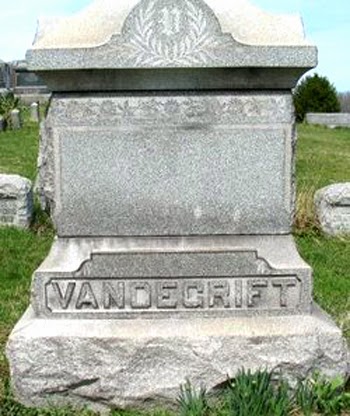 With his grieving daughters and grandchildren standing by his burial site, John was lowered into Grave No. 1, Section P, Lot EH280.  Next to him in Grave No. 2 was his wife, Mary, who had died in 1900.  Nearby is the gravesite of their son John.  A plinth marking the burial plots of the Vandegrift family stands in the Beallsville Cemetery, located in Washington County where family members had spent most of their lives.

Despite the lack of Vandegrift heirs to run the distillery, the business continued until 1920.   Descendants are not sure who was at the helm of the company in later years.   It may have been sold by Vandegrift’s daughters.  With the advent of National Prohibition the firm’s  managers sent a distress message in June 1919:  “Liquor dealers...Owners of certificates for Vandegrift Pure Rye communicate with distillery at once.  Whiskey to be transferred.”   As would be evident later, certificate holders who were slow to get their whiskey would find it confiscated by the Federal Government after the imposition of National Prohibition in 1920. 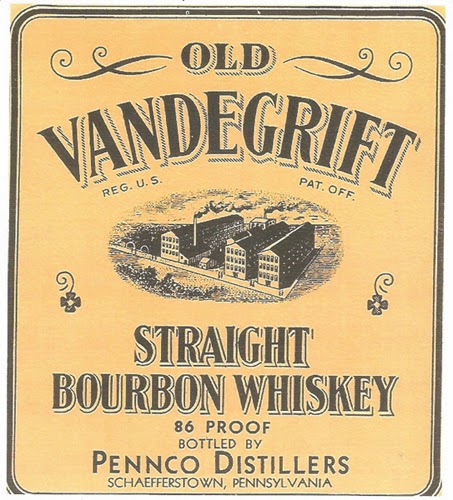 A fire in 1925 destroyed the shutdown Fredericktown facility. Either earlier or subsequently the Pennco company purchased the property and continued to produce and sell “Old Vandegrift” in the post-Prohibition era.  That offers further testimony to the quality of whiskey that the Fredericktown carpenter had produced.  With the subsequent purchase of Pennco, the brand disappeared.  But not from total notice.  In 1972 a man named John Bowers sued the United States Government on the grounds that 25 barrels of 100 proof pure Vandegrift rye whiskey that his father had purchased in 1918 had been seized by the Feds and had been held in a Philadelphia warehouse ever since, despite repeated post-Prohibition attempts by the family to have the whiskey returned.  A Federal Court judge dismissed the case citing lack of jurisdiction but, with a sense of humor, regretted that he was thereupon deprived of “viewing the physical evidence of 25 barrels of 58 year old 100 proof Pennsylvania pure rye whiskey.”  And perhaps sipping a bit.

Because whiskey does not deteriorate with time, that taste would have been a highly rewarding one.  So far as I know, Vandegrift’s rye whiskey may still reside in a government warehouse, still bearing that stamp of quality.   As for the Fredericktown carpenter and distiller,  the last word about him appropriately should come from a 1925 “History of Washington County.”  Discussing John Vandegrift, the author asserted:  “This was one of the old time distillers on the Monongahela River [who] helped make rye famous the world over.”

Note:  This vignette would not have been possible without the assistance of two women who bear some kinship to John Vandegrift.   Kay Vandegrift, related through her husband, was pursuing genealogical interests and came upon this blog.  In an email she outlined Vandegrift’s story, which I immediately found of interest and began further research.  Kay directed me to Debbie Blinkhorn,  her husband’s cousin and a direct descendant of John Vandegrift’s sister.   Debbie has been of great help in providing additional information, answering questions, and providing photos of the family and the Vandegrift distillery.  I am indebted to them both.

Posted by Jack Sullivan at 9:02 AM