The Becks of New York Pioneered in Paris

Joseph Beck & Sons were not the only whiskey men to display their wares at the Paris Exposition of 1900, but the New York City distiller/rectifiers appear to have been the smallest company among the pioneering fourteen exhibitors who made “so fine a showing,” won a plethora of medals, and early on brought American whiskey aggressively to the attention of the European Continent.

According to the letterhead shown above, Joseph Beck & Sons was founded in New York City in 1866, just after the conclusion of the Civil War.   At some point Beck took two of his boys into the business with him.  Local business directories listed Joseph as president, son Max was treasurer and secretary, and son Albert, a manager and company director. 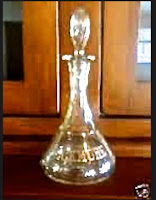 The Becks advertised themselves as “distillers and rectifiers” (i.e. blenders).  In addition to “Goose Gin”  they featured two brands of whiskey, “Belle of New York” and “Beckmore Rye,” the latter their flagship label.  Shown here is a flask with Beckmore embossed across the front and an elaborate back-of-the bar bottle with that name in an etched gold label.  “Beckmore” was also the company’s cable address.   Although several street addresses were listed for the firm over time, the firm likely was located at 133 Reade Street when the Becks made their potentially risky financial leap to create a display at “Exposition de Paris de 1900.”

That World’s Fair had been announced by the French government as a celebration of the dawning of the Twentieth Century.  Countries from around the world were invited by France to showcase their achievements and products. The hosts emphasized that the Exposition would feature a learning atmosphere aimed at increasing inter-cultural tolerance, a good atmosphere for the upstart Americans to show off their wares to the Europeans.  Shown here is the cover of the official program for the fair, displaying the "art nouveau" style that was all the rage at the time. 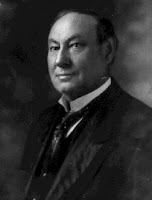 An official of the U.S. Department of Agriculture named Dr. H.W. Wiley, considered an expert on wine and liquor, decided that the Paris Exposition was a perfect time to show Europeans the decided benefits of  American made alcoholic beverages.  Using his many contacts in the liquor industry, Wiley, shown here collected commitments from fourteen “leading houses”  to submit their whiskeys for exhibit in Paris.  Those were housed in the United States pavilion, sponsored by the U.S. Government under the auspices of the Agriculture Department.

We can imagine some or all the Becks making a trip to France in order to supervise and view their exhibit.  Journalist James Boyd described the setting they would have experienced:  “On leaving the Swiss Pavilion, the United States section lay to the left.  It occupied almost the whole length of the palace, and was surrounded by a vast arcaded gallery, similar to the marketplace at San Francisco. To the right and left of the entrance were bells of liberty, reproductions of the bell being sounded on the opening of the War of Independence.  The large doorway was ornamented with flat, heavy pylons, and surmounted by the American eagle.”   Boyd described the exhibit cases inside as containing “various products of the soil.”  This included whiskey. 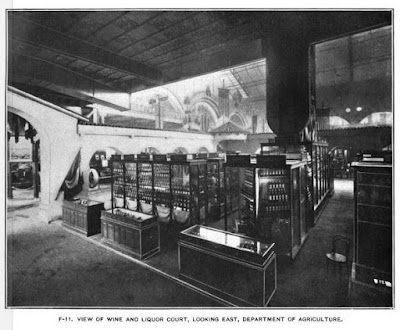 As shown above, Wiley had organized a large “Wine and Liquor Court” within the U.S. Pavilion, featuring a number of large cases stacked with labeled containers. Considerably more elaborately installed than those containing wine, the whiskey exhibits were displayed in two “handsome” cases, each six feet square and eight feet high and facing on the two main isles.  While some ten distillers displayed their wares together in Case 108., the Becks had invested in a much larger exhibit and shared Case 107 with only two “big hitters” in the industry, H. B. Kirk & Co. of New York and J. W. McCulloch of Owensboro, Kentucky.  [See my post on McCulloch, April 2014.]  The Becks’ exhibit featured rank after rank of the company’s flagship brand, “Beckmore.”

In his final report on results of the Wine and Liquor Pavilion, Dr. Wiley had this to say:  “Some of the best brands of rye and indian-corn whiskey made in the country were on exhibition and all the whiskies were of exceptional high quality.  This exhibit has the unique merit, I believe, of being the only one containing more than one display in which every sample secured an award.  One-third of the samples received gold medals and all the others silver or bronze.  The whiskey exhibits were most attractively arranged and commanded a great deal of attention.” 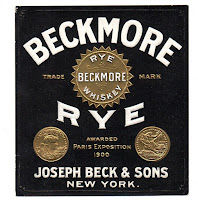 Among the prize winners was Joseph Beck & Sons.  They were awarded a medal for “merit and quality” for their Beckmore brand whiskey, bestowed by the tasting judges of the Paris Exposition.  It is unclear, however, if this award represented a top ranked gold medal, or a lesser silver or bronze. The rank apparently made no difference to the Becks.  They made the success of their Paris excursion a centerpiece of their subsequent merchandising, displaying the honor on their letterhead, whiskey labels, and advertising it on shot glasses given to favored customers.

The Beck family’s prize-winning Beckmore Rye also resonated with the fanciest restaurants in New York City.  At the Terrace Garden Restaurant, located at 58th Street and Lexington Avenue, Beckmore Rye was the first whiskey to be recommended to diners.  A shot cost fifteen cents, equivalent to $3.75 today.

Unfortunately the Exposition itself had not been a financial success; only about two-thirds of the expected public attended. It had been so expensive to build the elaborate pavilions and to operate them that the cost per visitor ended up about six hundred francs more than the price of admission.  This lack of attendance may have been in Dr. Wiley’s mind when he cautiously summed up the final impact of the Becks' and other whiskey exhibits:  “Whether or not the exhibition of our whiskies will command a European market will be a matter for the future to decide, but it is gratifying to our distillers to know that so fine a showing was made and so much attention called to this project.”

Fast forward a decade.  During ensuing years Congress had passed the Food and Drug Act of 1906 and Dr. Wiley had become the head of what is known today as the Food and Drug Administration.  Ironically, in that role he took dead aim at liquor “rectifiers” like Joseph Beck & Sons.  Wiley’s position, shared by some distillers and political figures, was that blended whiskeys were “imitation” and that only “straight” bourbons and ryes qualified for the name “whiskey.”  This battle would be fiercely fought out in Washington, D.C., until 1909 when President Taft declared that all whiskey is whiskey, a ruling that has held to this day.

In New York City, now located at 85 Ninth Avenue, the Becks must have been much relieved by the decision.  Their whisky blends had been legitimized, despite Dr. Wiley and his allies.   According to city directories, the Becks continued to sell liquor in New York City until at least 1911.  After that the trail goes cold and the assumption must be that the Becks terminated their business interests.

Although Dr. Wiley in 1901 was cautious about the impact of the Paris Exposition exhibits, U.S.-made bourbon and other whiskeys subsequently gained a strong customer base throughout Europe.  By joining those early whiskey makers who saw opportunities abroad, the Becks had been instrumental in initiating that process.  America honors her pioneers. In a real sense, the Becks were pioneers.

Note:  This post is deficient in personal details about the Becks, father and sons.  The number of Joseph Becks in NYC from census data was more than 4,000. Lacking information about birth and death dates it became virtually impossible to find out more.  I am hopeful that a Beck descendant will see this post and help me fill in the blanks.