Call it the ultimate irony:  A saloonkeeper killed by a drunken driver.  Sadly, that was the fate of Martin Lynch of Bristol, Virginia and Tennessee, shown left, a man who owned two saloons and was the source of regionally popular whiskey brands.
Born in May 1876, 1877, or 1878 —  sources differ — Lynch was the son of Eugene and Catherine Lyons Lynch.  His birthplace appears to have been a small Tennessee community about 170 miles west of Bristol.  It was called Deer Lodge, a mountain resort town with two hotels, a scattering of houses and a few businesses. Finding it to be too limiting for a young man with ambition, Lynch moved as a young man to Bristol, a city that straddles the state line between Tennessee and Virginia.

As indicated by photo below that shows a row of liquor establishments lining the main street —  Southern Wine & Liquor,  Rambis Saloon, Mail Order Liquor — Bristol was a town teeming with saloons, wholesale and retail liquor dealers, and restaurants and hotels selling alcohol.  Lynch likely served an apprenticeship working in some of the many.  He first surfaced with his own establishment about age 31, owning and operating a saloon on Front Street.  He subsequently opened a second drinking establishment on Bristol’s State Street. 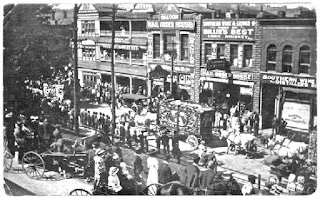 Lynch was also a “rectifier,” that is, blending raw whiskeys and perhaps other ingredients in a back room in order achieve desired taste, color and smoothness.  He bottled this liquor under his own labels and marketed it locally and regionally through mail order sales.   Among Lynch brands were “Green Spring Corn,” “Blue Diamond Corn,”  and Parkwood,”  the last sold as a bourbon but likely was a blend.  His flagship brand was “Cherokee Corn.”  He failed to register any of these names with the Patent and Trademark office.  Lynch used glass containers for his retail sales, ranging in size from gallon jugs to quarts and pint flasks. 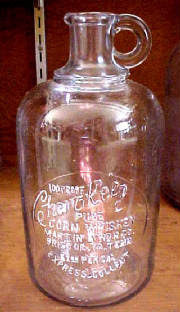 Lynch was finding that running saloons could be problematic.  In May 1911 the local press reported that he had closed up his saloon on Front Street and was consolidating it with the State Street saloon.   In February 1913 the latter establishment was robbed four times, but each time only whiskey was reported stolen.  In 1914, as reported in the local press, Lynch re-opened the Front Street business with both he and his brother, Eugene, listed as managers on the license application.
About the same time Lynch applied for and got a beer license.  By this time prohibitionary forces in Bristol had jacked up the annual cost to $1,000 — equivalent to $25,000 today.  Saloonkeepers had no choice, either buy the licenses or go out of business.

A bachelor until the age of about 37, in 1915 Martin married a woman some sixteen years younger than he.  She was Rosemary M. Willett and their nuptials took place in the Virginia half of Bristol.   Accord to records, the couple had four children,  Catherine, Martin Jr., Joseph, and Mary, who died in infancy.

Like many liquor dealers Lynch was a source of giveaway items to favored customers.  His were generally mini-jugs, as two the shown here.  There was nothing to be given away to appease the forces of Prohibition, however, and little by little avenues of sales closed down.  The final blow came in 1916 when Virginia voted statewide prohibition of alcohol.  Lynch attempted to make a go of the situation by selling “near beer.”  One was Reif’s Special, advertised as a “temperance drink” and “a pure liquid food.”  Reif’s boasted that it had the “snappy flavor and foaming goodness of the hops with the alcohol left out.”  Alcohol substitutes proved unprofitable and Lynch finally was forced to shut the doors of his business.

With his profits from the liquor trade, however, he earlier had purchased a large farm just off Highway US 11, near Bristol. He built a large home there for his family.  He also raised cattle and did some farming.  Thus it may have been natural for him to move from liquor to food.  Martin Lynch is listed in Bristol directories during the 1920s, under the heading: “Butter, Eggs, & Cheese” at No. 27 City Market House. He also appears to have started a dairy, listed as Lynch Dairy, located at several addresses from 1929 into the 1940s.  A 1944 directory lists the Martin Lynch Meat Market at 614 Cumberland Road on the Virginia side of Bristol.

By this time, as shown here, Lynch had been presented with a grandchild by his daughter, Catherine.  This photo of a proud grandparent may have been taken only shortly before his death.  He was killed in an automobile accident in August 1953.   Lynch, now about 75 years old, was turning onto the highway near his home when he was struck by a speeding drunken driver.  He was rushed to Bristol Memorial Hospital where he was declared dead, the cause a “concussion of the brain.”  The other driver was found to be intoxicated but records do not indicate he was charged with a homicide.

As his widow, Rosemary, three children and five grandchildren, and other relatives and friends looked on,  Martin Lynch was laid to rest — a sad and ironic end to the life of a notable whiskey man.

Posted by Jack Sullivan at 6:52 AM