Mort Field of Owensboro Jousted with the “Whisky Trust”

In the era when the infamous “Whiskey Trust” was pressuring Kentucky distillers to join its monopolistic efforts to corner whiskey production and thereby hike prices, J. W. Morton Field in Owensboro, Daviess County, instead took the perpetrators to court and during his lifetime won a judgment against the Trust today worth the equivalent of $1.25 million.

Field (sometimes incorrectly given as “Fields,”) was a native Kentuckian, born in 1844 in Daviess County to Thomas A. and Arabella Morton Field. His father, a farmer, died at the age of 42 when Mort was only three.   With his help and that of another son as they grew to maturity, Arabella stayed on the farm and managed its affairs skillfully and profitably.  The adult Mort moved to Owensboro, the county seat, and likely went to work for one of the many distillers who made their headquarters there, learning the trade.

In 1867 he also found a wife in town, Elizabeth Angeline Hanning, known throughout her life as “Nannie,” the name that was chiseled into her gravestone shown below. She was the daughter of John F. Hanning, a distillery owner in Daviess County.   At the time of their marriage Mort was 22 and Nannie, 21.  They would have three children, Maybelle, born in 1868;  Robert William, 1870; and John Edward, 1873.

It may have been the impetus of a growing family and its needs that caused Field to strike out on his own as a distiller in 1873.  He bought the Old Reed Distillery in Reed, Kentucky, and moved it outside of Owensboro.  He chose a site on a grassy Kentucky slope overlooking a graceful bend in the Ohio River, shown above as it looks today.  At first, Field’s output was small, only about two and one-half bushels of grain mashed daily.  Over time capacity would grow to 250 bushels as the owner added to the facility.  It is shown below as it looked about 1900. 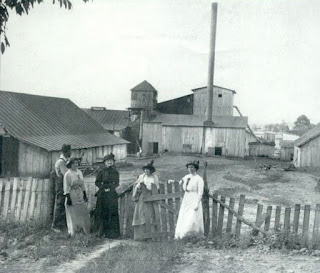 According to insurance records the property included three warehouses.  Warehouse A was frame with a metal or slate roof, located 104 feet north of the still.  Of similar construction, Warehouse B was located just north of A.  Both were bonded. A third warehouse was “free” with a frame and shingle construction located 180 feet northeast of the still.  A fourth frame and shingle warehouse ultimately was torn down.  Field’s property also housed cattle being fed from spent distillery mash.  The cows were sheltered in sheds on the west side of the still house. 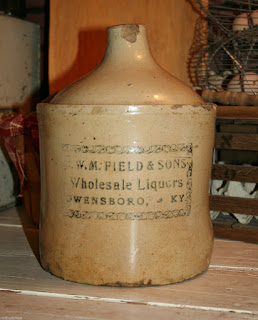 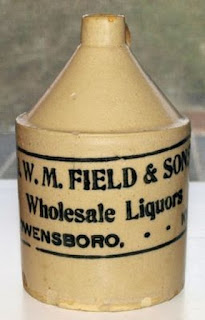 As his sons, Robert William and John Edward, matured, Field took them into the business, changing the name of his firm to J.W.M. Field & Sons.  He advertised his firm as “Wholesale Dealers in Pure Kentucky Sour Mash Whiskey. ”  Field was selling his product to saloons and restaurants in a series of ceramic jugs, from quart to several gallon sizes.  Over the almost four decades the distillery was in business, a variety of designs were employed, as shown by those displayed throughout this post.  Field also provided customers with giveaway smaller containers, including mini-jugs holding just a swallow or two of whiskey and a half pint with an Celtic cross design.  Those would be gifted to saloonkeepers, bartenders and other favored patrons. 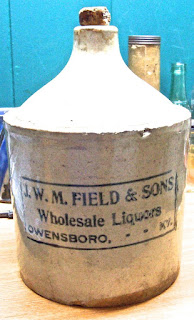 Field rapidly gained a reputation for producing good whiskey.  The Louisville Courier-Journal, a respected newspaper, hailed him as a distiller solidly in the tradition of the best Kentucky whiskey.  “J.W.M. Field is not a ‘progressive’ distiller,” the paper stated, “that is, he knows absolutely nothing of the modern processes by which the quantity of the yield is vastly multiplied…”  — at the expense of quality.  Field’s marketing reflected that old fashioned approach, advertising that he featured only one brand and that he made only “straight goods” — no mixing or blending as rectifiers did. 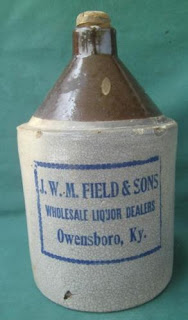 While Field was making whiskey in the traditional mode, however, the industry rapidly was changing around him.  Big moneyed interests from the East were taking a serious look at the distilling industry as a lucrative investment.  Among them were the Paris, Allen Co., located at 45 Broadway in New York City.  Originally importers of wines and liquors from abroad, company executives began to look to Kentucky for business opportunities. 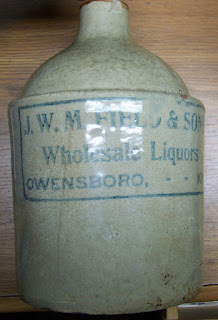 In 1887 the New York firm bought a controlling interest in W. A. Gaines and Company, a Kentucky distillery that had originated in the 1860s and was producing well-known brands like “Old Crow” and “Old Hermitage.”  While retaining some Kentucky whiskey men as directors, Allen became president and another wealthy investor, Edson Bradley, became vice president [see my post of Sept. 2011 on Bradley].  Almost immediately upon joining the distillery Bradley became the principal spokesman for the New York money men and represented their interests on Wall Street and in the halls of Congress. 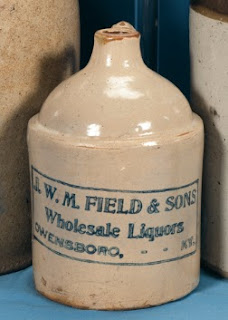 Before long Eastern investors realized that because distilleries had proliferated in Kentucky and nearby states, resulting in vigorous cost competition, their ability to realize a windfall profit on whiskey was in peril.  This was still the era of monopolies and the boys at Paris, Allen decided that the best way to increase liquor prices was significantly to control and reduce production.  Traditional distillers almost certainly were unaware of the ultimate intentions of the New Yorkers.  As a result when Paris, Allen in 1899 offered Field what turned out to be  “a devil’s bargain” he took it.

This was the deal:  The New Yorkers agreed that they would contract to buy 3,000 barrels of whiskey from J.W. M. Field & Sons over the next five years and then, under specified conditions, an additional 5,000 barrels annually over the next ten years.  In addition to this contracted production, Field could produce only 500 barrels more for his own use and sale.  If Field exceeded that amount, he would have to pay Paris, Allen a penalty of $5 per barrel.  Believing that there would be a great advantage in having a guaranteed customer for his whiskey for 15 years,  the Owensboro distiller agreed. 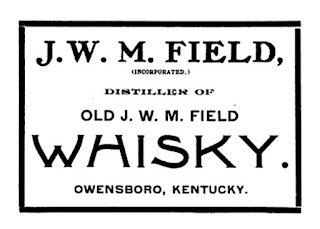 Field initially failed to recognize that Paris, Allen’s pact with him was part of a larger scheme to corner the Kentucky whiskey market, reduce production markedly and hoist prices.  It did not take long, however, before he realized that something was afoot.  When Field about 1901 decided to incorporate, Paris, Allen strongly objected, apparently fearing that the move would put his distillery out of their control.  By this time the Easterners had moved toward creating their “Whiskey Trust,” an organization they called the “Kentucky Distilleries & Warehouse Company.”  Despite the prior failure of a Peoria-based trust, Paris, Allen moved aggressively to rope in Kentucky distillers to their scheme, often offering them stock in exchange for shutting their plants down.  As a result, the Trust soon controlled a number of distilleries and brand names. 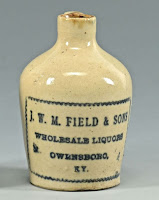 Some Kentucky distillers had begun to balk at the idea of a whiskey monopoly.  Field was among them.  When Paris, Allen demanded he agree to transferring his contract to the Kentucky monopoly, he said an emphatic NO.  There ensued a year of correspondence that a court later characterized as showing “the Kentucky Company, taking advantage of trivial and technical mistakes”  and not dealing with the root of the contract.  In order words, the men behind the Trust were acting in bad faith and fully intending to keep Field’s whiskey out of the marketplace.

Moreover, in retaliation for Field not signing up with the Kentucky Company, Paris, Allen refused to take any more of his production, leaving the Owensboro outfit “high and dry.”  The mastermind behind this strategy likely was George H. Allen, a man hailed by some for his “native shrewdness and energy” and excoriated by others for his ruthless business practices.  Seemingly left no other choice, Field sued in 1902. 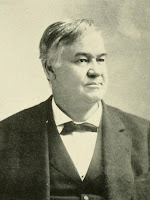 In the effort he had the wisdom to hire as his attorney, William Lindsay, a former chief justice of the Kentucky Supreme Court, shown left.  Although the suit was filed in the U.S. Circuit Court in New York, not in Kentucky, Lindsay persuaded the jury to give the distiller a judgment for damages against Paris, Allen in the amount of $50,000 (equiv. $1.25 million today).

Although J.W. M. Field & Co had won, the joy of victory was short-lived for Mort Field.  In August of 1903, he died at the age of 58.  With his widow and children grieving at his graveside he was buried in a Daviess County cemetery.  His and Nannie’s monument is shown below. Moreover,  family elation at having beaten the Whiskey Trust was short-lived when Paris, Allen appealed the decision to the U.S. Circuit Court of Appeals.  This time Lindsay was not as effective. That panel decided that the whiskey the Fields could not sell and had stored in their warehouses actually was an asset, gaining value as it aged.  Thus no damage had been done to the Owensboro distiller.  The court nixed the payment and called for a new trial.  There is no evidence that it ever occurred. 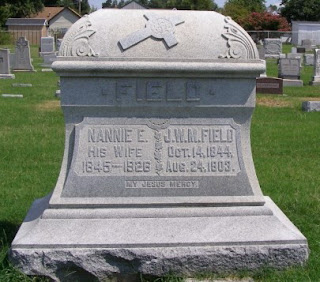 The distillery Field had founded survived his passing, managed by family members.  The officers became sons Robert W. as president and John Edwin as vice president, with other relatives in corporate roles.  By 1915, John Edwin had advanced to the presidency of the company.  He ran it until closed by National Prohibition.  Meanwhile, the Kentucky Distilleries & Warehouse Company was continuing to operate out of Louisville.  Never able to establish the desired monopoly and drive up Kentucky whiskey prices as dreamed of by Paris, Allen, the hollow shell of the Trust nonetheless survived until Prohibition.  Neither whiskey outfit reopened after Repeal.