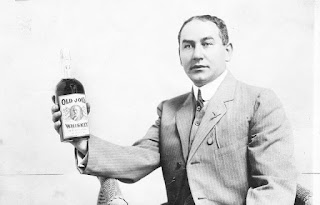 The nattily dressed young man shown above is David Feltenstein, a well-known and prosperous whiskey man in St. Joseph, Missouri.  In his hand is a bottle of his flagship brand, one he called “Old Joel,” whose label included the portrait of an elderly bearded gentleman.   Who was Old Joel?   Feltenstein knew, but few customers did.

Feltenstein had not always known the affluence he attained as a successful wholesale, retail, and mail order liquor dealer.  He was born about 1873 in New York City of Russian Jewish immigrant parents.  The family lived in on Manhattan’s lower East Side, the dwelling place for many newly arrived in America with little money.  Like many Jewish arrivals, David’s father was a peddler, selling merchandise on the street and going door to door.  Shown below is a Jewish peddler making a sale on a New York sidewalk. 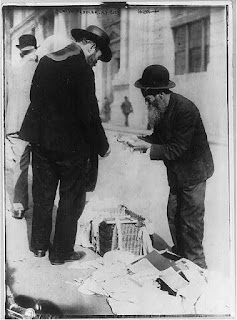 From a 21st Century prospective, idea of peddling seems curious, if not downright demeaning,  Nevertheless, it was a normal way of life for many Jews from Russia and Central Europe.  The men who immigrated to America took up peddling almost as a matter of course, says one author, adding:  “A distinctive way of making a living, peddling required that the man–since in the United States women nearly never engaged in it—knock on doors, go up to the homes of each one of his customers, cross their thresholds, communicate with them in their own language and develop a pleasant enough manner to convince them to buy something. It necessitated that the would-be peddler learn enough of the local language or languages to be able to communicate with women and men often very different from him.” 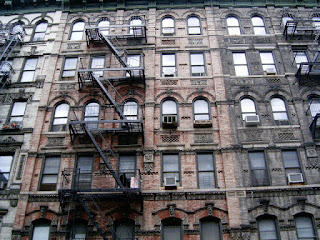 The 1880 U.S.Census found the Feltensteins living in an apartment at 30 Essex Street, one of the avenues that defined the boundaries of the Lower East Side.  Their building likely resembled the tenements shown here.  The father and mother, both 43 years old, were raising a large family on a peddler’s income.  The oldest child was Betsy at 18 years, followed by Sarah,10.  Then came four boys, Isaac, 8;  David, 7;  Alexander, 6;  and Moses, 4. There also was an elder son, Abraham, and two children, Jacob and Hannah, born after 1880.  As he grew up, David almost certainly learned the value of hard work from his father, as well as frugality and personality traits to convince customers “to buy something.”  His father’s name, as you may have guessed, was Joel.

With his boyhood spent in what many considered the slums,  Feltenstein had only limited education, telling a census taker that he had left school to go to work after the eight grade. When he was about 20 years old David moved to St. Joseph, Missouri.  He likely made the move at the suggestion of Feltenstein relatives who already lived in the Missouri River town, a “jumping off point” for many heading West.  In St. Joseph at the age of 23 Feltenstein found a bride in Rae, also given as “Ray,”  herself the offspring of Russian Jewish parents.  She was 18 when they married.  The 1900 census found them living in St. Joseph’s Third Ward with one son, Harry, 2 years old.  Feltenstein’s occupation was given as “Merchant, D.S.,” likely meaning “distilled spirits.”

Exactly when Feltenstein founded his liquor dealership cannot be determined, but his business first showed up in St. Joseph directories in 1902, located at 315-319 Edmond Street.  That would be his location for the life of the company. In addition to naming his flagship whiskey “Old Joel,”  David demonstrated other ways of saluting his heritage.  Outside his establishment he kept a cart similar to those that peddlers would push though the streets of New York, crying out their wares.  The sides of the cart advertised “Old Joel Whiskey.”  Note too that outside his store Feltenstein had a line of barrels on the sidewalk, reminiscent of peddlers spreading out their products for passersby. 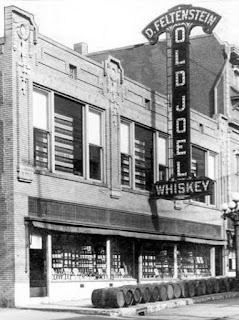 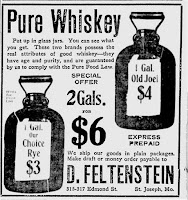 Feltenstein advertised his whiskey vigorously.  An 1910 ad emphasized that he packaged his brands in gallon glass jars.  These had been made possible by the invention of the Mike Owens bottling machine not long before.   He offered two brands, “Old Joel” at $4 a gallon and a cheaper “house” brand rye for $3.  He also was advertising as “The Old Reliable Mail Order Liquor House,” taking advantage of the many states and localities that had gone “dry” but could still receive interstate express deliveries of liquor.  In addition to his “Old Joel” proprietary label, Feltenstein offered a number of nationally known brands, like “Old McBrayer” “Guckenheimer Rye,” and “Old Oscar Pepper.”  A buyer ordering four quarts of liquor would receive prepaid express charges. 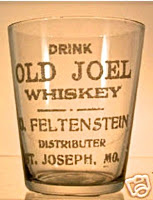 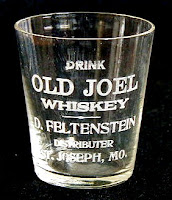 Like other whiskey dealers of his time, Feltenstein issued giveaway items to favored customers like saloon owners and bartenders.  Two shot glasses shown here prominently advertised “Old Joel.”  Interestingly, the glasses indicated that D. Feltenstein was the “distributor” of the brand.  This reference may indicate that the company was not doing its own rectifying and bottling but relying on outside sources.  It also is interesting that Feltenstein never trademarked his “Old Joel” brand. 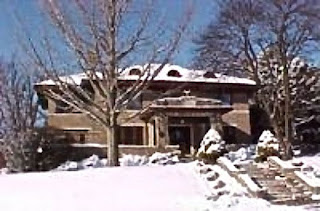 As Feltenstein’s wealth increased, so did his family size. In the 1910 census when he was 37, David and Rae’s children had increased to three, joining Harry, now 12, was Gerald, 8, and Edward, 3.  Their father determined to build them a new home.  Designed by Architect Rudolph Meyer, it was a two story brick and stone dwelling in the designated “Prairie Style.”  At the beginning of the 20th century, Frank Lloyd Wright had introduced this distinct new architecture, expressing the flat, sweeping prairie of the Midwest. Created to meet Wright's objectives of a simplicity and integrity that combined comfort, utility and beauty,  Shown here and still standing, Feltenstein’s Missouri house was an excellent example of the style.  Moreover, it was a far cry from the tenement residence David had known as a boy.

Although Missouri did not ban alcohol sales until National Prohibition in 1920, as the 20th Century progressed, Feltenstein experienced the dwindling of his customer base.  In 1913 the Webb-Kenyon Act had cut off his ability to send mail-order booze into “dry” states and localities. Nevertheless,  he kept his liquor business going until 1918, then apparently went from “wet goods” into dry goods — selling ready-to-wear clothing and household items.  His liquor store later was torn down to create a bank parking lot. 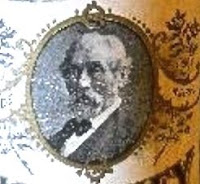 Feltenstein died at the age of 68 in November 1941, listed on his death certificate as “retired merchant.”  The cause given was heart disease and an upper respiratory infection.  He was buried at the Ashland Mausoleum in St. Joseph.  His life literally had been one that went from rags to riches — but he never forgot the roots of his success.  The face and the name of his immigrant peddler father was ever with him on his bottles, his advertising and the large sign that graced his establishment.  They reminded David Feltenstein daily of his hard-scrabble childhood in a New York tenement ghetto and a father whose efforts made it possible for him and his family to live the American Dream.