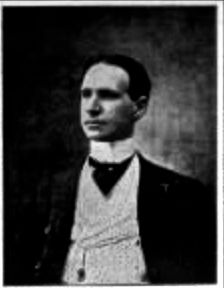 In the lore of Kentucky whiskey, Dan Russell is a distinctly minor figure.  Most books on the history of the industry ignore him completely.  In others he is at most a passing reference or a footnote.  That obscurity, however, was not for Russell’s lack of trying.  By pushing front and center his name, his face, a title, and, yes, a corkscrew, he eagerly sought a place among the state’s acknowledged whiskey barons.  What happened?

Records indicate that Dan, shown above, was born in Kentucky in 1855, the son of Lucien Russell, a New Yorker, and Mary True, from Virginia.  Although he seems to have avoided the U.S. census for most of his life, he apparently became known for his active participation in Kentucky politics and fraternal organizations.  When he ran for state senator in 1904, the Louisville Irish American newspaper, as might be expected, extolled him as “…One of our most prominent citizens, one of those who has an abiding faith in Louisville.”  Later Russell would serve as the local representative of the Kentucky’s governor, where he was given the title of “colonel.”  Although he belonged several fraternal organizations, Dan was particularly active in the Improved Order of Redmen, recorded as its “Great Prophet” in 1906 and later as head of the local chapter.

After working for others in the liquor industry, The Great Prophet had the foresight to see that the Old Times Distillery, located on Louisville’s West Broadway would be an excellent vehicle to advance his interests.  That distillery, founded in 1869, had been brought into national prominence in the 1890s by Charles Lemon and Dick Meschendorf, described as “young and pushing businessmen.” 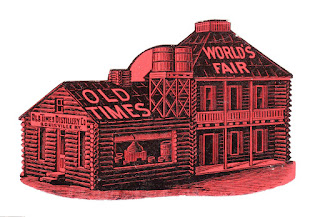 Seeing the World’s Columbian Exposition of 1893 in Chicago as a excellent opportunity for publicity they had built a small working log cabin distillery in the heart of the fairground “between the cliff dwellers exhibit and the educational buildings.”  The exhibit was a great success, the whiskey won a gold medal, and “Old Times” was launched as a national brand.

By 1907 when Russell appeared on the scene, Meschendorf had departed [see my post of February 2013], and Lemon had died.  Dan was able to buy a controlling interest and become president of the facility, shown right, and soon changed the name to the D. H. Russell Distillery.  In addition to continuing to feature the Old Times brand, the new owner added several others, including “Old Dan Hyland,” “Red Clover Blossom,” “Russell’s Extra Pure,” and most important, “Old Dan Russell Whisky.”  Although Old Times had been trademarked in 1905, Russell did not bother to register any of his other brands. 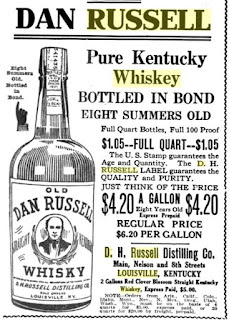 Shown here is a 1909 magazine ad selling Old Dan Russell, illustrated with a quart bottle of the whiskey with Dan’s own Irish face gracing the label.   He claimed it was eight summers old, bottled in bond and a full 100 proof — 50% alcohol.  This was at a time when most bourbon was 80 proof.  Russell sold his potent liquor for $1.05 a quart or $4.20 a gallon, the latter to be sent express post paid.  By this time, Russell commanded a large building on Louisville’s “Whiskey Row” at 725 West Main Street.  Shown below, five stories high, the structure offered retail and wholesale sales on the ground floor.  The mail order department and liquor storage facilities were on the upper levels. 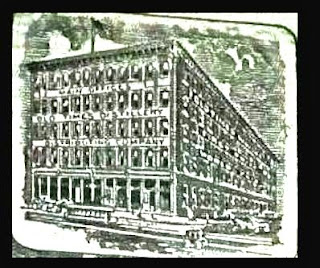 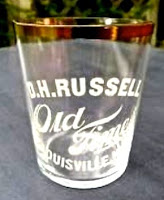 Seemingly always anxious to put his name before the public, Russell issued shot glasses that linked his name with the famous Old Times label.  By far his most famous giveaway was a “silver mounted, buck horn handled corkscrew.”  Shown here depicted on a trade card and in reality, the instrument handle was carved from an antler. 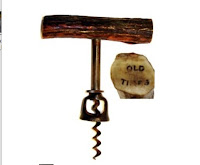 A multi-purpose tool, not only was it a “corkpuller,” it also could draw rubber stoppers from Hutchinson style bottles and lift the crown tops from beer.  To get one free at Christmas 1906, one needed only to buy two gallons of Old Times.  Orders were to be mailed to “your Old Friend D. H.  Russell.”  This item seems to have caused quite a stir in the whiskey industry, possibly prompting  several less exotic Russell corkscrews. 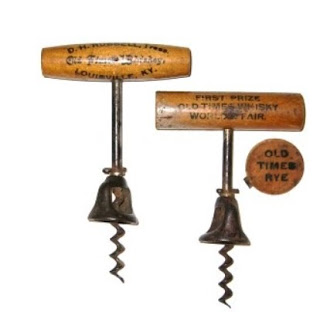 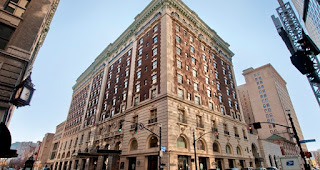 Dan Russell never seems to have married, although that cannot be confirmed because of the lack of census data.  He appears to have been a boarder over much of his career and a 1915 directory listed his residence as the Seelbach Hotel, one of the city’s fanciest. 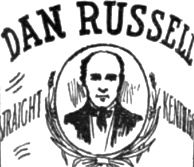 Given Dan Russell stature as president of a major distillery and his own clear effort to get his name known widely in Kentucky and, indeed, the Nation, why has whiskey history largely ignored him?   The reason may lay in a story in a local Loujsville newspaper of March 13, 1917.  The headline read:  “Alleged Conspiracy to Sell Stolen Postage Stamps,  Dan H. Russell, a Prominent Louisville Man, Placed Under Arrest.”   For whatever reason, Russell had been entangled in a national conspiracy to buy and sell stolen postage stamps, estimated by the government to be worth $40,000.

Also arrested were the ringleaders, a man named Henry Bronger and his son, along with a local druggist.  According to postal inspectors, Louisville was the center of the plot, receiving and “fencing” stamps sent from points as far away as Georgia, Louisiana and Texas.  Hauled into court, Russell — identified by the paper as “a leader in fraternal circles and prominent in the business and social life of Louisville” — pleaded guilty in Federal Court to having knowingly received the stolen stamps.  Possibly because of his prominence he got no jail time but a fine of $1,500 (equiv. $37,000 today).

Three years later he witnessed the advent of National Prohibition that required that all Kentucky distilling and liquor sales to cease.  Having been disgraced, Dan was now without employment at the age of 55.  These tidings may have taken a toll on his health.  The following April, Russell died and was buried in Section 2, Range 36, Grave Six, of Louisville’s Eastern Cemetery, one of the city’s oldest graveyards that subsequently was abandoned and largely forgotten. 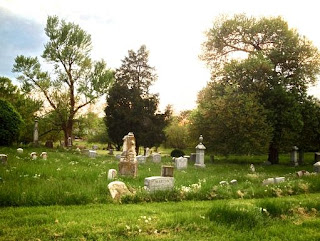 Shown above, the ruined cemetery could be symbolic of Dan Russell himself, a man who vigorously sought visibility for himself in his home town, his state, and his industry, only to be brought down by a clearly criminal act and relegated to a footnote in the history of Kentucky whiskey — like the burying grounds, seemingly abandoned and forgotten.