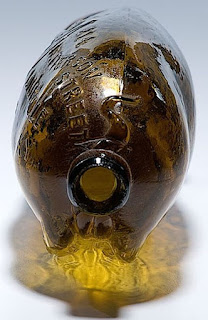 The anatomically correct male hog shown left is one of a group of avidly collected swine mini-bottles that come in clear, aquamarine, cobalt and light and dark amber.  Shown scattered throughout this post, all were issued by John Duffy, a Louisville, Kentucky, saloonkeeper.   Lots of attention have been paid to the pigs by collectors, very little to the identity of Duffy.  This post is aimed at correcting that imbalance.

John Duffy was born in Ireland, the exact location unknown, about 1838, according to census records.  The date of his birth would put him as a small child trying to survive in the midst of Ireland’s 1845 Great Potato Blight and devastating famine.  Starvation killed one million Irish over the next five years and half a million left the island for the United States, many on so-called “famine ships.” 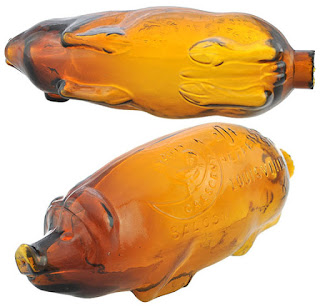 Duffy’s immigration date is recorded in one census document as 1854 which indicates that he was 16 at the time of his passage.  He might have come alone since he would have been considered “of age” in that time.  Although his whereabouts immediately upon arrival go unrecorded, he surfaced in 1857 in Temple Hill, an unincorporated community in Jones County, Iowa, married to Margaret O’Connor (aka “O’Connors) , a girl still in her teens who also had emigrated from Ireland.  A daughter, Margaret Ida, would be born to the couple the same year at Temple Hill.  A son, William J., would be born in 1875. 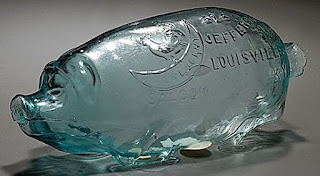 In 1856 a John Duffy was listed in a Louisville directory working as a bartender at the Theatre Inn, a downtown saloon, and living at 972 Goss Avenue.  It is likely that while pursuing this occupation, he met William Kagle, a fellow barkeep, who worked at Delmonico’s Restaurant and boarded there.  About 1867 they determined to throw in their lot together and opened a saloon.

The partners called their establishment “The Asteroid Saloon,” located at 108 Fifth Street at the corner of Court Place, a center of city government activities.  They advertised vigorously in Louisville daily papers.  On October 21, 1867, for example, they announced that oysters could be had in their saloon, any style, for forty cents a dozen.  An ad a week later declared that “fine Fiddle Rock Oysters” could be had at the Asteriod;  fifty cents bought twelve. 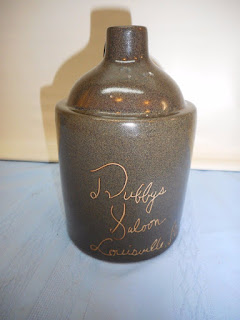 The partnership appears to have been short-lived.  Kagle &     Duffy disappeared from Louisville directories after 1868.  William Kagle is recorded as having gone back to bartending, this time at the H. S. McNutt Saloon, and he later became proprietor of the Delmonico Hotel.  Meanwhile Duffy continued to run a saloon at 108 Fifth Street.  He may have renamed it “Duffy’s Saloon,” the designation to be found on an Albany Slip stoneware jug with a “scratch” label shown here. Duffy remained at that location until about 1873 when he moved to 214 Jefferson Street, a major Louisville commercial thoroughfare. shown below.  He called this new watering hole, the “Crescent Saloon.” 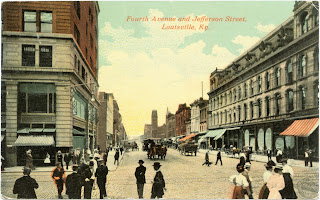 It was from this location that Duffy issued his miniature glass pigs.  He is believed to have handed them out full of whiskey at Christmas to favored customers.  Thereby is rendered a puzzle.  While some of them have the address as 214 Jefferson, others, like the one shown right seem to be designated “204 Jefferson.”  Yet there is no evidence that Duffy ever operated at that address.  My own conclusion is that what looks like a “zero” was actually meant to be a “one,” either a mistake by the glassworks or an attempt to be fancy by Duffy. 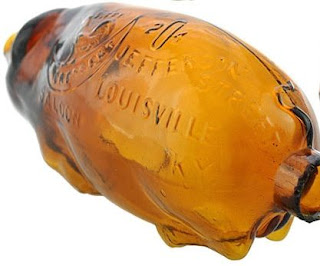 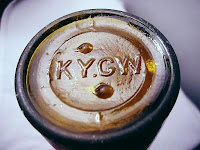 Whether the problem originated with Duffy or in the manufacture is unclear.  Two glass factories have been identified as the likely source.  The pigs do not carry a mark to identify where they were produced but according to the experts the approximate years — mid-1870s to early 1880s — point to either the Kentucky Glass Works of Louisville, one of whose marks is shown here, or the Southern Glass Works. 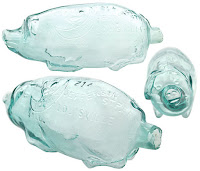 Another mystery is why Duffy included the embossing of a rooster on the back of his pigs.  The chanticleer appears to be crowing from the curve of a moon with the word “Crescent” inside.  One answer that occurs to me is that at the time the rooster, not the donkey, was the symbol of the Democratic Party and that Duffy may have been making a political statement. 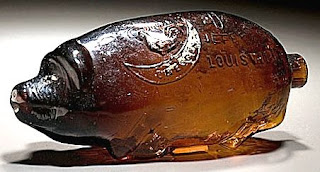 In 1882, without moving, Duffy’s address changed.  As a result of a wholesale renumbering of Louisville streets that year, the address of the Crescent Saloon became 544 West Jefferson Street.  Because none of the pig bottles bear that address it can assumed that they were distributed at the holidays sometime between 1873 and 1881. 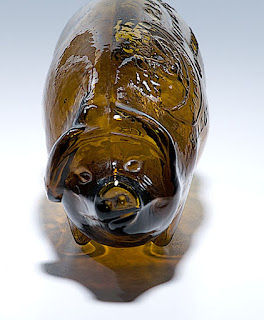 Given what must have been his expense for both bottle and contents, what occasioned Duffy to provide these giveaway items?  Louisville was full of saloons in that era and the competition for customer loyalty was fierce.  The custom among their proprietors was to reward frequent faces along the bar with some token of appreciation.  Duffy chose this fairly unusual method of expressing his gratitude.

Collectors today are glad he did.  Despite the idea of having to drink liquor from their butt ends, these porkers have become a favorite of collectors throughout the country.  Given their excellent shapes, the rich hues of the colored ones, and their scarcity, these bottles command several hundred dollars on the market.  The cobalt bottle, being particularly rare, fetches considerably more.

Although John Duffy can be tracked through Louisville directories doing business for more than two decades, listings for him and the Crescent Saloon cease after 1890.  By that time he would have been only 52 years old, too young to retire under normal circumstances.  National Prohibition eventually shut Louisville’ saloons but that still was thirty years in the future.

The 1900 census recorded a John Duffy, a widower, boarding in a Louisville hotel and working as a laborer.  Although the dates of birth and immigration are similar, I have been unable to confirm that identity, nor have I been unable to find any further record, including his burial place.  John Duffy seems to have disappeared into the mists of time, leaving only an array of small glass pig bottles by which to be remembered.

Posted by Jack Sullivan at 5:50 AM