Death and Discord Among the Dorsheimers of Lancaster 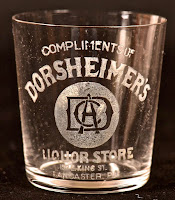 The story made newspaper headlines from Bridgeport, Connecticut, to San Bernardino, California.   Across America people knew that two sons of Peter Dorsheimer, a Lancaster, Pennsylvania, liquor wholesaler, had been jailed, accused by another sibling of having murdered their father and mother 14 years earlier while making it look like an accident.   Until then, the public face of the Dorsheimers was of a happy family of solid Pennsylvania stock, high achieving and affluent, civically and politically active, and strong adherents to the German Reform Christian Church.  Whatever tensions roiled beneath the surface went unnoticed.

Peter Dorsheimer was born in Hesse-Darmstadt, Germany, in July 1840, the son of a well-to-do farmer, also named Peter, and his wife, Anna, a woman who came from a wealthy German manufacturing family.  In May 1860, for unknown reasons, the family pulled up stakes in their homeland, sailed from Le Havre and landed in New York.  From there the family made its way to Lancaster, Pennsylvania, where many of their co-religionists already lived.  Initially the young Dorsheimer obtained employment on an area farm where he worked for five years, saved his money, and bought the Shemdown House Hotel in Lancaster.   Soon tiring of the hospitality trade apparently, Peter then devoted his ample energies and strong entrepreneurial bent toward real estate development, buying land and erecting houses on them.  Often he had 80 to 100 men in his employ.

Dorsheimer had married early, not long after his arrival in the U.S.  His bride was Anna E. Stauffer, a German immigrant herself from Berne on the Rhine.  From their marriage twelve children were born and, unusual for the times all reached adulthood.  In order of birth they were Daniel, Frank, Ada, Harry, George, Mary, John, Elizabeth called “Lizzie,” Benjamin, Martin, Garfield and Chester also called “Arthur.”  As his boys grew, Peter set them up in Pennsylvania businesses, but interestingly, most away from Lancaster.  He financed John and Martin in a real estate development business in Philadelphia;  Frank and George with a carriage building factory in Coatsville,  and Daniel and Harry in a similar enterprise in Gap.  The two girls also had relocated, Lizzie to Reading and Mary to Newark, New Jersey.  Benjamin was still at home working for his father. 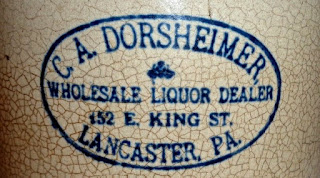 In 1887, Dorsheimer exited other business interests in favor of opening a wholesale liquor house in Lancaster.  Under the name “C. A., Dorsheimer” he located his business at 150-152 East King Street, the busy commercial avenue shown below and called by a biographer, “a fine location.” 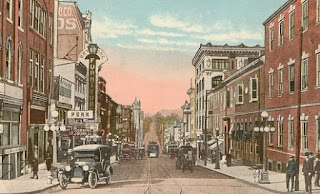 Peter’s storefront stretched almost 33 feet and was 96 feet in depth.  He stocked it with bottles and jugs of liquor, including well-known  brands. The building is shown left as it looks today.  For his wholesale customers he packaged whiskey in ceramic jugs with a cobalt logo.  For retail sales he often bottled his whiskey in honey amber flasks and quarts.   Many had a paper label in the form of a fish.  It read:  “You may fish all you want. You can't catch anything better for the money than you can at Dorsheimer's Old Wine & Liquor Store.”

We have a description of Peter as he looked at this time, taken from an 1885 passport application.  He was six feet in height, tall for that time, had dark brown hair that was turning gray. He had no facial hair and a small growth at the front of his right ear.  By 1903 he had made ten trips to Europe, purchasing Rhine wines, Holland gin, French brandies, and Scotch and Irish whiskey.

The liquor dealer became a well-known figure in Lancaster as businessman and automobile enthusiast.  In a 1901 parade of cars, according to a biographer:  “No man in the parade was saluted oftener than Peter Dorsheimer for no man is better known and liked.”  He and Anna were active and respected members of St. Paul’s Reformed Church in Lancaster.  They lived in a three and one-half story home at 444 East King Street not far from the store, the building shown here as it looks today. 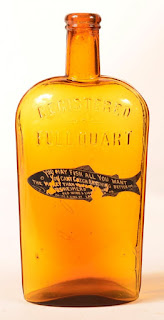 By 1903 some Dorsheimer sons gravitated to other pursuits and the daughters had wed.  Daniel was running a hotel at Parkersburg, assisted by Benjamin.  John was in the cigar trade in Boston.  Frank had split with brother George and each was running his own carriage manufactory.  Harry was building carriages in Parkersburg.  Mary had married and was living in New York City and “Lizzie” was in Reading with her husband.  Garfield worked at the Slaymaker lock works in Lancaster and Chester/Arthur was assisting his father in the liquor trade.  Enthused a biographer:  “This is surely a remarkable family record, seldom equalled, a family circle complete and unbroken.”  In the light of later events, this statement seems highly ironic.

As he aged, Peter Dorsheimer turned over the liquor business to his sons, principally it appears to Chester/Arthur and Benjamin.  Living with Anna and unmarried daughter, Ada, for outside observers the parents seemed like an elderly couple living out their “golden years” surrounded by their successful children and with ample grandchildren to pamper.  Then on April 16, 1910, tragedy struck.  The couple were found dead in their bed, asphyxiated by illuminating gas from a fixture in their bedroom in which the flame had been extinguished but the deadly gas continued to flow.  The decision of the coroner, backed by the sheriff, was accidental death. as noted on Peter's death certificate below. 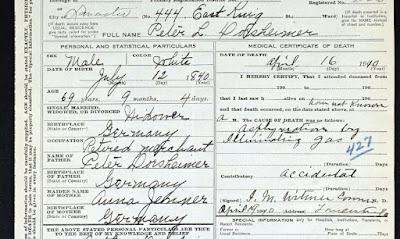 The theory as was that an errant piece of clothing from one of the two had brushed against the jet, blowing out the flame, and the couple had not noticed.  There were no other theories of how the Dorsheimers had died.  Peter and Anna were buried together in Lancaster Cemetery, their gravestones shown here. 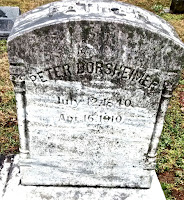 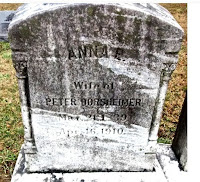 Fast forward 14 years to headlines from coast to coast:  Benjamin and Chester/Arthur Dorsheimer had been jailed in Lancaster County on suspicion that they had murdered their mother and father on that April night as they slept peacefully.  The accuser was their brother, Frank Dorsheimer.  Why had it taken 14 years to come forward? It had taken him considerable time to line up witnesses, he responded.  The brothers under suspicion said Frank was a religious “fanatic,” and claimed he was basing his charges on messages received from the spirit world.  Frank denied that accusation and countered that Chester/Arthur had confessed to him:  “He said, ‘I guess you would like to send me to the electric chair, wouldn’t you.’  He said ‘…Well if I did do it, it was a slick job and I got away with it.’”

Only one official to whom Frank brought the story thought it believable enough.  He was Squire Diller, a justice of the peace in Gap with the power to arrest and incarcerate.  Diller explained that it was not because he was convinced of the brothers’ guilt but because it was his duty to hold court whenever a probability of a crime was shown. During the hearings that followed, George Dorsheimer defended his brothers saying that many family members were dubious about the arrests and Diller’s actions.  “There is not one iota of evidence against these defendants,” he testified. “The only evidence is by a rattle-brained brother concerning an alleged confession….”

Nevertheless, Frank Dorsheimer’s charges were supported by another sibling, Lizzie — now Mrs. Elizabeth Pennypacker of 59th Street, Philadelphia.  She testified that shortly before the funeral she had attempted to examine the bodies for marks of violence but had been prevented from doing so by the undertaker.  “I have always had suspicions as to the cause of death…,” she said and noted that she had raised the issue with both Benjamin and Chester/Arthur.  Although they had denied any knowledge of the event, she had harbored doubts over the years.  All this made juicy headlines in the nation’s newspapers.  The brother languished in the Gap jail for seven days while their lawyers sought their release from the court in Lancaster, shown here. 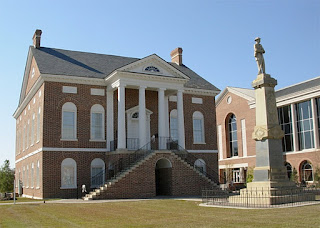 At last a country court judge listened to the evidence, including the fact that the door to Peter and Anna’s bedroom had been locked from the inside, making it impossible for someone to slip in and blow out the gas jet while they were sleeping.  He ordered the brothers immediately released from jail.  That appears to have ended the ordeal of Benjamin and Chester/Arthur.  In the process, however, the Dorsheimer family circle that once had looked so strong had, indeed, been broken and likely irreparably so.

Note:  As an indication of the media and public interest in the Dorsheimer case, the quotations above were gleaned from the Lebanon PA Daily News, Warren PA Tribune, Delaware County PA Daily Times, and the Franklin PA News Herald, as well as the Bridgeport NJ and San Bernadino papers.