The Mouls: The Liquor Dynasty That Almost Wasn’t

Three generations of the Moul family were prominent in the sale of whiskey to the townsfolk of York, Pennsylvania, over a period of almost seventy years (1851-1919)— an amazing record in the liquor trade where a twenty-year run is notable.  But the Moul dynasty was in true peril for three days in June, 1863, when the town was occupied by the Confederate Army and threatened with destruction.

First, something about the Mouls.  The origin of the name variously is given as Scottish, English, Irish, German, French and Dutch.  Not in question is where Moul families located upon coming to America, the vast majority settling in Pennsylvania as farmers.  A section of York County in Heidelberg Township was known as “Moulstown” and there, appropriately enough, Charles Moul was born in the summer of 1814 to Conrad and Anna Maria (Hair) Moul.

Farm life apparently had little appeal for Charles and he gravitated toward York, then one of the hundred largest cities in the nation.  My guess is that he began by working in a local grocery store, saved his money, and planned some day to strike out on his own.  He may have been spurred on by his marriage in January 1844 at Christ Lutheran Church in York to Susannah (“Susan”) Stambaugh. About 1851, Moul took the step and opened his own grocery on South Duke Street, a store that specialized heavily in selling liquor.

Prospering as a merchant, in 1859 Charles moved his grocery and liquor business into a brand new four-story building at 112-114 South George Street.  These facilities allowed him to stock large quantities of spirits for wholesaling to local saloons and restaurants.   The space also allowed him to buy whiskey by the barrel from Pennsylvania distilleries and decant it into his own jugs and bottles labeled with his name.  He featured a proprietary brand he called “Violet Springs 1851.”  Life at mid-century seemed good to Charles Moul — but things were about to change.

In late June 1863 General Jubal Anderson Early, a fiery Confederate commander marched into the heart of York County with 6,600 battle-hardened troops.  They burned railroad bridges and turntables, took down telegraph wires, confiscated more than 400 horses and dozens of mules from angry farmers, and seized control of major roads.  Then they occupied York.  An artist’s rendering here shows rebel troops tearing down the American flag in the town’s Miller’s Square. 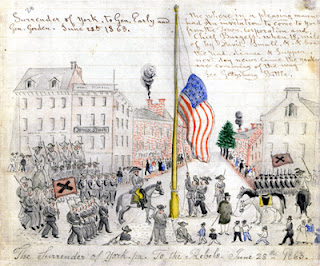 Even more distressing was Early’s threat to townsfolk:  Come up with $100,000 in tribute to the Confederacy or face the burning of York — the equivalent of asking for $2.5 million today.  Moul’s building with its stock of whiskey was in serious jeopardy of being torched.  Meeting Early’s demands was impossible but local leaders went from door to door to try to collect as much as they could.  Although there is no list of who gave what, we can believe that Moul with so much at stake was among the larger contributors.  In the end, only $28,610 of Early’s demand could be raised and turned over.  By that time, however, Lee had ordered the general and his troops to the fateful battleground at Gettysburg.  As the troops marched out of town, I imagine there was a collective sigh of relief. 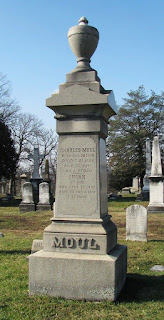 The crisis over, Charles Moul continued to prosper, phasing out of groceries into fully pursuing the more lucrative liquor trade.  In time he was joined by his son,  Edwin T. Moul, born in York in 1849.  Beginning as a clerk, the son learned all facets of the business and demonstrated many of the entrepreneurial qualities that characterized his father.  As he aged, Charles increasingly turned management over to Edwin.  The elder Moul died in 1884 at the age of 73 and was buried in Prospect Hill Cemetery in York. 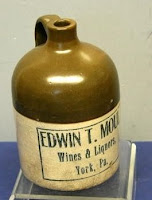 Edwin lost no time in putting his own stamp on the enterprise.  He changed the name to the “Edwin T. Moul, Wines and Liquors.”  That name adorns ceramic jugs, none of which appears to bear a pottery mark.  The assumption of local bottle collectors is that these containers were made by either the Pfaltzgraff Stoneware Co. or the The Pfaltzgraff Pottery Co., located in York County.  Shown here, the jugs ranged from two gallons down to quart size.

Although Edwin Moul was faced with the financial panics of the late 1800s, growing anti-alcohol sentiment, and several attempts to impose monopolies or “trusts” on the whiskey business that often made it difficult to get supplies, he continued on the track of prosperity that his father had blazed.  After 23 years of guiding the fortunes of the South George Street establishment,  Edwin died at the age of 58 and was buried at Prospect Hill, not far from his parents. 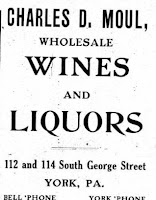 By this time a third scion in the family line was primed to take over.  He was Charles D. Moul, born in September 1878 at York to Edwin and his wife Addie.  Edwin early on had introduced his son into the liquor trade.  Just as his father had done, Charles took the opportunity to change the firm name to his own.  The South George St. company became “Charles D. Moul, Wholesale Wines and Liquors.” 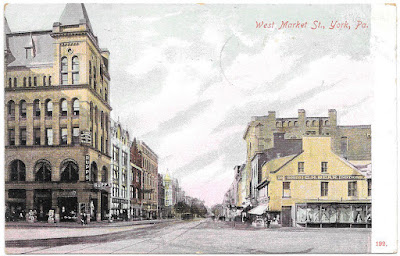 A postcard from about 1908 shows a well-established York that was undergoing a modest economic boom. As a wholesaler, Charles D. faced a new set of challenges, forced to advertise and vie vigorously for the business of the burgeoning number of saloons and restaurants in the city and surrounding areas.

A key business strategy for wholesalers was providing customers with gifts that contained advertising.  In Charles’ case the giveaways included a shot glass advertising Virginia Spring Whiskey, and a corkscrew touting Moul’s Rye.   My favorite, shown right, is a small jug that sported a bail handle (now missing) and containing a few swallows of liquor.  With such vigorous marketing, this third in the line of Mouls was able to continue the thriving business his grandfather had begun in 1851. 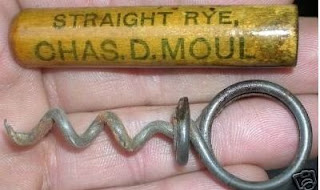 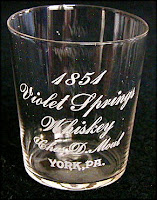 National Prohibition, however, posed a threat that even General Early could not match.  Faced with the passage of the Volstead Act that mandated the end of all alcohol sales nationwide, Charles D. was forced to shut the doors on the Moul whiskey dynasty.  He was 42 years old and had been running the business for twelve years.   Still relatively young and with cash to invest,  he entered the new and expanding auto supply market, opening a business in the early 1920s called The Community Tire Shop.

This may have been a relatively short-lived enterprise. According to the 1930 census Charles D., living in York with his wife, Linda, and two adult sons, had no occupation.  Although he lived to see Prohibition repealed,  no evidence exists that he or his sons returned to the liquor trade.  He died in 1939, age 61, and is buried with other family members in Prospect Hill Cemetery.

Any liquor house that could count a life span more than a generation would have had its share of history-driven vicissitudes.  Few if any, however, faced the destructive challenge that Jubal Early posed in June 1863.  Having survived that crisis, the Mouls thrived for three generations and 68 continuous years in business — a remarkable accomplishment.  As a symbol of their success,  the Moul Building, shown here, still stands in downtown York.