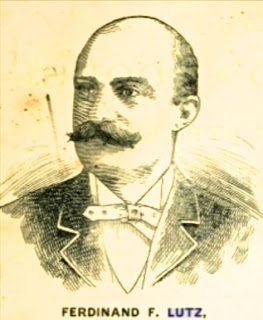 Malt is an essential ingredient for both brewing and distilling.  Because many distillers did not have the capacity to undertake the malting process, they purchased it from “malt houses” whose primary purpose was to turn a grain, usually barley, into malt.  As one pre-Prohibition writer observed, “Malting is the task of maltsters, and its technology is now far advanced.”  As a master maltster, Louisville’s Ferdinand F. Lutz, was well aware of that.

Lutz was born in Louisville in August, 1856, and may have lost his father at a young age.  The 1860 census found him at four years living with his sister and mother who was described as a “yeast maker.”   He was educated in local schools and apparently served an apprenticeship with one or more of the many whiskey-related enterprises located in the city, likely working in the malting process.

He became skilled in producing barley malt, the most common, where the barley grain is put in an warm and damp environment in order to make it germinate. The inevitable happens: The grain activates the solar energy it has accumulated on the field and converts the starch into sugar. The barley grain is like a small factory and wants to convert the sugar into cellulose in order to grow roots and a germ with leaves. 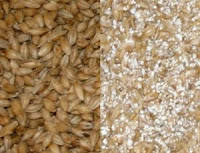 However, after the starch is converted into sugar the process is interrupted. The malt is dried, and the malt sugar (maltose) is used to produce a sweet liquid called wort. The malt is ground to a coarse consistency, then the sugar is dissolved with hot water, and the results left to ferment by adding yeast. After that, it’s time for distillation.

By the age of 23, Lutz had mastered the art and science of making excellent malt and determined to strike out on his own.  He opening a modest malting operation in Louisville that soon gained a reputation for quality and allowed him greatly to expand.

By 1891 Lutz was operating three malt houses:  The City Malt House at Monroe and 12th Street with a capacity of 250,000 bushels, shown here; the Louisville Malt House, corner of Franklin and Wenzel Streets with 150,000 bushels capacity; and another in Versailles, Kentucky, of 100,000 bushels.  Those facilities would have incorporated drying floors and kilns similar to those shown above. An illustration of the City Malt House is shown below. 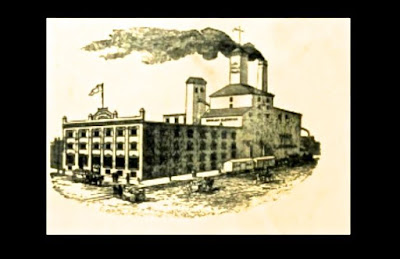 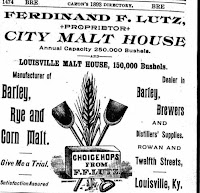 In addition to manufacturing various types of barley, rye and corn malt, Lutz was dealing in brewery and distillery supplies, and filling orders for yeast malt.  Accounted one of the largest manufacturers of malt in the South, Lutz in an 1893 ad suggested “Give Me a Trial.”  Many brewers and distillers obliged and his trade was reported to extend throughout Kentucky, Ohio, Virginia, Tennessee, and Georgia.  He also was selling locally, providing product to many of the whiskey and beer makers of Louisville and its suburbs.  His business was grossing $350,000 a year (equivalent to more than $7 million today), hailed by one writer as “striking proof of Mr. Lutz’s enterprise and skill.” 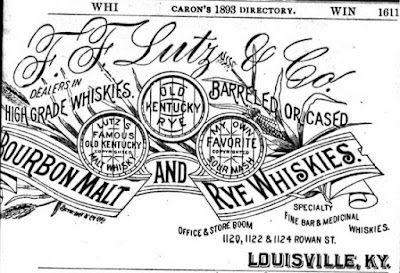 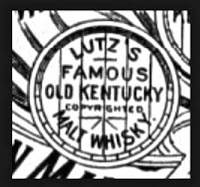 Lutz also was a whiskey man, advertising his F. F. Lutz & Co. dealership in “high grade” bourbon malt and rye whiskeys.  A specialty, as his1893 ad states here, was “fine bar and medicinal whiskeys.”  His proprietary brands were “Lutz’s Famous Old Malt Whiskey” and “My Own Favorite Sour Mash.”  Although he said both labels were copyrighted, I can find a 1890 trademark registration only for the latter.  Lutz’s liquor house and store room were located at 1120-1214 Rowan Street, apart from his malting operations.

Even at the age of 35 — the vintage of his picture above — Lutz had made his mark on in the Louisville business community.  He was a member of the Commercial Club and of the Louisville Board of Trade, was a major investor in the Belt Line Railroad Company, a stockholder in the South Park Brewing Company and the Shaefer-Meyer Brewing Company.  He also was a member of the Brewers and Maltsters Protective Association and active in the St. Joseph’s Orphan Society, perhaps further indication that he himself had lost a parent.

Although continually extolled for the hours and energy he put into his malting enterprises, Ferdinand also found time for family life.  In the late 1870s, while still in his early twenties, he married Anna Mary Wunsch, Kentucky-born of German immigrant parents.  He became a father at the age of 23 when a son, baptized Ferdinand Louis Lutz, was born in 1879.  The boy was followed by a daughter, Isabelle C., in 1886 and a second son, Arthur C., in 1890.

Lutz also drew attention because of his writing ability, contributing regularly to monthly trade publications, including Bonfort’s Wine Spirit Circular Journal and the Wine and Spirits Journal.  Those writings allowed him to advertise his wares as well as, upon occasion, voice his concern about encroaching competition.  Bonforts reported that “notwithstanding the big competition of this season,” Lutz had shown a satisfactory increase in sales because:  “His rye malt is somewhat of a specialty and many distillers will use no other.”

Eventually, competition caused Lutz to abandon directly manufacturing malt.  Citing the difficulty of getting barley in Kentucky because of a short growing season, his need to obtain expensive supplies in distant  Wisconsin and Minnesota, and burgeoning new technologies in malting, Lutz retired from making malt and went to work selling it as a representative of the Wm. Rahr Sons Co. of Manitowoc, Wisconsin.  As Rahr Sons’ southwestern agent, he was joined by his two sons, Ferdinand L. and Arthur C. Lutz, the three covering a territory extending over the entire Midwest and South.  Shown here as he aged, the father continued to work virtually up until the day he died on August 12, 1915, felled by a cerebral hemorrhage. 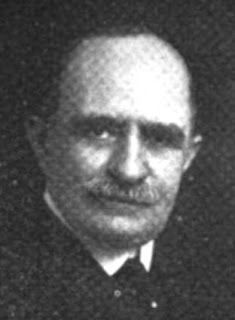 Shown here as he aged, Lutz was a relatively young 56 when he passed.  His funeral services began with a viewing at his home on South Brook Street in Louisville, moving to a funeral Mass at St. Mary’s Church, the Catholic parish where he had been active.  Burial was in Louisville’s St. Louis Cemetery.  The Lutz monument is shown below.  His obituary noted that Lutz had been prominent in the malting business for more than forty years.  His sons carried on his enterprise renaming it F. F. Lutz Sons and operated until the advent of National Prohibition.

In both life and death, Ferdinand Lutz drew extravagant praise:  The Illustrated Louisville publication (1881) hailed him as “not only a whole-souled, clever gentleman, but also a liberal minded citizen, progressive, and always ready to do one a favor.”  Bonforts (1890) called him:  “a whole-souled, jovial fellow, and one who values a friend, and is valuable as a friend.”  His obituary in The Western Brewer (1915) stuck similar themes:  “His amiable disposition and polished manner won him a host of friends, not alone with the brewers and distillers, but with everyone with whom he came in contact.”

Posted by Jack Sullivan at 6:28 AM