Foreword:  During the six years I have profiled more than 560 pre-Prohibition “whiskey men,” — distillers, distributors and saloonkeepers — it has been striking how many of them also took a turn at inventing things.  Perhaps my astonishment was misplaced, however, when one remembers that the late 1800s and early 1900s were the age of Edison, Bell and the Wright Brothers.  Many Americans were trying their hand at inventing new things and patenting their ideas.  Whiskey men were simply following the temper of the times.  Among a number of possibilities I have selected four men who best epitomized this innovative mentality while otherwise engaged in making and selling liquor. 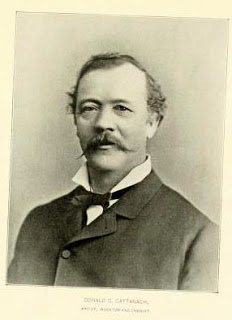 Perhaps the most prolific among them was David D. Cattanach of Pawtucket, Rhode Island — the Leonardo DiVinci of whiskey men.  Shown right, like Leonardo, Cattanach was an artist and an inventor in many fields.  As a youth in Scotland he invented a continuous process for manufacturing ingredients for gun powder.  Upon emigrated to the U.S. and Pawtucket, he innovated the use of hydrochloric acid for making stained glass windows, decorating churches throughout New England.  Later he invented a coal-efficient stove and a process for refining and treating oils. 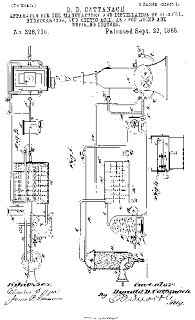 In 1885 Cattanach took an initial step into the liquor trade when the U.S. Patent and Trademark Office awarded him two new patents.  One was for an “apparatus for the manufacture and distillation of alcohol, hydrocarbons, and acetic acid, and for aging and refining liquors.” The illustration he submitted with the application, shown here, is not as elegant as Leonardo’s drawings but presumably more practical. The second patent was for the process involved in using the distilling apparatus.   More than a decade would elapse, however, before Cattanach opened his own distillery.  Perhaps unable to sell his system to others successfully, he determined to employ it himself.

With a local partner, he created a corporation they called the Beverage Hill Road (B.H.R.) Distilling Company, capitalizing it at $100,000 — equivalent to $2.5 million today.  His flagship brand was “Heather Blossom” whiskey.  Clearly citing his inventions, Cattanach’s ads claimed that his liquor was made by an entirely original process and contained no fusel oil or other poison. Things did not go well, however, for the Beverage Hill Road enterprise.  Perhaps the Cattanach distilling process gave an off-taste to Heather Blossom and other B.H.R. products.  Whatever the reason,  the evidence is that only three years after it opened Cattanach’s company summarily shut down. 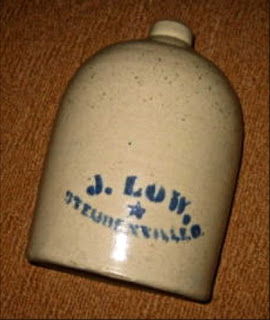 Equally dedicated to inventing as Cattanach was Joshua Low. a liquor dealer of Steubenville, Ohio, who was considerably less successful in selling his ideas.  It appears that Low’s first invention was a “thill coupling,” that he patented in 1873 when he was 28 years old.   For those, like me, not familiar with the term, a thilll is one of two long shafts, usually of wood, between which a horse is hitched. Although no evidence exists that his “thill coupling” ever saw practical fulfillment, he turned his attention to coupling railroad cars.  This  invention, he claimed, could firmly join two pieces of rolling stock simply by pushing them together.  Again, there was apparently no commercial interest. 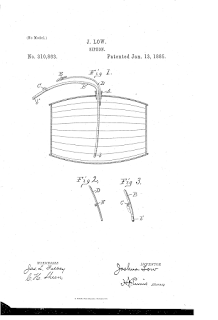 Low next turned his inventing fever to an area of where his knowledge was more personal — coaxing liquid out of a larger container and into a jug or bottle.  As a liquor dealer he had experienced years of tediously siphoning whiskey and wine out of barrels and into wholesale or retail portions. The task apparently had triggered a desire on Low’s part to facilitate a means whereby the liquid could be drawn off at a point higher than the tank or cask.  His patent drawing is shown here. 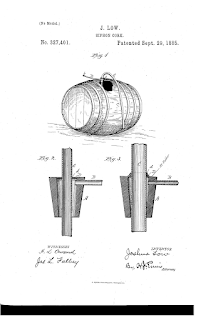 Having patented this invention in January 1885, Low continued to work on the problem of emptying barrels.  His improved dual siphons needed to be stabilized in place if they were to work right, he subsequently suggested.  This required a specialized kind of siphon cork made of rubber to hold each tube in place.  With this further development, patented the following September, he claimed he had perfected “a device…that will meet the general demands of the trade….”  While Low himself may have employed this invention, again there is no evidence of general manufacture.

Freeman Graham II and his sons were part of an era in American history, embodied in Thomas Edison, during which a knowledge of how machines worked and the inventive genius to improve them could be a way of upward mobility.   With their technical and executive know-how the Grahams moved from agricultural implements to success in making whiskey in Rockford, Illinois. 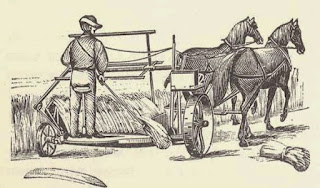 A native of New England, Graham was lured to the Middle West by the larger salaries he could make as a designer/manager for farm implement companies.  He was responsible for innovations that improved the performance of reapers and other agricultural equipment.  With his earnings he established the first distillery in Rockville, which also was the first sour mash whiskey facility in Illinois.  He called called it the Graham Distilling Company.   Shown below is a illustration of the distillery.  Smoke pours from a chimney on the building, while the warehouse on right has been constructed to resemble a medieval castle. 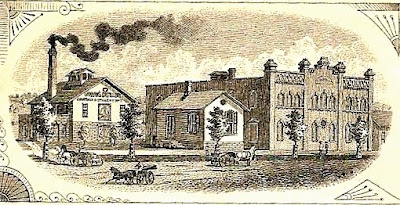 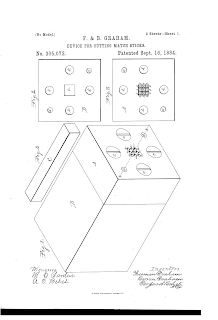 With his son Byron, Freeman in 1884 patented a machine for cutting matches, the drawing shown here.  Likely this invention failed to return even a fraction of the wealth the family took from making and selling whiskey.  Although he had begun his career in the reaper business, Byron Graham was involved with the distillery virtually from its beginning.  He headed its management after his father’s retirement and about 1901 changed the company name to Graham Bros. Distillery.  The market for Graham rye and sour mash whiskeys continued to grow.  By 1891 the company was grossing the current equivalent of $7.5 million annually and employing 45 workers. 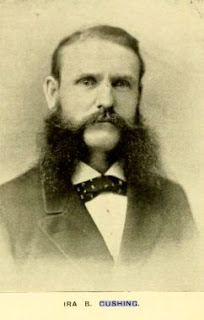 “The Cushing Medical Supply Company” and its proprietor, Dr. Ira Barrows Cushing, in their very names carry a certain expectation of authenticity and trustworthiness.  That is, until one discovers that the “medicine” mainly supplied by Cushing was whiskey that the homeopathic physician mixed up in his Boston headquarters, presumably using the “Cushing Process for Purifying Alcoholic Liquors,” that he patented in 1892.

Shown below is the Rube Goldberg-like contraption that Cushing assembled for a “process of and apparatus for purifying and maturing liquors or distilled spirits.”  His  patent application explaining how it worked ran to more than three highly technical and abstruse pages.  An example of his description: “My present invention consists in commingling a suitable quantity of oxygen gas with the atmospheric air employed for treating the liquor, whereby the air which is disseminated through the liquor is energized or rendered more active for the purpose of rapidly oxidizing the fusel-oils into their avoring-acids and the process of maturing the liquor thus accelerated and rendered more perfect than heretofore.” 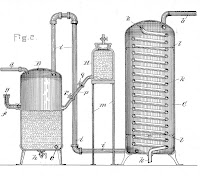 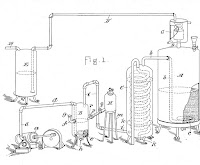 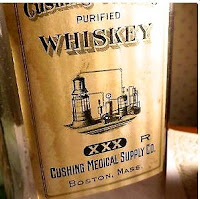 Whatever the examiner understood of “atmospheric air,” “avoring acids,” and the rest, on November 1, 1892, the United States Patent Office issued Cushing Patent No. 485,984.  Cushing reputed used his patented system for his own whiskey, a variety of brands sold largely on the basis of their medicinal value.  The label of “Cushing’s Process Purified Whiskey” shows a simplified version of his apparatus.

Four years after the doctor’s death in 1908, his firm was dissolved and his whiskey brands terminated.  No evidence exists that any distillery or liquor house subsequently adopted the Cushing Process for making whiskey, suggesting that the reputed benefits of the doctor's invention may have been largely “atmospheric air.”