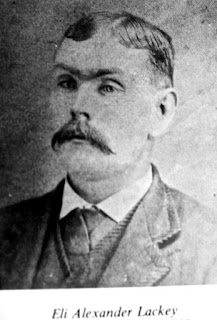 A regional history, commenting on a North Carolina town adjacent to the South Carolina line, concluded:  “In a manner of speaking, much of early Hamlet was built on money from liquor production…The Lackey liquor fortune….”   Indeed, the day in 1890 when Eli Alexander Lackey settled in Hamlet made possible the day in 1917 when the famous Enrico Caruso sang in the city’s Opera House.

Lackey was born in Idrell County, North Carolina, in 1861, as the Civil War was raging.  His father, Joseph, a farmer, was twenty-four at the time of his birth and his mother, Frances, was 20.  Of his early life, little is recorded.  It would appear that as a youth he became acquainted with the liquor trade, possibly working in a saloon that had its own distilling facility. 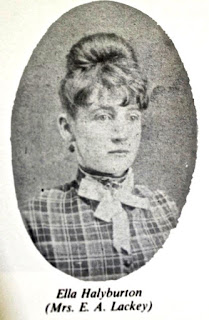 It is evident that when Lackey arrived in Hamlet, he was newly married, perhaps the impetus for the move.  His bride was Ellen (“Ella”) Halyburton of McDowell County, North Carolina.  She was the daughter of Hoyle, a farmer,  and Harriet Halyburton and the youngest of nine children.  When they married Eli was 28 years old and she was 21.  They would go on to have a family of four children who would live to maturity. 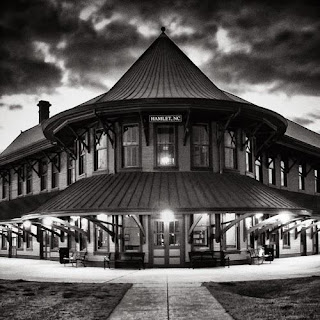 Lackey had made a wise choice of a destination.  Although Charlotte was closer to his home place than Hamlet, he had bypassed it to arrive at this this southern most city in North Carolina.  In the early part of the 20th century, more than thirty trains stopped in Hamlet daily at its spacious station, shown here, en route to New York City, New Orleans, Richmond and cities in Florida. Known as "The Hub of the Seaboard,” railroad line, Hamlet boasted seven hotels and numerous boarding houses and restaurants catering to rail passengers. 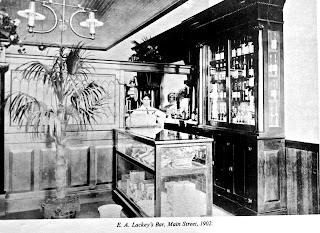 Recognizing that many of the transients as well as the locals would have a thirst and the requisite cash, Lackey lost no time opening a saloon.  It was an ornate, well decorated watering hole — and highly popular.  By 1891 he also had opened a distillery, located on Lackey Street, to provide liquor for his bar and for retail sales.  He erected a building on Hamlet’s Main Street that he called the “recified house” where he stored his bottles and jugs.  He also built a shed just across the railroad tracks on Hamlet Avenue he called “the grain house.”  From there he used an eight-horse wagon to haul grain to his distillery, shown below. 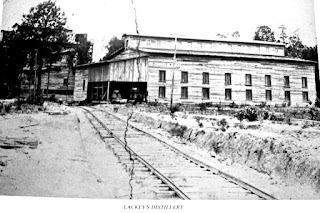 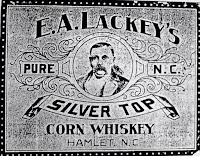 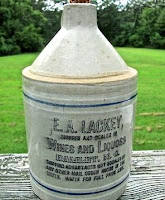 Ever the canny businessman, Lackey, unlike many of his North Carolina competiors, took the trouble and cost of registering this brand with the Patent and Trademark Office — the first in the state to take that step.  He sold his whiskey in ceramic containers:  “No charge for jugs.” Sizes varied from gallons, shown above, and two and three gallon containers, as below.

Courting an express mail order trade, including to areas that had gone “dry,” his ads emphasized railroad access:  “Train goes out every day.”  His jug labels boasted:   “Shipping advantages not Equaled by any other Mail Order House in the South.”   Lackey also was shipping his liquor in quart glass bottles, emphasizing that the products were coming “direct from distiller to consumer.”  Four quarts of Silver Top Corn were $3, the glass a bit more expensive than the $2.50 for a gallon jug.  Both were shipped in plain cottonwood cases:  “No marks to indicate contents.” 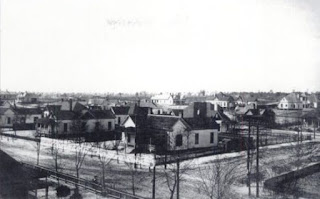 Lackey’s vigorous merchandising paid off handsomely and he amassed significant wealth.  He used his profits to purchase and develop 100 acres of land in Hamlet, constructing modest homes that were affordable to residents with moderate incomes.  Called “Lackeytown,” the neighborhood is shown above as it looked circa 1909.  About the same time Eli built his family a mansion home, later to become a church property, shown below. 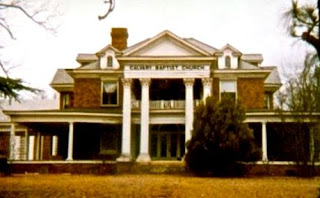 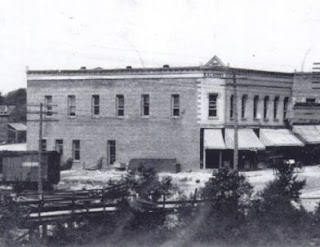 The distiller also transformed downtown Hamlet starting in 1906 by building its first block of brick buildings on Main Street, structures that still stand.  He had surveyed and platted the downtown in 1898 and guided its development for the next twenty years. His contributions include two identical Lackey buildings, one shown here at 23-27 Main and the other at 41 Main.  Examples of Italianate style, they feature distinctive cut-away corners and exterior metal declaration.  Chiseled on the corner of each building in large letters above cornices is the name “E. A. Lackey.”  Nearby was the Central Hotel, constructed in 1911 with Lackey funding.  It rose three stories, again in Italianate style.  Lackey founded a bank and built a Neo-classical building to hold it  A fifth Lackey building on Main Street he gave a distinctive cast-iron store front. 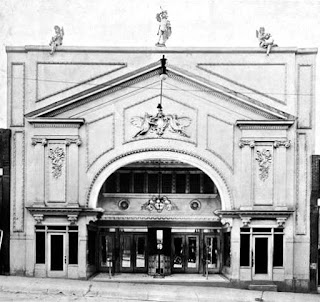 Although these construction projects were a source of pride to the Lackey family and brought them considerable community recognition, Ella and Eli dreamed of bringing something cultural to Hamlet.  They decided on contributing an opera house at 55 Main Street, where Eli’s distillery warehouse earlier had been located.  Building commenced in 1912. As shown here the opera house originally had a Greek Revival facade with an ornate interior to match.  The theatre provided a venue for the people of Hamlet to hear lectures by Booker T. Washington and William Jennings Bryan, songs by Jenny Lind, and shows by Buffalo Bill Cody and other traveling entertainers.  “And for one glorious night in 1917,” according to an historian, “Hamlet was the center of the musical world as Italian tenor Enrico Caruso performed before a packed crowd….”   This performance brought Eli and Ella Lackey to their pinnacle of success. 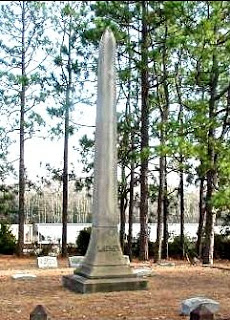 Unfortunately the glow was not to last.  The Spanish flu epidemic of 1918 ravaged Richmond County and caused the governor to put Hamlet and other towns under a strict quarantine.  It did not save Eli who succumbed on October 11, 1918.  His two brothers and business associates, Ollie and Fred, died of the same epidemic within three days of Eli’s passing.  Ella and their four children survived.  With his wife and family looking on, Lackey was buried in Hamlet’s Mary Love Cemetery in a plot that contains other family members.  A tall obelisk marks the place.

Ella Lackey lived another 38 years, long enough to see the family fortune wiped out.  A survey of his estate following his death showed that Eli had left a vast amount of real estate to his widow.  It included much of downtown Hamlet and other properties.  The onset of the Great Depression in the 1930s, however,  hit the Lackey family hard.  By 1935 Ella and other heirs had lost almost all their Main Street holdings and other tracts through foreclosure.  Their mansion home was sold and later torn down.

Now on the National Register of Historic Places, the Main Street buildings that Lackey financed still stand.  Although its facade was altered to “Art Deco” in the 1920s, the opera house continues to be in use.  These structures are constant reminders to residents and visitors alike of Eli Alexander Lackey and how he used his profits from distilling and selling whiskey to build up his adopted home town.

Note:  The information for this post was gathered from a number of sources, the principal one being Linda Harris Edmisten’s report, dated 1991, proposing Hamlet’s Main Street as a historic district.