The Conjoining Sins of Chicago’s Many, Blanc

For many Americans the “conjoining sins” were drinking whiskey and smoking tobacco.  Beginning in 1891 Many, Blanc & Company for years were one of the foremost liquor and cigars importing and distributing houses in Chicago. Such activities merited the special scorn of Carrie Nation and her followers who viewed smoking and drinking as the Siamese twins of sinful and dissolute behavior — inextricably joined.  Stanley G. Many, however, had a different idea, one that succeeded in perpetuating the name of his company almost 70 years. 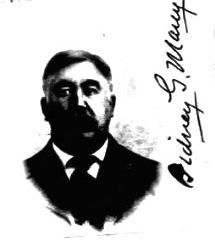 Shown here in a passport photo, Many was born in New York City in January 1858, the only son of Mary Ellis and Lewis Many, who owned a hardware store in Brooklyn.  He was baptized in New York City’s St. Clements Episcopal Church.  Both parents died while Stanley was still young, his mother when he was just 12, his father when he was 19. Years later Stanley told a census taker that he had left school after the fifth grade.

Cast on his own, the youthful Many gravitated to Chicago where he found employment with a liquor store at 15-17 Dearborn Avenue owned by Caleb W. Webster, a successful wholesaler.  There Many also met Norris Blanc, likely Webster’s bookkeeper.  Five years younger than the New Yorker, Blanc was born in Trinidad, British West Indies, and had immigrated with family members to the U.S. in 1874 as a boy of eleven.

When Webster decided to retire in 1891, the two men bought the business, calling it Many, Blanc & Co.  Many served as president of the firm, Blanc was the secretary and treasurer.  From the outset the partnership was successful and after ten years at the Dearborn address, they were impelled to move to larger quarters at 227 Randolph Street.  Among their liquor brands were the proprietary “Old Ethyl Bourbon,” “Oversea” and “White Top,”  all trademarked during 1905 and 1906. The company also distributed national brands like “Old Cabinet Whiskey,” “Old Crow Bourbon,” and “Mount Vernon Rye.” 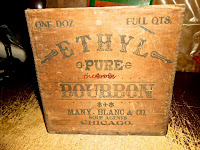 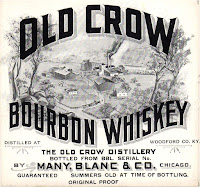 From the beginning Many, Blanc made selling cigars, both imported and domestic, an important parallel business with liquor sales.  Thus, when Carrie Nation, the hatchet-swinging prohibitionist came to Chicago, the partners must have been attentive to her rants. She had made it very clear where she stood:  “No man who drank or smoked could ever come nearer to me than the telephone.  I’d say, I won’t let you, you nicotine-soaked, beer-besmeared, whiskey-greased, red-eyed devil, talk to me face to face.” 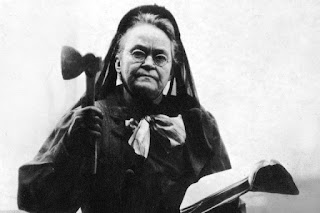 During Mrs. Nation’s blitz into Chicago her disciples already were on the rampage, having smashed four drug stores and holding a fifth hostage.  For her part Carrie, according to biographer Robert Lewis Taylor, was found fulminating on Chicago street corners with “repetition of her curses against whiskey, smoking, sin….  Probably listening in amusement, Many and Blanc continued to sell great quantities of both whiskey and stogies. 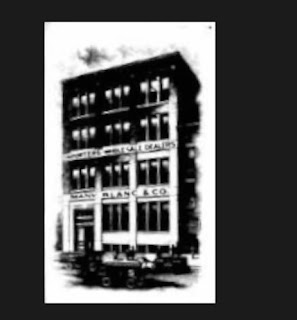 Suddenly Norris Blanc, only 35 years old, died.  Perhaps as a memorial to him, Many never moved to change the name of the company.  Soon, however, he took a new partner named Fred L. Koehn who had been the company bookkeeper.
After Blanc’s death the new partnership added a move to West Kinzie Street and finally to 7-11 West Illinois in 1913. 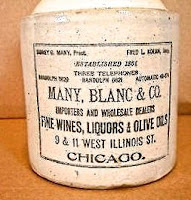 There the firm appears to have emphasized wholesale trade, selling whiskey in large ceramic containers to the dozens of saloons to be found throughout the Second City.  Like other wholesalers Many and his partner provided customers with advertising giveaway items like back-the-bar-bottles and shot glasses. 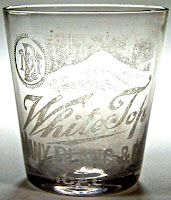 Despite his lack of formal education, Stanley Many understood what was ahead.  By 1918 the cries of Carrie Nation and her ilk were being widely heard and Temperance forces were limiting the whiskey trade locality by locality and state by state until National Prohibition was inevitable.  Many determined to leave the liquor trade and concentrate on cigars.  He bought the Shrine Cigar Company, a prominent Chicago tobacco retailer and absorbed its management. 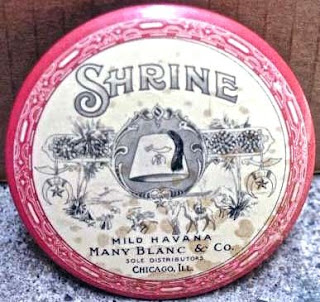 The Feb. 16, 1918 edition of the U.S. Tobacco Journal announced:   “Many, Blanc & Co., for years one of the foremost liquor and cigar importing and distributing houses in Chicago, are embarking in the cigar manufacturing business and will market the "Shrine" line of clear Havana goods in a variety of attractive sizes and packlngs, made under their own supervision.”  Shown here is one of the packages.

A section of their four story building on Chicago’s West Illinois Street was converted into a “modern new” cigar factory.  When this facility proved too limiting, Many bought a  “dancing pavilion” in Frankfort, Michigan, and converted the building into a cigar factory employing 100 people.  The company also continued to be distributors in their region of “Gorfein’s Garcia Grande” and other lines of cigars.  R.G. Dun, a popular cigar line out of Detroit, signed on with the Chicagoans. 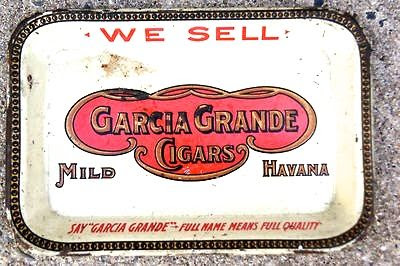 The passport photo of Many that opens this post was one of several items that signaled his company’s pivot to cigars.  Stanley was preparing to leave for Cuba with a newly hired expert to purchase Cuban tobacco for his cigars.  A 1918 letter on company stationary to the State Department about the trip omits any mention of liquor, depicting Many, Blanc as olive oil importers. Not strictly a business trip he also took his wife with him to Cuba. 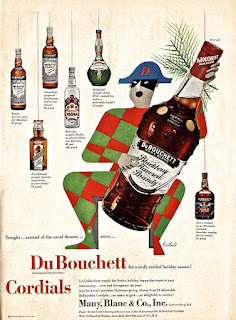 Stanley Many’s strategy worked.  The manufacturing and sales of tobacco and cigars allowed the company to survive the 14 “dry” years between 1920 and 1934.  With Repeal, the company immediate went back into the liquor trade, but specialized in liqueurs and cordials.  Many, Blanc & Co.’s first post-Repeal trademark was for a brand of kummel, a sweet drink flavored with caraway and other herbs. It also registered a series of cordials under the DuBouchett name. What if any role Many played in the company at that point is unclear.  In 1934 he would have been 76 years old. 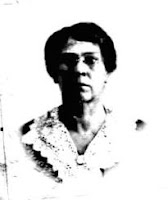 The 1940 census found Stanley and his wife, Anna, living outside of Chicago in Washington Township, Will County, Illinois. She is shown here on her passport photo. They were retired and had owned a substantial home there since at least 1935.   Stanley Many died in 1944 at the age of 86 in Broward County, Florida.  I have been unable to locate his place of burial.

Obviously under different management, Many, Blanc & Co. was purchased in 1945 by  Schenley Industries that kept the name but moved the headquarters to Lawrenceburg, Indiana.  By the time the name was finally dropped years later Many, Blanc had survived an almost unprecedented seven decades.  Despite the Carrie Nations of America, Stanley Many had proved that liquor and tobacco conjoined could survive the worst the zealots might inflict.