In 1903, the New York Sun proclaimed Jerome, Arizona, to be "the wickedest town in the West.”  As the proprietor of the Fashion Saloon, Johannes “John” Keller knew that his establishment, advertised as “The Leading Sporting House in Northern Arizona,” was an important element in that reputation.  There is no reason to believe Keller cared. 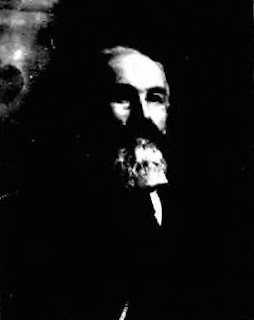 Shown here in a passport photo about age 40, Keller was born in Oberlengingen, Wurttenburg, Germany, in 1880.  When he was just thirteen, likely with family members, he came to the United States, embarking from Bremen, Germany, aboard the steamship Darmstadt, shown below.   Keller seems almost immediately to have headed for the Arizona Territory, settling for a time in Prescott, a town noted for its “Whiskey Row.”  He may have learned the saloon keeping in one of those drinking establishments. 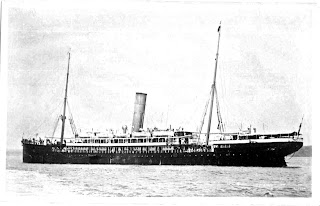 What would have brought the German youth to Jerome is unclear.  The 1890s had been important decade for what heretofore had been a small mining camp at the edge of a low mountain called Cleopatra Hill.  Eastern money men, seeing a future in copper mining, built a small smelter there and constructed wagon roads connecting it to larger Arizona towns and a railroad junction. 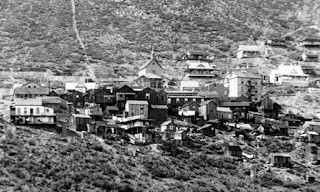 Shown here as it looked in 1893, Jerome’s population grew from about 250 in 1890 to more than 2,500 by 1900.  By then its United Verde Mine had become the leading producer of copper in the Arizona Territory, employing about 800 men, and was one of the largest mines in the world.  Experts have attested that the copper deposits of Jerome were among the richest ever found, with an estimated value of $1 billion. 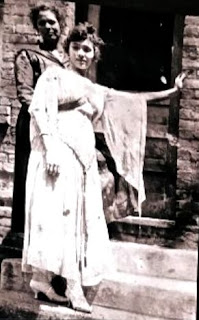 By 1900 Jerome boasted a post office, a school, a public library, churches and a downtown with telephone service and electric lights.  Holding a population that was 4/5ths male, the town’s fleshpots were thriving.  Saloons, gambling parlors and prostitutes proliferated, the last, as shown here, openly plying their trade on the streets.  Looking at Jerome from 2,400 miles away the New York Sun declared it “the wickedest town in the West.” 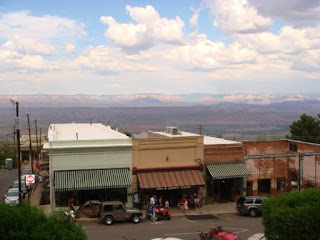 Meanwhile, Keller, aware that fires had ravaged Jerome and its wooden buildings repeatedly in the past, set out to construct in brick the most elegant drinking and gambling establishment the Territory had ever seen.  As testimony to its construction, the building, shown here at far left in a photo, still stands today.

When it opened in the late 1890s, Keller christened it “The Fashion Saloon.”  It featured fancy chandeliers and eleven different games of chance, including stud poker, roulette, faro, craps and monte, a card game of Spanish origin.  In the rear was a stage for musical and dance performances; the basement held a beer and lunch hall with separate rooms for couples and families.  Elements of the Fashion Saloon’s interior have been reconstructed at the original site by the local historical society. 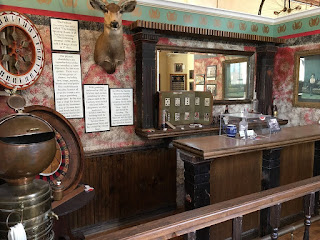 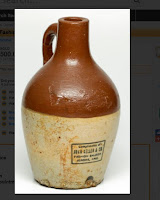 In addition to selling drinks over the bar Keller apparently was retailing whiskey received by the barrel via the railroads and bottled in his own establishment.  He  sold the liquor in ceramic jugs or glass containers.  Half-pint jugs bearing the name “Fashion Saloon” have drawn considerable collector interest.

The jugs feature both medium and dark brown tops and an underglaze label.  Those containers would have been given away to special customers, possibly at holidays.  Free in their own day, today these jugs command fancy prices.  As shown below, the Jerome museum also contains a variety of old glass bottles found around the town but I have been unable to establish any belonging to the Fashion. 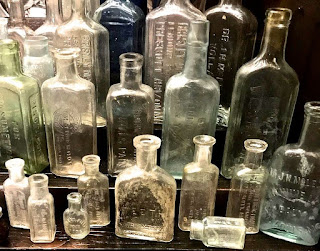 After running the Fashion for about 25 years, Keller was forced to shut the doors on his saloon and gambling hall in 1915 when Arizona, with women allowed to vote, passed laws prohibiting the making or sale of alcohol. He soon fetched up as the manager of the Connor Hotel.  Built by a local businessman in 1898, the hotel for a time was the height of luxury. Originally designed with 20 rooms upstairs, the lodging house also offered a barroom, card rooms, and billiard tables on the first floor. Rooms rented for $1.00 per night.

Under Keller’s management the Connor continued to enjoy a reputation as one of the finer hotels in the boom-and-bust mining towns of the West. The hotel had its own bus for delivering guests to and from the train depot and was full to capacity much of the time. It was one of the earliest buildings in Jerome to be fully wired for electricity, and each room had a call bell for service. Keller and his wife lived there. 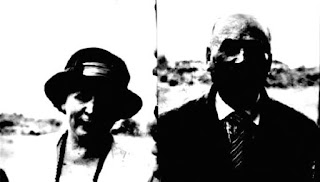 Because he seemed always to avoid the Federal census taker, little is known about Keller’s personal life.  He was married and his wife appears with him in a 1924 passport photo.  Her name and other details about her background, possible children, and other details remain to be filled in.  In the post-Prohibition years, Keller made several trips to Europe, recorded on passport applications.  In 1919 he returned to Germany to see his aging father.  In 1922, ostensibly on business, his itinerary included Germany, France and England.  In 1924, taking his wife with him, the couple visited the same three countries, adding Switzerland, Holland and Belgium.  This time the objective stated was “travel and business.”  On the application, Keller reassumed his original given name, “Johannes.”

Meanwhile the fortunes of Jerome were beginning to reverse.  Fires continued to ravage the largely clapboard downtown and periodically had to be rebuilt.   One observer has noted:  “In 1918 underground mining phased out after uncontrollable fires erupted in the 88 miles of tunnels under the town. Open pit mining brought dynamiting. The hills rattled and buildings cracked... the surface began to shift and sections of the business district slid downward.”  Among the damage, the town jail slid 225 feet and ended up across the road from its original site. 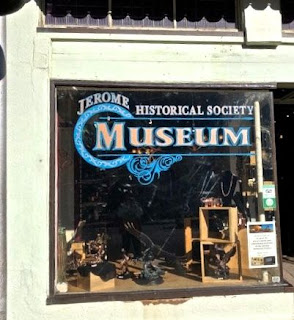 Despite these setbacks, Jerome today is not a ghost town, still boasting a population of about 450 and offering a number of attractions to visiting tourists.  Keller’s “Leading Sporting House in Northern Arizona” today is the Jerome Historical Society Museum, containing artifacts of the mining town’s heyday. The Connor Hotel once again is open for business, offering a “Western lodging experience.”

Note:  So far I have been unable to ascertain much about Johannes Keller’s private life or his date of death and place of interment.  My hope is that, as has happened with some frequency in the past, a sharp-eyed reader will see this post and provide additional information about this extraordinary saloonkeeper.

Posted by Jack Sullivan at 1:23 PM