Foreword:  In profiling some 750 stories of people involved in the U.S. liquor trade I have been struck by the traditional togetherness of whiskey families: sons working with fathers,  brothers working with brothers, wives assisting husbands, in-laws collaborating.  Upon occasion, however, situations arise in which family unity is shattered by situations involving internal bickering, jealousy, or apparent greed.  Profiled here are three such cases involving internecine feuds.

On January 16, 1902, seven jurists of the Court of Appeals in Annapolis heard a case that pitted quarreling members of a wealthy family and their high powered attorneys disputing over the operation and future direction of a well known Maryland distillery. The Wight family internal feud had been the “talk” of Baltimore society for months. 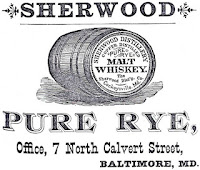 John J. Wight about the time of the Civil War had co-founded a distillery in Cockeysville, Maryland, seventeen miles north of Baltimore.  He called it the Sherwood Distillery Company.  In time his brother in law, Edward Hyatt, and son, John Hyatt Wight, became part owners of the business.  The family prospered greatly from making whiskey and ranked high in Maryland business and social circles. 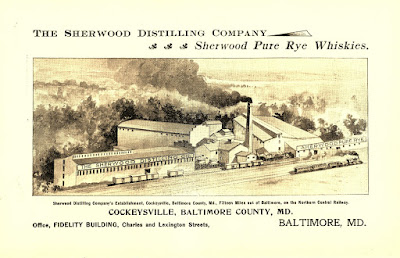 Family solidarity began to unravel when John J. Wight died.  His estate transferred most of his stock to his son, John Hyatt Wight, who became secretary and treasurer of Sherwood Distilling, with Hyatt as president. In 1894, Edward Hyatt died. John Hyatt Wight became president of the company. Hyatt’s widow Charlotte, who had remarried, in 1899 filed a lawsuit against her nephew, accusing him of fraud. Daily vs. Wight became a much-watched case in the Maryland courts.

Because considerable amounts of money were at stake, both sides hired high profile lawyers.  As Maryland’s social set looked on with intense interest, the intrafamily battle raged fiercely before a Circuit Court  judge in Baltimore.  Aunt Charlotte made a range of scurrilous charges against Wight, accusing her nephew of “cooking the corporation books,” concealing distillery profits, and lining his own pockets at her expense. When the judge disagreed and threw out her petition, she appealed. In 1902 The Maryland Appeals Court totally dismissed Charlotte’s charges, commenting that “trifles as light as air” had become for her “confirmation as strong as proofs of holy writ.”  John Hyatt Wight continued to run the distillery until the advent of National Prohibition.

Trademark disputes over liquor branding never failed to gain attention in the pre-Prohibition era.   When the conflict involved brother against brother in the distilling hotbed of Louisville, Kentucky, interest could be intense. That is the situation that faced the Bonnie brothers when one of their siblings broke away, started a completing company, and merchandised whiskey with the Bonnie name and a familiar-looking label.

The Bonnies were four:  Frank W., born 1840;  William O., 1845;  Robert T., 1848, and Ernest S., 1860.  All of them settled in Kentucky where Frank founded a liquor wholesale house about 1872 in Louisville and brought in brothers William and Robert. In 1879 the firm reorganized and all four Bonnies, including youngest brother Ernest, were included in its operations.  The resulting “Bonnie Bros. Co.” became prosperous, thrusting the brothers into the forefront of Kentucky whiskey men. 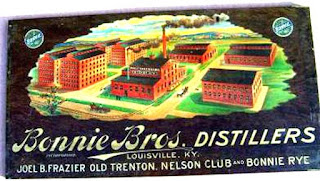 In 1895, Frank Bonnie, age 55, withdrew from the firm, selling his interest in the business, including the Bonnie brand names, to his remaining three brothers.  Frank’s exit was followed in four years by Ernest Bonnie, still in his 30s, wanting out.  Why he broke away has not been explained.  The remaining two brothers bought him out for $70,000, more than a million in today’s dollars.  For that compensation Ernest sold all interest in the business and in Bonnie labels. 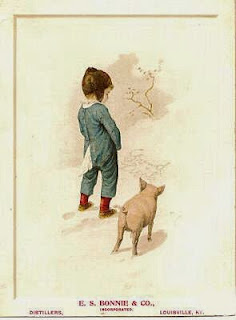 Unlike his brother Frank, however, Ernest Bonnie had no intention of retiring from the whiskey trade. Taking two Bonnie Bros. employees with him, he shortly thereafter went into competition with his siblings using the name, E.S. Bonnie & Company.  A trade card with that company name appears on an intriguing trade card showing a boy urinating in the snow and tracing the words “Good Drink.”  Was this a symbolic gesture by a younger “breakaway” who was trying to send a message to his older brothers?  More important,  Ernest Bonnie began selling whiskey under the brand name, “Bonnie Club.”  His older siblings quickly objected that the brand pirated labels of Bonnie Bros.  After a rancorous exchange of correspondence in which court action was threatened Ernest abandoned the use of “Bonnie Club.”  But family ties had been badly ruptured.

When Ernest died in 1907 on 47 years old, his employees, now the owners, attempted to market a “Bonnie & Co. Rye” with a label that was very similar in its features to the original firm.  William and Robert Bonnie had had enough and in 1914 took their competitor to court for trademark infringement.  Kentucky courts asserted that Bonnie & Co. Rye had been labeled in a way to confuse and deceive consumers, represented “unfair competition” under the trademark laws, and issued a “cease and desist order.”  The Bonnies won. 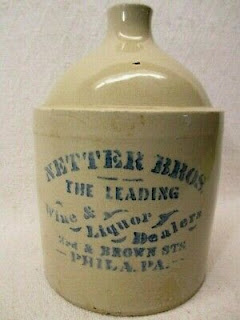 Henry, Seligman, David, and Theodore — the Netter boys — founded a liquor store in Philadelphia about 1886 that almost immediately prospered.  Within three years the brothers moved to larger quarters at 732 Third Street, near Brown Street.  This address is memorialized on an amber flask shown below.  The trade mark, in detail, is an enigmatic one:  a woman standing next to a shield inside the Man in the Moon.  The company used the brand name “Golden Gate All Rye.”  Their Netter Bros. Company became one of the premier liquor houses of Philadelphia.  After seven years of prosperity, however, family ties began to unravel.

The first brother to defect appears to have been Henry.  In 1893 directories Henry H. Netter & Co. was noted as: “Producers of California and Ohio wines and brandies and Pennsylvania rye whiskies.” The next Netter to break away was David in 1898, opening a separate store on Market Street.  He was listed in business directories as a wine & liquor dealer, importer, distiller and proprietor of “Telegram Rye.”  Seligman, perhaps about 1900, opened his own liquor outlet under the name “S. Netter.”  He located at several addresses on North Third Street until 1911 when he moved to 736 Arch Street. 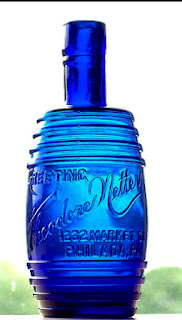 Although Theodore Netter was listed with Netter Bros. until 1900, at least one author, rightly or wrongly, has blamed him for the breakup, citing him for fueling intra-family tensions and causing his brothers to depart. Sometime in the late 1890’s Theodore, with his wife, Hilda, established their own liquor business.  After initially locating at 54 North 13th Street, the firm moved to its permanent base on Market Street, next to Philadelphia’s Savoy Theater.  Theodore's purple barrel bottle is a favorite of collectors.

Was Theodore the problem child who broke up the Netter Brothers?  He had a penchant for running afoul of the Pure Food and Drug laws, being fined at least twice for adulterating his wines.  Nevertheless, this Netter claimed that his was, “the largest and leading liquor store” in Philly.  In his advertising Theodore also constantly emphasized that he had only one store -- indicating that he saw his brothers in definite competition.  Because the Netters never took their differences into court and aired them publicly, however, the reason why the brothers all went their separate ways remains unanswered.

Note:  More complete vignettes on each of these families can be found elsewhere on this blog:  Sherwood Distilling and the Wights, July 17, 1911;  Bonnie Brothers, April 29, 2014, and Netter Brothers, January 2, 2013.

Posted by Jack Sullivan at 5:54 AM