Foreword:  Among those whom I have profiled as “whiskey men” are a number of individuals whose interest in making and selling liquor resided in the potential for profit.  They were capitalist “money men” and sometimes said so to the census taker.  Of them I have selected three who represent a range of “financiers.” 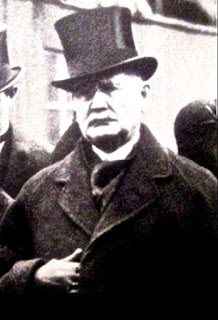 Shown here at 70, Edson Bradley growing up probably  could not tell sour mash from sweet corn, but in maturity he turned whiskey-making into abounding wealth. Bradley was born into money, well educated and eventually trained for a career in finance. While still in his twenties he became associated with Paris, Allen & Company, a leading New York and London financial and importing firm.

Although the whiskey industry has always emphasized the backwoods, rustic nature of distilling, the truth is more complicated. New York Wall Street investors frequently were directly involved in the liquor trade. Almost immediately upon joining Paris, Allen the youthful Bradley was anointed the principal spokesman on Wall Street and before Congress for the new Whiskey Trust the company financed in Kentucky during the 1880s, including the "Old Crow" distillery below. 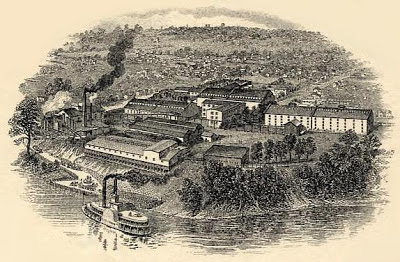 As a driving force behind the Trust, Bradley soon became a national figure.  In the process he also was becoming wealthy. Soon the nation’s newspapers were referring to Bradley as a liquor millionaire and kingpin of the American distilling industry. About this time he moved his family from New York City to Washington, D.C.  He bought a large Victorian home on fashionable DuPont Circle and tore it down to build the grandest mansion the Nation’s Capitol had ever seen.

Retired at 70 and enormously rich from whiskey profits, Bradley left Washington, moving to fashionable Newport, Rhode Island.  Incredibly, he took his castle with him.  Brick by brick, tile by tile, the mansion was dismantled and transported to Rhode Island while the fascinated populace of Washington looked on. Ripley’s “Believe It or Not” highlighted the event for a national audience. In Newport Bradley purchased a large existing home and joined the two structures to become one of the largest mansions in America, shown here.

Beginning as a grocer and drug salesman, by 1900 George Carragan of Bayonne, New Jersey, early built a reputation as New York financier.  He was the “financial head” of August Kress & Co., importer of grocer specialties; directed the wholesale commission house of R. B. Poucher & Co; and co-owned Carragan & Tilson, a New York company that manufactured badges, rubber stamps, stencils, and seals.  Back in Bayonne he was a founder and director of the Mechanics Trust Company and later the First National Bank.  Said his biographer:  “These various business associations indicate in a small measure Mr. Carragan’s ability and success as a financier. 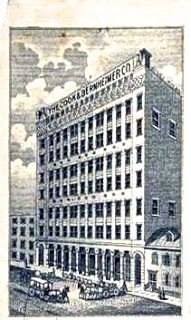 When Carragan engaged with Cook & Bernheimer, a New York whiskey wholesaler, is not clear.  Founded in 1863, the company had been in business for some years before he became involved, investing in it and ultimately becoming its president.  Carragan's leadership was evident in the late 1890s when the liquor firm had a burst of energy, operating from a large building at 144-150 Franklin St. in Manhattan, shown right, and opening offices around the country: In Chicago on Wabash Avenue in 1897, a year later in Cincinnati, San Francisco and Terre Haute, Indiana.  Cook & Bernheimer took a gold medal for the company’s flagship “Old Valley Whiskey” at the Paris Exposition of 1900.

Under Carragan’s direction Cook & Bernheimer also obtained an exclusive contract to bottle and distribute “Mt. Vernon Whiskey,” distilled by the Hannis Company of Baltimore and Philadelphia. Featuring a blizzard of brands, including "Old Valley,"  the company commanded all or part of the output of numerous distillers in Pennsylvania, New York, and Maryland.  In 1905 Cook & Bernheimer took control of the Dalwhinnie Distillery in the Scottish Highlands, marking the very first U.S. investment in the Scotch whiskey industry. 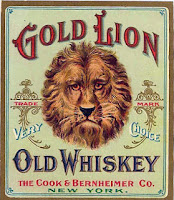 The Scottish adventure ended in 1920 with the imposition of National Prohibition when all legal sales of alcoholic beverages in the U.S. were forced to cease.  After more than a half century of successful operation this juggernaut among liquor houses closed its doors for good.  George Carragan lived on another five years, dying at the age of 81 at his Bayonne residence. 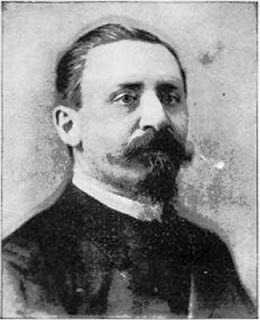 Led by Warren Buffett,  Omaha, Nebraska, boasts that it has more millionaires per capita than any other city in America.   Peter E. Iler, an Omaha whiskey man, was an exemplar for the local money men to follow, a multimillionaire who built the Nation’s third largest pre-Prohibition distillery as well as financing other major business enterprises. Shown left, Iler had, people said, “the restless mind of a capitalist.”

Every capitalist needs capital and Iler had achieved a bundle, apparently some of it through a fluke.   He and his brother had bought and prepaid for a shipment of bourbon from Kentucky.  Through an unexplained stroke of luck, the federal tax on alcohol changed while the bourbon was in transit, increasing the value of the shipment by a whopping $36,000, instantly making the Ohio storekeeper a wealthy man. Evincing his restless mind, about 1883 Iler decided that his fortune lay by going west. 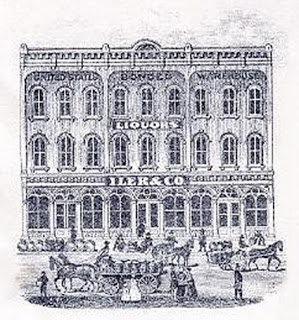 About the same time, the Willow Springs Distillery on the Council Bluffs, Iowa, side of the Missouri River was closed by the Federal Government for nonpayment of taxes.  Sensing an opportunity,  Iler bought the distillery and moved it across the river to Omaha, becoming the first (legal) distillery in Nebraska. Iler subsequently set up local sales offices at the building shown here,   He also began a steady expansion of the relocated Willow Springs Distillery. 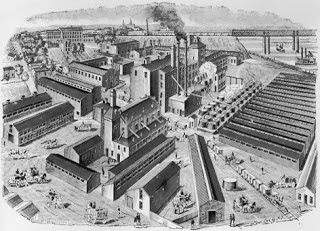 Eventually Willow Springs became the third largest distillery in the United States and paid government taxes of more than $2,000,000 annually, including providing 90 percent of Nebraska’s tax revenues.  When labor riots of broke out in Omaha in 1882, the Governor dispatched the National Guard to protect Iler’s “cash cow” facility.

After years making whiskey in Omaha Iler about 1990 obtained options on 3,500 acres fronting on San Francisco Bay at San Bruno Point and incorporated the South San Francisco Land and Improvement Company, taking personal charge of the development.  This foray seemingly indicated Peter’s declining interest in distilling or perhaps a premonition of Prohibition.  Whatever the cause, he sold the Willow Springs Distillery.  Continuing to be active in business until about 1912 when he retired, Peter Iler had proved himself a worthy predecessor of Warren Buffet and other Omaha millionaires.

Posted by Jack Sullivan at 6:43 AM