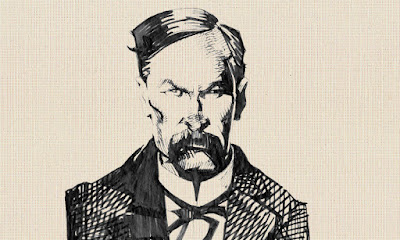 Milton Edward Joyce, proprietor of the Oriental Saloon in Tombstone, Arizona, has been called “one tough old bird” and, as above, pictured as a mean-eyed Western gunslinger.  Most often cited is Joyce’s violent clash in 1888 with the notorious “Doc” Holliday. “…That’s just one small slice of this remarkable man’s life” argues one observer, noting that the characterization ignores Joyce’s civic and business contributions.  Both depictions are valid.  There were two sides to Milton Joyce. 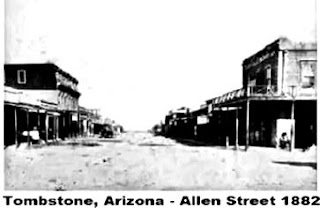 Born in New York in 1847, Joyce arrived in California in 1862 at the age of fifteen. He was recorded in the 1870 Census working as a blacksmith in San Mateo, California, twenty miles from San Francisco.  By 1880 he had moved to Cochese County, Arizona, when silver was discovered there, initially recorded as a miner living in Tombstone.  Founded in 1879 this boomtown quickly attracted a mix of those digging for treasure and gamblers, scam artists and gunslingers looking to take it from them. 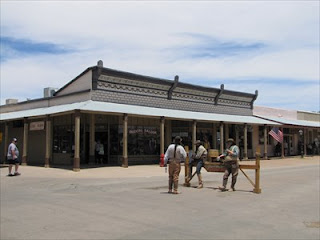 A proliferation of drinking establishments marked Tombstone — more than fifty for a population of 3,000.  Having accrued some money from mining, Joyce opened a his own richly furnished saloon, shown here, on Allen Street and called it  “The “Oriental.” It was hailed by the Tombstone Epitaph, the local paper, as the most elegant saloon, “this side of the Golden Gate.”

The Oriental boasted twenty eight gas chandeliers that, as the reporter rhapsodized, made the barroom “sparkle like a December iceling in the sunshine.”   The bar was carved, furnished in gilt and capped with a highly polished top. The saloon had two rooms, the main bar and behind it a club room furnished with plush carpets and ivory ornamentation.  There Joyce leased out gambling concessions, including briefly to Wyatt Earp, right. 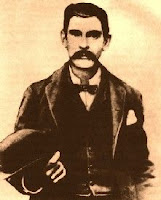 For all the glitz and glitter, however, the Oriental Saloon was still located in a rowdy and sometimes dangerous Western town.  Gunfights on the main drag, Allen Street, were frequent.  Joyce would gain his tough guy reputation by taking on the notorious dentist cum gunman, John Henry “Doc” Holliday, left.  Lectured by Joyce for starting a row in the Oriental, the drunken Holliday stormed out of the saloon, looking for a gun. Finding one, he returned and opened fire.  Unsteady in his aim the Georgia-born dentist sprayed bullets around the barroom, striking a bartender in his right foot, tearing off his big toe.  Joyce, who was carrying a six-gun, fired back but missed.  Joyce then attacked Holliday with the butt of the gun and beat him senseless.  Only then did the saloonkeeper realize he had been hit by a shot in the hand and was bleeding copiously.Local police authorities rushed to the scene and escorted Joyce to medical help. 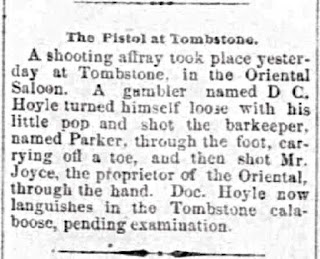 For a while it appeared that the saloon keeper might lose his hand.  Meanwhile, surviving his pistol-whipping by Joyce, Doc Holliday was arrested by Deputy Marshall Wyatt Earp on a complaint filed by Joyce.  He was held in the Tombstone jail on $200 bond which he paid and was released.   The Arizona Weekly Citizen covered the story but mistakenly called him “Hoyle.”  A matter of months’ later, after the famed “Gunfight at OK Corral,” everybody in the state knew who Doc Holliday was.

On October 12, 1880, Holliday appeared in court in the custody of the town marshal.  None of the prosecution witnesses appeared in court. The defendant offered a plea of guilty to assault and battery. It was accepted and the charge of assault with a deadly weapon was dismissed. Holliday was fined $20 and costs of $11.25.”  In the same period the Epitaph was reporting regularly on Joyce’s condition, noting on October 24:  “During the past day or two inflammation set in on M.E. Joyce’s wounded hand and at one time it looked as though amputation would have to be resorted to in order to save life. Yesterday, however, showed a change for the better, and chances of saving the hand are much improved.” In the end Joyce had a complete recovery. 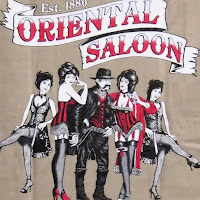 At the restored Oriental saloon Milton Joyce today is depicted as a hard-eyed gunslinger surrounded by cleavage-baring, high-skirted dancing girls.  That fanciful image is balanced by the “other” Joyce.  The only photograph I can find is of a man with gentle Irish eyes and a benign expression, shown below.  This is the Milton Joyce who is said to have advanced community benefits wherever he lived. 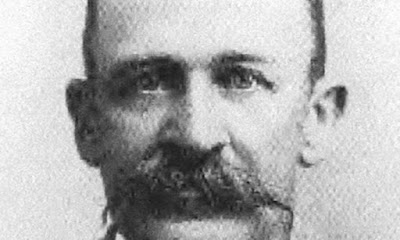 In 1881, the appointed Governor of Arizona, John C. Fremont, the famed explorer, first Presidential candidate of the Republican Party, and former Civil War general, was called upon to create a Board of Supervisors for Cochese County.  Fremont selected Joyce as one of three.  The saloonkeeper subsequently was named its chairman. 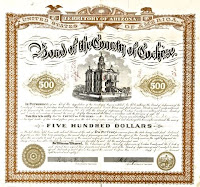 Among Joyce’s first acts was to advocate strongly for a new county courthouse.  Through his efforts a county-backed bond issue of $500 for its construction was authorized.  Shown here the bond was signed by Joyce.  A town landmark when completed in 1882, the court house, shown below, has been restored as a historical site.  During his years in Arizona, Joyce also invested in land, mining and other businesses. 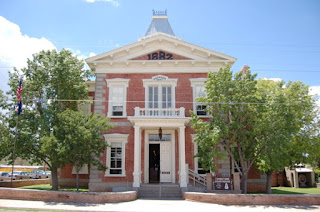 The Oriental saloon burned in the Tombstone conflagration of 1881, spreading so quickly that Joyce was not able to save anything, watching hopelessly as his carved bar, chandeliers, and plush carpets went up in flames.  Although the building was quickly reconstructed on site, the next year saw the Oriental once more threatened by fire but saved.  By this time Joyce appears to have become increasing disenchanted with his life in Tombstone.  When an opportunity arose in 1883 to join a group of local residents on a prospecting expedition to find gold in Baja Calfornia, he joined.

The expedition turned out to be a “fool’s errand.” The group took a train south to the Sonoran port of Guaymas in Mexico, sailed across the Gulf of California, then tracked inland to the deserts of Baja, near Mission Santa Gertrudis.  This “gold rush” was doomed virtually from the beginning as the strikes quickly petered out.  The Tombstone party, like others lured by the prospect of riches, not only failed to find gold but suffered from extreme heat and lack of water. 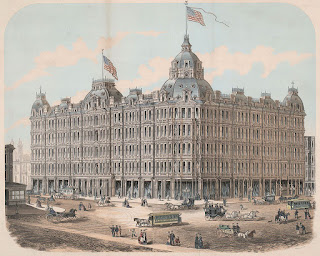 The expedition brought Joyce back to California, however, where it may have rekindled memories of his early day in the San Francisco area.  In 1884, he sold the Oriental and headed back to the Golden Gate.  Reported as having “accrued a fortune” in Arizona, Joyce with a partner opened a saloon and billiard parlor on the ground floor of the swank Baldwin Hotel downtown.  Shown here, the hotel was owned by Comstock Lode millionaire Elias “Lucky” Baldwin.  Apparently noting the profitability of Joyce’s enterprise, Baldwin after four years decided to take charge of the property himself.

Joyce and his partner promptly opened a new establishment and named it Cafe Royal.  The Daily Alta newspaper called it “the finest saloon and billiard hall on the Coast.”  About the same time, the bachelor Milton met, wooed and married a woman 14 years younger than himself.  She was Louise Mockler, a native Californian of German ancestry. 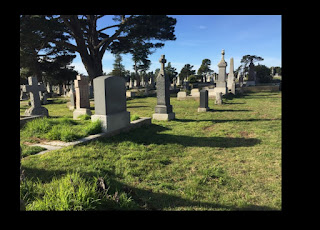 Their wedded life was short.  Married in February, Joyce died of tuberculosis at his home on Van Ness Avenue the following November.  He was only 42 years old.  He may have known he had a fatal disease at the time of his nuptials.  Joyce was given the funeral rites of the Catholic Church and buried in Holy Cross Cemetery in nearby Colma.  Joyce left his ample estate to his widow, Louise.  She remarried five years later.

Joyce’s San Francisco obituaries emphasized his wealth and contributions to the public weal including memberships in the Knights Templar, Odd Fellows, and Knights of Pythian.  There he was remembered, not as a Western “tough old bird,” but as a civic minded, successful entrepreneur, popular with his patrons and the local business community alike.  His showdown with Doc Holliday was left unmentioned. 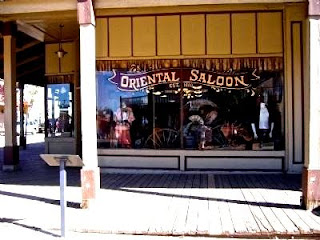 Not so in Tombstone.  After Joyce sold the Oriental, it operated as a saloon for the next 30 years until Arizona went “dry” in 1914.  The building became a drug store and later was occupied by a series of tenants.  Tombstone was rescued from being a “ghost town” when the 1881 gunfight became a mainstay of Western lore.  Numerous dramatic, fictional, and documentary works have been produced about the event.  With more than 400,000 tourists visiting the town annually, the building has been restored as a saloon under its original name. There, for the edification of visitors, Milton Joyce is depicted as a gun-toting tough guy who once pistol whipped Doc Holliday almost to the point of death.

Posted by Jack Sullivan at 7:51 AM