An Outlaw & 5 At the Maverick Saloon

Over its decades-long existence the Maverick Saloon could count six proprietors, five of them apparently law-abiding Montana citizens.  But my guess is that when patrons gathered around the bar at that legendary “watering hole,” the owner about whom the stories were spun endlessly was the Outlaw Lonnie Curry. 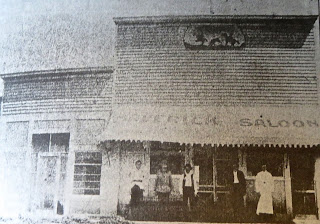 In the late 1890s the saloon, shown above, was constructed in Harlem, a town in Blaine County, Northeast Montana, located on the Milk River and adjacent to the Canadian border. The Fort Belknap Indian Reservation is just outside its limits. A postcard of Harlem's main street, unpaved and rutted, indicates the rustic pioneer nature of the town. 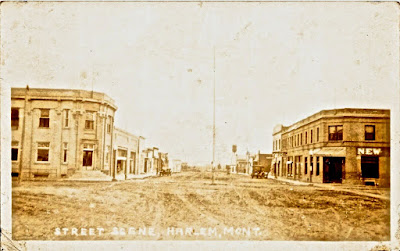 The man who built the saloon was George Bowles, a transplanted Kentuckian who had fought for the Union in the Civil War.  He went west initially as a stage coach driver and became a rancher.  Bowles was operating the drinking establishment under the name Club Saloon when in July 1899, Lorenzo Dow Logan, aka Lonnie Curry, one of the most dangerous outlaws in America, dropped into Harlem. 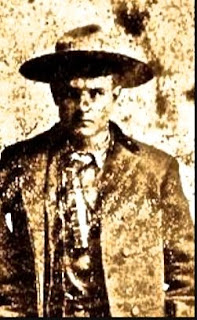 A member of the notorious Wild Bunch and Curry/Logan bandit family, Lonnie was on the lam from a train robbery in Wyoming.   Shown here, Curry immediately rented a house in Harlem, declared the intention of settling down, and reunited with his wife Elfia and their two children.  This sequence likely was a ploy to establish an alibi if arrested for the train robbery.   Four days after he arrived Curry approached Bowles about buying a half interest in the Club Saloon.

Given the gunslinger’s reputation, it clearly was an offer the proprietor could not refuse.  The drinking establishment was renamed the Bowles and Curry Saloon.  Lonnie became very active in the Harlem community and made friends of some of its leading citizens.  He began to wear suits and sprouted a mustache.  Like other townspeople he participated in the initial printing of a town newspaper, the Harlem Enterprise.  As one resident put it, the Curry became popular because of his willingness “to help a fellow out.”

Four months later a Curry cousin and fellow outlaw named Bob Lee arrived in Harlem, identifying himself as Lonnie’s brother, Robert.  On November 25 the two men concluded a deal with George Bowles making them the sole owners of the saloon.  Again, Bowles knew well enough when to get out.  The cousins called the saloon The Curry Brothers’ Place.  They immediately began to redecorate the interior in order to attract Harlem’s elite to their drinking establishment.  A talented fiddle player, Lonnie himself was a draw, often called upon to provide the entertainment.

Curry’s high profile in Harlem led to his downfall.  As one author has speculated:  “Apparently the saloon wasn’t profitable, perhaps of too many drinks on the house and unpaid tabs.”  Dipping into the loot from the robbery, kept in a Harlem hotel safe, Lonnie tried to cash a $1,000 bank note, arousing suspicion.  Pinkerton detectives were soon on the trail. In January 1890 agents posing as itinerant cowboys came to town looking for the Currys.

Alerted to their presence Lonnie gathered up Bob Lee and left Harlem.  Late that night the pair roused a local rancher named George Ringwald and sold him the saloon for $1,000 — $300 in cash and a promissory note for the balance.  They then rode south. With them went the proceeds from a community raffle, ending Lonnie’s good reputation with the people of Harlem.  Soon after Elfie and the children departed town. 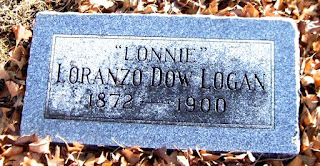 Following a circuitous route that took him through Colorado, Lonnie eventually reached Dodson, Missouri, possibly the Curry/Logan home town.  There he hid out in a house with assorted aunts and cousins.  In February 1900, Pinkerton detectives tracked him there and surrounded the residence.  When Lonnie tried to escape, they shot him down — dead at 28 years old.

Meanwhile back in Harlem, George Ringwald was now the proprietor of the drinking establishment.  My guess is that it was he who changed its name to Maverick Saloon.  Little information is available on Ringwald.  He owned a ranch outside Harlem and ran a general store near the Milk River Bridge south of town.

Fast forward to 1905.  Shown above is  a letterhead from the Maverick Saloon.  Now the proprietor was H. C. (Henry) Turner, a Harlem store owner with a progressive business approach visible in the elaborate letterhead he designed for the saloon.  In additional to adding a pool hall, he was selling wine, liquor and cigars at retail. 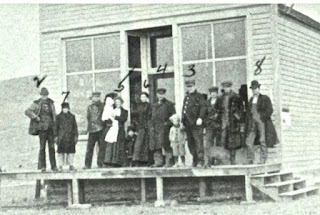 Likely using profits from the Maverick, Turner, described as an “enterprising merchant” created his own town in 1912, called Turner, a dozen miles from the Canadian border and 32 miles from Harlem.  He opened a general store and invited settlers to join him.  The front porch of the store is shown here with Turner’s wife (No. 5) holding a baby.  As Montana attracted more and more settlers, the town was booming. Turner eventually boasted a community center, bank, hardware and lumber stores, cafe and hotel, harness and blacksmith shops, pool hall and confectionary.  When a post office opened in 1917 Henry Turner was made postmaster.

About that time, the Maverick Saloon was sold to S. C. Rasmusson whose 1918 letterhead indicates that in addition to pouring whiskey over the bar he was selling liquor at both wholesale to other area saloons and at retail by jug or bottle to retail customers.  No information is available on Rasmusson, unfortunately, but he had only a short stint as proprietor of the Maverick until Montana went “dry” in 1919.  The bar tokens below can attributed to one of the owners from the saloon’s pre-Prohibition days.  Tokens were banned by the national Repeal legislation in 1934. 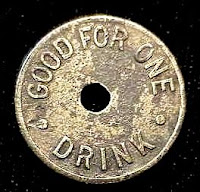 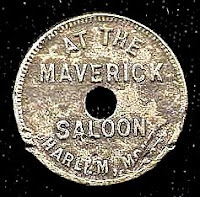 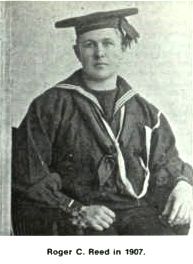 That brings us to Roger Chase Reed, the man who revived the Maverick Saloon after the demise of Prohibition.  Reed was born in August 1885 at Devil’s Lake, North Dakota, the son of James and Emma Reed.  He is shown here in his sailor uniform, having served a dozen years in the U.S. Navy.  After leaving the service and farming for a number of years, Reed owned and operated the Maverick.  He died in 1948 and is buried in the Harlem cemetery.  No subsequent owner has come to light.

With time out for the “dry” years, the building that held the Maverick and predecessors stood for five decades, a phenomenal existence for an Old West drinking establishment.  Yet my guess is that even today when the residents of Harlem tell visitors about the history of the town, precedence is given to those six months when an outlaw ran the Maverick Saloon.

Note:   Although this post is gathered from a variety of sources, the principal one was County Histories of Montana: Thunderstorms and Tumbleweeds: 1887-1987 East Blaine County.  Much of the Curry saga is from that source as are the photos of the Maverick Saloon, Turner General Store and Robert Reed.

Posted by Jack Sullivan at 6:21 AM