The Wathen Family Had “A Maverick Instinct”

Foreword: As in the past, when I have set out to write a post about a whiskey man only to find that someone else had already done it as well as or better than I could, I contact the author to ask permission to reprint it.  Although I had mentioned the Wathen family briefly in a post on April 17, 2014,  Brian Haara marvelously had profiled them and their battle against “The Whiskey Trust” on his “Sippin’ Corn” blog.  Brian has agreed to my reprinting the piece, for which I am very grateful.  Some images have been added.

Members of the Wathen family were whiskey pioneers in Kentucky, but only the basics are written about them.  At most, some writers briefly mention the Wathen family as being part of the early distilling tradition in Kentucky, and some acknowledge the family’s deft maneuvering to succeed during Prohibition by forming the American Medicinal Spirits Company (“AMS”), which was eventually sold to National Distillers.  More often, however, the Wathen family is relegated to mere passing reference (if at all), or incorrect names and dates are given to fill in chronologies in other stories (like Old Grand-Dad or National Distillers), or the name is only recognized through the current Wathen/Medley sourced brands.

In reality, lawsuits spanning over 50 years (ranging from the late 1800’s through the post-Prohibition era) provide an incredible history of family tradition, partially selling out to the Kentucky Distilleries and Warehouse Company (“KDWC” – the Whiskey Trust) and starting over with the next generation, fighting with the KDWC, battling the temperance movement, defending criminal charges, surviving through the genius of AMS, and helping position National Distillers Products Corporation as a behemoth.

There’s actually too much litigation and history for just one post, so here I’m focusing on the sale of J. B. Wathen & Bros. Co. to KDWC in 1899, and the lawsuit that led John Bernard’s (“J. B.”) son, Richard Eugene (“R. E.”), to start his own distilling company, probably with the support of J. B., and immediately poking KDWC in the eye.

But first, to set the stage, the history leading up to 1899 is important.  Henry Hudson Wathen (1756-1851) settled seven miles south of Lebanon, Kentucky in 1788.  Two years later, in 1790, he started a “very small and crude distillery” according to a family history published in a 1905 edition of The Wine and Spirit Bulletin. 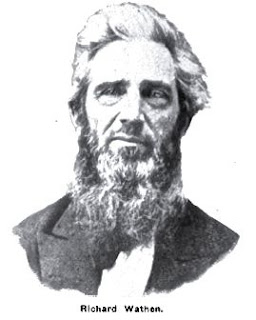 In 1852, Henry’s youngest son, Richard Bernard Wathen (1815-1880), started his own distillery just about one mile from Henry’s distillery. Richard, it turned out, became the father of perhaps the most prolific whiskey distiller brothers in American history.

J. B. built his first distillery in Lebanon, near his father’s and grandfather’s distilleries, in 1875.  By 1879, J. B. added the first non-Wathen partners to the family business, H. Mueller and Chas. Kobert of Cincinnati.  J. B. sold out of that partnership in 1880, leaving it in the capable hands of his brother, R. N. and J. A., along with Mueller and Kobert.

J. B. sold out because he had bigger plans.  He moved to Louisville and built the J. B. Wathen & Bros. Distillery in 1880 with his brother, W. H.  Their brother M. A. joined them in 1881, and by 1885 the brothers rolled the partnership into a corporation called “J. B. Wathen & Bros. Company.”  The Wathen brothers experienced incredible success and reinvested in the company by installing one of the first continuous column stills in Kentucky and installing steam heat in the warehouses.  J. A. Wathen joined his brothers in 1887 to manage the company. 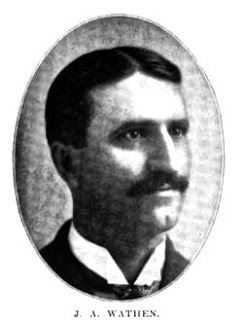 After the sale to KDWC, J. A. Wathen stayed with KDWC as an employee.  In a move that must have led to awkward dinner-table discussions, however, J. B. Wathen apparently orchestrated the formation of a new business for his sons – calling it “R. E. Wathen & Co.” after his oldest son (who was only 22 at the time) – to immediately compete with KDWC and to try to use brand names that infringed on the brand names that J. B. had just sold to KDWC.  R. E. Wathen & Co. even employed former J. B. Wathen & Bros. Co. employees, used the office space from which J. B. had run his company, and used J. B.’s equipment’

The primary brands of J. B. Wathen & Bros. Co., which of course were sold to KDWC, were “Ky. Criterion” and “Honeymoon” and the distillery was sometimes known as the “West End Distillery.”  The new R. E. Wathen & Co. called its distillery the “East End Distillery” and promoted its brands as “Ky. Credential” and “Honeycomb.”  As we might expect, KDWC sued and asked for an injunction.

The court’s July 16, 1901 ruling held that these two brands unfairly impinged on the brands just acquired by KDWC, even though consumers were not necessarily deceived. 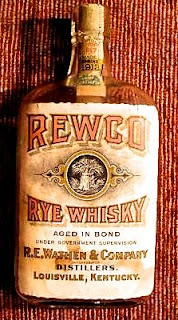 The court noted that federal law had required, since 1892, that the name of the distiller be stamped or burned upon the head of every barrel of distilled spirits (hence the origin of the term “brand name”).  The court also noted that distillers sold their whiskey in barrel lots to wholesalers, then it was sold by “drummers” to retailers, who then sold the whiskey to the public in bottles that did not necessarily include the brand name of the distiller.  KDWC apparently acknowledged that the wholesalers were not misled by the similar names used by the new Wathen company, but in possibly the first extension of brand name rights, the court still enjoined the Wathens from using “Ky. Credential” and “Honeycomb” simply to protect the brand names acquired by KDWC.

The Wathens were true Kentucky Bourbon pioneers, and like so many of the colorful characters of Bourbon legend, they had a maverick instinct and didn’t shy away from litigation.  This time though, the Whiskey Trust won the fight in court.  However, the Wathen family fought on, and succeeded with Old Grand-Dad and other brands, even thriving during Prohibition.

Note:  Atty. Haara treats the Wathen family at greater length in his 2018 book “Bourbon Justice:  How Whiskey Law Shaped America.”  The book tells the fascinating story of the importance that whiskey has played in the Nation’s history and jurisprudence.  It is available from Amazon and other booksellers.