Foreword:  This is just to announce that since my last post this blog has achieved more than 1,000,000 hits.  My thanks to all who made this possible. 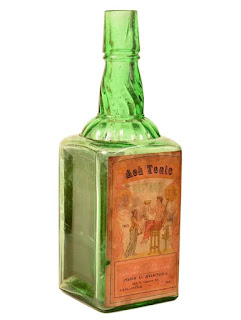 Trying to make a living for himself and his family in Lancaster, Pennsylvania, around the turn of the 20th Century,  John C. Horting,  liquor dealer and distiller, concocted a highly alcoholic remedy, he called “Ash Tonic Bitters,” claimed to cure a wide range of diseases and complaints.  He market it in a green bottle with a distinctive label. There was nothing to predict, however, that in 2020 the bottle would sell for $5,000 plus a 21% auctioneer premium. Hortings’ “surprise” had one bitters bottle collector exclaiming “Hoochie Mama!” 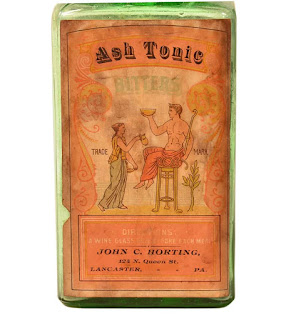 The label of Ash Tonic Bitters, shown here in detail, has a Grecian motif.  A half-nude muscular young man wearing laurel wreath and carrying a staff contemplates bowl of liquid while a comely girl in a long robe offers a refill from a pitcher in her right hand.  There is little in this picture to suggest the claims Horting made on the rear label: “…Sure cure for Dysepsia, Liver Complaint, Kidney Disorders….An infallible remedy against Fever…Colic, Cholera Morbus…Costiveness [constipation].  Ash Tonic Bitters further claimed to “…Enliven the spirits of invalids of either sex….”  The label, in both English and German, recommended that a full wine glass of the tonic be taken three times a day before meals.  Highly alcoholic, Ash Tonic might have had patients “buzzed” all day long.

The reason for this bottle fetching so outlandish a price is its rarity.  In the world of bitters collectors Ash Tonic is a previously unrecorded, possibly one-of-a-kind bottle.  The reason well may be because Hortling did not emboss the glass of his bottles with any identification.  His containers were less expensive that way, of course, but when the paper label was washed away or the bottle disposed in an outhouse, no way exist of identifying contents or manufacturer. 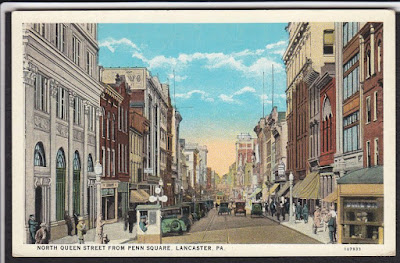 Who was John Horting?  Information about his early life and education are scanty.  He was born in February 1861 in Lancaster, Pennsylvania, the son of John Cornelius and Josephine Houghey Hortling, who were respectively 21 and 19 at his birth.  He had one sister.   According to the 1870 federal census, his father was a clerk in a Lancaster store.  Perhaps as early as 1871, however, John Sr. opened a wine and liquor store at 246 North Queen St., the major Lancaster commercial thoroughfare shown above.

It would appear that as John Jr. reached maturity, he went to work in his father’s liquor store.  After John Sr.’s death in 1888, young Horting took over the liquor house, partnering for a time with John W. Keller in a partnership called Keller & Horting.  A  bottle-shaped corkscrew bears that company name.  By 1899 Keller had departed, leaving Horting the sole proprietor of the liquor house.  Meanwhile, John had taken a bride, a native-born Pennsylvanian woman named Mary Alice. They would have one child, John M., born in 1888. 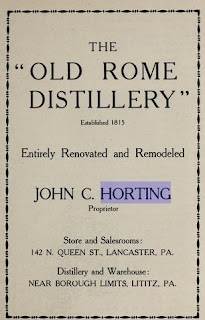 Although Horting continued to operate the liquor business he had inherited with success, he did not hit his stride until 1904 when he bought the Rome Distillery, located near Lilitz, Pennsylvania, about 14 miles northwest of Lancaster.  This distillery dated its founding to 1815 and had had multiple owners.  One of them, possibly the owner who sold, was D.D. Burkholder who advertised in 1883 “double distilled rye whiskey” and a willingness to exchange his whiskey for good rye grain. 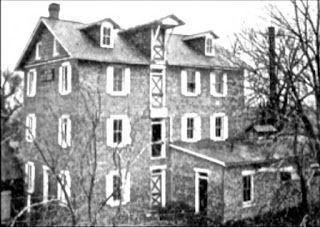 Although one account claims that Horting proceeded to tear down the original distillery and installed all new equipment, the new owner claimed in the ad shown above only to have “entirely renovated and remodeled” the facility.  His distillery, shown here, included a four story warehouse with the stillhouse adjacent.  Horting and his small family moved to Lilitz, likely living at the distillery.  Meanwhile he maintained a separate store and salesroom at 142 North Queen Street in Lancaster.

Owning a distillery allowed Hortling an assured supply of whiskey and enabled him to move into high gear.  He issued a series of proprietary brands.  They included labels that bore his name, as the two bottles shown here.  So far as can be determined, while his containers might be clear or amber, none were embossed, with only their paper labels to identify them.

Hortling trademarked only one label.  In March 1890 he filed an application with the federal government for the exclusive use of the brand, “Colonial.”  He attested that the name had been in his use since August 1896.  He bottled the whiskey in amber quarts and flasks as “pure rye.”  The quart bore the portrait of man in a tricorn headgear, presumably a colonist.  Hortling also featured “Ridge Rye."

Still another brand referenced his location, called “Lilitz Springs Straight Rye Whiskey.”  Hortling was supplying this and other brands at wholesale to saloons, restaurants and hotels in the vicinity of Lancaster.  Like other successful wholesalers he also was giving away advertising shot glasses and fancy back-of-the-bar bottles to his customers. 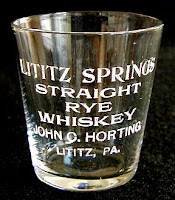 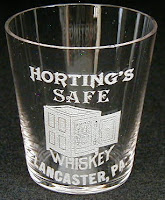 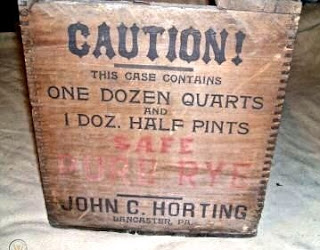 Still another label was an evident knock-off of Warner’s “Safe” Cure nostrum, a whiskey he called “Hortling Safe.”  Judging from the crate in which he shipped it, Horting’s Safe” came in quart and half pint sizes.  While not impossible, because the owner apparently used bottles without embossing, it is highly unlikely Pennsylvania diggers will unearth any identifiable Hortling bottles.  The Ash Tonic Bitters bottle is likely to remain a rarity. 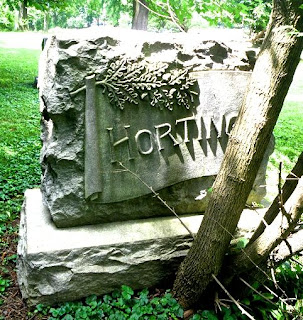 Horting personally ran the Rome Distillery for a dozen years, before turning it over to other management and moving back to Lancaster, where he apparently for a time operated a brewery.  With the coming of National Prohibition, all his activities halted.  The 1920 census found John and wife Mary living at 18 East James Street in Lancaster.  His occupation was given as “none.”  In August 1924, Hortling died at the age of 64.  The cause given was an unspecific “complication of disease.”  His funeral was conducted from his home with burial at Lancaster’s Greenwood Cemetery.  An unusual monument marks his grave.

John Horting’s “surprise” undoubtedly would be astonishing to the whiskey man himself if he returned.  He had sold Ash Tonic for a dollar or so. The bottle and label were there just to convey the contents.  Soon everyone would know that his cure-all was complete nonsense and, in fact, illegally labeled.  Nevertheless, his bitters bottle had fetched more than $5,000 at a 2020 auction. In 1890 that was almost four times the average annual family income.  Might Horting conclude that the 21st Century was proving just as gullible as the 19th?

Notes:  This post was drawn from a variety of sources.  After seeing other Hortling bottles on the Internet, I read Ferd Meyer’s Peach Ridge post where he discussed the astonishing sale of the Ash Tonic Bitters and exclaimed “Hoochie Mama.”  That led me to Lowell Wenger director of the Lititz Historical Foundation (LHF) who in turn referred me to Cory Van Brookhoven, president of LHF and an authority on Lancaster area distilling.  Both were helpful in documenting Horting’s Rome Distillery period, including providing a photo of the facility before it was torn down.  Unfortunately, no photo of Hortling himself has come to light.
*****
Subsequently both Cory and Lowell have noted corrections that needed to be made in the text. Again thanks to them.

Posted by Jack Sullivan at 6:50 AM