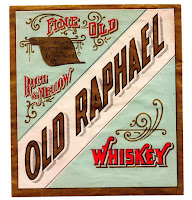 Born into a Jewish immigrant family of modest means, given only an elementary education and forced to go to work as a teen, Rudolph Raphael quickly distinguished himself in Pittsburgh as a farsighted, creative leader in the liquor trade.  At an age when Raphael could enjoy his prosperity, a mansion home and the comfort of his family, fate took a cruel twist.

Raphael was born in New York City in 1854, the son of Jeanett Victorious and Lippman Raphael, his father a merchant tailor and immigrant from Germany.  The boy’s education was basic but he proved to be a bright lad.  The 1870 census of the Raphael family recorded him clerking in a store by the age of 16 in Meadeville, Pennsylvania. By 1884 Raphael had moved to Pittsburgh, listed in local directories that year as a bookkeeper with the M. H. Danziger Company, a liquor house.

Raphael was a quick study in the whiskey trade and by 1886 had struck out on his own with a wholesale liquor dealership at 204-206 Wood Avenue in Pittsburgh.  Throughout most of his business career, Raphael had a partner.  His first was a Pittsburgh local named Dreifus, as shown on the letterhead above.  According to business directories, Dreifus was gone after about a year and Raphael was running the company under his own name.

Raphael’s next partner was his brother-in-law, Louis Zeugschmidt, the husband of his sister Miriam.  According to directories Zeugschmidt joined forces with Raphael about 1892 when the liquor house moved  to 320 Fifth Avenue, later renumbered to 1028 Fifth.  There the company blossomed, becoming well-recognized for its proprietary brands of whiskey, “rectified” (blended) on their premises from whiskey stocks shipped from Pennsylvania distilleries.  After preparing the desired blend to insure color, smoothness and flavor, the partners bottled it, slapped on labels and sold at wholesale.

The company used the brand names “Melrose,” "Mount Union,” "P. P. R.,” "Popular "Popular Price Rye,” “Old Raphael” and “Tioga."  After Congress tightened the trademark laws, Mount Union. PPR and Tioga Rye were registered with the government. Tioga was Raphael & Zeugschmidt flagship brand, advertised widely throughout the Pittsburgh Metro area and beyond.  The name appears to have  been taken from Tioga County located near the north central border of Pennsylvania.

Among the company’s advertising efforts was a trade card that collectors call a “mechanical,”  in that it requires the viewer to open it. Often these cards had risque' themes and Raphael did not disappoint.  Shown here is a card that before opening depicts a demure lass, loosening her hair,  When opened it has the woman displaying her bloomers to an elderly gent who has been drinking Tioga Rye and is now toasting her lingerie. 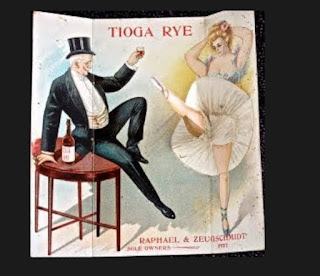 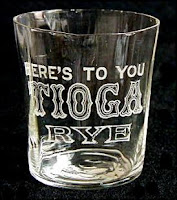 Tioga Rye was also advertised on items Raphael & Zeugschmidt gave away to saloons, restaurants and hotels featuring their products.  Among them were shot glasses  that prominently emphasized their name while offering up toasts like “Here’s to you” and “Something Doin’.”  Perhaps the most unusual and expensive giveaway from the wholesale house was a  two-handled “loving cup” beer stein with the picture of William McKinley on one side and William JennIngs Bryan on the other.  Since the two men ran against each other for president twice, McKinley winning both times, the ceramic dates from either 1896 or 1900. 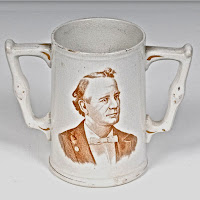 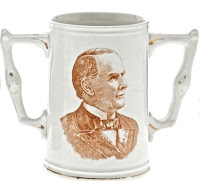 Meanwhile Raphael was having a personal life.  At age 45 apparently tiring of being bachelor, in 1899 he married.  His bride was Anne E. Isaacs Woolner, 36, who may have been a widow.  “Annie,” as she was known, was originally from Philadelphia. They would have two children, Ralph Isaac, born in 1900, and Irma Gladys, 1902.

This was a period of continued growth for Raphael’s liquor interests.  A continuing problem for wholesalers, particularly in an era of “Whiskey Trusts” was securing a constant supply of product for blending into their proprietary brands.  Either by contract or investment Raphael found a steady supply by buying into a distillery founded in 1870 in Buffalo Township not far from Freeport, Pennsylvania.  Called The Montrose Distillery (RD#8, 23rd District), it was owned by A. Guckenheimer Bros. of Pittsburgh [See my post on Guckenheimer, April 15, 2012.]

Shown above in a survey drawing, the Montrose employed 12 men in the production of whiskey. The still was made of wood with a capacity of 125 gallons, heated by steam. It supplied two bonded warehouses that had been built in 1876, and 1881, with a combined capacity of around 20,000 barrels.

This acquisition likely led to Raphael expanding into a second liquor business with a new partner, Jacob Adolph, a firm called Raphael-Adolph Company, located at 927 Liberty Avenue (1901-1905) and subsequently at 436 Seventh Avenue (1906-1910).  This company billed itself as “Distillers and Jobbers of Fine Whiskey,” indicating steps beyond the rectifying practices of a wholesale liquor house.  This enterprise had its own set of proprietary brands, including “Blosburg,” "Blosburg Club","Sam Ewart", "Sam Henderson.” and "Pittsburgh Press Club.”  As shown below, this last whiskey may have been the flagship. 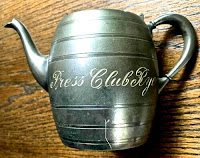 With National Prohibition still a long way off, Pennsylvania a reliably “wet” state known for distilling, and Pittsburgh a national center of the liquor trade, Rudolph

with his prospering businesses was at a point where he could relax and enjoy the family life he had put off for so long. He moved Annie, Ralph and Irma into a three story mansion home at 332 Stratford Avenue in the Friendship District, a prosperous neighborhood of large Victorian houses in the East End of Pittsburgh.

Ensuing years. however, would bring repeated tragedies to the Raphael family.  In February 1909 Annie died after a two week siege of pneumonia, only 46 years old. During her decade in Pittsburgh she had earned a a reputation for her philanthropic work on behalf of Jewish and other charitable causes.  After a funeral at the family home, she was buried in Philadelphia at Mount Sinai Cemetery.  She and Rudolph had been married only ten years.

Annie’s death left her widower husband with two small children to raise — Ralph was nine; Irma only seven.  As Raphael struggled with his own loss and obligations to his youngsters, his mother Jeanette, living with his sister in Pittsburgh, died the following year.  Whether it was the blows of these losses or some other cause, Raphael’s health faltered and in July 1911, he died at the age of 57, leaving his two minor children orphaned.  After a family funeral Raphael was interred next to Annie in Mount Sinai Cemetery.

The liquor business Raphael had worked a lifetime to build partially survived.  Whether sold by Raphael himself or his survivors, the Raphael-Adolph Company changed ownership. Continued to be managed by family members, Raphael & Zeugschmidt remained in business until 1918 and the approach of National Prohibition.