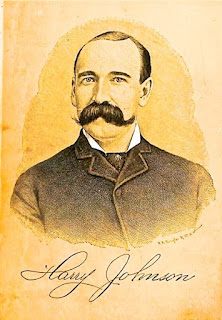 From an ignominious beginning in San Francisco, Harry Johnson became one of the best known bartenders in America, operating drinking establishments across America while dispensing wisdom on bar-keeping success and supplying dozens of drink recipes.  Johnson published one of America’s first bartender’s manuals, gaining recognition as “The Father of American Bartending.”  A unique aspect of Johnson’s manuals was the drawings of cocktails and other libations, some reproduced here.

Born in Germany about 1845, young Johnson as a youth  is said to have sought adventure in 1861 by signing on as a seaman on a ship bound “Around the Horn” for California.  On the outward voyage he was badly injured in a shipboard accident, breaking an arm and hip.  Left behind by the captain to heal in San Francisco, Johnson found a job in the kitchen of the Union Hotel peeling vegetables.  Ever ambitious he eventually worked his way up to hotel bartender and then to manager.  “The drinks I invented and the way I mixed them attracted many patrons to the bar….”  At least that is the story Johnson, something of a fabulist, told.  A more mundane alternative version has him sailing from Hamburg with his parents and a sister in 1852, eventually fetching up in San Francisco and working at the Union Hotel.

Restless and wanting to see more of America in 1868 Johnson cashed out of San Francisco and headed east for Chicago.  There he opened his own saloon, one he later claimed was “generally recognized as the finest establishment of the kind in this country.”  Modesty was not a strong trait in Harry.  Something of a celebrity in Chicago, Johnson gave lectures and wrote articles and published drink recipes in local newspapers.

As his reputation grew Johnson was invited to participate in a national bartending competition in New Orleans.  The judges asked him to make a dozen whiskey cocktails all at one time.  The German immigrant is said to have placed 12 glasses in two rows of six each and then built a pyramid, apparently similar to one shown as pictured with him here.  “He mixed up the cocktails and strained them using a pair of large glasses without spilling a drop.” * That agility won him first prize, $1,000 in gold coins and a silver tumbler and spoon. Johnson subsequently crowned himself “Champion Bartender of the United States.”

When Mrs. O’Leary’s cow reputedly ignited the Great Chicago Fire of 1871, Johnson’s popular saloon was reduced to ashes.  With a loss he estimated at $100,000 (equiv. $2 million today) and admittedly “financially ruined,” Johnson was forced to start over.  In the meantime he had found love in the Windy City in the person of Bertha and they married.  Ever on the move, he and Bertha abandoned Chicago for Philadelphia in time for the U.S. Centennial celebration.

There Johnson became head bartender at the Grand Hotel.  Within two years he had moved on to run the bar and wine cellar at Delmonico’s, among Philly’s fanciest eateries.  “There he regaled former U.S. President and whiskey-lover Ulysses S. Grant with original creations….” *

Johnson reputedly then briefly moved to Boston where he found work in an unnamed hotel as a bartender.  Apparently finding Bean Town too small for his ambitions, Johnson moved on to the (his term) “Metropolis” of New York City.  With his savings he was able to buy an existing saloon in the Bowery called “Little Jumbo.”  Represented by Johnson as “pre-eminently successful,” Little Jumbo drew both financiers from both Wall Street and politicians from Tammany Hall.  As the Bowery declined, however, Johnson sold out and opened another bar in the basement of a building in Hanover Square.

Throughout this period Johnson also was writing. His New and Improved Bartender's Manual, or How to Mix Drinks in the Present Style was published in 1882. The manual provided hundreds of cocktail recipes. What made it unusual were its detailed instructions on how to become a proper bartender.  Containing both English and German versions in one volume, Johnson had advice on such topics as : "The opening of a new place", "How ale and porter should be drawn", "Hints about training a boy to the business", "Handing bar-spoons to customers” and "To keep ants and other insects out of mixing bottles.”  He included an illustration of the tidy bar. 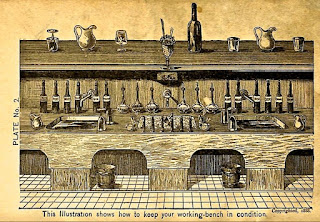 The first edition was rife with misprints, omitting 25 recipes listed in the index.  A major typographical howler was Johnson’s “Instructions relative to Bowels containing Punches.”  Nonetheless, he bragged that 10,000 copies had been sold.  This may have included the second edition published in 1888, one that corrected earlier mistakes but retained the German-language section.  Major changes marked the 1900 edition.  Gone was the German and in its place a highly desirable alphabetical index.  Moreover, the number of pages had swelled from 197 to 268.  Lots more advice. Lots more drink recipes.

The one constant through all editions were the line drawings of a variety of drink concoctions.  Among them was “Morning Glory Fizz,” shown below left, that included as ingredients a raw egg, absinthe, Scotch whisky and Vichy water.  Johnson recommended his Fizz for breakfast claiming that it “will give a good appetite and quiet the nerves.”  Similarly complicated was his “Whiskey Daisy,”  containing “good whiskey,” yellow chartreuse, and fruits in season.  “This drink…will taste good to anybody,” Johnson assured. 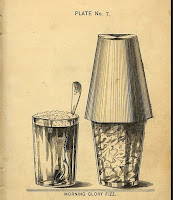 Johnson has been credited for the first recipe for a martini. In earlier editions he had called it a “Martine” and include a drawing of it both “on the rocks” and “up.”  The recipe for this drink differs significantly from modern ideas of a martini but by the 1904 edition the spelling had been changed to “Martini” and the mix, below left, was closer to the James Bond version.  Johnson also recognized the allure of the mint julep and included a picture and a standard recipe. 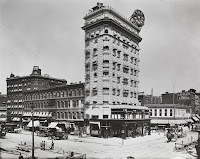 In the late 50’s the strain of Johnson’s frenetic lifestyle caught up with him.  Leaving New York behind, in 1896-1897 he and Bertha went abroad to Europe for a months-long therapeutic change of pace.  “He thought he would never own another bar again.”  Upon the couple’s return, however, Harry could not resist one last grand gesture.  In 1903 he opened an establishment he called the Pabst Grand Circle on Columbus Circle in New York. “With its unimpeded view of Central Park, Harry’s hotel sported a café, dining room, roof garden restaurant, and an art gallery that housed his personal artwork collection valued at $4 million in today’s currency.”* It is shown right.

Assisted by a nephew as manager, Johnson actively engaged with patrons at the Pabst Grand Circle.  He also was continuing to update and revise his drink manuals. The 1904 edition shown below added a new section on wine selection and an artistic endpaper.  With the coming of National Prohibition, Johnson retired, spending his time traveling in Europe, sight-seeing and buying art, but always returning to New York, the one city that could satisfy his restless spirit.  He died there in 1933, about the age of 88, just months before the repeal of National Prohibition.  “No fanfare, no great tributes.  Yet Harry’s legacy of great whiskey drinks continues to this day.”* 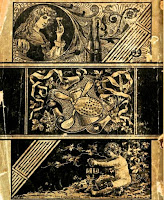 Notes:  Considerable information exists online about Bartender Harry Johnson.  The most complete biographical material appears on a blog called “Homepage,”  author undisclosed.  It is from that source that all the “starred” quotes are drawn.  Four editions of Johnson’s drink manuals in their entirety with illustrations are available at a site called EUVS Digital Collection.

Posted by Jack Sullivan at 6:45 AM