Charles Reilley — A Rogue in the “City of Saints” 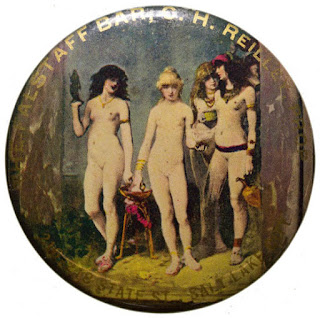 In my estimation of all the risqué items that pre-Prohibition men issued to wholesale and retail customers, the most blatant use of nudity to sell whiskey was from a saloonkeeper in perhaps the most unlikely city in America:  the so-called “City of Saints,” — Salt Lake City, Utah.  Shown here is a pocket mirror issued in the Mormon city that displays four nubile females in full frontal nudity without a shred of clothing or any pretense at modesty. 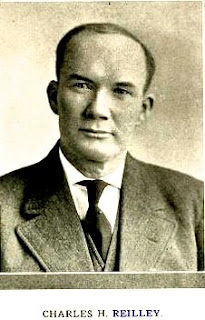 The individual responsible for this artifact was Charles H. Reilley, shown here, who was born in Providence, Rhode Island, in 1862.  He was one of six children of Bridget (McGahagan) and John Reilly, both immigrants from Ireland.  His father was a boiler maker.  At the age of 21 in 1883 Charles moved to Salt Lake City.  There he met and in 1890 married Lillian Indge, a local woman raised by a single parent, a hair stylist.  Charles and Lillian would go on to have seven children over the next eleven years.

Although Reilley’s early career in Salt Lake City has gone unrecorded, I surmise that he may have begun as a bartender in one of the many saloons that the city boasted.  Although the Mormon Church officially frowned on drinking, its leaders were hesitant to ban alcohol, preferring to control and tax supplies.  They were said to be wary of stirring revolt among Utah’s “Gentiles,” i.e. non-Mormons.  With his growing family, Reilley made the decision to strike out on his own. In 1892 he opened a retail liquor store at State and First South Street.  He called it the Elk Liquor Store.  The establishment likely held a saloon. 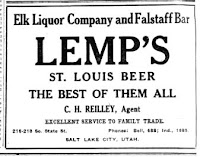 Reilley appears from the outset to have been a successful businessman, soon outgrowing his initial quarters and moving to a much larger location at 216-218 South State Street.  By this time he had expanded into selling liquor at wholesale as well as retail.  Moreover, he had become the Salt Lake agency for distributing the products of the Lemp Beer Company, a popular suds-maker from St. Louis.  Its flagship brand was Falstaff Beer.  By holding the franchise Reilley was profiting from every bottle of Falstaff and other Lemp brands sold in Salt Lake City bars, cafes, groceries, and drug stores.  Reilley advertised the beer vigorously, including calling the saloon co-located with his liquor store, “The Falstaff Bar.”

As shown on this paper cup, along with Lemp products, Reilly featured “Brook Hill Sour Mash Whiskey.”  This was the flagship brand of Friedman, Keiler & Co. of Paducah,Kentucky.  [See my post on Friedman, June 5, 2014.]  Shown here is a flask with the typical black label for the brand.  At right is another Brook Hill bottle, one of the most unusual spirits containers to be found.  Measuring about 9.5 inches high, the neck protrudes from a metal outer body, two sides of which have hand-etched designs.  One side says “Brook Hill” and the other is a detailed drawing of a baseball player.  A fervent sports enthusiast, Reilly could relate to this bottle. 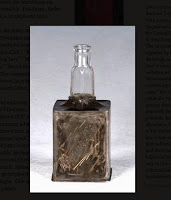 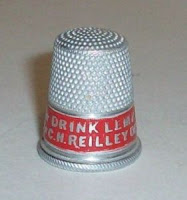 Reilly also became well-known for his advertising giveaway items.  Shown here are a blue and red thimble that bear his name and “Drink Lemp Beer.”  It was perhaps a token for a male customer to take home to “the little woman” if she smelled beer on his breath.  Another gift was a 1917 datebook, that also featured several pages of Lemp advertising.  Reilley also provided customers with a multipurpose tool containing a corkscrew and bottle opener. These likely were presented to bartenders who were featuring Reilley's products. 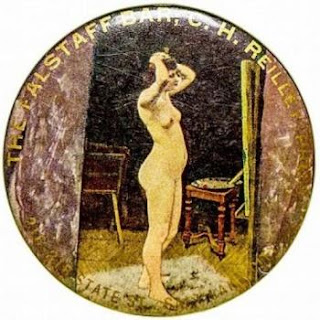 Most of all, perhaps, Reilley became known in Salt Lake City for his pocket mirrors.  In addition to the item that opened this post, he issued another that shows a nude woman from the side as she primps in front of a mirror.  Both images were made possible by the invention of celluloid that was light, reasonably durable, and could hold complicated images and multiple colors.  The mirror that opens this post recently sold for $500; the second for $100.  Remember that Reilly gave them away.

Reilley’s growing wealth allowed him to establish a sizable bottling works at Third West and Eighth South Streets.  Costing the equivalent of $880,000 today, this facility employed 27 workers.  He also was making a name in Salt Lake for his activities in fraternal organizations like Elks, Eagles, and the Salt Lake Commercial Club.  A 1914 biography noted Reilley’s “wide acquaintanceship” and his efforts in Salt Lake City “to build up the community.”

Even as Reilley was prospering and gaining local recognition, prohibitionary forces in Utah were closing in on the liquor trade.  The local press in January, 1917, headlined a story that state agents had raided the Elk Liquor Store and confiscated 250 cases of whiskey on the grounds that all the bottles were short two ounces of the amount claimed on the label. The same year the Jewish governor of Utah pushed through a law that banned all products containing alcohol except for patent medicines, flavoring extracts, pure grain alcohol for scientific and industrial purposes, and sacramental wines. 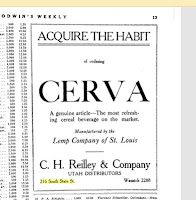 Forced to shut down his saloon and liquor store, Reilley attempted to recoup by featuring a Lemp-produced non-alcoholic drink called “Cerva,”  He called on his customer to “acquire the habit,” calling Cerva “the most refreshing cereal beverage on the market.”  Apparently the drink did not catch on.  Reilley shut down the Lemp distributorship and, with a partner entered the automotive world.  Their dealership sold the Nelson, an automobile built in Detroit, Michigan, by the E. A.  Nelson Motor Car Company. The models, shown below, never caught the public’s fancy and was out of business by 1922. 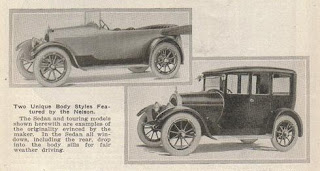 Reilley was not around to see the demise of car company nor the imposition of National Prohibition in 1920.  In October 1918 while on a trip to Ocean Park, California, he died at the age of 57.  His body was returned by train to Salt Lake City where he was buried at Mount Calvary Catholic Cemetery.   He lies beneath the Reilley monument where his widow, Lillian, joined him 24 years later.

Note:  Among the multiple sources for this post, biographical information was obtained from ancestry.com and “Utah Since Statehood:  Historical and Biographical,” Volume III, Clark Publishing (1919).

Posted by Jack Sullivan at 8:33 AM