Guido of Toledo: A Refugee to Riches Story

The “rags to riches” story is common in American folklore. But a man with the improbable name of Guido Marx followed a “refugee to riches” road as a whiskey and wine merchant that led him eventually to becoming the mayor of Toledo, Ohio, and an American ambassador. 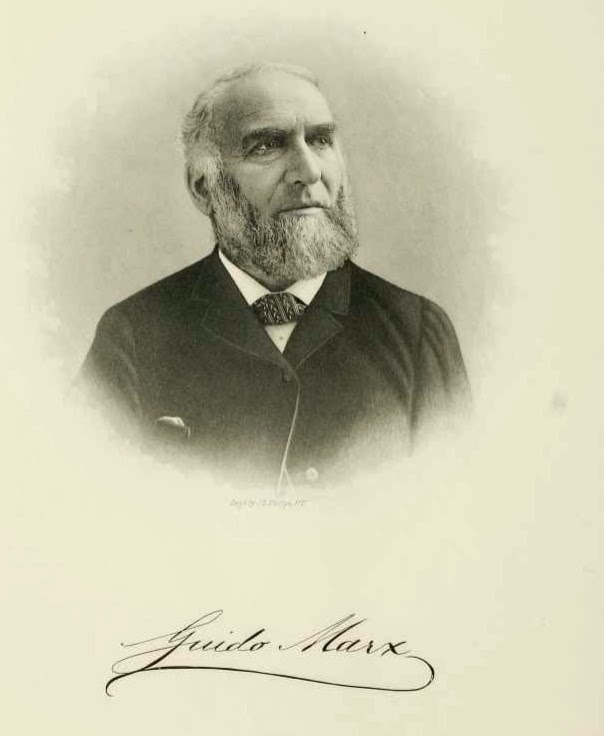 Guido’s story begins in 1827 when he was born in Carlsrule, Germany. Educated there, he worked in his father’s store, learned the export-import business, and studied art in Paris. More important, when he was 21 he and a brother, Emil, became revolutionaries, fighting for German political rights against Prussian authoritarianism. The Revolution of 1848 was crushed.  As participants were being arrested and executed, the brothers fled to the United States. They were part of a German refugee group known in history as the “Forty-Eighters.”

After settling first in Wood County, Ohio, the Marx brothers in 1851 moved to Toledo where they opened a grocery store. As the store prospered, Guido became restless for new challenges. He convinced a third brother, Joseph, to leave Germany in 1853 and help him begin the first German language newspaper in Toledo, called the Ohio Staats-Zeitung. At first a weekly, by 1857 the newspaper went daily and changed its name to the Toledo Express.

In the meantime Guido in 1853 had married Elizabeth Brehm, six years his junior. She had been born in Hessia, Germany, and brought to Toledo as a baby. The couple would have 13 children, of whom 11 lived to maturity. A Republican and strong supporter of Abraham Lincoln, Guido was becoming known outside Germanic circles for his newspaper articles and business acumen. 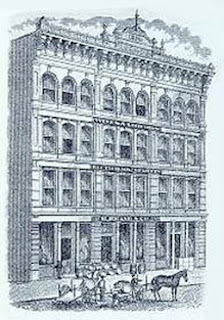 Still restless, in 1860 Guido sold his grocery interests and bought a partnership in a whiskey “rectifying” and wholesale liquor business -- the oldest and largest in Toledo. Named the R. Brand & Company and located at 30 Monroe St, it had been founded in 1850 by another German immigrant, Rudolph Brand. After Brand’s death five years later, in partnership with Rudolph’s nephew, Guido took over the firm. He wasted little time in expanding the business, traveling to Germany, Spain, France and Hungary to begin the import of European wines. He also
promoted Lake Erie wines. In a short time R. Brand & Co. became the largest wine wholesaler west of the Atlantic Coast, eclipsing even Chicago and Cincinnati. 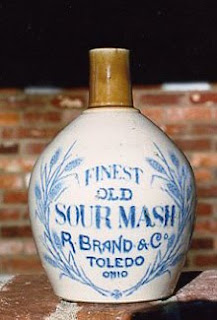 By now wealthy and well-known, the former revolutionary began his American political career in 1869 when he was elected to the Toledo City Council. He subsequently was elected to the Ohio Legislature in 1871 and reelected in 1873. That same year the Governor of Ohio appointed him as the representative of Ohio at the Vienna Austria Exposition of 1873. This was just the first of such appointments. Guido later would be named to the Board of Judges (for alcoholic beverages) at both the Philadelphia International Exposition of 1876 and the Chicago Colombian Exposition of 1893.

In 1875, Guido Marx was elected Mayor of Toledo, serving as the city’s first chief executive of Jewish heritage. It was a time of great mercantile and industrial expansion in that Lake Erie Port. Guido epitomized the go-go spirit by purchasing land at 120-124 St. Clair Street and erecting a spectacular (for the time) four story Italianate style commercial building to house R. Brand & Co. Shown here, it held the whiskey rectifying operation, the Nation’s first U.S. bonded warehouse, and sales offices for wines and liquors. 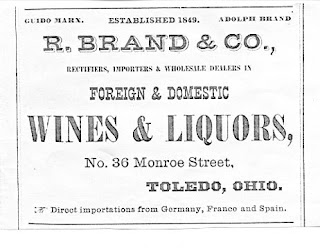 Of the approximately 4,600 barrels of spirits produced in Toledo in the 1870s, fully one-fourth came from Brand & Co. Its whiskey brands, including Rehmann Rye, Dew Drop Rye, R. Brand Rye, were sold throughout the Midwest and were accounted the first to exploit markets in the Lake Superior region. Adopting an elaborate new letterhead. the firm also began to issue its
products in fancy ceramics. The example shown here bears the mark of the Port Dundas Pottery in Scotland and was issued in both blue and green. The firm also featured a line of giveaway shot and wine glasses advertising its products. 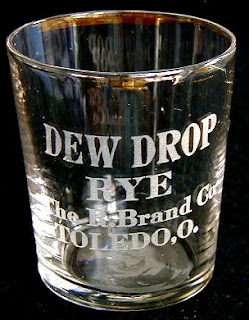 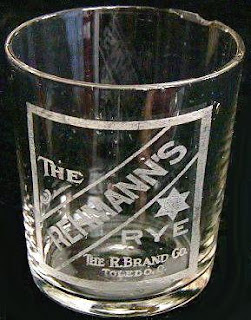 But Guido’s career in public service -- and armed conflict -- had one more chapter. In 1877, President Rutherford B. Hayes appointed him as ambassador to Chile. That landed him squarely in the middle of the so-called “War of the Pacific” which pitted Chile against the combined forces of Peru and Bolivia in land and naval battles, as shown here. In the wake of Chilean victories -- the U.S. had stayed neutral -- he returned to Toledo and resumed running R. Brand & Co.

Guido continued to be appointed to local posts: Ironically for a former revolutionary he served for six years on Toledo’s Police Board. In 1884 he became a member of the Board of Trustees of the University of Toledo. Afflicted by a kidney disease, he died in 1899 at the age of 72 and is buried in Toledo’s Woodland Cemetery. R. Brand, the company he inherited and guided for almost 30 years, was sold to employees and went out of business about 1916 when Ohio voted “Dry.” 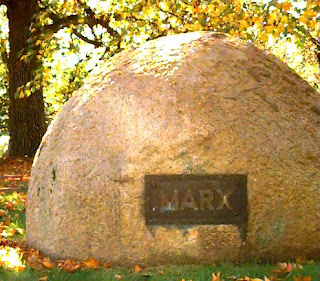 Guido Marx, the former German revolutionary who found fortune and fame in Ohio, continues to be remembered in Toledo. The building he had erected on St. Claire Street is on the National Historical Register. Moreover, a fictionalized play of his life was presented in 2009 by a local theater company. The play was entitled: “Guido of Toledo.”  Guido's grave in Toledo's Woodland Cemetery is simple rock with his name attached.

Posted by Jack Sullivan at 4:31 PM