Over the Jumps with the Lanahans of Baltimore 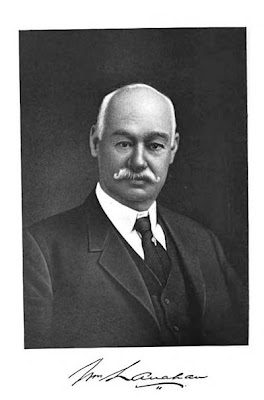 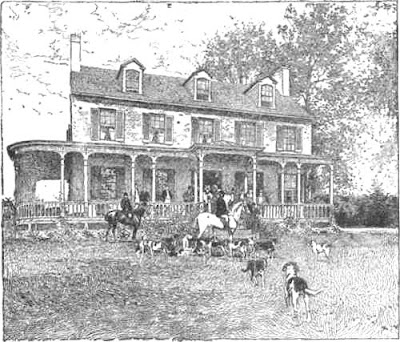 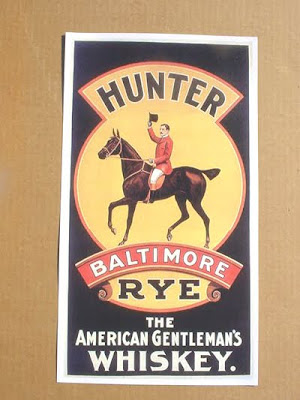 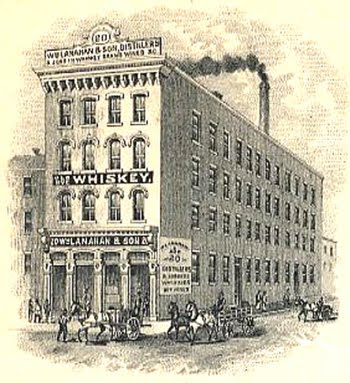 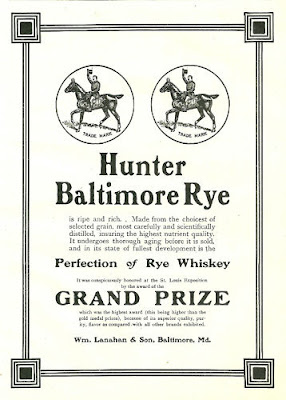 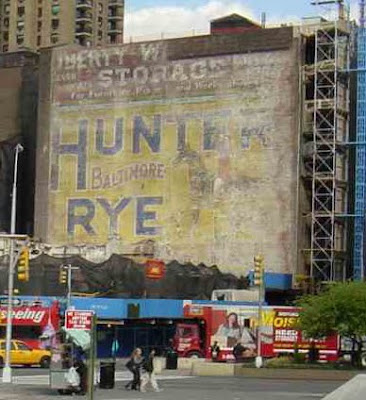 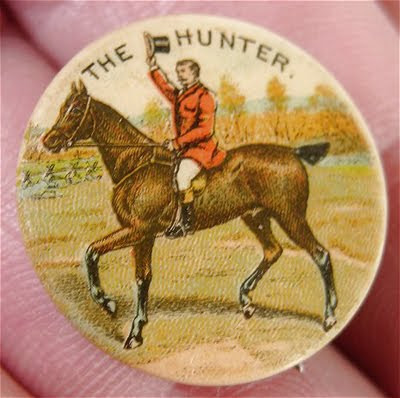 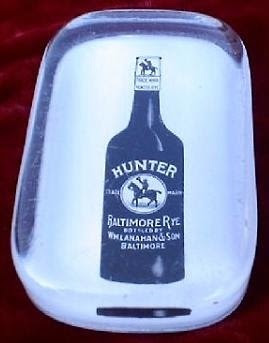 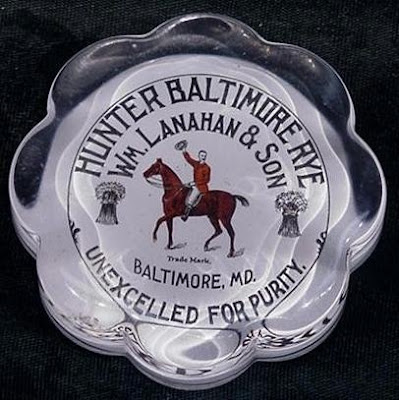 William Lanahan Jr., shown here, was the master of hounds for a Maryland fox-hunting coterie -- a highly prestigious post for the scion of a whiskey making family. Not that the founding father, William Sr., was shanty Irish when he founded the business. While there is scant information about his life, the elder Lanahan is said to have achieved considerable wealth and influence as a confectioner before the Civil War. During the early 1850’s he began producing and selling a whiskey he first federally registered in 1855 as Hunter Pure Rye and, afterward as Hunter Baltimore Rye. The brand would make the Maryland city almost synonymous with quality rye whiskey.

From the beginning, the Lanahans’ whiskey exhibited aristocratic pretensions: The label and ads featured a man formally dressed in fox-hunting garb astride a horse, both set to gallop with the hounds Subsequent branding featured a horseman with top hat and the slogan: “The American Gentleman’s Whiskey.” This “timber-topper” image clearly was attempting to appeal to the upper classes or people aspiring thereto. After his father’s death in 1868, William Jr. took over the business and vigorously expanded whiskey-making operations.

In 1870, according to the earliest city directories, Wm. Lanahan & Son was doing business at 20 N. Light Street. The company was located there in 1904 when the Great Baltimore Fire destroyed its building. It relocated at 205-207 Camden Street shortly thereafter, but obtained permission to rebuild at its old location after the widening of Light Street. In 1906 the firm resumed business in a newly constructed building at 20 Light. Its three story facility, known as the Lanahan Building, loudly announced its purpose with the word “whiskey” in prominent letters on its face. It also proclaimed Wm. Lanahan & Son as “distillers.” Jim Bready, the noted expert on Baltimore whiskey, insists that the Lanahans actually were “rectifiers,” who took alcohol distilled by others, mixed it with other ingredients, bottled, labeled and marketed it.

Although the firm sold other whiskeys, among them “365,” Bodega, and Hunter Bourbon, Hunter Baltimore Rye was its flagship brand. When Lanahan Junior took over management of the firm, he embarked on a major advertising campaign in newspapers and magazines. He also directed painting the Hunter Baltimore Rye logo and a mounted fox hunter on a wide range of locations. Its signs graced outfield fences in major league baseball parks in New York and Chicago as well as in Baltimore. Several years ago when a building was torn down at Broadway and 64th St. in Manhattan, as shown here, uncovered was a colorful ad for Lanahan’s whiskey on a wall eight stories tall.

Unusual for the time, Lanahan employed a sales force of six men who traveled the country marketing the whiskey and signing up local distributors. As was common with brands seeking national attention, Lanahan issued a wide range of advertising items. Among them were a celluloid pin depicting a fox hunter, shown here. The company issued at least several varieties of paperweights. Most carried the waving horseman.

Never shy about extolling the virtues of his whiskey, Lanahan advertised Hunter Baltimore Rye as “The Perfection of Aroma and Taste...the Leading Whiskey of America.” Perhaps recognizing that its appeal as a “gentleman’s” drink might have a negative effect on potential female customers, the whiskey also was touted as "particularly recommended to women because of its age and excellence.” All this hype worked. Hunter became the largest selling rye whiskey in America. A 1912 book entitled Baltimore: Its History and Its People extolled the firm thus: “There is no article made in Baltimore that has done more to spread the fame of the city as a commercial centre than has Hunter Baltimore Rye.”

Having conquered America, Lanahan looked abroad to expand his market. In London in the program of a performance of “Sherlock Holmes” Hunter Rye was advertised as “The Popular American Whisky.” (Brit spelling). It was the lone Yankee booze sold at the Duke of York Theater that season.

In 1902 the firm tried to get a concession from the imperial court of China. Letters to that effect exist from Wm. Lanahan & Son to Gen. Thaddeus S. Sharretts in Shanghai. Sharretts had been appointed by President Theodore Roosevelt in 1901 to negotiate with the Government of China on increasing imports of U.S. goods. Lanahan’s plea may have paid off. A Hunter sign in Chinese recently sold at auction. Another Asian port in which the whiskey found a place was in Manila, the Philippines. A photo exists of American soldiers of the 8th U.S. Infantry, in the islands to put down an insurrection, swigging down quarts of Hunter Baltimore Rye during their off-duty hours.

With success came competition. Many other whiskeys began to call themselves Baltimore rye -- even products made hundreds of miles from the Maryland city. In reaction to these presumed copycats, Lanahan registered “Hunter Rye” with the government as a trademark in 1890 and again in 1905; and “Hunter Baltimore Rye” in 1898 and in 1908.

Wm. Lanahan & Son and its brand operated for 59 years, a extraordinary corporate life in the turbulent history of Baltimore whiskey-making. By the time the doors to the operation finally closed in 1919 with the coming of Prohibition, Lanahan family members had moved into the world of banking and high finance. One Lanahan became a governor of the New York Stock Exchange. Another achieved a measure of fame by marrying Scottie Fitzgerald, the only child of author F. Scott and Zelda Fitzgerald. Those Lanahans moved to Washington, D.C., where they were a glamour couple during the 1950s and 1960s.

The Hunter Rye brand survived Prohibition. The name eventually was bought by Seagrams, one of the big whiskey cartels out of Canada. About the same time Seagrams purchased the Wilson Distillery in Baltimore. It merged the two operations and began making Hunter Rye at its Calvert distillery in Baltimore. When that facility subsequently was shut down, the Hunter-Wilson Distilling Company was relocated to Seagram’s Louisville plant. Apparently because “rye” was losing popularity, Hunter became a Kentucky bourbon. It did not give up its “Tally Ho!” image, however. Its advertising featured a man on horseback clearing a jump with the slogan: “The first one over the bar.”
Posted by Jack Sullivan at 7:43 AM