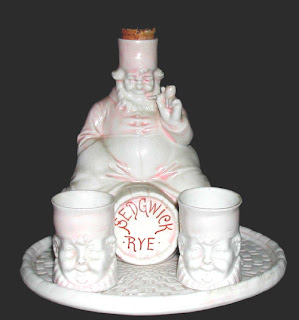 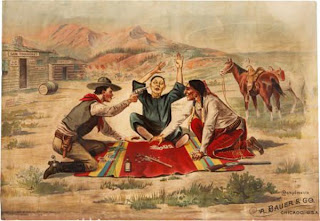 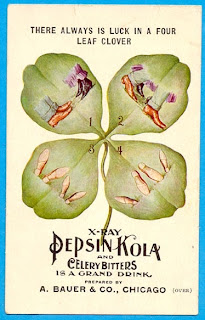 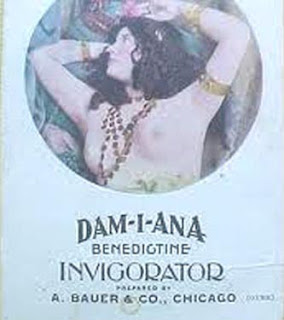 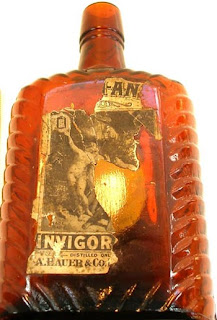 The details of Alexander Bauer’s personal life are sketchy at best, but the liquor business he built in Chicago during the late 1880s was marked by three characteristics: spirits, sex and scams. They give us a clue as to who Bauer was and what he was up to.

Spirits: The liquor company that Bauer founded in Chicago began, according to company literature in 1886 although it first shows up in city directories in 1893. A letterhead shows the steady progression over time for the expansion of the firm to a five story headquarters at 142-148 Huron Street. A paper sign issued by Bauer provides a colorful look at the purported activities at each level of the building.

For its whiskeys the company used the brand names: "Dan Patch", "Old Rampart", "Sedgwick", "Sir John Canada Malt", and "Torrance AAA.” It packaged its liquor in bottles and, reaching out to Shafer & Vader Pottery in Germany, in attractive decanters with matching cups. It also advertised its cordials and liqueurs, including “Anchor Brand Peppermint Schnapps” and “Pineapple Rock and Rye.”

Bauer issued a number of colorful items to saloons carrying his booze. A sign, shown here, was of a cowboy and an Indian threatening a Chinese gentleman who apparently had drawn four aces in a poker game. In the background is Sam Toughnut’s Saloon, where three Bauer beverages are advertised.

Sex: While the wide variety of alcoholic potables featured by Bauer led to its growth, the company also understood that “sex sells.” Shown here is a trade card for its “XRay Pepsin Cola and Celery Bitters.” Parsing the image on each lobe of Bauer’s four leaf clover advances a story. It is told in the shoes of a man in cuffed pants and woman in high-button shoes who meet in lobe #1, go off together in lobe #2, are lying separately, apparently in bed, in lobe #3, and -- mercy! -- what is happening in lobe #4? Such a risque approach to merchandising alcoholic beverages was hardly unusual in the whiskey trade but Bauer took it to new racy levels .

Further evidence is an ad for a mostly alcoholic drink called Dam-I-Ana, featuring woman shown nude from the waist up in a “come hither” pose. It is named after an plant that was supposed to have Viagra-like effects in men. The full ad says, “If you appreciate me...” leaving the thought unfinished but implying the obvious. The next line says “Can’t.” Oh my, then surely Dam-I-Ana Invigorator is your drink! The bottle, shown here with a torn label, helpfully depicted a fully nude woman and a goat-headed satyr. Bauer did not believe in leaving much to the imagination.

Scams: Yet even Bauer’s emphasis on the prurient pales against the outrageousness of his scams. As reported in an 1897 edition of the American Druggist and Pharmaceutical Record, Chicago law enforcement authorities conducted a raid on Bauer’s building at 142-148 Huron. The Chief Constable Eckart read his warrants to Bauer who was on the premises. Other officers stood guard in various departments.

What they found was startling. The first seizure was a case of Hennessy brandy. Bauer admitted that it was not genuine but said he was not responsible for having it in his possession. In quick order the constables seized 16 cases of counterfeit Kummel and 4 cases of Benedictine. Then 240 embossed bottles of Angostura bitters were discovered along with phony wrappers. Another large lot o counterfeit labels was found in the basement. They were for James E. Pepper Whiskey, Gilka Kummel, and Boonekamp Bitters. It is clear that Bauer was taking old bottles, some of them the genuine article with names blown in the glass, refilling them, slapping on a faux label and selling them as the real mccoy.

Whatever fine Bauer may have been assessed, it did not deter him and his cronies. Within a year following the raid, the company veered on another illegal course. His firm’s vice president, Tucker Hardy, set up a new and ostensibly separate company. The address, however, was the same as A. Bauer Company. Rather than refilling real bottles and counterfeiting labels, the Hardy Company was in the business of trademark rip-offs. Soon the building on Chicago’s Huron Street was churning out close look-alike labels of Benedictine and Chartreuse French liqueurs and, once again, Angostura Bitters. The only element distinguishing them from the real products was a small label indicating the Tucker Hardy Company.

Predictably the manufacturers owning those trademarks soon struck back. In 1902 they hauled Alexander Bauer into the U.S. Circuit Court of the Northern District of Illinois. The judge in those cases, again predictably, found for the plaintiffs. Deciding to fight the verdict, Bauer took the case to the U.S. Court of Appeals. There the judges were not fooled that the Tucker Hardy Company was a separate entity, terming it a “department” of the Bauer firm. The Appeals Court upheld the earlier ruling and the fines levied on Bauer.

Shortly after these verdicts, Bauer reorganized his company, incorporating with assets of $100,000. Shortly after, the Tucker Hardy Company, nothing more than a facade anyway, disappeared from business directories. The company moved one last time to an even bigger building at 227-223 Huron and changed its name to the A. Bauer Distilling and Importing Company. Despite its shady past, Bauer had the hutzpah to claim on its letterhead: “For 20 years a square deal: the cause of our phenomenal growth.”

Apparently determining that crime does pay until one gets caught, Bauer continued to counterfeit his products. This time he would run athwart the Food and Drug Act of 1906. That legislation required accurate labeling of food, drugs and beverages. In 1912 the Federal government hauled Bauer into court once again for shipping a consignment of bottles labeled “Sparkling Sauterne” from Illinois into Wisconsin. In a typical Bauer show of bravado, a sticker read: “Guaranteed by A. Bauer Dist. and Imp. Co., Chicago, Ill, under the F & D Act, June 30, 1906, Serial Number 5015.”

After being examined by Federal authorities the sparkling sauterne was declared “adulterated and misbranded.” They charged, and the District Court agreed, that the purported sparkling sauterne was an imitation, consisting of a plain white wine, artificially carbonated. In a parallel case a similar judgment was made on bottles of Bauer’s “Sparkling Burgundy.” Again he fought the verdict and took it to the U.S. Court of Appeals. Again the judges concurred with the earlier ruling and directed Bauer to pay a fine of $100 and court costs, amounting to $73.06.

With such gentle financial slaps on the wrist when caught cheating, no wonder Bauer’s company continued to thrive. It was, however, antics such as his that fueled the Prohibition movement that ultimately shut down his liquor business permanently in 1920. Because details of Alexander Bauer’s personal life are hidden in the fogs of time, it is impossible to know his fate but we can assume there might have been a measure of larceny involved.
Posted by Jack Sullivan at 2:22 PM