Phillip Hamburger Made a River of Whiskey 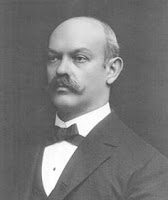 Phillip H. Hamburger, shown here about 1900, was not the first distiller to conflate Pennsylvania whiskey with the Monongahela River that flows through the Keystone State. That waterway had been identified with strong drink since the 18th Century. But Hamburger made the Monongahela the centerpiece of his merchandising and his whiskey was, as a writer recorded in 1904, “not only known from ocean to ocean, but in every civilized country on the globe.”

During his early years, Hamburger undoubtedly did not know what or where the Monongahela was. He was born in 1849 of Jewish parentage in Hammelburg, Germany. Hammelburg is a town in the district of Bad Kissingen, in Lower Franconia, Bavaria, Germany. Situated on a river, it is also a major wine making center. 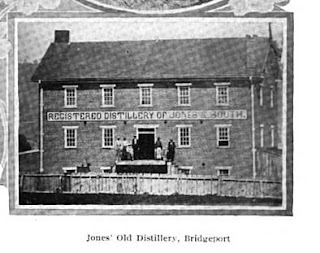 When Phillip was about 17, possibly escaping service in the Kaiser’s army, he emigrated to the United States, settling in Pittsburgh. By 1870 he had established a partnership with George W. Jones, a liquor merchant who owned a primitive distillery at nearby Bridgeport, Pennsylvania, on the Monongahela River, as shown here. Hamburger branched out on his own, in 1871 establishing a wholesale liquor business listed in Pittsburgh directories as Ph. Hamburger Co., at 230 Fifth Avenue. Apparently as a result of requiring increasingly larger quarters, he moved in 1873 to 96 Liberty Street and again in 1877 to 29-30 Diamond Square. He would remain at that location for the next 15 years.

Phillip’s personal life was also becoming more active. Not long after arriving in Pittsburgh, he married and soon was the father of a growing family, including one son, Alfred, and three daughters. According to census data, the family first lived at 167 Fayette St., Allegheny, but subsequently moved to 467 S. Rebecca in the Bloomfield Section of the city.

During this period Hamburger was helping to finance Jones’ distillery. Jones was being hounded by creditors and in 1882 Phillip gave him $12,000 to help him pay off his debts. A year later Hamburger bought the distillery outright, giving Jones -- according to court records -- $16,273.49 for the distillery and brand names. Jones stayed on as the operator and essentially ran the plant as he had before, now paid a salary capped at $1,200 annually. 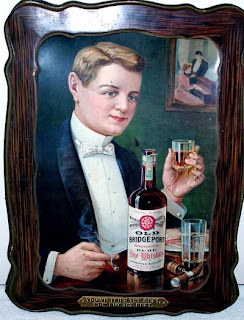 the debts Jones had incurred. Subsequent court decisions agreed and Hamburger ultimately was held liable for claims against his ex-partner. Hamburger had contended that Jones was in bad health and wanted release from the burdens of ownership. After Jones died in 1886, Hamburger for a time continued to operate the distillery under Jones’ name. In 1890 he changed it to the Ph. Hamburger Co., Distillers, amended later to the Hamburger Distillery Co., Ltd.

Once he had achieved full ownership, Hamburger moved ahead boldly to expand his
facilities and his market. He built significantly onto the orginal plant and warehouses. A contemporary publication reported: “The Hamburger Distillery, Limited, is one of the largest plants of the kind in the world, covering about fourteen acres of ground. Almost all its buildings are of brick, of the most modern style of architecture for the purpose to be served, and its warehouses are thoroughly equipped with all the latest improvements and devices, thoroughly ventilated and heated by steam....The capacity of the warehouses is about 60,000 barrels.”

Hamburger also enhanced his Pittsburgh wholesale house. It boasted a four-story building in which he carried large stocks of his own product, including G. W. Jones Monongahela Rye whiskey, as well as imported wines and liquors. He employed 16 workers and had a staff of traveling salesmen who were constantly on the road visiting saloons in many parts of the U.S. He also opened an office in New York City. Increasingly the Americans drinking public began to believe that Monongahela meant quality whiskey. 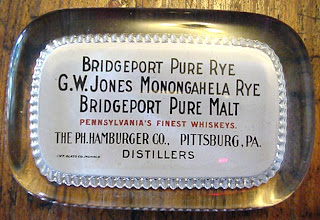 Hamburger advertised his brands extensively in newspapers and magazines. As shown here his ads had a sophistication unusual for the times. He featured three brands, all shown on the paperweight here. Both Bridgeport Rye and Bridgeport Whiskey boasted the Monongahela origin on their labels as did Hamburger’s giveaway tip trays and paperweights. The third brand featured the river in its name, as shown here on a giveaway pocket mirror. All three acquired a national and even international customer base. In 1914, Hamburger’s whiskey won a gold medal at the Universal Exhibition in Nottingham, England, and again in 1915 at the Panama-Pacific International Exposition held in San Francisco.

Phillip became recognized as one of Pittsburgh’s leading entrepreneurs. Three times he was selected to represent the City’s Chamber of Commerce for European conferences and trade delegations. He also was hailed for his philanthropic work, serving as a director of the Federation of Jewish Philanthropies and of the National Jewish Hospital for Consumptives. Early in the 1900s, having made his mark, Hamburger turned over the day to day operations of his whiskey enterprises to a manager in order to, he said, concentrate on his charitable work and business representation.

He continued to play an important role in the U.S. liquor industry. In December 1903, the Kentucky-based Wine & Spirits Bulletin devoted considerable space to Hamburger’s letter summing up the state of the Nation’s whiskey trade, as he looked back on the year just past and into the future. There had been no whiskey business failures of any importance in 1903, he noted, and for the future he speculated that “a presidential campaign, which we are going to enter into during 1904, will be an additional factor to a still larger consumption of goods in our line.” Hamburger concluded by asserting that “the trade is in a healthy condition.”

Although he had reached the pinnacle of his profession, life had a great heartache 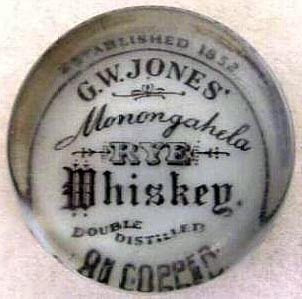 awaiting Hamburger. In October 1905 the New York Times reported that his son, Alfred, after renting a hotel room in Manhattan, had killed himself by a gunshot to the head. Eventually too Prohibition killed off the business he had built and, shortly after, Phillip’s own time came. As he was laid to rest in June,1921, three daughters, the remaining members of his family, stood by his graveside.

After Repeal in 1934 the Bridgeport facility was sold to other interests. By 1980 the buildings had become the home of a coal company. Nevertheless, within a relatively few years this German Jewish immigrant had grown a liquor empire that made Monongahela synonymous with good whiskey the world around. Phillip Hamburger had produced a river of whiskey in more ways than one.