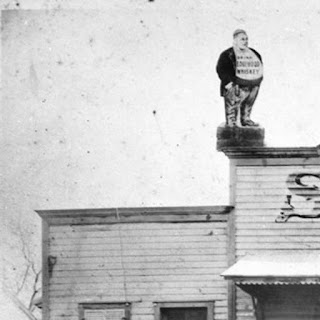 “Daddy, who is that fat man standing on top of the saloon?”  That question probably was asked frequently in the early 1900s and Daddy likely knew the answer: “He’s the Edgewood Whiskey Man.”   Two closely related Cincinnati families also knew the answer.  The Paxtons and the Diehls had created the Edgewood Man and the liquor that the figure represented.

Thomas Paxton was born in the Ohio in 1844, the son of Samuel and Hannah Paxton, whose ancestors had emigrated from Northern Ireland in the 1700s. He would be joined in the family by a sister, Adelaide,  born in 1849, and a brother, John born 1851.  In 1874, age 23, Adelaide married A. G. Diehl, an enterprising young merchant.

In 1874 Cincinnati city directories A.G. Diehl & Co. Wines and Liquors first is listed, located at 32 East Second Street.  A separate listing for the same address lists Paxton & Diehl, Distillers.   A year later the company name became Diehl & Paxton Brothers. The brothers were Thomas and John. Two years later, the business listing was changed again to Paxton Bros. & Co., designating them as “wholesale dealers in wines, brandies, and whiskies.”  The directory noted that the house had been established by A.G. Diehl. 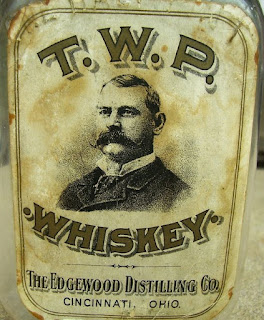 Paxton Bros. occupied a large brick building, four stories in height and 20 by 100 feet.  According to a contemporary report,  the company “enjoyed a large and permanent trade throughout all this section of the country.”  It stated 10 persons were employed at the company to supply its public and wholesale customers.

The Paxtons’ business was highly successful and mentioned prominently in an 1886 book of leading companies in Cincinnati.  At this time, Thomas Paxton, shown right on a whiskey label, was president,  and Samuel Paxton, his father,  was an officer.  John Paxton had died in 1881, only 30 years old.  Moreover, A.G. Diehl was no longer in the picture.

During the late 1870s or early 1880s the company made Edgewood Whiskey its flagship brand of blended whiskey of both sour mash and rye.   As an advertising gimmick the Paxtons selected the figure of a man wearing a Shriner’s fez and a tuxedo.  His most prominent features were a wide spreading belly and the words written across his chest:  “I drink Edgewood Whiskey everywhere."

He quickly became widely known as the Edgewood Man and his bulging figure became a familiar one both on top of and inside saloons across much of the United States.  He was presented to the public in painted plaster  and ceramic  statues, as well as figural decanters and on back of the bar bottles.  The Fat Man even appeared on a corkscrew,  lying prone. 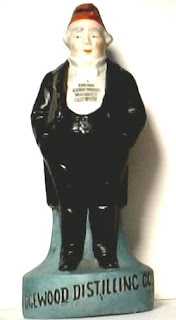 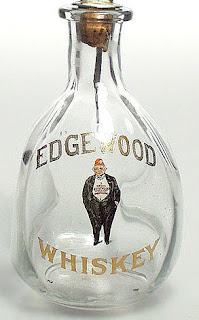 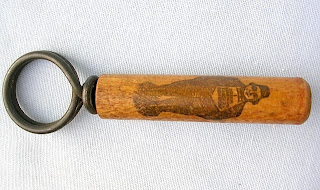 Throughout its existence Paxton Bros. was principally identified with the Fat Man and in 1887 it changed its name  to the Edgewood Distilling Co.  The Edgewood Man’s celebrity was such that at the 1906 National Homeopathic Convention, an audience presentation described a subject male:  “He stares before a convex mirror and sees himself broadened into the proportions of an Edgewood Whiskey advertisement.” Describing San Antonio, Texas, in the early 1900s, an author stated: " There were big signs all over town of the Edgewood Whiskey fat man....” 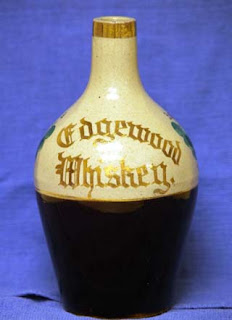 After A.G. Diehl’s son, George, joined the firm, ultimately to become its chief executive officer,  a publication devoted to Cincinnati business leaders included a caricature  that portrayed Diehl as the Edgewood Man.  Diehl succeeded Thomas Paxton in running the company, when his uncle, a diabetic,  died in 1904 of  “pyemia,”  This was a disease said to be caused by a massive bacterial infection. Paxton was buried in Loveland Cemetery in Clemont County, Ohio.  He lies in the same plot with his mother and his father. 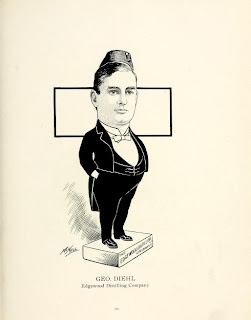 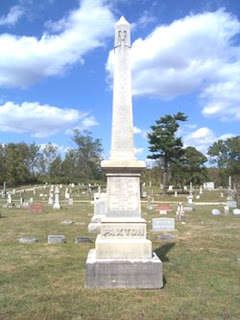 The nephew guided the company successfully for the remaining 12 years of its life.   When Ohio voted complete prohibition of alcoholic beverages in 1916,  Edgewood Distilling and Paxton Bros. Co. went out of business forever.  The Edgewood Man, as a result, faded from the scene.   Left behind were a great many artifacts to remind us of the fat gentleman with the fez.

Posted by Jack Sullivan at 6:13 AM