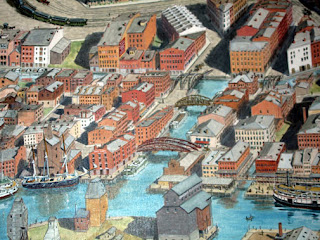 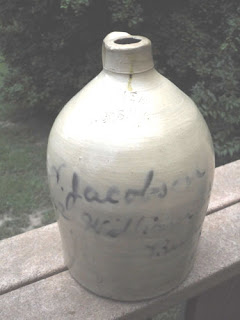 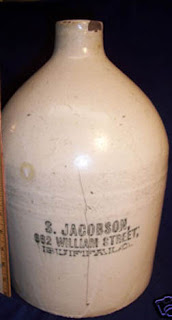 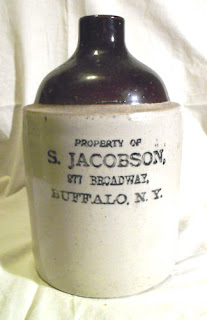 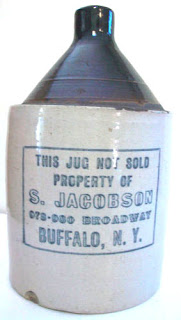 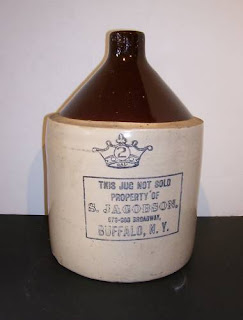 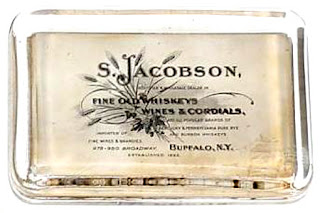 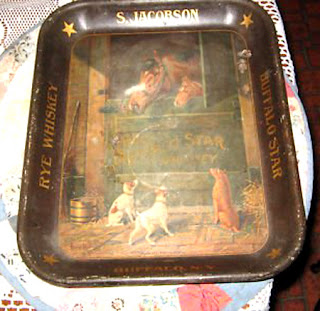 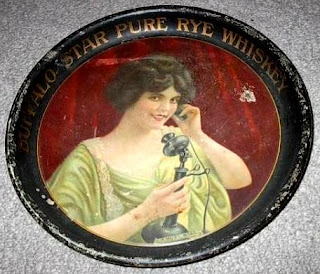 As shown here, Solomon Jacobson, a prominent Buffalo, New York, whiskey dealer, provided a bottle-shaped clock to favored saloon customers for display behind the bar. It was an entirely appropriate gift from Jacobson given the role his good business timing played in his success.

Jacobson began business as a rectifier and wholesaler of whiskey during the heyday of the Erie Canal and the Great Lakes sailing ships. The port area, shown here in an illustration, teemed with dock workers and sailors, many of them hard drinking lads. Jacobson supplied spirits to the proliferation of sailors’ bars along Canal Street and adjoining avenues. During the latter half of the 1800s, the area was reputed to hold more than 100 saloons, brothels and dance halls.

Jacobson’s first Buffalo address was 662 Williams Street, not far from Canal. He supplied saloons with liquor delivered in pottery jugs. Many of those early containers, as shown here, were beehive shaped and decorated with cobalt script. Some bear the mark of the Fisher Pottery, which made jugs in Lyons, New York, from about 1878 until 1902. Others bearing Jacobson’s William Street address were unmarked.

Canal Street was a rough place. Hidden under its streets and back alleys were whiskey dens where young seamen, freshly landed off the Lakes, were lured, fed drugged drinks, robbed of their wads and sometimes murdered. Their bodies reputedly were slipped into the canal with stones around their necks as though they had committed suicide. Jacobson eventually opted for a less dangerous, more advantageous environment.

Having prospered in the port area and with a growing reputation for the quality of his liquor, Jacobson moved his operation to 978-980 Broadway. His company first shows up in local directories at that address in 1900. Jacobson’s timing was indicative of Solomon-like thinking. The timely change offered him several important advantages: First, it gave him larger quarters for his rectifying activities and sales. Second, it put him closer to a new and rapidly growing client base, the large German and Polish immigrant population settling in Buffalo and living in the vicinity. Third, Jacobson must have intuited that the Broadway area soon would become the center of a major retail hub, eventually boasting the largest department store in the city. His liquor establishment was right in the midst of it all.

Jacobson quickly added the new address to his whiskey jug, moving as well to more ”modern” shoulder jugs that were less expensive and easier to stack. Although most of those ceramic containers have no marks, the third shown here is from the Robinson Ramsbottom Pottery of Roseville, Ohio. During the approximately 12 years Jacobson was located on Broadway, he also issued a number of giveaway items to favored customers, mostly saloons. They included the bar clock shown earlier, a paperweight. and at least two designs of tip trays. Shown here, the trays advertised “Buffalo Star Rye Whiskey,” Jacobson’s flagship brand. The first tray depicts three dogs in a paddock looking up at a horse and her colt. The second tray, with a comely lady on the telephone, was made about 1913 by the American Art Works of Coshocton, Ohio.

Although the Broadway address continued to be listed in local directories, Jacobson reputedly made a final move to an address about 1918 to Buffalo’s Washington Street. Again, he moved apparently because the timing was right. According to one observer: “As the neighborhood became more family oriented and new merchants were primarily retail clothiers, linens and housewares suppliers and grocers, Jacobson's business became less fitting for the area. Pressure from a major church located only a block away certainly helped influence the decision to move back closer to the downtown area.” Shortly thereafter, time ran out on Jacobson and his liquor business as National Prohibition was imposed and he was forced to close in 1919.

Details about Solomon Jacobson’s personal life, including birth and death dates, marriage and family, are virtually nonexistent. Relatives seeking genealogical information about him online seem to have little to go on. There is a record of his being being very generous to charitable causes, including the donation of $1,000 toward erection of a new Jewish hospital in Buffalo. Jacobson also was active in Temple Beth El Synagogue and was elected a trustee and first chief usher of that congregation in 1923.