It often has been said that Kentucky’s major attractions are whiskey, horses and attractive women.   I 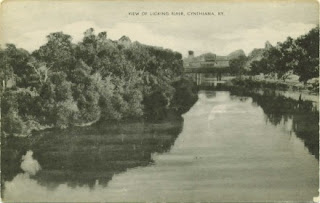 have no information on the last named, but Frank E. Lalley,  a Connecticut  liquor dealer and entrepreneur, made Kentucky whiskey and Kentucky-bred horses, a major passion in his life.

It may be a stretch to call Lalley, a “Yankee,” because he was born to Irish immigrant parents  in 1859.  But his birthplace was Massachusetts and he grew up in New England,  eventually relocating to Connecticut. That should be sufficient pedigree to qualify as a Yankee.  Lalley settled in Bridgeport where in the early 1880s he opened a wholesale and retail liquor store.  He may also have operated as a “rectifier,” blending raw whiskeys to taste and bottling them under his own labels.

Like other rectifiers,  Lalley seems to have been troubled by the need to keep a steady supply of  raw whiskey.  During the late 1800s there was a trend toward Eastern liquor interests either to buy distilleries in Kentucky or to contract for their entire annual output.  Whiskey dealers not in on the 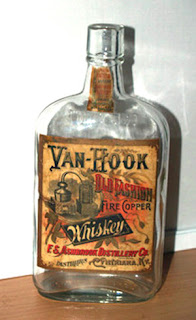 game could find themselves without needed supplies.  As Lalley looked for a supplier, his attention fell on the town of Cynthiana in Harrison Country, Kentucky.

By 1882 the mashing capacity of the distillery was 300 barrels daily with an output of 3,000 barrels annually.  The three warehouses had only capacity for 7,500 barrels which necessitated rapid sell off of “young” whiskey, exactly the ingredient Lalley was looking for.   After a succession of owners in 1888 the Van Hook Distillery was sold to Felix S. Ashbrook, young member of a well-known Kentucky whiskey family.  He renamed the distillery for himself but kept the Van Hook whiskey brand.  In time,  possibly acceding to the blandishment of Eastern money,  he sold a major interest to Lalley and others in a combine.  Frank Lalley became president of the distillery, which continued to be managed by Ashbrook.  Under their direction the plant grew considerably.

With his whiskey supply more assured,  Lalley’s business seems to have 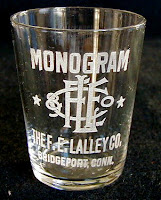 prospered. His featured brands were “Brooklawn,” “Three Star”  and 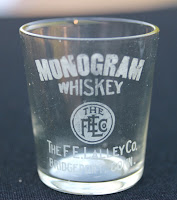 “Monogram.”  He put his liquor in elaborately embossed square bottles, as shown here, and issued shot glasses bear his labels to favor customers.  The 1910 U.S. Census found Lalley at the age of 51 living with Mary and all four of his children in an upscale Bridgeport neighborhood.  His occupation is given as “wholesale merchant and liquors.”   Son Frank was selling life insurance. The other children were either at home or in school.  The Lalleys could 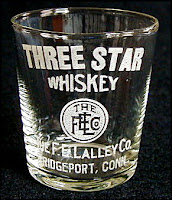 On his frequent trips to Kentucky,  Lalley caught “horse fever.”  He began to invest in equines for harness racing. Rather than own part or all of a horse farm, his strategy was to buy already tested racers, itself an expensive proposition.  His signal most important purchase was of a horse named Peter Manning,  shown here after a cigar was named for him.  Peter Manning was the World Champion trotter, having done the mile in 1.56 minutes.  Recognizing that people would want to see this 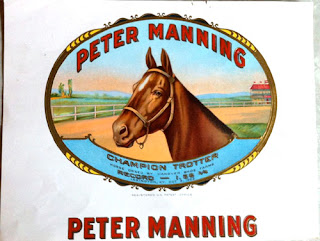 horse personally,  Lalley put the horse to trotting exhibitions at dozens of county and state fairs.  The prize horse later was sold to the Hanover Shoe Farms where he remained an attraction.

The onset of Prohibition caused a major change in Lalley’s life. Not only did his liquor dealership shut down, the Harrison County Distillery was closed.  Over the next few years the whiskey stored there was shipped by rail to a central location where it was bottled and distributed to medical supply houses for “medicinal 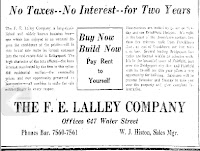 purposes.”  The distillery buildings were put to other uses.  Lalley was in his early 60s when these events occurred but vigorous enough to launch on another career.  He became a major force in the real estate market in Bridgeport, advertising widely in local newspapers.

As he aged, Lalley’s health declined.  He was stricken with cancer and began to spend his winters in Florida at the home of his daughter Mary.  In March of 1939 while living in Palm Beach, age 80, he fell and fractured his hip.  Not long after he died of complications. He was eulogized, one obituary said:  “...As a genial, modest man who enjoyed an extensive acquaintance among both business and horseman friends throughout the United States.”  In short, this Connecticut Yankee  “went Kentucky,”  fell in love with its whiskey and horses -- and was fondly remembered for both.