P. Vidvard & Son Wrote Their Names in Cobalt and Stone 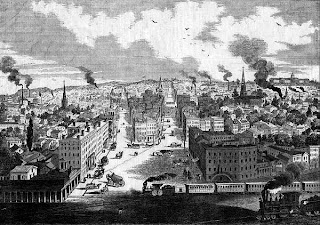 Peter Vidvard, an immigrant from France, and members of his family proved to be extraordinary entrepreneurs,  using the money from selling liquor to fund a number of notable enterprises in Oneida County in central New York State.  In the process Peter and son imprinted their names in stoneware and in stone.

The story begins in Nancy, France, where Peter Vidvard was born in 1821.  While details of his early life are sketchy,  it is known that he emigrated to the United States about 1843, settling in Utica, shown here as it looked at mid-century.  Then about 22 years old, Vidvard appears to have entered the retail grocery trade at a time when selling liquor was a principal profit center. Four years later, having saved a little capital, he started his own business, selling liquor and cigars, located at 29 and 31 John Street in Utica.  Later he issued a certificate worth 15 cents in trade noting that address.

About the same time he married a woman several years older than he was.  Her name was Catherine (nee Oster) and like Peter had been born in France and had come as a child with her family.  Her father was John Oster  a well known grocer who owned a landmark hotel in Deerfield Creek, a village adjacent to Utica.   The records indicate she apparently had an earlier marriage and had been widowed with two children before her marriage to Vidvard.  The couple would go on to have six children of their own,  four girls and two boys. 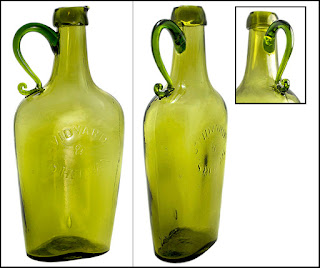 Peter Vidvard’s business success was rapid, with sales notable throughout Central New York.  As a sign of his prominence, in 1859 he was elected treasurer of the New York State Liquor Dealers Association.  He also brought family members into the business.  Both sons,  John, and, Jules (sometimes rendered Julius), were groomed from an early age to the whiskey trade, working as clerks in their father’s store.  He also employed his nephew,  Francis X. Oster,  as a  salesman traveling throughout much of New York State.  When his stepdaughter,  Josephine,  married an Irish Immigrant named John Sheehan,  the son-in-law was brought into the firm.  In 1868 Peter took the step of making him a partner and changed the company name to Vidvard and Sheehan.  A bottle with that name is shown above. 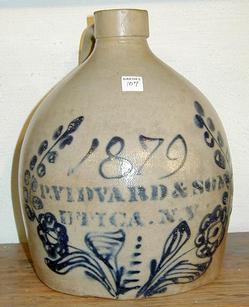 Meanwhile, John Vidvard was demonstrating considerable talent as a businessman.  At the age of 21, with backing from his father’s “large command of capital,”  he started his own company in 1873 to manufacture and sell cotton pants, overalls,  and shirts. He also dealt in other dry goods sold at retail.   Two years later John took over an Oneida County brewery that had been destroyed by fire and rebuilt.  He changed the name to Vidvard Brewery but sold it just a few years later.

The year 1879 marked a major change in the Vidvard firm.  John Sheehan had departed the partnership in 1878 to start his own wholesale and retail drug company in Utica. 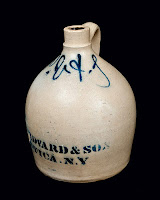 Almost immediately Peter made son Jules a full partner and changed the firm name to P. Vidvard & Son.   He marked this occasion by commissioning a special whiskey jug that displayed the new name and the date.

He ordered this stoneware containers from the famous White’s Utica pottery.  This ceramics factory had been founded  in 1839 by Noah White, formerly a barge pilot on the Erie Canal.   White saw that Utica was an ideal spot for a pottery.  The canal could be used to transport clay from New Jersey and return finished products to markets in New York City, 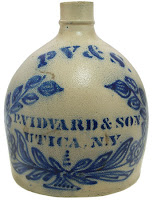 Boston and Philadelphia.  His stoneware, as the crock shown here, often used hand-drawn cobalt designs.  Vidvard saw the benefit of having his fancy containers made right in town.  Note the similar decoration on the 1879 whiskey jug.   Other containers shown here, although unmarked, also show White’s Utica characteristic features.

Although the Vidvards continued to prosper, their success was not without its pitfalls.  In  1881 a local woman named Margaret Rawlins filed for civil damages against Peter Vidvard.   In court she testified that her husband, 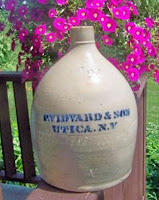 upon whom she and her children depended for support, went drinking at the bar of a Utica hotel called the “The Yorkville House.”  She claimed that he got drunk on liquor sold him there, fell from the loft of a barn on the premises, broke his arm and sustained other injuries that prevented him from working for more than six months.

Although Vidvard owned the hotel, he had leased it to a “Mrs. B” who operated it.  Ms. Rawlins obviously saw Peter, rather than the hotel management, as having the deep pockets to pay compensation.  The jury was sympathetic to her story and awarded her $150.  Vidvard appealed the verdict to the New York Supreme Court which ruled on the case in 1884.  The high court overturned the earlier verdict finding that there was no evidence that Vidvard had been responsible or negligent in any way for the accident.  It stated: “If the sale of three glasses of whiskey to the same person within a few minutes would authorize an award of exemplary damages against a tenant, it would not be in a case against a landlord without further proof.”  And there was none.

Happy as Peter must have been about the judgment, he was facing other difficulties.  His nephew,  Francis X. Oster,  in 1884 had quit his uncle’s employment and struck out independently.  Initially with partners, Oster started his own wholesale and retail liquor business in Utica, competing with P. Vidvard & Son.  More important,  Peter’s own health had been declining for the past several years.   In June 1885, he died, age 65 years, 9 months and 12 days old.  A member of St. Mary’s Catholic 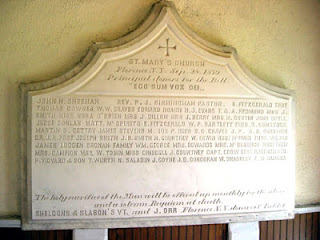 Church in Utica, we can assume he was buried in the church cemetery at Webster and Eagle Streets, surrounded by grieving family and friends. Although written before his death, the following tribute in a tome called “A Historical, Statistical & Descriptive Review” of Oneida County might serve for Peter’s obituary: “We may fairly say that no one in this community is more highly respected and esteemed for his general upright dealing and amiable and generous disposition.”

The business of P. Vidvard & Son was carried on by Jules for a number of years after his father’s death.   White’s Utica Pottery, challenged by competition for markets, went out of business in 1910.  Thus all the containers shown here are at least 103 years old and possibly a decade or two older.

Lacking a picture of Peter Vidvard tombstone,  we do have his name carved in marble as one of the donors in 1870 to purchase a new bell for St. Mary’s Church.  It can be found at the lower right hand corner of the list of names on the tablet shown here.  Unlike the other people memorialized for their gift, Peter chose to advertise. The name inscribed is P. Vidvard & Son.

Posted by Jack Sullivan at 8:12 AM