Pre-Prohibition whiskey men be recognized for a lot of reasons,  some bad, some good.  A plethora of court cases can get someone known, as can violators of the 1906 Food and Drug laws.  On the positive side we remember those early liquor dealers who gave the public not only a good drink but an artistic merchandising approach.  In that context,  James E. Wolcott of Rochester, New York, and the liquor company bearing his name deserve to be remembered as superior for their contribution to artistic tip trays.  Wolcott was “tip top” with that saloon giveaway. 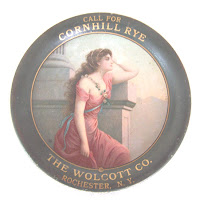 Wolcott was born in Rochester on April 20, 1850.  We have the unusual benefit of having him captured by the U.S. Census of that year as a one month old baby.  His father, George, was a 33-year-old liquor dealer in the New York town; his mother Caroline, five years younger.   A two-year-old brother, Henry, rounded out the family in 1850.  James attended the public schools of Rochester and also, according to a biography, spent time at Professor Satterlee’s secondary school. 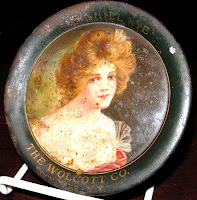 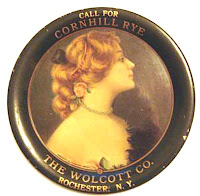 As a kind of natural progression,  he entered his father’s liquor business at the age of 22.  That establishment had been founded in 1827 by E. Pherus of Rochester.  Within a few years George Wolcott and his brother bought out Pherus out. When the brother retired, George brought James into the business as a partner but after a few years, the father too retired and the son was left to run the organization.  In the meantime James was having a personal life.  In 1874 in Rochester, he married Isla J. Chase who like himself had been born in New York.  They would have three children,  Carolyn, George and Charles. 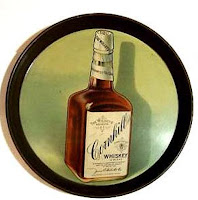 James Wolcott proved to have a real genius for merchandising his liquor.  In an 1877 Rochester business directory he described his firm as “Distillers, rectifiers, and wholesale dealers in pure double copper distilled old rye, bourbon and wheat whiskies....”  The address given was “East End of Clarissa Street Bridge.”  That was the company’s location during its entire 90 years of existence.  In the 1880 census, Wolcott described his occupation as “distiller.” More likely he was a rectifier,  blending a number of his own brands from raw whiskey obtained elsewhere.  Among his labels were “Wolcott’s 1827 Rye,” “Brookdale,” “Delaware,” “Malted Wheat Whiskey,” and “Old Candlelight Rye.” 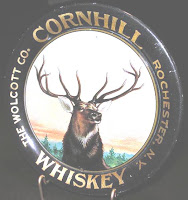 The flagship brand was “Cornhill Rye,” first listed as the company “specialty” in 1895.  It was a name with strong recognition for many Rochester residents.  Corn Hill was one of Rochester’s most historic districts and Clarissa Street , named after the daughter of an early land owner, one of the district’s well known avenues.   As early as 1810 freed black slaves were living in Western New York and Rochester’s first African-American neighborhood was located there.  Corn Hill is currently on the National Historical Register.

Where Wolcott really came to distinguish himself was in his saloon giveaways.  Tip trays, usually about  six inches in diameter,  had come into fashion for all sorts of businesses as the process of color lithography on metal became perfected in the United States.  For bars and restaurants, however, trays were a “natural.” 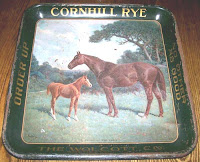 Recognizing their promise, J. E. Wolcott & Company advertised Cornhill Rye with a wide variety of these items.  Shown here are an array of trays, three with the pictures of comely women and others depicting a bottle, a stag and a mare and her colt.  The tray with the illustration of an Indian chief is perhaps the most interesting.  It appears not to have been produced by a lithographic process and looks almost hand painted.  The firm also gave away to favored customer shot glasses advertising Cornhill Whiskey and a tall glass for its 1827 Highball Blended Whiskey. 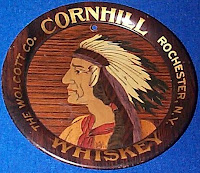 If making and selling whiskey was his occupation, raising and racing horses was Wolcott’s passion,  indicated by the horses on a tip tray and repeated illustrations of equines in his liquor ads.  Regularly owning one or two thoroughbreds,  Wolcott was a member of the Gentlemen’s Driver Association in Northern New York and regularly raced his steeds on the Rochester Raceway, in 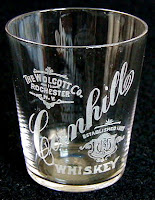 which he had a financial interest.  His biographer says that this whiskey man became a well-known figure in racing circles and it was bruted about “that any horse belonging  to James E. Wolcott was sufficient guarantee of its worth and highbred qualities.”  Walcott also was active as a Mason and attained the 32nd degree in the Scottish Rite.

His outside interests likely were the cause of Woltcott’s leaving his company’s management and ultimately its ownership.  About 1880 he had hired a Wisconsin-born clerk named  John F. Zimmer.  Zimmer had come

to Rochester as a child, been educated there and got his start in business with J.E. Wolcott & Co.  He had risen through the ranks, been made a partner, and in 1900 entered into an ownership agreement with Walcott for the company.  Zimmer reorganized it, naming himself as president and Thomas J. Naylon as secretary.  He kept Wolcott’s name and location.  It has been suggested that some of his financing might have come from the New York & Kentucky Company, one element of the so-called “Whiskey Trust.”

After leaving the whiskey trade, Wolcott continued to be a major financial actor in Rochester.  He was a director of the Genesee Valley Trust Company and the Traders National Bank.  His biographer says of him:  “His opinions regarding financial and other business matters were considered sound and his ideas concerning management and experience were often received as conclusive.”

Still a young 56 years old,  Wolcott was in Norfolk, Virginia, when he was stricken and died on November 24, 1906.  The cause of death was given as “apoplexy,”  a term not in general use today that once covered everything from strokes to heart attacks.   His funeral was held in St. Luke’s 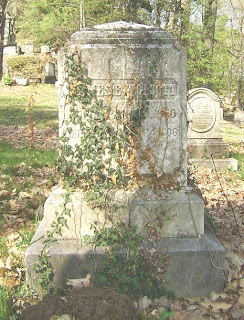 Episcopal Church, where he had been an active member, and he was buried in Rochester’s Mount Hope Cemetery while his grieving family stood by the graveside.  Shown here is Wolcott’s ivy covered headstone.

Wolcott posthumously earned a long biographical eulogy in the 1908 “History of Rochester and Monroe County” by William F. Peck.  Although Peck lavished on him many positive attributes, I believe the better tribute was presented shortly after his death as a resolution of the Vestry of St. Luke’s Church.  The resolution said of James Wolcott:  “Modest, kindly, firm and high-minded, the soul of honor and of courtesy in all his relationships and responsibilities, he illustrated in an eminent degree the qualities and the virtues of the Christian gentleman.”

The Wolcott Co. continued in business under Zimmer until 1917 when closed by the creeping paralysis caused by the coming of Prohibition throughout America.  As noted earlier,  the firm had survived 90 years at the same location, most of it under the Wolcott name.