“Do you want to super-size your order?”  None of us escapes being asked that fast food question in the new Millennium.   In the whiskey trade, however,  supersizing was the norm in the 19th and even into the 20th Century,  kept alive by a liquor dealership founded by Marcello Triaca of Baltimore.

The practice began in the 18th Century when whiskey was dispensed  by merchants to customers who brought their own containers,  usually jugs,  to

be filled.  In those days bigger was better.   It meant fewer trips to the store for replenishment.   So whiskey often was taken away in one,  two, three and more gallon jugs.  In the latter part of the 1800s, however,  whiskey merchandising changed.   Glass bottles began to replace stoneware jugs.   Containers got smaller.   Customers gravitated to quarts and flasks, even pints.  A few whiskey men,  however, continued to sell their products in “super-sized” quantities.  Among them was Marcello Triaca.

The Triaca Company first appeared in Baltimore directories in 1882 under the  full name of its founder.   Marcello Triaca was identified as a wine and liquor distributor,  whose store was located at 98 Light St. Wharf and One Camden.   By 1890 the firm address had changed to 300 Light Street and 5 W. Camden.  Triaca also was known as a Baltimore restaurant owner. Details about his life are difficult to come by;  he seems to have avoided the census takers.

Self-described as “importers and dealers,”  in liquors and wine,  the Triaca Company had a strong advertising presence and at least a regional and even a national market for its multitude of brands.   They included “Old Triaca Club Whiskey,”  “Special Reserve Celebrated Rye,”  “Old Shoreman,” “Old Pardex” and “Old Nestor.”  Gin brands were “Old Orchard” and “Tipperary Dry.”

The Triaca Company consistently featured its whiskey super-sized.  Gallon and two gallon jugs were the norm.  Shown here are an example of beehive gallon jug,  approximately 10 and 1/2 inches high,and a shoulder jug of about the same size.  Evidence that Marcello’s firm still was super-sizing before and into the 20th Century is evidenced by Triaca Company jugs shown here.  In a period when most dealers were putting their liquors into quart glass bottles, Triaca Company continued to advertise its brands in large stoneware containers.  Symbolic of its frequent use of jugs perhaps, the company sponsored a jug band that played to audiences in Baltimore and vicinity.  One observer said of the Triaca Jug Band that it had a “remarkably unique sound.” 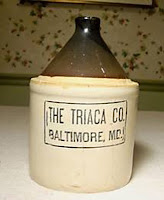 In the late 1890s Marcello Triaca appears to have sold his liquor dealership to two fellow Italians, brothers-in-law Charles Vincenti and Andrew Ciotti.  According to census data, Vincenti had emigrated to the U.S. in 1890 and Ciotti in 1898.  Marcello’s name was was dropped and the firm became Triaca’s Exchange, located at 312-318 Light Street.  Another name change occurred in 1906 when the organization became simply the Triaca Company.  About 1909 the firm moved to the southwest corner of Pratt and Light Sts.   Each location of the company was in the vicinity of the Baltimore wharves where steamboats regularly plied up and down the Chesapeake Bay and beyond, carrying passengers and consumer goods, including cargoes of whiskey.

The new owners also operated another another Maryland whiskey distributorship,  Ciotti & Vincenti Co., and advertised the Triaca brands products along with their own products.   Among these were “Old Troy Maryland Rye” and “Colgate”,  the latter a brand that Ciotti & Vincenti registered in 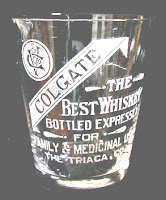 1907.  Shot glasses, shown here, tie the firms together.  The glass touts Colgate as the “best whiskey bottled expressly for family & medicinal use.”  It has the C&V monogram in the upper left of the glass and “The Triaca Company” on the bottom.

The shotglass may provide a clue as to where Triaca obtained its whiskey stocks for jugging and distribution.   Colgate also was a brand name used by the Federal Distilling Company of Colgate Station, Canton, Maryland.  It is likely that Ciotti & Vincenti came to own some or all of that source for the spirituous liquids being purveyed through the Triaca Company jugs.

The Triaca liquor dealership avoided the great disaster to that befell many in the Baltimore whiskey trade:  The Great Fire of 1904.  From February 6 to 8 of that year, a major conflagration in the downtown and wharf area claimed 140 acres, some 70 blocks.  Destroyed were 1,526 buildings.  More than 2,500 business were burned out, including many of the city’s major liquor houses. Thus, it is common in Baltimore city directories to see major changes in locations for whiskey dealers in 1904 and 1905.   Yet the Triaca Co.  continued unabated at its address after the fire,  although the conflagration came dangerously close to its location.

The firm Marcello Triaca founded in 1882,  however, could not avoid the disaster that creeping Prohibition wrought on the whiskey industry in Baltimore and elsewhere.  Charles Vincenti made an attempt, apparently successful for a while, to circumvent the anti-alcohol laws.   Working through the Triaca Company and its employees, he hatched a scheme to bribe Federal officials charged with enforcing Wartime Prohibition during World War One.  He is said to have made a profit of $500,000 -- $5 million in today’s dollar -- from selling 95,000 gallons of illegal whiskey.  Could some of this illicit Colgate booze have been carried as shown here? 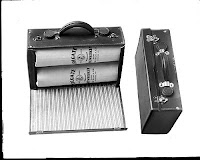 By August of 1920 the Feds had caught up with the perpetrators, arresting 50 people in a major roundup.  Vincenti ran off to the British Island of Bimini, where  he was captured by U.S. agents, causing something of a international incident.  After making headlines in U.S. newspapers for months, Vincenti finally was fined $10,000 and sentenced to prison, along with many of the others he had suborned.  By that time the Triaca Company was out of business.

Whiskey super-sizing also disappeared with Prohibition.  When Repeal came, selling hard liquor in a container of a gallon or more was forbidden.  The largest bottle liquor sold today is the 1.5 liter,  about 40 percent of a gallon.  Unless, of course, one ventures into the hills for a jug of moonshine.  There it still may come super-sized.

Note:  Material for this article comes from a variety of sources, including Baltimore city directories.   A key source was an article entitled “Maryland Rye:  A Whiskey the Nation Long Fancied -- But Now Has Let Vanish,” by the late Jim Bready that appeared in the Winter 1990 issue of the Maryland Historical Magazine.