Otto Wagner and His Jugs of Distinction


At a time when many liquor dealers were putting their alcoholic beverages into glass containers,  Otto Wagner, a major retail and wholesale whiskey distributor in Tiffin, Ohio, persisted in employing  ceramics for that purpose.  As a result he left behind a variety of stoneware jugs second to none in the Buckeye State or perhaps anywhere else.

Wagner was born in Ohio in 1865,  just after the end of the Civil War.  His father was Francis Wagner, an immigrant to the United States from Germany as was his mother, Mary.   The parents settled in Tiffin, the seat of Seneca County in Northwestern Oho. The Wagners had six children,  four girls and two boys.  Of the latter,  Otto was the eldest. In a sense he was born to be a whiskey wholesaler and retailer. His father before him ran a liquor store in Tiffin.

It can be speculated that Otto began working in his father’s business at an early age and, as Francis aged,  took over the management during the latter part of the 1800s. He called his company, “Otto Wagner & Bro.”  The

brother referenced was his younger sibling, Ervin.   Throughout its life the company was located at 173 South Washington Street , a major Tiffin commercial avenue shown here on a 1908 postcard.  His immediate neighbor at 174 South Washington was a funeral parlor, a juxtaposition that must have been the occasion for many jokey comments in Tiffin.

Why Wagner preferred to use stoneware containers is not clear.  At the time the Great Western Pottery Company was located in Tiffin, the largest employer in 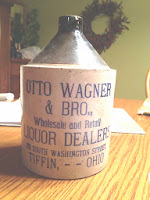 town. Its products were generally ceramic kitchen and bathroom fixtures but an inventory of their pottery products indicates that they had ample capacity to turn out jugs for the whiskey trade. The assumption is that Wagner employed the local

company.  Because he apparently was selling whiskey wholesale to saloons and hotels in Tiffin, Wagner often made use of large jugs.  Shown here are two stonewares clearly meant for the saloon.  One is marked two gallons and the other held a whopping three gallons.

Because Wagner also was selling to retail customers from his South Market Street store, he  needed containers holding smaller amounts of whiskey.  Shown here are three different quart jugs, each of them 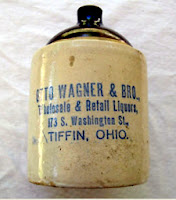 with a different style label.  The printing was applied by the potter with a roller to a partially fired body and then a clear glaze put over them.  Wagner’s jugs varied from fancy letters with serifs to block letters in cobalt to a commonplace san-serif motif. 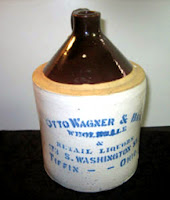 Wagner’s gallon jugs could have been meant for either the retail or wholesale trade.  As shown here, they also run a similar range from fancy through block and plain lettering. This Tiffin whiskey man seems to have encouraged variety in labeling his ceramics.  While all  the jugs here are so-called “shoulder jugs,”  designed to stack easily in a kiln, note that each of the eight sported a slightly different label.

Meanwhile Otto was enjoying a personal life. The 1910 U.S. census found him living on Sycamore Street in Tiffin with his wife. Mary, also an Ohio native.   The couple had two children,  Alma, 10, and Frederick, 3.  Wagner’s occupation given in that census was “liquor merchant.”   Only six years later his participation in the liquor

industry came to an abrupt halt when Ohio voted statewide Prohibition.  The 1920 census found the family at the same address.  This time, at age 54, Otto listed no occupation of any kind.

The Wagner family next appeared in the 1940 census.  Otto was 75 and Mary was 70.  Both adult children were living with their parents on Sycamore Street.  Otto is given as “retired.”  His son, Frederick, was selling insurance.  Four years later Mary Wagner died, followed a year later in death by Otto.  The couple are buried together at St. Joseph’s Catholic Cemetery in Clinton Township, Seneca County. 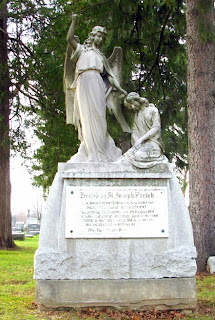 The Ohio whiskey man’s motivation for issuing so wide a variety of stoneware jugs remains unclear.  Given the frequency with which the jugs come up for sale on auction sites,  his liquor business produced hundreds of them.  They make a substantial collection and, more to our purpose, create a hallmark of distinction for Otto Wagner.