The Whiskey Dealer and the President

Some say that Thomas J. Pendergast was just a Kansas City, Missouri, saloonkeeper and whiskey dealer who came to the rescue of a failed clothing store proprietor.  Others say he was a high powered political boss who helped make Harry Truman the 33rd President of the United States.  Both are right.

For many years in the early 1900s Pendergast controlled Kansas City, historians say, much like a CEO controls a large corporation.  Presenting himself as a businessman, he ran the city, providing jobs for the working population, choosing municipal and state leadership, and directing a political “machine” that helped fill his pockets with kickbacks and bribes.  Although he had many business interests,  Pendergast was first and almost always (with “time  out” for Prohibition) a dispenser of liquor.

Born in 1873, he was the last of nine children of Michael and Mary Reidy Pendergast, immigrants from County Tipperary, Ireland.  His father was a teamster, driving a team of horses. Tom attended school until at least the sixth grade.  He later claimed to have attended college for two years but no records have been found to support the claim.  City directories and newspaper accounts, however, indicate that he worked in a variety of jobs during his early years, including as a laborer, clerk, and grocery wagon driver.

Tom arrived in Kansas City at at 17 in 1889 to help out his older brother, James. Known as “Big Jim,” this Pendergast was a power in the local Democratic Party and ran a saloon in the seedy West Bottoms area of Kansas City. He called the establishment “Climax” after a famous race horse of the time.  Initially employed as an accountant by the brother,  Tom proved to be an able student of both the liquor business and politics.  A large, powerful man, he was reputed to be quick with his fists to get his way.

When Big Jim died in 1911, both the keys to the saloon and political power fell into Tom Pendergast’s willing and able hands.   Before long he was operating three saloons on 12th St. in

Kansas City and had branched out into selling whiskey, becoming proprietor of the T. J. Pendergast Wholesale Liquor Company.  Beginning about 1911 Kansas City directories list this enterprise operating at 525-527 Delaware Street in the Midland Building.

Although he was a “new boy” on the Kansas City liquor scene,  Pendergast proved to be very successful at the trade.   Shown here is a liquor crate with his name.  It was found years later in a mysterious sealed room along with thousands of empty jugs,  many of them with the Pendergast label.  Tom’s featured brand early in his career was “Old Grimes Straight Bourbon.” He also was

As his economic  and political fortunes grew, Pendergast married.  His bride was Carolyn E. Dunn,  a woman whose roots were in New York State.  She was nine years younger than her husband.  The 1920 U.S. Census found them living in Kansas City on Parkway at  57th Street.  In their household were three youngsters, Marceline, 10; Thomas, 7; and Aileen, newly born.  With them were Carrie’s sister and three household servants.  Their home was a mansion, shown here, located in a fashionable section of Kansas City.

When National Prohibition dawned, by his own reckoning Pendergast had in stock 14,000 barrels and 1,500 cases of liquor.  Piously, he later  claimed he had a chance to sell his bonded distillery whiskey for a $2 million profit during Prohibition but turned it down because he believed the whiskey would be diverted to bootleggers.  Ending liquor sales in his own operation,  he moved into producing and merchandising mineral water and soft drinks.

Meanwhile Pendergast’s political power was growing rapidly  In 1924 he bought the Monroe Hotel at 1904 Main Street and several years later next to it built a two-story yellow brick building he called “The Jefferson Club.”  From that location Tom is said to have held court and dispensed patronage and controlled city, county and even Missouri state politics.  He also was building a business empire of construction and other companies to undertake public works and services that were fertile sources of graft money.

Enter Harry Truman.  Truman had served with distinction in World War I but found civilian life more challenging. Co-owner of a men’s clothing store in downtown Kansas City he saw the business go bankrupt within two years,  a victim of the 1921 Depression.  A comrade in arms of Pendergast’s nephew, the honest and hardworking Truman soon came to the attention of Pendergast himself,  who backed Truman’s election for presiding judge of the county court.  Truman won and kept the job for eight years.

For all his honesty, Judge Truman never took Prohibition too seriously.  As a youngster he had served a stint “tending bar” in a drugstore.  The druggist kept bottles of whiskey behind the prescription case and local citizens -- some of them vocal Prohibition advocates -- snuck around for a drink rather than be seen entering one of the local establishments.  In his Memoirs,  Truman said he learned “...To think more highly of those who frequented the saloons than I did of the prescription-counter drinkers.”  During Prohibition, the future President was a frequent guest at the 822 Club, an inner circle of Kansas City businessmen who met to play poker and evade the dry laws in congenial surroundings at an elite men’s club.  Truman’s mentor,  “King Tom” as he was called,  always saw to it that Kansas City was wide open to illegal liquor.

All along Pendergast had calculated that Prohibition would not last many years.  In addition to his own sequestered and aging stock, throughout the period he was buying up whiskey receipts.  When Repeal came,  he was positioned to be able to provide aged and bonded liquor almost immediately, profiting handsomely on the return of legal drinking.  By that time most other Kansas City liquor businesses and their brand names had long since disappeared,  leaving Pendergast with virtually no competition.  In short order he became the city’s largest distributor of liquor.  Before long there were allegations in the press about alleged price-fixing of alcohol in Kansas City.  Fingers were pointed at the T.J. Pendergast Wholesale Liquor Company of  2101 Central Street. Nothing was ever proved. 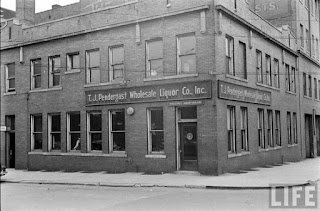 Riding high, Pendergast celebrated by issuing a new brand “Old 1889 Whiskey,” commemorating the year he first came to Kansas City. It was advertised as Kentucky bourbon, aged seven and one-half years, and was a hefty 100 proof.  The brand was introduced in 1934, the same year Pendergast launched Judge Truman on the road to the White House when he handpicked him to run for a seat in the U.S. Senate.  Truman won and went to Washington where he served well. When Franklin Roosevelt sought a compatible Vice President a decade later Truman got the call.  A moderate drinker of bourbon and “branch water,” Truman was in his office with friends pouring a drink when he was told of FDR’s death and his own ascendancy into the White House.

But as Harry Truman’s star was rising, his friend and mentor, Tom Pendergast, was on the skids. A
strong reform movement in Kansas City eventually kicked out machine politicians.  King Tom’s own gambling habits got him into heavy debt, which he attempted to pay off with money from crooked deals.  Arrested and convicted in 1939, he spent 15 months in prison.  While he was incarcerated and even afterward, his son Tom Pendergast Jr. took over the management of the family liquor interests.  Following his release Pendergast lived quietly at home until his death at the age of 73 in 1945.  With scores of family and friends attending his funeral, "King

Tom" was laid to rest in Kansas City's Calvary Cemetery.  Despite many who urged him to do so,  Harry Truman never renounced his friendship with the political boss who gave him his start.

Today Tom Pendergast's  legend lives on as a bad man who gave America a good President.

Note:  Material for this vignette came from a number of sources, including two books, “Tom’s Town: Kansas City and the Pendergast Legend,” by William Reddig and “Truman” by David McCulloch.

Posted by Jack Sullivan at 8:08 AM