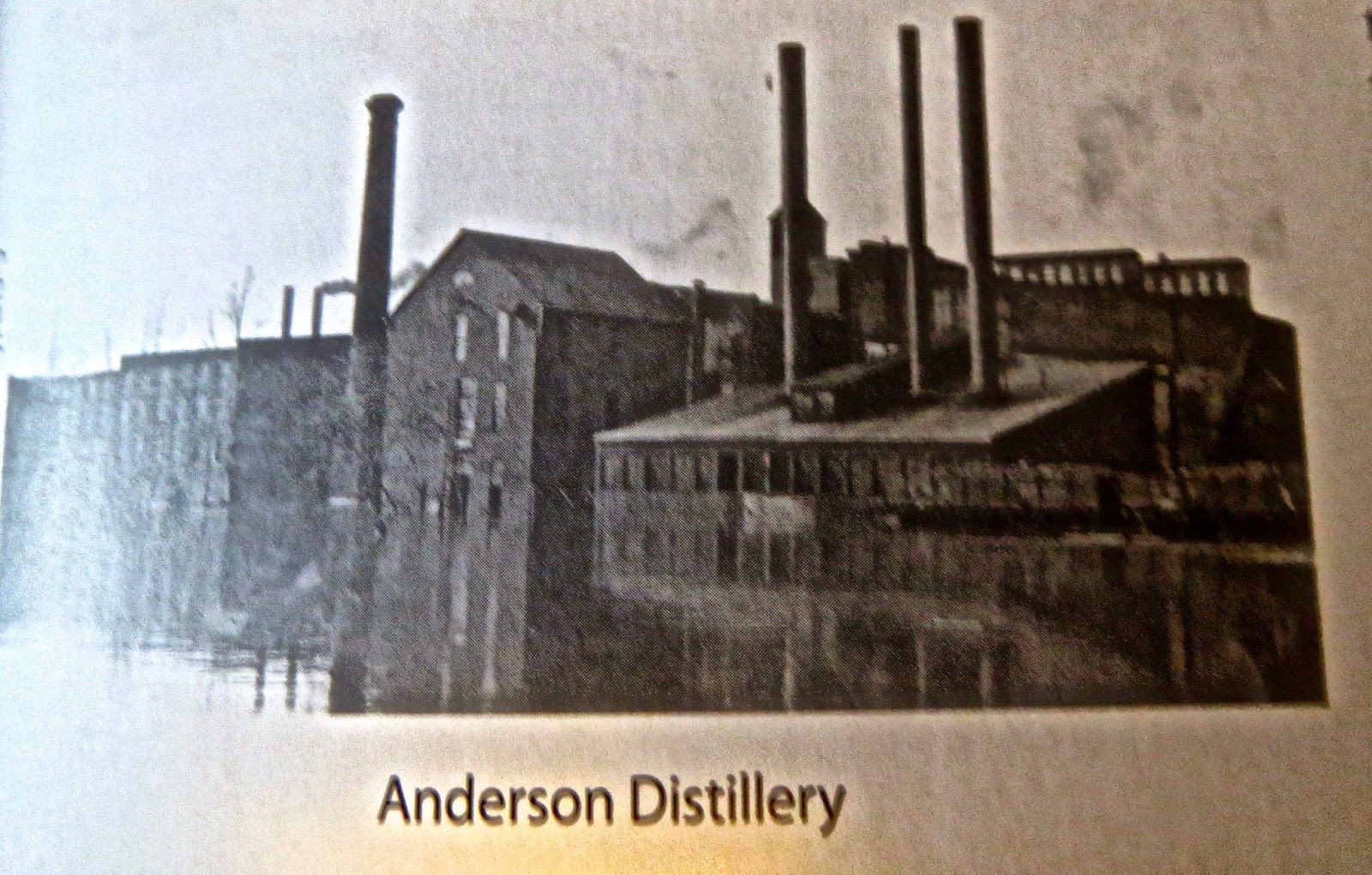 In 1872 George C. Buchanan was accounted the largest distiller in Kentucky, operating no fewer than three major plants capable of mashing 4,885 bushels of grain and producing 500 barrels of whiskey a day.   Twelve years later, forced to sell at auction a mansion he had just redecorated, Buchanan made headlines as the “Bankrupt Whisky King.” Undaunted, he revived his fortunes and his reputation as whiskey royalty.

According to one author, Buchanan, with his brother, Andrew, began their business careers as wholesale grocers.  They moved into distilling about 1870, with George credited with buying and building three major distilleries in Louisville.  They were known as the Anderson Distillery (RD #97), shown above, the Buchanan Distillery (RD #353), and the Nelson Distillery (DR #4), adjacent to each other in Federal taxing district #4.   As noted earlier, the three plants had the capacity for producing whiskey amounts second to none in Kentucky. 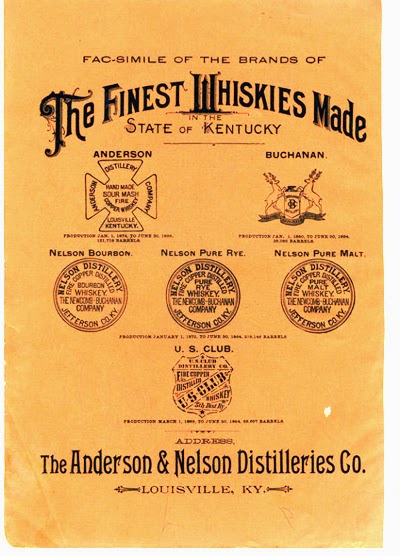 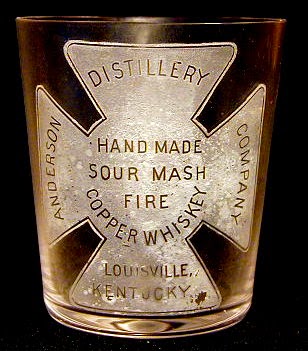 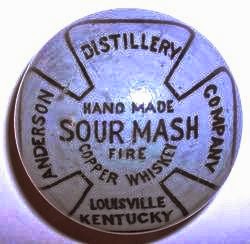 An advertisement linked the three outfits and provided illustrations of their advertising logos.  The Anderson distillery featured a Maltese or Greek cross on much of its materials.  Shown here, for example, are a paperweight and a shot glass both touting Anderson’s handmade sour mash, copper fire whiskey.  These items would have been produced to give away to saloonkeepers and bartenders featuring Anderson’s brands.  The Anderson distillery produced a small-tub, hand-made whiskey that is said to have been light, rich, smooth and fragrant.  The grain was scalded with spent “beer” in small tubs and was left 24 hours before being mashed.  It was then fermented naturally and some liquid was boiled in a copper still and others in a copper vessel directly over the fire.

The Buchanan marketing approach featured more elegant designs.   Buchanan’s Green Label whiskey displayed an elegant script and a wire-covered top.  Equally interesting was a liquor called “Buchanan’s Electro-Ozonized Bourbon” for the lungs.  Taking advantage of newly discovered interest in electricity, this whiskey was advertised as “in the best shape for use when an alcoholic preparation for the LUNGS is needed.”  Nelson Distillery used barrels to announce its products, including brands known as “Coon Hollow” and “Big Spring.”  These were, it claimed, “whiskies of the people.” 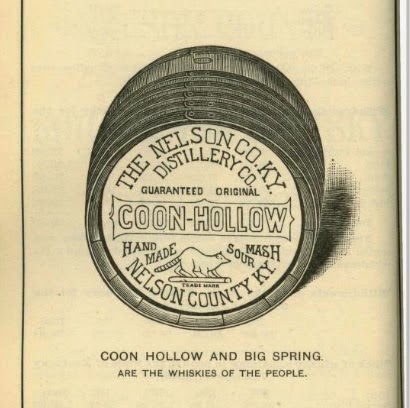 The Buchanan Distillery produced a heavy-bodied, hand-made sour mash whiskey that could be blended but when aged became deeply flavored and had a fragrant bouquet.  The Nelson Distillery produced a mash of 80% rye and 20% malted barley that was labeled as “Nelson’s Pure Rye.”  It also made “Nelson’s Pure Malt,”  composed entirely of barley malt and stored it in both charred and uncharred barrels.  Another featured brand was “U.S. Club,” whiskey that was used for both rye and bourbon blends.  It also marketed what the owners called “a quick maturing whiskey,” aged only three or four months.  A relatively cheap drink, it had a substantial customer base.

The overall company was known initially (1871-1875) as Newcomb, Buchanan & Co.  George Buchanan was president.  In 1876 and 1877, the distillery outfit reorganized with similar management and a slightly altered name.  Along the line the Buchanan built the Greystone Distillery, later known as Elk Run. 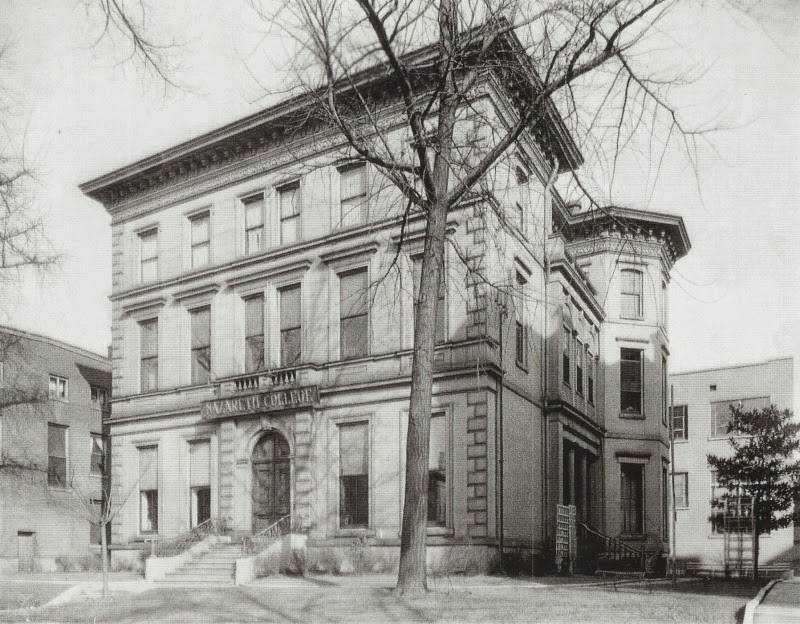 By now a very rich man, Buchanan did as many whiskey royalty and bought a mansion.  It had been designed by Henry Whitestone, one of Louisville’s most noted architects at the time, originally for a man named Tompkins.  In the Italian Renaissance style, as shown here, the structure has a definite institutional look with its flat facade rigidly articulated by a belted look at each floor.  Like many houses in Louisville at the time only the main facade was of limestone, the remainder brick.  It was later used by a school.  However homely the exterior might be,  Buchanan determined to make the interior the height of Victorian extravagance.  A local newspaper contained a description of the still-new decorations at their height:  “Nothing short of the most lavish means could have provided such a bewildering array of blended utility and artistic beauty.”  A photo of the Buchanan parlor and a room beyond attest to the elegance of the place. 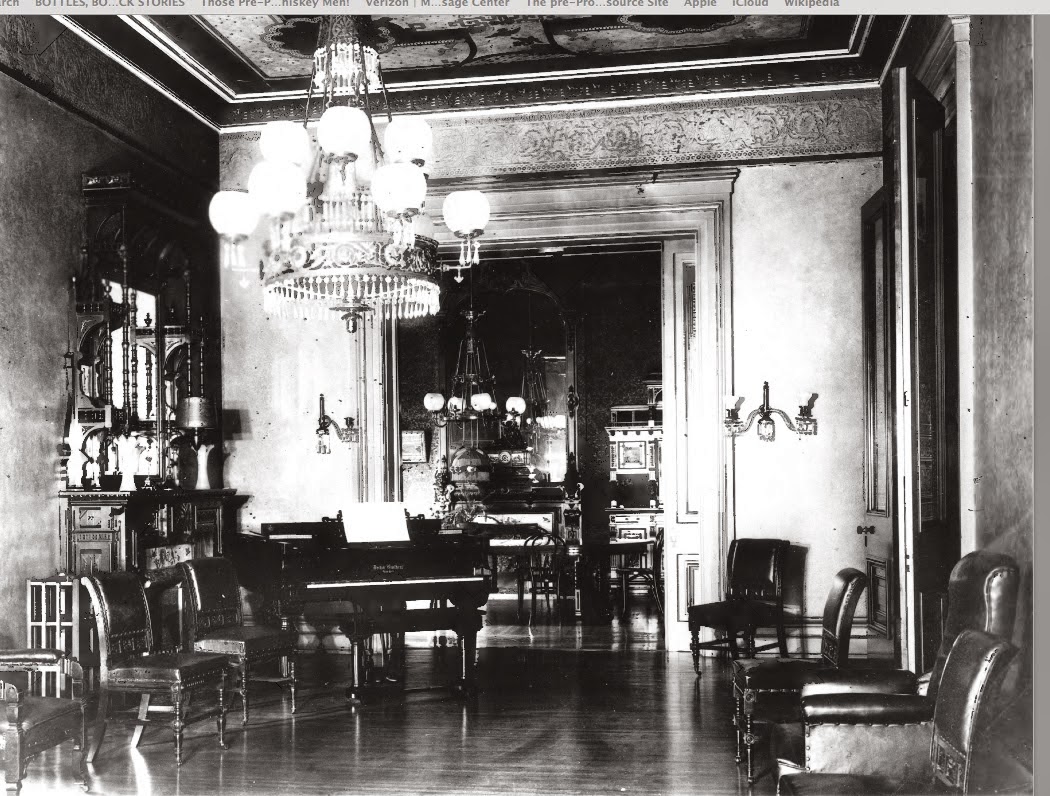 By 1884, however, Buchanan was bankrupt and the Louisville Courier-Journal speculated that he might have been “on the lam.”  The paper called him “a sort of Napoleon of the liquor trade.”  It added:  “All his operations were colossal, and his successes or failures were pitched on the most splendid scale.”  When he had promised earlier to pay his enormous debts, people had believed him.  Now he was bankrupt and missing.  It was whispered to be a case of fraud. But Buchanan’s friends knew where he was and he quickly returned.  He had assets. There were at least 67,000 barrels of whiskey in Buchanan’s warehouses.  Some 3,000 were slated for removal subject to $8,000 tax, equivalent to $375,000 today — an amount the distiller could not raise.  In the end, Buchanan was forced to put his distilleries into bankruptcy.  His mansion and its furnishings went too. 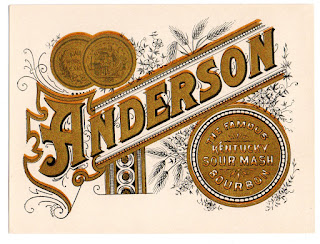 But George was far from finished.  Although his distilleries were reorganized under new ownership, he apparently retained the confidence of whiskey men in Kentucky and throughout America.  He set himself up as a Louisville whiskey broker.  He could, he said, arrange large quantities of whiskey from distillers to wholesalers and retailers, and offered to bottle whiskey for parties under their own labels.  Shown here is an Anderson whiskey issued through a St. Louis outfit that may have been the result of a Buchanan brokering effort.  In his advertising Buchanan said:  “I have close business relations with the owners of a very large percentage of these old whiskies and can execute on the most favorable terms.”  He proved those relationships by issuing a 169-page booklet about Kentucky whiskey that carried ads from many major distillers.  He called it “Fine Whiskey Facts” and gave it a fancy cover.

This publication also gave Buchanan an opportunity to pontificate on Kentucky whiskey:  “A standard Kentucky Whiskey is the best and safest beverage in the world, and especially suited to the American climate in which a stimulant of its specific character is a necessity.”  He ended this screed with a warning to Kentucky distillers and dealers to be “satisfied with a legitimate profit” so as to encourage the “cheapness at which they can be afforded” and thus increase sales.  He also strongly advocated lowering Federal taxes on whiskey. 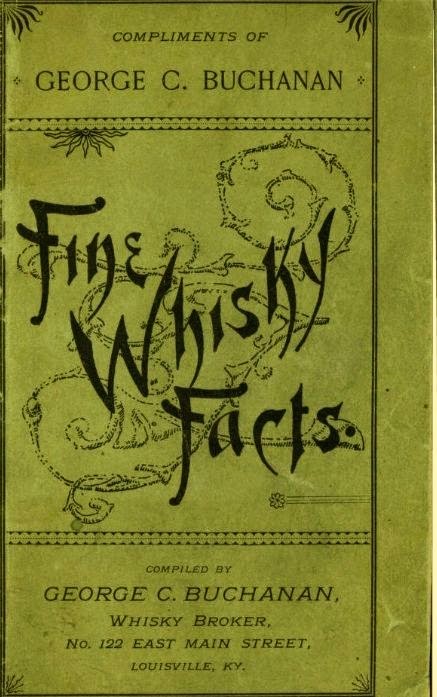 By 1905, Buchanan was firmly back in control of the distilleries he had built and nurtured.  He had established a relationship with the New York City-based Paris, Allen Company, who were attempting to make their own “Trust-like” inroads into the Kentucky whiskey trade.  When Paris, Allen bought the Anderson-Buchanan-Nelson Company, they capitalized it at $2 million and incorporated it in New York State.  They named Buchanan as the president and general manager of the new entity.  The King of Kentucky Whiskey had returned.  A trade paper in reporting the deal opined:  “The Bulletin feels that the stockholders of the new company are to be congratulated on securing the services of Mr. Buchanan in the operation and distribution of the products of these plants;  we also congratulate Mr. Buchanan on having returned to his old first love.”

According to Kentucky tax records, the firm subsequently became known as the Allen-Bradley Distillery and operated under that name until about 1914. The property subsequently was known as the Elk Run Distillery before the entire complex was shut down by National Prohibition.  During the “dry” era the warehouses were under Federal supervision and used to store medicinal alcohol. A flood damaged large steel tanks on the property that broke loose and demolished several warehouses.  All but one of the distilleries then were dismantled, most buildings were razed, and the property became a scrap lot.

By that time George Buchanan had largely disappeared from the public record.  He seems to have eluded the census taker throughout his life. He is, however, worthy of a final word.  His mansion, now part of a university campus, still bears the Buchanan name and is listed on the National Register of Historic Properties.  In the official narrative that accompanies such designations, the Whiskey King is described, quoting one of his contemporaries.  The quote makes a fitting conclusion to Buchanan’s story:  “He was a liberal promoter of public improvements and a generous contributor to charities that administer to the helpless…” [but nevertheless] “…retained a very ample supply of this world’s goods.”