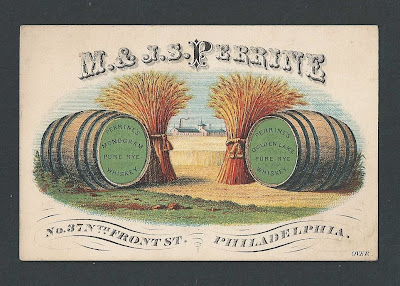 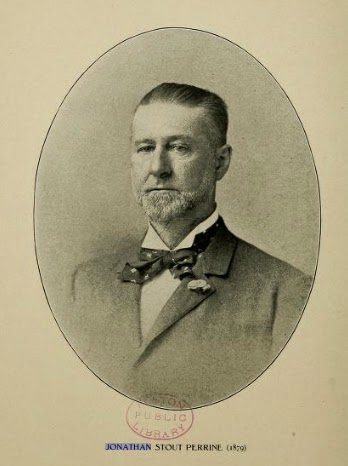 In the 1890 “Blue Book,” the defacto social register of Philadelphia, among the names to be found in that highly selective volume — 25,000 among 1.5 million population — were those of Mr. and Mrs. Jonathan Stout Perrine, living on fashionable Mount Vernon Street.  The entry did not mention that, along with his brother, Mathew, he was one of the city’s most successful liquor dealers.

The Perrines had long been an established American family.   Their founding ancestor, Daniel Perrin, known as “The Hugenot" (French Protestant), had arrived on these shores in 1665, settling in the New York area.   The Perrine brothers had been born in New Jersey.  Their father was Thomas Morford Perrine whose first wife, Elizabeth, was the daughter of General James Cook.  When she died a year later in childbirth,  Thomas married a second time,  Elizabeth Stout, likely a cousin. She was the mother of Mathew, born in 1831, and Jonathan, shown here in maturity, born in 1836.

Because the brothers claimed that the origin of their business was 1845 when both would still have been children, it has been speculated that their father started the liquor business in Philadelphia.  Thomas Perrine, however, was recorded serving many years the as the chief warden of the State Prison in Trenton, New Jersey, and is not known to have left the state.  A more likely explanation is that the Perrine brothers bought an unnamed liquor dealership in Philadelphia that dated back to 1845.  Both brothers were recorded by the 1870 census working in the liquor business. Their company first was listed in business directories in 1871, called “M. & J.S. Perrine” and located at 37 North Front Street. 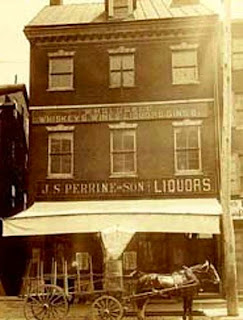 The substantial three story building, shown here,  that housed the liquor dealership indicates that the brothers were “rectifying” whiskey, that is buying it from the many distillers then operating in Pennsylvania, blending and compounding it, and selling under their own labels.  As a result of these activities, the Perrines were able to merchandise a number of brands.  They included “Chemically Pure,” “Palace Club,” “Palace Rye,” “Perrine’s Monogram Pure Rye,” “Perrine’s Old Memorial Whiskey,” “Perrine’s Golden Lake Pure Rye,” and “Perrine’s Pure Barley Malt Whiskey.”  They also featured a line of gins, brandies and products they called “Apple Whiskey and “Apple Ginger.”  With the exception of “Chemically Pure” in 1886, the company does not appear to have trademarked any of its brands.

For retail purposes, M. & J.S. Perrine sold their products in glass.  Shown here is a quart of their Pure Barley Malt Whiskey, with a paper label below a similar fancy embossed label.  Other liquor was presented in square cathedral type dark amber bottles.  Frequently the company name and address was included on the base of a bottle. Particularly attractive was the embossing for Perrine’s Apple Ginger, showing a glowing apple on the front.  This product was advertising with images that harked back to life in the original 13 states. 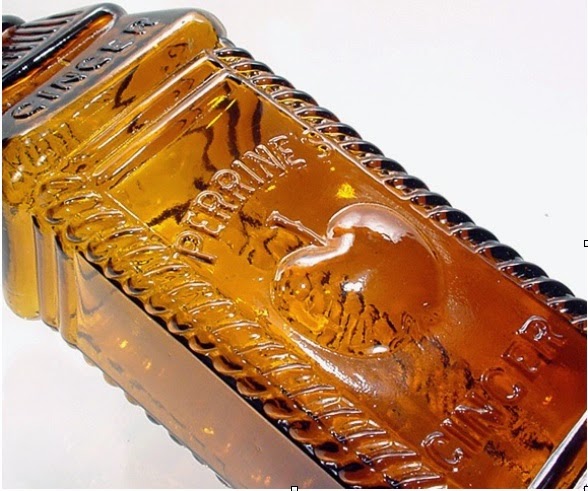 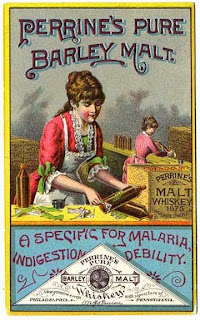 The Perrines marketed their Barley Malt Whiskey as a medicinal, claiming that it was a remedy for “malaria, indigestion and all wasting diseases.”   Since no one at that time knew a thing about malaria, it was a claim unlikely to be challenged.  The brothers advertised it with a colorful trade card with a picture of a winsome young woman filling orders from the apparently ague-striken, and sticking the Perrine label on the bottle. Her comely   presence emphasized the “purity” of the product.  Unlike the many malaria cures that contained   opium, the Perrines’ nostrum only provided substantial swallows of alcohol. 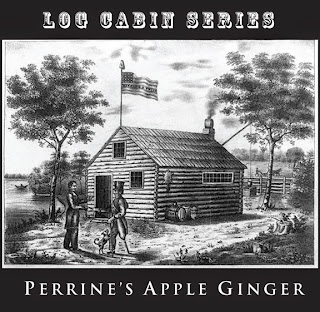 With their vigorous marketing and apparently quality liquors,  the Perrines flourished, opening a second retail outlet at 238 North Water Street.  Meanwhile Jonathan was having a personal life.  About 1862 he had married Anna M., who also had been born in New Jersey.  The 1870 census found them living in Ward 14 of Philadelphia.  With them were their two sons, Edmund, age 7, and, William, age 4.  Also in residence was Jonathan’s 40-year-old brother and partner, Mathew.  In addition to Jonathan’s photo  above, we have a description of him taken from his 1890 application for a passport.  It disclosed that this Perrine was six feet, three-quarters inch tall, had blue gray eyes, light brown hair and a “pointed” chin.

The brothers operated their liquor business with growing success throughout the latter part of the 1800s.  As his sons matured, Jonathan took William into the business.  Edmund, however, was destined to become a medical doctor of considerable reputation in the Philadelphia area. About 1894, Mathew, now age 63 and possibly in bad health, withdrew from the firm.  The following year the name of the firm was changed to J. S. Perrine & Son Company.  William, age 30, now was a full-fledged partner in the business.

During this period, the Perrines were active in the fight against the Whiskey Trust, formally known as the Distillers and Cattle Feeders Company.  In 1892, Jonathan was a leader in organizing a meeting of prominent wholesale liquor dealers in Eastern cities, said to represent $6 million ($150 million today) in assets.  Their purpose was to organize an association for their own protection against the Trust which was viewed as “stretching out its influence all over the land….”   Most of these anti-Trust Eastern liquor dealers would have been “rectifiers” like the Perrines, blending and compounding whiskey bought from distillers.  The Trust was known to seek a distilling monopoly and then hike prices steeply to rectifiers.  The new association was described as seeking to “free its members from the exactions….” of the monopoly.   Perrine was elected treasurer.   Faced with similar organized opposition in New York State, Kentucky and elsewhere, the threat from the Illinois-based Trust eventually dissipated.

Meanwhile, the Jonathan Perrines had achieved “Blue Book” status.  While that publication disclaimed “to pass upon the social standing of the parties embodied within its pages,” the implication was clear.  Being in the Blue Book made one a Mainline Blue Blood.  The book recommended itself to “wives and daughters at home” (i.e. about marriage eligible men) and “the commercial and professionally community in their offices and counting-rooms, (i.e., about doing business).  Wealth, even from whiskey, went a long way to gaining social status. 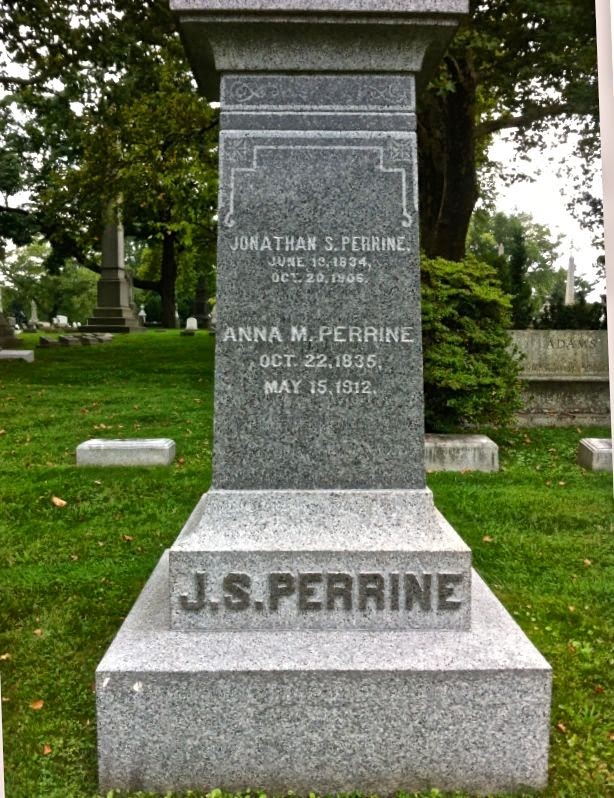 Jonathan Perrine died in October, 1906, at age 72, while in Moorestown, Pennsylvania.  He left an estate to his wife, Anna, and his sons said to be worth $135,000 ($3.375 million today).  He was buried in West Laurel Hill Cemetery in suburban Bala Cynwyd, Pennsylvania.  He would be joined in death by Anna six years later. The couple’s gravestone is shown here.  Lying nearby is Jonathan’s brother and partner, Mathew Perrine, who had died in 1898.  Meanwhile, William was guiding the fortunes of the Perrine enterprise which moved at least twice during his management.  Records indicate that William died in 1914, but the business continued on until 1818, apparently run by other family members.  The last address was 62 North Front Street.

Posted by Jack Sullivan at 5:09 PM