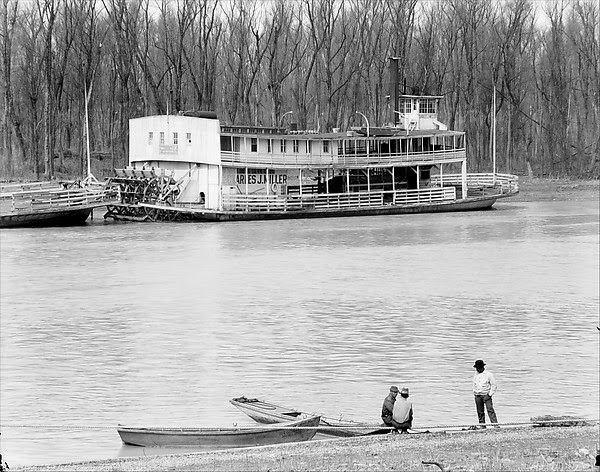 Older folks may remember “Mississippi Mud,” a very popular song from the 1920s and ‘30s.  For Charles Miller of Vicksburg, the lyrics would have had a special meaning.  He knew Mississippi mud intimately, both as the owner of a fleet of river boats, including the one shown above, and as a dealer in whiskey whose jugs were fashioned from Mississippi clay.

Miller’s acquaintance with Mississippi mud was lifelong.  He was born in Vicksburg in 1861 of German immigrant parents and although too young to remember the Civil War siege of the town, grew up along the banks of the great river. He was educated in the schools of Vicksburg and at an early age entered into the local workforce.

Miller married in 1883. His bride was Josephine Moguin (sometimes given as McGuin), who had been born in Illinois.  According to the Mississippi Marriage Book, they were wed, with the Rev. H. A. Pichart presiding, in St. Paul’s Catholic Church.  Both were 22 years old.  They would have two children, George W. and Alice.  Miller’s obituary described him as “quiet and unassuming” and “a kind husband, a loving father.…” 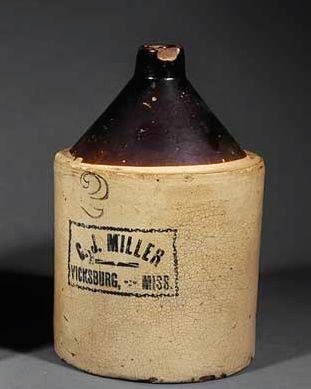 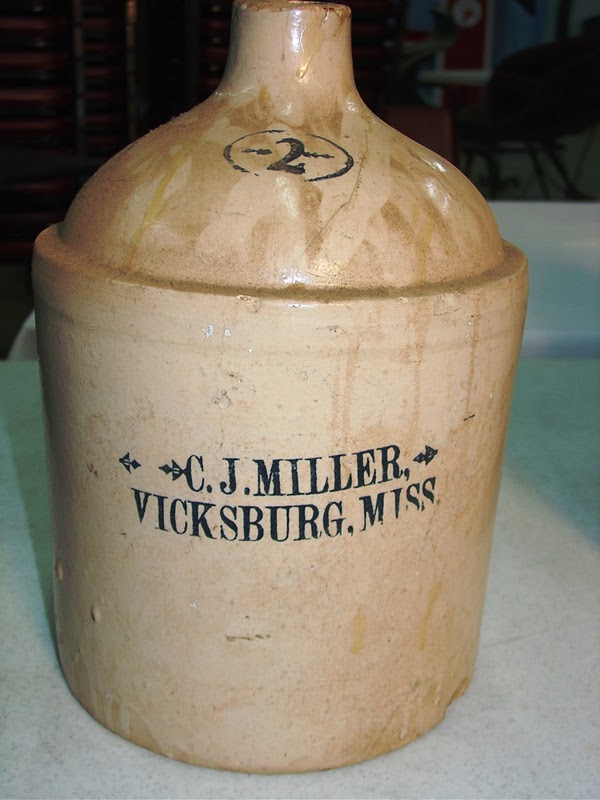 At the time of his marriage Charles was working for other people, presumably in the mercantile trades.  About four years after his marriage,  having accumulated sufficient resources, he ventured out on his own in 1887, creating the C. J. Miller Company and began selling liquor.  It was a smart move.  In the period from 1880 to 1910, Vicksburg experienced tremendous growth. As one history puts it:  “It was the heyday of the steamboat, the completion of railroad construction, and the establishment of a comprehensive local streetcar system.”  The town was booming.

His local customers could reach Miller’s store by rail and he could ship his whiskey both west across the Mississippi and east by railroad as well as up and down river and tributaries by boat.  The 1900 census found him and his family living in the Second Ward of Vicksburg, his occupation given as a liquor dealer.

Miller’s success can be measured by the plethora of whiskey jugs bearing his name. They were fashioned out of Mississippi mud, soil that contained clay elements suited for manufacturing salt-glazed stoneware. Vicksburg boasted several potteries.  Miller apparently liked variety in his containers.  Shown here are seven different whiskey jugs he produced.  Most are covered with cream Bristol glaze, with an occasion example bearing a brown Albany slip top.  Some have his label printed over the glaze, some under.  Miller must have fancied bailed handled jugs, as shown in three examples here. 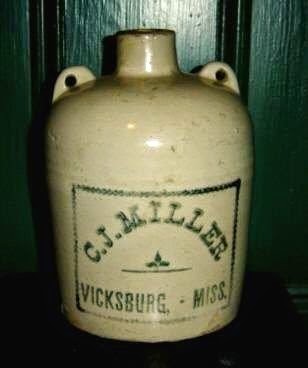 Whiskey proved to be very profitable.  About 1900 Miller was able to move his family to a large home in a fashionable neighborhood at 2300 Drummond Street.  The house, shown below, is on the National Register of Historic Places in Vicksburg as a classic Queen Anne style structure.  The the house, shown here, is a two story frame building with a steeply hipped roof with lower gables and a tower placed at the side of the front facade.  The porch is two-tiered with considerable decorated detailing.

The Miller home became a excellent residence for the couple’s expanding community involvement.  Both Charles and Josephine were devout members of St. Paul’s Church, where they had been married.  Miller also was a member of the Vicksburg Lodge 95 of the Benevolent Protective Order of Elks and cultivated many friendships through active participation in the Goose Lake Hunting Club. 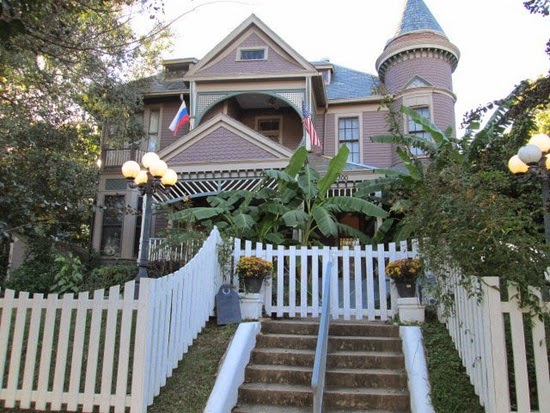 Miller’s prosperity was also helping him finance other investments.  He bought some rich Mississippi bottom land around an area known as Spanish Fort south of Vicksburg and operated large a plantation there.  He also helped establish a Vicksburg bank called the American Bank & Trust Company and became a director. With the advent of motorized transport, Charles founded and was president of the Miller-Guchereau (his son-in-law) Motor Truck Company. Miller’s principal interest, however, was in plying the “Big Muddy” as the owner of the Mississippi River Ferry Company. 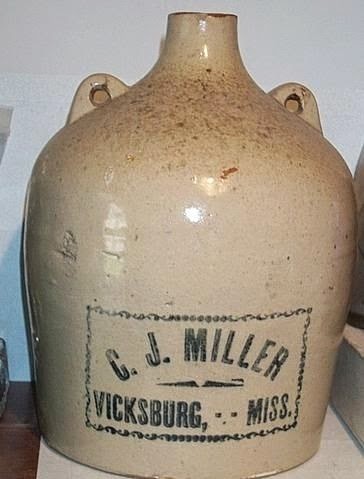 The importance of these outside businesses was made clear in 1907, when  the State of Mississippi voted dry — no alcohol could be sold in the state.  State prohibition may not have immediately caused Miller to shut down.  Neighboring Louisiana was still very, very “wet” and there was no obstacle to sending whiskey over the river.  Moreover, the availability of rail and water transport meant that Charles could ship his products to other states, even dry ones, since interstate traffic in liquor was not banned until 1913.  In the 1910 census, Miller still listed his occupation as owner of a wholesale liquor house. 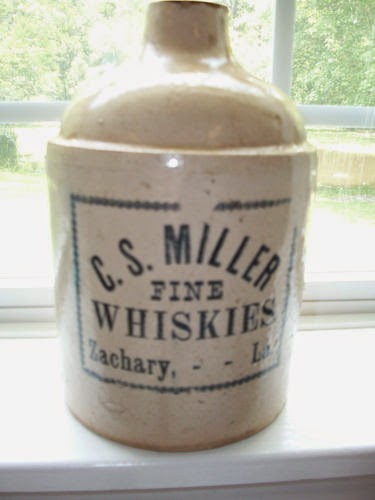 As the prohibition noose tightened over the next few years, however, Miller was forced to shut the doors on his liquor enterprise.  Because neighboring Louisiana was still "wet," from the jug left it is clear he opened a liquor enterprise in Zachary, a small town not far from Baton Rouge. With the advent of National Prohibition in the 1920 census he gave his occupation as "steamboat owner."  At that time he was operating a fleet of boats out of Vicksburg, principally running up into tributaries of the Mississippi, including the Yazoo and Sunflower Rivers — both famous for the mud they carried into the Mississippi.   One of his ferries, seen at the top of this post, he named for himself: “The Charles J. Miller.” That picture, by the way, was taken by the famous WPA photographer Walker Evans.  Another boat was named for his son, George W. Miller.

In February 1926 Charles Miller died in his home at the age of 65.  According to his obituary in the Vicksburg Evening Post, “The end came peacefully…after a prolonged illness, during which time everything known to medical science was done in order that the life of this good man might be spared.” His funeral was held at St. Paul’s Church with his wife, children and two brothers mourning by the casket.  Pallbearers included many of Vicksburg’s leading citizens.  Miller was interred in Vicksburg’s Cedar Grove Cemetery. 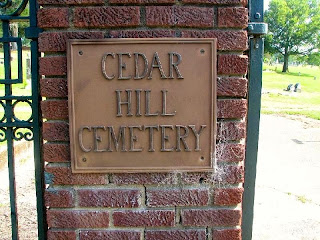 A final word on this Mississippi whiskey man was written in the Vicksburg Evening Post obituary. It opined:  “Mr. Miller stood at all times for what was right and just, and was always willing to cooperate and do his part in any undertaking that was for the betterment and advancement of Vicksburg.”  To which I would add:  “This would include making the most out of Mississippi mud.”

Note:  Much of the information for this post was obtained from a short article by Bobbie Beyers Ferguson that appeared in the Winter 2007 issue of Mississippi River Routes, the quarterly journal of the Vicksburg Genealogical Society.  Ms. Ferguson replicated in full the local newspaper obituary of Charles Miller.  The photos were derived from a variety of other sources.