The Bernheim Brothers and the Origins of I. W. Harper Whiskey 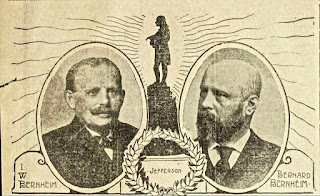 At the doorway of  Schenley Industries Distillery in Louisville, Kentucky, is an elegant bronze  plaque flanked by a sign reading:

“Bernheim Distilling Company
—as tribute to a man and his family who pioneered
the whiskey industry in America.”

Isaac Wolfe Bernheim, a German-Jewish immigrant, arrived in the United States soon after the Civil War with only four dollars in his pocket. He is shown below as a youth and in his elder years.  By founding a whiskey business, Bernheim had “realized the American dream” by the time of his death fifty five years later, making millions and giving his adopted country one of its best known brands of whiskey:  “I. W. Harper.”

Bernheim was born in Schmieheim, Baden-Wurttenberg, Germany, in 1848, the son of Leon and Fanny (Dreyfuss) Bernheim.  His father was a merchant.  At the age of 19, he emigrated to the U.S., arriving in New York in April of 1867.   Following a family tradition, Bernheim first worked as a peddler, selling clothing from a horse drawn cart, traveling around Pennsylvania.  He ultimately settled in Paducah, Kentucky, where he worked as a bookkeeper and later a salesman for a liquor wholesale firm.  His salary of $40 a month allowed him save enough to bring his younger brother, Bernard to America in 1870.

Two years later the pair opened their own whiskey wholesale business in Paducah, calling it Bernheim Bros.  They put their life savings, said to be $1,200, to help fund the start-up.  N. M . Uri, Bernheim’s brother-in-law, joined in 1875, and the name of the firm was changed to Bernheim Bros. and Uri.  At that point the partners in the wholesale liquor trade and like many wholesalers, mixing and blending raw whiskeys to achieve a particular taste.  In 1879, Bernheim Bros. took the step that would bring fame to their name:  They registered the “I. W. Harper” name.

As widely recognized, the “I. W.” was derived from Isaac Wolfe’s own name. But there is no consensus on how the partners happened on the “Harper.”  Some think it was derived from Harper’s Ferry, West Virginia.  Others believe it was taken from F. B. Harper, the surname of a famous Kentucky horse breeder.  Still others believe it was “borrowed” from the Harper & Delaney Distillery located near Paducah.  In any case, it is agreed that Isaac wanted a American sounding name for his flagship brand. 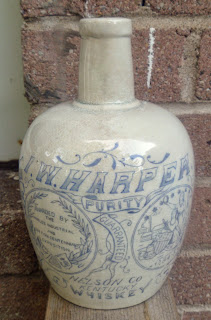 The Bernheims were among the first distillers to see the advertising advantages of winning medals at World’s Fairs and other international expositions.  In many such event just showing up with a display was enough to insure a medal.  Their first medal for I. W. Harper came in 1885 at the World’s Industrial and Cotton Exposition in New Orleans.  They issued a ceramic whiskey container to mark the occasion.  Many other such recognitions would follow.

In 1888, the Bernheims and Uri moved their firm to Louisville, likely in order to be closer to the center of Kentucky distilling and to insure themselves of a steady flow of product for their blends.  In order better to secure that supply the company in 1890 acquired an interest in the Pleasure Ridge Park Distillery, seven miles southwest of Louisville, a facility that had been founded in the 1870s by F. G. Paine.  Initially this distillery had a relatively small output, producing only about 500 barrels of whiskey a year.  In June 1891 N. M. Uri, left the partnership and began his own successful liquor wholesale house.  (See my post of August 2, 2012 on Uri.)  The company name reverted back to Bernheim Bros. Co.

The Bernheims continued to buy out the original owners and by 1896 had acquired full ownership of the distillery and were producing I. W. Harper and other house brands there.  Isaac was president of the corporation.  That same year, however, the Pleasure Ridge Park Distillery was destroyed by fire, leaving the firm with  $1 million tax bill on the bonded whiskey that had been stored in its warehouses.  The result was 18 months of litigation until the government dropped its claim. 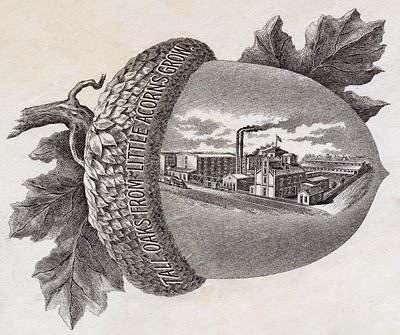 Rather than rebuild Pleasure Ridge Park, the Bernheims sold the property and built their own distillery in the town of Shively, just south of Louisville on Bernheim Lane and the Illinois Pike.  Known to the Feds as Registered Distillery #9 in the Fifth District of Kentucky, it had mashing capacity of 600 bushels a day and warehouse capacity for 61,000 barrels.  The plant is shown above on an illustration inside an acorn, a familiar symbol for the Bernheims.  Around the nut is the inscription:  “Tall Oaks from Little Acorns Grow.”  The motto suggests how far Isaac and his brother had come in their trade.

By placing ads for their whiskeys in national publications and using other advertising devices, the Bernheims captured a nationwide clientele for I. W. Harper and other brands.  They made particular use of colorful chromolithographed trade cards, some with patriotic themes, some with risqué implications.  To a degree virtually unheard of in the liquor trade, Isaac and his brother also emphasized the use of giveaway items.  They included wall signs, some on reverse painted glass, others on vitrolite;  back of the bar bottles, often with deeply etched gold lettering; shot glasses,  and bar side tea kettles.  Of the kettles, the numbers and variety provide enough for an entire post (See my bottlesboozeandbackstories.blogspot.com for June 23, 2012.)  In total the Bernheims left present day collectors a treasure trove of artifacts. 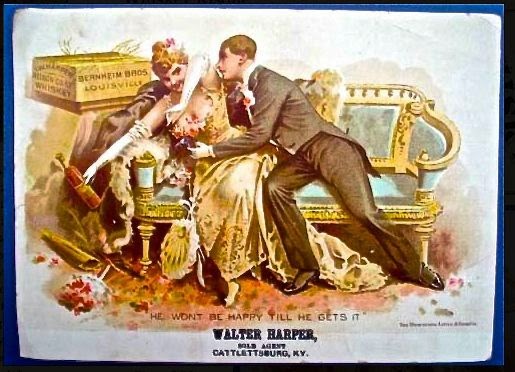 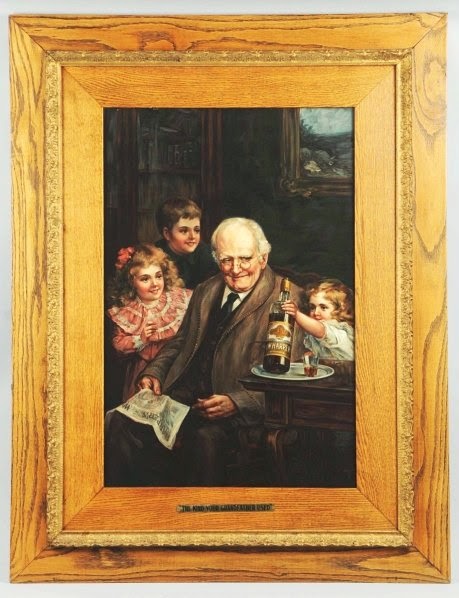 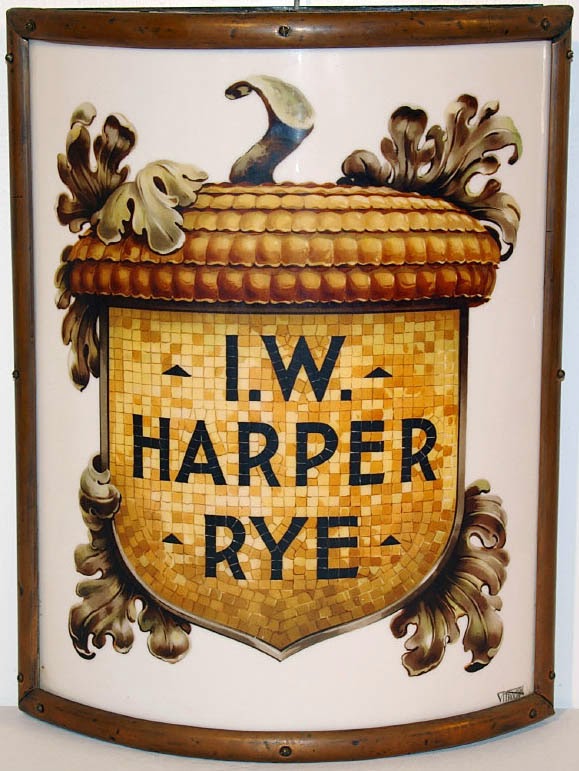 Indicating how tall that tall oak had grown, in 1903 the company incorporated as Bernheim Distilling Co. with $2 million in capital (equivalent to $50 million today).  They continued their expansion in 1906 buying the smaller Warwick Distillery (RD #1, 8th Dist. of KY), located on Silver Creek and Lancaster Pike in Madison County.  It is recorded with an original mashing capacity of 300 bushels a day and storage for 400 barrels.  Under the Bernheims the mashing capacity doubled and the warehouses expanded to hold 9,200 barrels.  The brothers eventually also held ownership in the Mayfield Distillery (RD #229, 5th Dist. of KY), in Larue County.  It could mash 700 bushel of grain a day and warehouse 37,000 barrels.  The Bernheims were being well supplied with product. 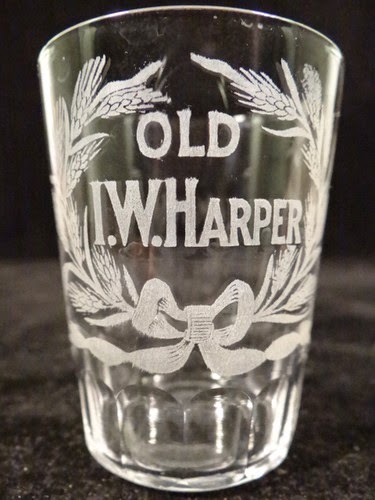 During this period the brothers were also getting a reputation for their philanthropy.  In 1901 they gave the city of Louisville a statue of Thomas Jefferson that now stands in front of the Jefferson County Courthouse.  It cost them $60,000 ($1.5 million today).  Recalling their heritage they gave generously to Jewish causes, including the Louisville’s Jewish Hospital and the Y.M.H.A.  But they show similar generosity to the Little Sisters of the Poor, the German Protestant Altenheim, and the Colored Orphans Home.  Their greatest gift, for which they continue to be remembered, was the donation of 14,000 acres of parkland in Bullitt County, Kentucky.  It is known today as Bernheim Forest. 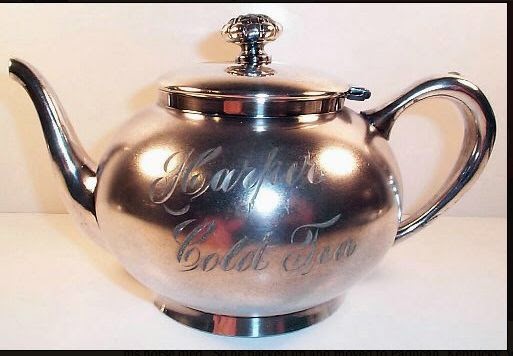 By 1909 the Bernheims largely had divested themselves of their distilleries, selling both the Bernheim and the Warwick plants to an organization of local businessmen called the United American Company.  In 1911 the Bernheim Bros. Shively distillery burned but was rebuilt, expanding the mashing capacity to 1,600 bushels per day.  In 1915 Isaac Bernheim at the age of 67 retired from business, eventually moving to California.  Bernard died in 1925 and was buried in Louisville’s Temple Cemetery, a tall statue marking his grave.  Isaac lived until he was 95, dying in Santa Monica.  His body originally was interred at Cave Hill Cemetery in Louisville but moved in 1956 to Bernheim Forest where an elaborate memorial, shown below, marks his grave and that of his wife. 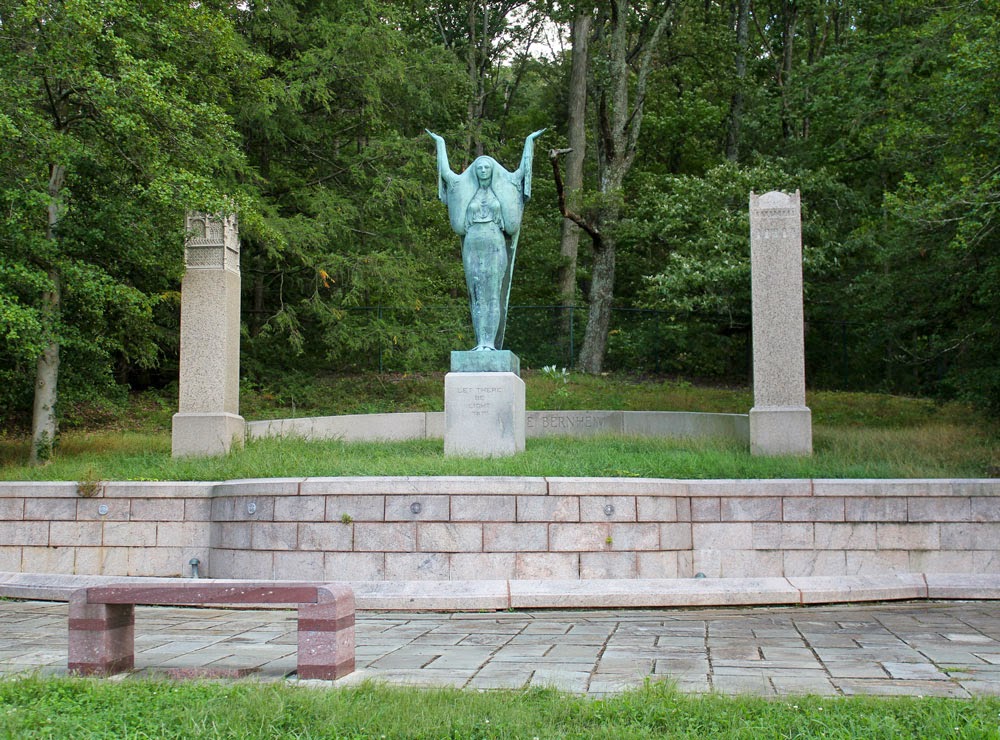 Both men saw the coming of National Prohibition when both the Bernheim Bros. and Warwick plants were partially dismounted and the property sold.  But Bernheim Distilling Co., under its new owners, operated as a medicinal whiskey distributor.  In 1934 with Repeal, the Canadian Schenley Co. purchased the I.W. Harper brand, ultimately becoming the property of the present-day United Distillers.  As a result, the I. W. Harper brand still beckons from the liquor store shelf to the whiskey buyer.  But only, I am told, in foreign markets.