The Krogmans of Tell City: Whiskey and "Circumstances" 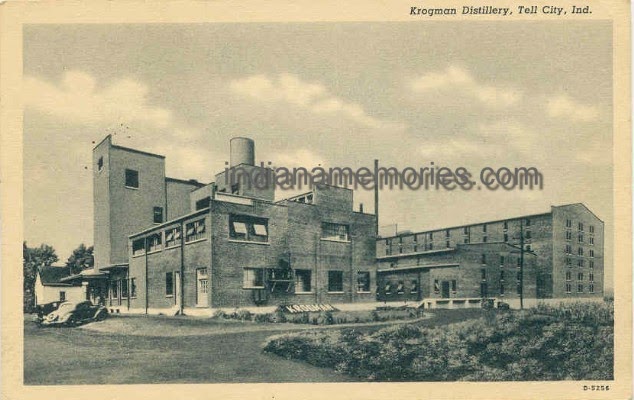 Exactly what circumstances impelled August Krogman to leave his native Schleswig-Holstein, now part of Germany, to settle in a small Ohio River town in Indiana and start making whiskey, we do not know.  But from press accounts we do know the circumstances that drove the future of the Krogman Distillery and August’s son, William.  Those included murder, blood money, conspiracy and robbery.

August was born in December 1821, the son of Johann and Margarethe Krogman.  He learned the distilling business in his homeland, probably helping  make the popular liquor the Germans call “schnapps.”  He emigrated to the United States in 1855 and worked in a brewery in Davenport, Iowa, for three years.  It was there he met and married his wife, Dora Schubert.  They would have two children, Emma born in 1859 and William in 1863.

In 1858 Krogman moved to Perry County, Indiana, working for a few years in the coal mines there.  By 1862 he had settled in Tell City, Indiana.  With a partner and a financial stake of $5,000, in 1863 Krogman constructed and opened a plant for “manufacture of bourbon, whiskey, and apple and peach brandies.”  His distillery is shown above in a postcard view.

Krogman had selected well in choosing his state and city of location.  Indiana reputedly had only one other working distillery and there was an active demand for whiskey.  Tell City, shown above as it looked in the mid 1800s, had its origins in a group of Swiss-German immigrants who had come together to purchase the site in the Midwest.  The tract of land they found was in southern Indiana, on the navigable Ohio River and strategically located on a railroad line.   Krogman had easy shipping access for his products to other cities and states. Those shipments of whiskey most often were made in ceramic jugs.  They came in a variety of sizes and formats.  The one at right was stenciled over a salt glazed jug.  Despite the “s” in distiller being reversed, it recently sold for $1,100 at auction.  Other Krogman jugs included a Albany slip brown body with a reverse stenciled name, a Bristol glaze jug with cobalt label, an even larger label on a two-toned jug, and a quart-sized container with “Krogman Whiskey” in a circle.

As August aged, he brought his son into the management of his thriving whiskey business. William Krogman had received considerable education for the times, attending both elementary and secondary schools in Tell City and then spending some period at the University of Indiana in Bloomington.  In 1888, he had married Claudine Voelke, the daughter of Frederick Voelke Jr., well-known owner of the Tell City Brewery.  Their union produced two children.

At age 79 in 1900, however, the father was still giving his occupation to the census taker as “distiller.”  The year before, after more than 40 years of marriage, his wife Dora had died.  August followed her to the grave in October 1905, age 84.  By that time William Krogman was well prepared to keep the Tell City distillery in operation — but he likely was unprepared for the circumstances that were to befall him. 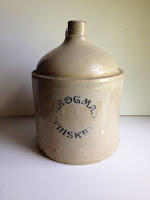 In 1911 a Tell City man named Joseph Wiegand was feuding with his neighbors next door, the Drury family.  According to press accounts, the problem was “some little difference about chickens.”  Mrs. Drury was standing in the yard of her home one day when Wiegand came around the corner of the house and shot her dead. Convicted of murder, Wiegand, apparently because of advanced age, escaped the gallows and was given a prison sentence.  Left with five minor children and no one to care for them, the bereaved husband sued William Krogman, characterized as a “wealthy man,” for $10,000 in damages (equivalent to $250,000 today).  Drury charged that his wife’s slayer had been drunk on liquor sold him by Krogman.
After legal maneuverings that lasted almost two years, a jury awarded Drury $2,500 in “blood money.”  He rejected that result and filed for a new trial, this time  suing in the name of his motherless children.  On this second time around, after a venue change to an Indiana county where Mrs. Drury had once resided, a sympathetic jury increased the award to $7,000.  A local newspaper headline read:  “Heavy Judgment Rendered Against William Krogman.” 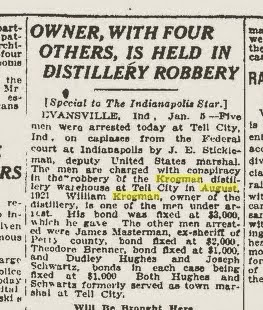 Unfortunately,  William’s problems were just beginning.  As “dry” forces closed in on the production and sale of alcohol, Krogman’s markets slowly dried up along with profits.  Finally, in 1920 the advent of National Prohibition caused the distillery his father had founded 57 years earlier to shut down completely.  Sealed by federal order, the Krogman warehouses were full of aging whiskey  The temptation proved to be too strong for William.  With four others, including two former Tell City town marshals and an ex-sheriff of Perry County, he hatched a plot to rob the Krogman Distillery warehouse in August 1921.  And got caught by federal authorities.  This time the headline read:  “Owner, with Four Others, is Held in Distillery Robbery.”

Arrested and hauled into Federal Court in Indianapolis, William and his four accomplices were charged with conspiracy.  As the presumed ringleader, Krogman’s bail was set at $3,000.  The others paid lesser amounts.  I am unable to find the outcome of the arrests, but in many cases such offenses were treated leniently even by the U.S. courts and the perpetrators let off with fines.  The rationale could reasonably have been that Krogman was only trying to purloin liquor that actually was his.   William continued to own the Krogman properties for some years but never saw the Repeal of the 18th Amendment.  He died in 1932 at age 68 and is buried in a Perry County cemetery. 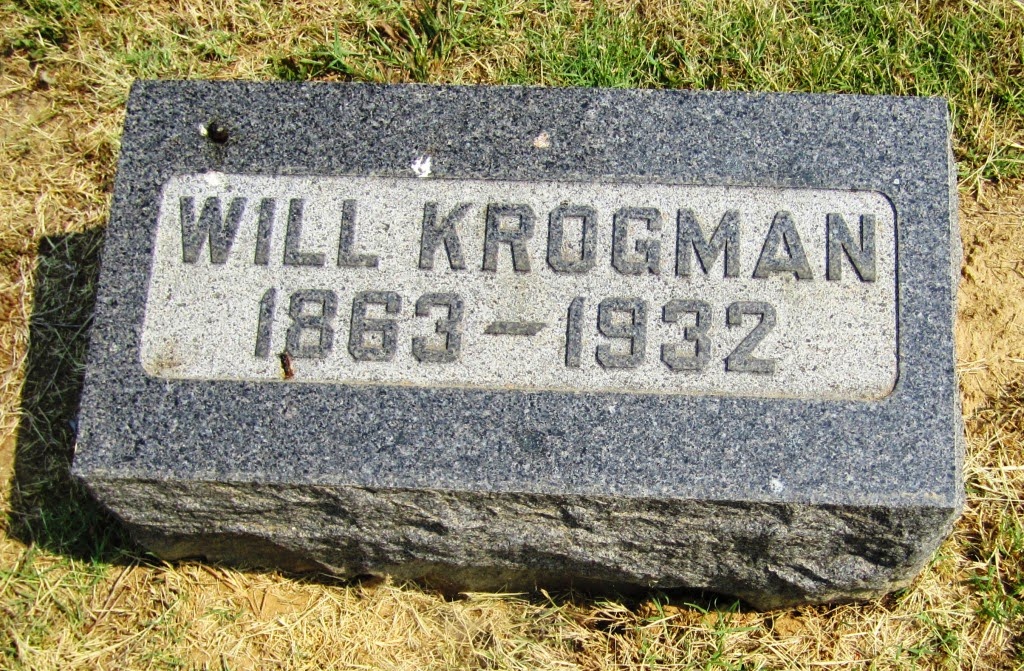 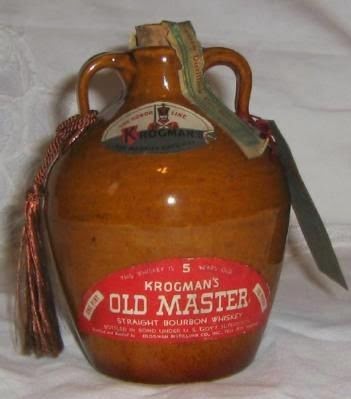 The Krogman Distillery is recorded on a bank draft as having passed after Prohibition into the hands of the Gerbers, father and son Tell City merchants. In 1941 the Park & Tilford Co. bought the plant.  As testimony to the recognized quality of Krogman whiskey, that company issued a straight bourbon it called “Krogman’s Old Master” and packaged some of it in a fancy ceramic jug, shown here, attributed to the Uhl Pottery Company.  The plant operated into the 1960s when it was closed forever.

This final termination came almost a century after the distillery had been founded by August Krogman.  It had made him and his son rich and well-known in Tell City.  With the exception of certain "circumstances” whiskey-making had been good for both Krogmans.

Special Note:  This post marks the 300th entry since the Pre-Prohibition Whiskey Men blog began in April 2011.  In the months since the 200th post, it has been possible to reduce to just two — Maine and North Dakota — the states where I have been unable to identify a whiskey man to profile.  Moreover, among the last hundred vignettes two women, Mary Dowling and Mary Jane Blair, have been featured.  Their achievements in the liquor trade definitely marked them as worthy of attention.

Interest in whiskey has grown rapidly in recent years, as has attention to whiskey lore.  The prior posts have allowed me to shine some light on pre-Prohibition whiskey making and merchandising, a little-examined part of American business, social and political history.  It is gratifying that over the past few months several media outlets, history museums, historical publications and freelance writers have been in touch with me for information and other assistance. I am happy to give it.  Also gratifying are the 55 “followers” who have signed up for this blog, another indication of growing public awareness. My ongoing research into the subject allows me to be confident that sufficiently interesting other pre-Prohibition American whiskey men (and women) existed who are worthy to be subjects of vignettes.  My goal is to have profiled one hundred more by sometime in 2016.