Freiberg & Workum Were “The Biggest Fish in a Very Large Pond” 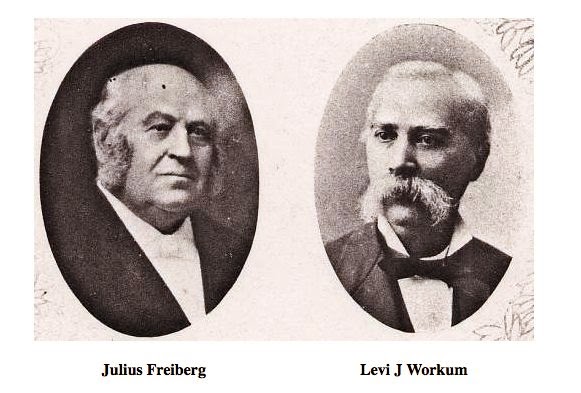 In the six decades before National Prohibition,  Cincinnati, the self-styled “Queen City,” was the center of America’s whiskey trade.  The Ohio River town boasted hundreds of distilleries, whiskey “rectifiers,”  wholesale and retail liquor dealers, brokers and more than 2,000 saloons.  As many as 40,000 Cincinnatians were engaged in the alcoholic beverage industry.  The industry there paid in taxes one-sixth of the entire internal revenue of the United States.  At the pinnacle of this soaring commerce sat brothers-in-law, Julius Freiberg and Levi J. Workum.

The clear driving force of the pair was Freiberg, born in Neu Leiningen, Germany, in 1823.  At the age of 24, he immigrated to the United States in 1847, settling first in Williamstown, Kentucky, where he ran a general store for several years.  In those days liquor was a staple of such enterprises and Freiberg soon became acquainted with leading Kentucky distillers and their products.  After a few months, he decided that the future lay in selling whiskey not whisk broom and 1852 he moved to Cincinnati.  There he initially was a whiskey broker, credited with bringing the first commercial quantities of bourbon out of Kentucky.  In 1855 he partnered with his future brother-in-law, Levi Workum, to establish a wholesale liquor business.  A year later he married “Duffie” Workum, reputed to be the first Jewish child born west of the Allegheny Mountains.  Two years later their first son, J. (Jacob) Walter Freiberg, was born. 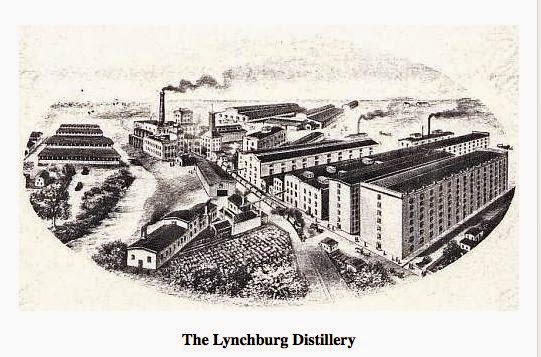 The first location for Freiberg & Workum was a small store at 20 Sycamore Street,  where the company remained until 1858 when larger quarters were required and the partners moved across the street to 13-15 Sycamore.  Like many wholesalers, the partners were looking for an assured supply of whiskey for their liquor dealership and in 1857, after a brief time in business, they bought a newly completed distillery in Lynchburg, Highland County, Ohio.  Their first label was “J. A. Bowen Whiskey,” named for the builder. 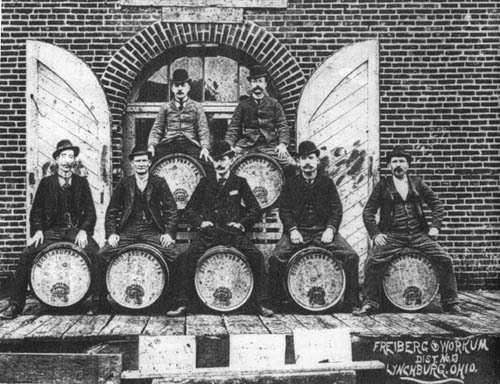 At the outset the Lynchburg Distillery was small, capable of mashing only 100 bushels a day, but over ensuing decades, as shown above, it was expanded to a capacity of 3,000 bushels a day, with a storage capacity of more than 100,000 barrels.  Seen sitting on a few are some of their distillery employees.  As their distillery expanded, Freiberg & Workum introduced new brands, including “Lynchburg Rye,” “Lynchburg Extra Fine Whiskey,” “Highland Pure Rye,” and later, “Clinton Whiskey.”  The company advertised all these labels vigorously, including full page ads in national publications.

Freiberg & Workum became so successful that in 1867 the company purchased the Boone County Distillery at Petersburg, Kentucky.  Located on the Ohio River not far from Cincinnati, this was a huge facility boasting a mashing capacity of 4,000 bushels per day and storage for 60,000 barrels.  As early as 1860 the distillery is reputed to have produced an amazing 1.125 million gallons of whiskey. 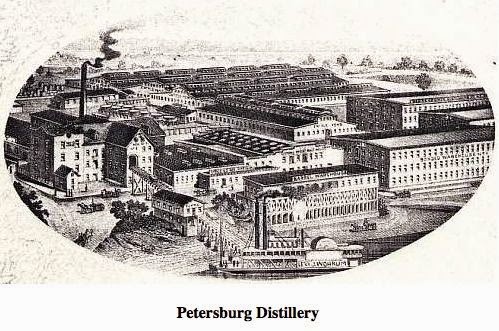 Author Michael E. Becher, commenting on this purchase, has described its impact: “…Freiberg and Workum were the biggest fish in a very large pond.  By 1880, the Petersburg distillery was making more whiskey than any other distillery in the state of Kentucky.  That year, the distillery was worth $250,000 ($6.25 million today) and produced 975,820 gallons of whisky.  By comparison, the nine distilleries in famed Bourbon County produced only 433,263 gallons of whiskey.  By 1987 the Petersburg Distilleries annual capacity had ballooned to 4 million gallons.” 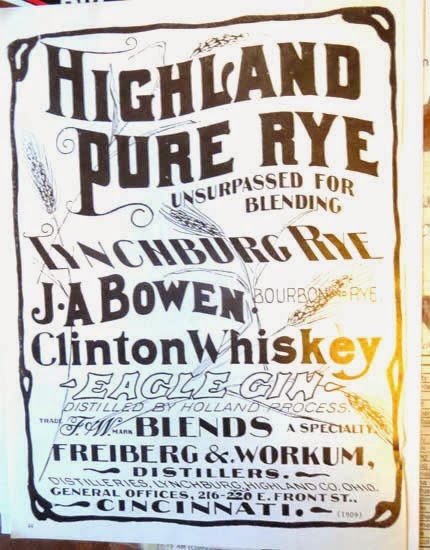 In 1869, again needing more space for their burgeoning trade, the firm’s office and store was moved  to 28-30 Main Street where it remained for 27 years.   Meanwhile, important corporate changes were taking place.  After Levi Workum died in July 1883, Julius Freiberg reorganized the firm.  He took as directors his two sons, J. Walter and Maurice J. Freiberg, as well as Levi’s two sons, Jephtha L. and Ezekiel L. Workum.

Julius Workum also was making a name for himself in political, and religious activities in Cincinnati.  In 1873, for example, he was selected as one of the city’s representatives to the Ohio Constitutional Convention.  He also was active in Jewish affairs, serving as president of the Bene Israel (Orthodox) congregation for 25 years.  He also was active with Reform movements, working with Rabbi Wise when he founded the Union of American Hebrew Congregations (UAHC) in 1873 and the Hebrew Union College two years later.  Julius served as an officer of the UAHC and its president from 1889 to 1903. He helped found and support a number of Jewish charitable organizations. 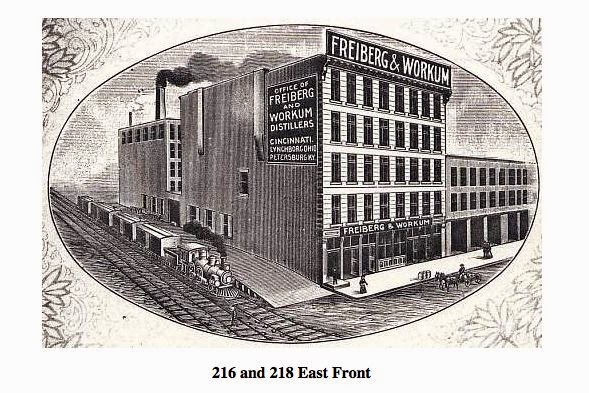 In 1895 Freiberg & Workum made its final office move to 216-218 East Front Street.  This was a large building with a 52-foot frontage, running 200 feet deep and five stories high.  As shown on the illustration here, it had a private siding for  loading and unloading freight cars.  The complex had a re-distilling and rectifying facility immediately in the rear and included departments for making barrels and bottling and storing whiskey.  The premises held up to 3,000 barrels of blended whiskey, kept at a steady temperature of 85 degrees Fahrenheit.  In 1897 the firm also opened a branch office in Chicago to serve the upper Midwest and coordinate sales to Western states. 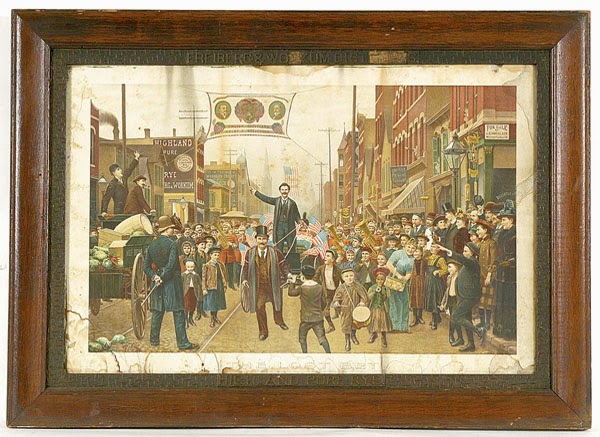 Freiberg & Workum’s success might also have resulted from their many giveaway items to select customers, including shot glass and letter openers.  Their wall signs given to saloons and restaurants featuring their brands were particular notable.   One shown here advertises Highland Rye, depicting the loser of a political bet being made to tow the winner down a busy street to the delight of onlookers.  A second was keyed to the railroad club car, showing two gents and a waiter with two bottles of Cabinet Rye. 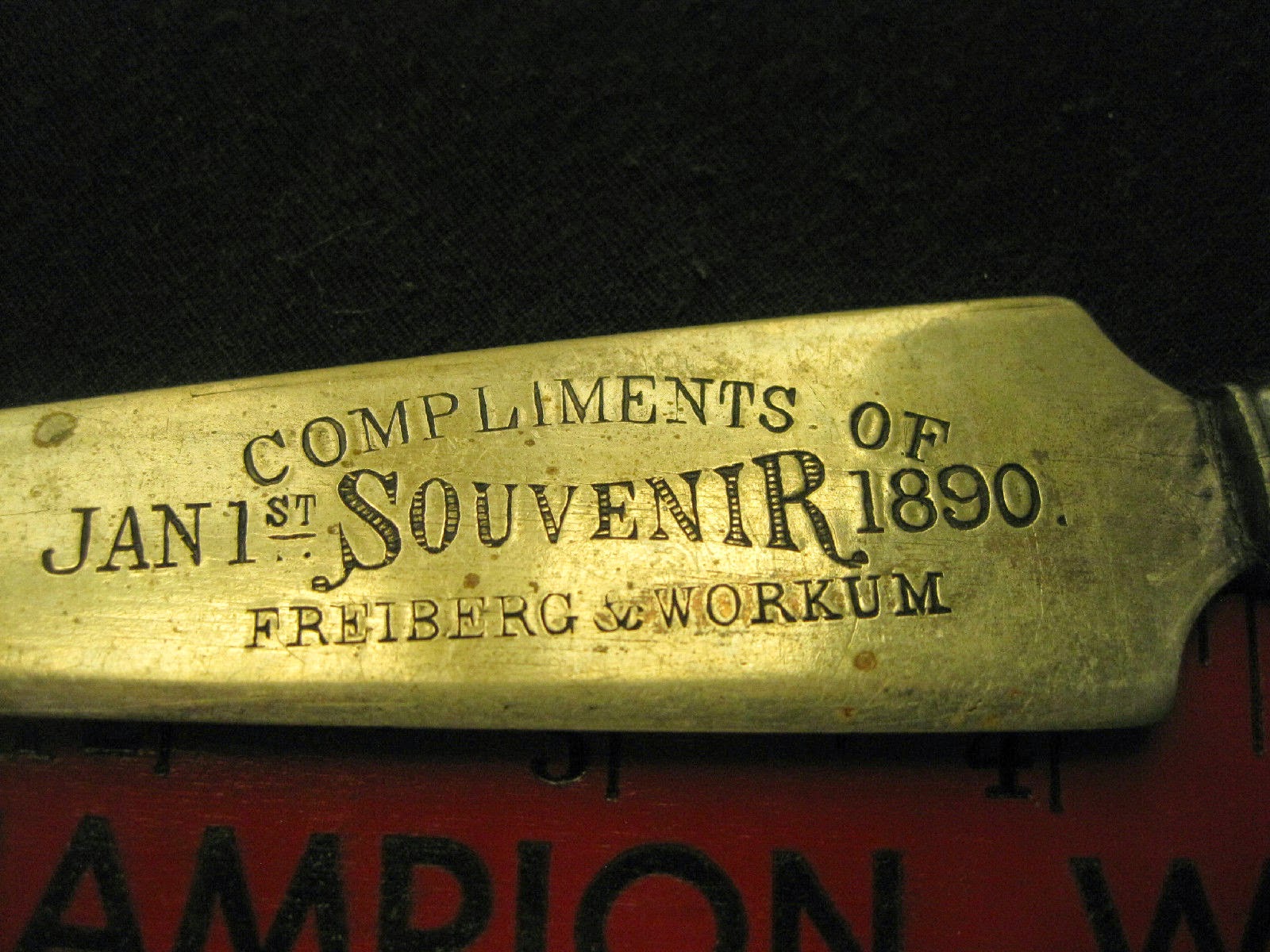 In 1904, recognizing that it also needed to have supplies of “spirits,”  that is, pure grain alcohol, for its blending and other purposes, Freiberg and Workum joined several other distillers in building at Terre Haute, Indiana, a facility called the Commercial Distillery.  They advertised it as “…the most modern, best equipped and largest spirits distillery in the country.”   It would operate under this name until National Prohibition arrived in 1920. 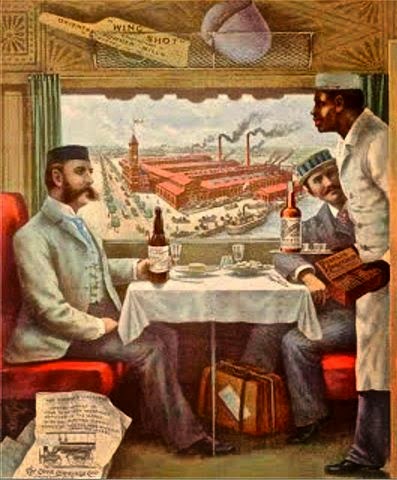 Julius Freiberg died in 1905 and was buried in a Jewish cemetery near Cincinnati.  His sons carried on the business for him. with J. Walter Freiberg as the president.   In 1909 the son sold the Boone County, Petersburg Distillery to the Whiskey Trust.  The new owners reportedly operated it for some years, then sold off all the stored whiskey and eventually dismantled the buildings.  The Lynchburg Distillery in Ohio continued to operate under Freiberg & Workum Co. management.

As the 1900s progressed prohibition campaigns were fast shrinking Freiberg & Workum’s markets for liquor.  Localities and states one by one were voting to ban alcohol.  With Congressional passage of the Webb-Kenyon Act in 1913, the company’s express mail trade into “dry” areas was summarily ended.  When Ohio voted for statewide prohibition in 1918 the beginning of the end was evident for the 63-year-old firm.  Federal records show, however,  that J. Walter Freiberg was still making withdrawals from the company warehouses under government supervision as late as 1920.  He died a year later.

Thus was concluded one of the swiftest rises in the history of the American liquor industry.  In just 12 years, from 1855 to 1867, and despite the intervening Civil War,  the brothers-in-law had gone from running from a small liquor store on a back street in Cincinnati to being the largest producers and merchandisers of whiskey in Ohio and Kentucky.   As long as the country stayed “wet,”  Freiberg & Workum was “the biggest fish.”  With the triumph of the “Drys,” however, the company became “a fish out of water.”  Correction:  “...Out of whiskey.”