The Goodkind Brothers Fetched Up at Last Chance Gulch 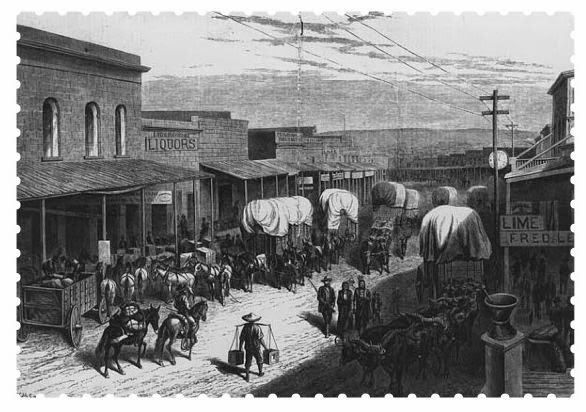 Why would a pair of brothers, born and bred in Chicago, locate to a place in the American West with the doleful name of  “Last Chance Gulch” and expect to prosper?   Edward I. and Abraham L. (Lincoln) Goodkind had the answer and made their liquor enterprise into a celebrated part of Helena, Montana, history.

The brothers’ path to Montana had begun years earlier in the Midwest.  Their father, Edward F. Goodkind, an immigrant from Germany, apparently had accumulated some wealth during his years in the United States.   When the 1880 Census found the family living in Chicago at 135 West Washington Street, the father’s occupation was recorded as “none - capitalist.”  With his wife, Hannah, he had three children still at home.  Abraham, at 15 apparently having left school, was clerking in a store.

The older brother, Edward, already was out of the house and had headed West, likely  to the frontier town of Bismarck, North Dakota.  In 1882, age 17, Abraham joined him there and, possibly fueled by their father’s capital, they established a wholesale liquor business to supply whiskey to the burgeoning number of saloons in town.   They evidently met with considerable success until 1889 when the state of North Dakota voted to go “dry.”

The Goodkind Brothers rapidly determined that they were obliged to move their operation.   Looking around they found a town with a main street called Last Chance Gulch, shown above, and it apparently looked good to them as “a second chance.”   The town was Helena, Montana, almost 700 rugged miles west of Bismarck.  In 1864 four prospectors, almost run out of luck, discovered gold in a gulch off the Prickly Pear Valley.   They termed the strike and their camp “Last Chance.”  As the town grew, citizens reject that name in favor of “Helena.”  When the town was laid out in 1865, the main street, shown above, was placed close to the winding path of the original gulch and so named. 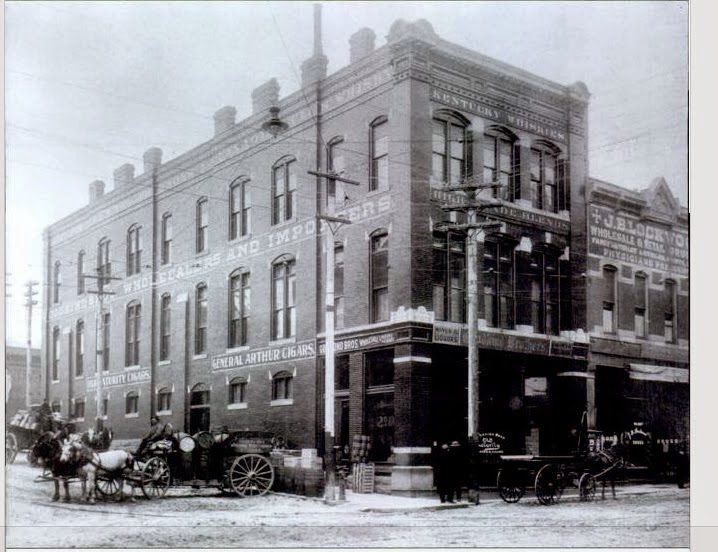 Forming a partnership in 1880 with two locals, the Wise brothers, the Goodkinds settled into a prime location at Sixth and the Gulch.  Their building above, had been constructed about six years earlier for $25,000 ($625,000 today), designed by noted St. Louis architect F. D. Lee.  At three stories and a brick facade, it featured decorative windows and press-medal cornices.  The partners quickly began to advertise their new establishment, sometimes featuring brands with national reputations,  like “Old Maturity,” a label from the Hasterlik Bros. of Chicago and “Metropole” from the Gier California distillery (See my posts on the Hasterliks, February 2013, and Theodore Gier, November 2011).

In 1896, the Wise brothers left the business and began their own liquor store.  Their departure did nothing to deter the Goodkinds who maintained the business at the same address.  A photograph from about 1900 below shows they changed the sign atop their building.  I surmise that the two suited gents lounging in front of the establishments were Edward (likely left) and Abraham.  By now the brothers were blending and compounding their own whiskey for the wholesale trade, selling it in large ceramic jugs with a classy underglaze label advertising “From Goodkind Bros. Wholesale Wines, Liquors and Cigars.” 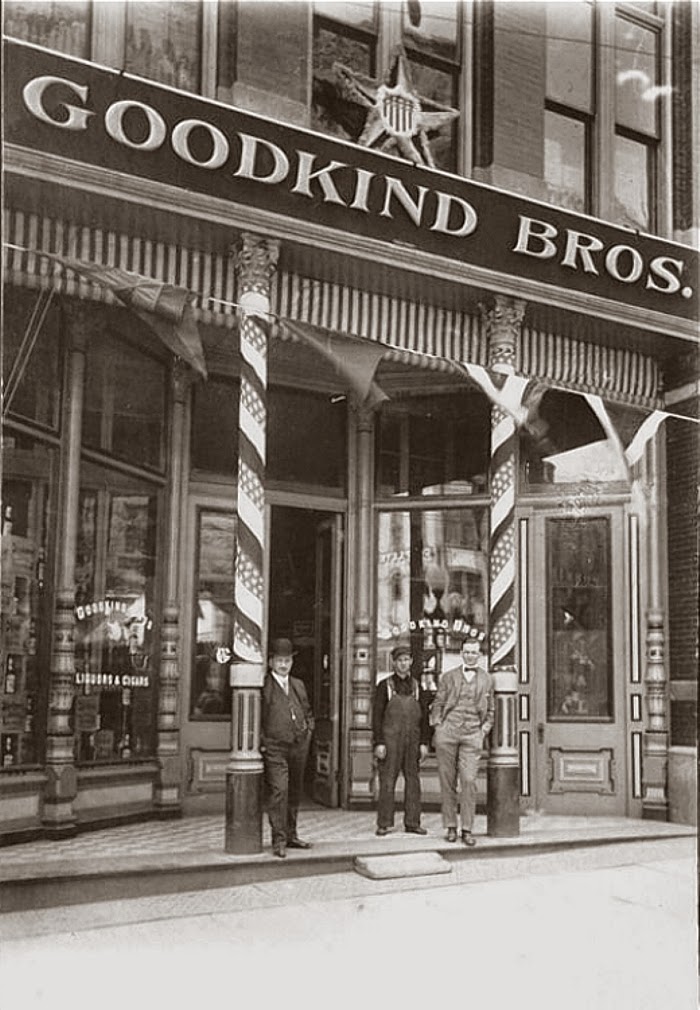 For the retail trade, their company featured several proprietary brands, probably mixed up and bottled in one of the upper floors of what became known as the Goodkind Building.  They trademarked their “Montana Club Whiskey” in 1905 and “Royal Club Rye,” in 1906.  Shown here are two illustrations of their bottles against the backdrop of company billheads (see “Note”).   These pictures indicate the colorful and imaginative way in which the Goodkinds merchandised their products.   One label shows a convivial evening at the Royal Club in “Jolly Old England”;  the “Last Chance Whiskey” label references the Montana mining past showing men panning for gold.  By this time the gold largely had petered out, but Helena was rife with residents who had made millions in mining the yellow metal. "Cedar Leaf Whiskey," shown below, was advertised as aged in steam heated warehouses and bottled under the firm's "personal supervision." 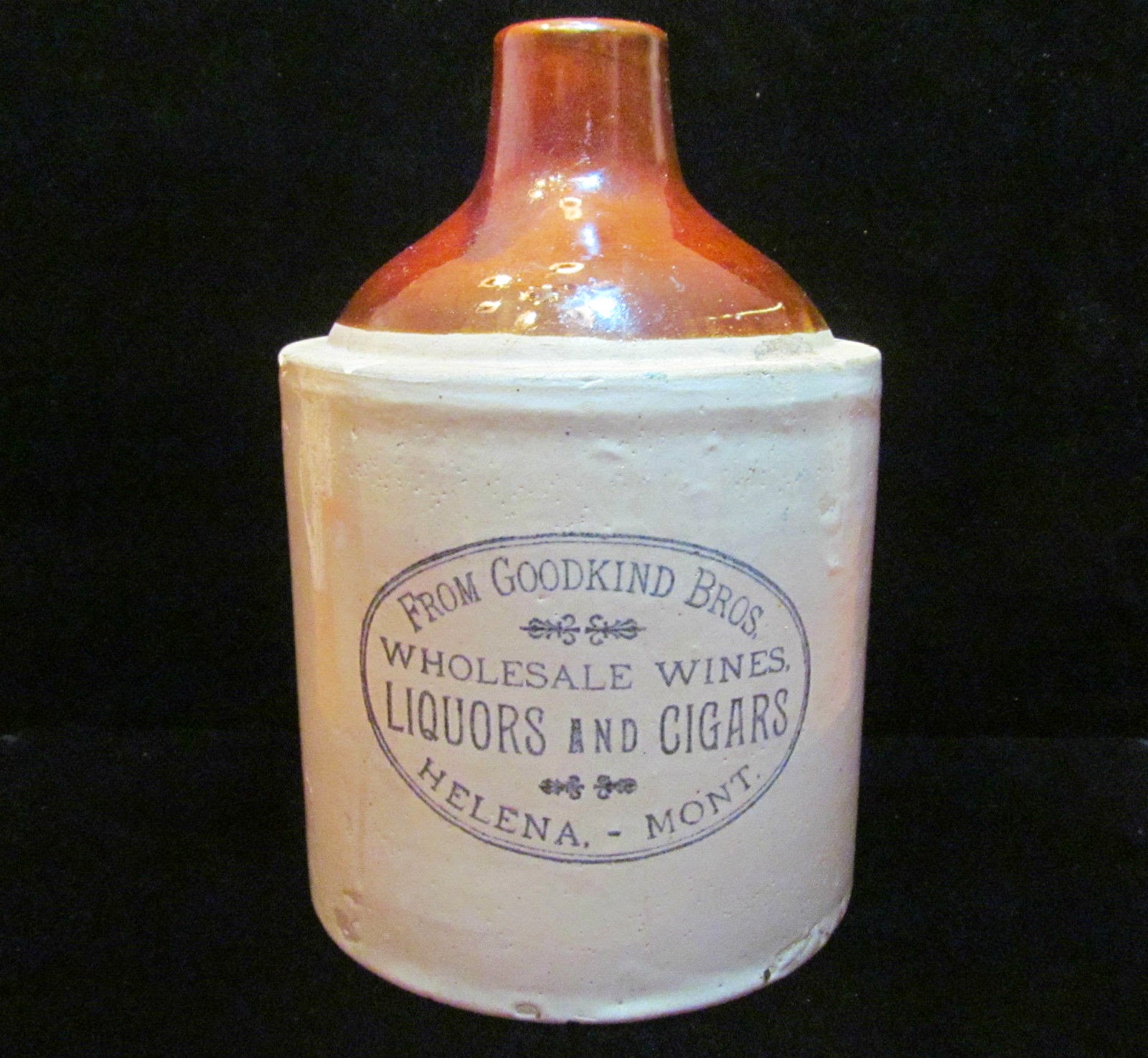 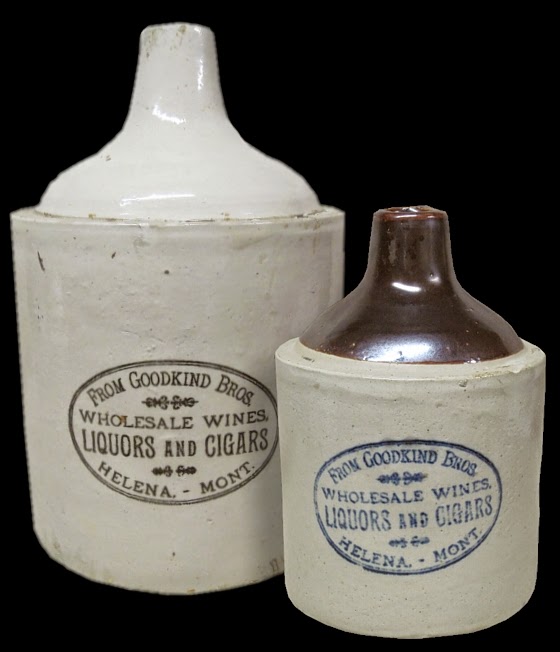 Throughout their early years the Goodkind brothers were having personal lives.  In North Dakota Edward had found a Canadian-born bride named Margaret,  He was 25, she was 23 when they married in 1885.  The 1910 census found the couple living in Helena at 801 Broadway with one adult son, Leon, and the bachelor brother-in-law, Abraham.  Only about a year later Abraham at age 45 took to the altar, marrying Hattie, a woman who was 12 years his junior.   They would have at least three children over the next few years. 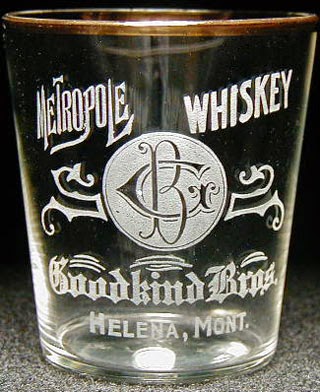 The year 1910 found the Goodkinds locked in a struggle with the Chicago, Indianapolis & Louisville Railroad, alleging that unreasonable charges had been collected for the transportation of four car lots of whiskey in barrels shipped during 1908 and 1909 from Louisville, Kentucky, to Helena, as well as for the cost of a 1908 carload of empty bottles.  Taking on a deep pockets railroad with seasoned lawyers could be risky.  But the Goodkinds won and were awarded reparations (with interest) of $17.33 — perhaps a hollow victory, but indicative of their grit.

The brother pressed on with their liquor business without change until 1916 when Edward died at age 56.  Abraham then continued in partnership with his brother’s widow, Margaret.  He had achieved a reputation as a business and community leader.  One obituary said this of Abraham:  “He look a leading part in all civic enterprises and was always one of the first to give support to any movement designed to improve and build up Helena.”   Prohibition, however, was continuing to plague the Goodkind interests.  On December 31, 1818 — two years before National Prohibition — Montana went dry.

Goodkind Bros. Wholesale Liquors was shut down.  In the 1920 census, Abraham, 55 years old with three youngsters ages 4 to 9, gave his occupation as “retired.”  That seems to have been an temporary state.   With sister-in-law Margaret, the Goodkinds created a loan and securities business.   After Margaret relocated to Los Angeles, Abraham took another partner for several years until 1924 when he and his family moved back to Chicago.   Retaining his legal residence in Helena, however, Abraham continued to own extensive real estate in at least four Montana towns and large irrigated ranch properties in three Montana counties.  Annually he traveled back to the state to look after his holdings.

At the age of 72 Abraham died at his home during March of 1937 after an illness of less than a week, reported to be a victim of pneumonia.  He was buried in Chicago.  When Margaret Goodkind died in Los Angeles, her body was returned to Helena and she was interred next to Edward at Forestvale Cemetery there.  The gravestones of both brothers
are shown here.

Although the Goodkind Brothers are gone, their memory lingers on. The building that continues to bear their name survived a fire in 1928 that destroyed much of the rest of the city block.  Other businesses have come and gone in the structure that today, at least for the time being, stands empty.  Considered an integral part of Helena past, the Goodkind Building is a featured stop on Helena’s historical walking tour.  The city’s website and the narrative that accompanies the tour relate in some detail the story of the Goodkind Brothers who operated their liquor business successfully in Helena for 38 years after finding a permanent home at Last Chance Gulch. 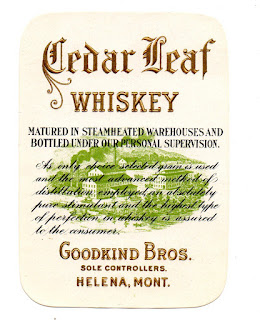 Note:  A gentleman who calls himself Mr. Cachet, made the two attractive and unique drawings above.  In a self-description, he says:  I’m a sixty-five year old artist with a taste for history and the printed word. I’ve been putting my art on envelopes for well over fifty years, and still continue to do that either on a whim or of necessity.  His blog is “Old Paper Art” and well worth a look.