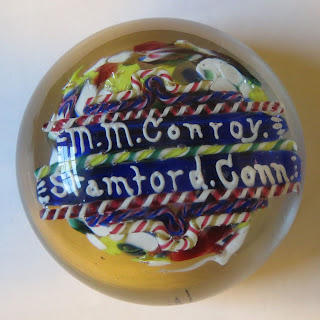 In Wikipedia terms, consider this post a “stub.”  It an incomplete story about a Stamford Connecticut saloonkeeper upon whom I stumbled in trying to research the background of the paperweight shown above with the initials “M. M. Conroy.”

The instant I saw it at a recent bottle show, my instinct was — “This weight was made for a whiskey man.”  It was just a hunch, but my purchase turned out to be a provident one.  Marcus Conroy was a co-proprietor with a man named Kelly in an establishment called the “Pearl Wine Room” in Stamford Connecticut.  This information came from a very helpful librarian at the Stamford Public Library who sent me two newspaper pages with references but had no other information on Marcus. 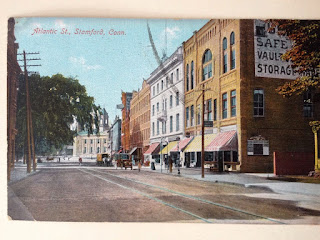 In addition to running their saloon at the corning of Manhattan and Atlantic Streets,  Conroy and Kelly were retailers and dealers in ales, wines and liquors, as well as selling cigars.  They would deliver these goods to a customer’s place of business free of charge.They also claimed to be sole agents in Stamford for Ringler’s Extra Lager Beer.  This brewery had been founded in 1872 in New York City by George Ringler, a German immigrant.  Located in the heart of Manhattan’s brewery district, by 1900 it grew to be the third largest in the Big Apple. 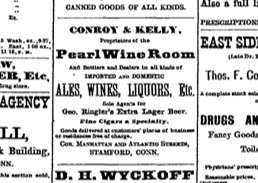 An 1889 article in the Stamford Advocate newspaper reported that Marcus Conroy, identified as co-proprietor of Conroy and Kelly, had applied to the Fairfield County Commissioners for a license to open a second saloon on Stamford’s Main Street.  The hearing took place in the Borough Court Room and the three commissioners did not render an immediate verdict, it appears, since the story concluded:  “We have not yet heard what the decision was.”

Although I cannot be sure Conroy won his license, he was a winner when it came to the Louisiana State Lottery.   Despite the name, the lottery was run by a private corporation in New Orleans during the mid-19th century and  for a time was the only legal lottery in the United States.  Although the operation had a dubious reputation as a swindle and source of corruption, it was able to sell its semi-annual lottery tickets all over the United States.  Shown here are the front and back of a typical ticket from the Louisiana State Lottery. 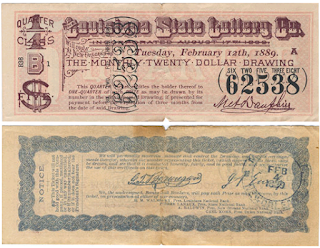 Conroy apparently regularly played the Louisiana State Lottery, one that gave the numbers of the winning tickets to its agents across America who then would notify the purchasers.  For the June drawing in New Orleans, Marcus had purchased one fortieth portion of Ticket No. 50843 for $1 dollar.  The ticket turned out to be the grand prize winner of $600,000 (equivalent to $15 million today).  Conroy’s share was, by my reckoning, worth about $375,000 in current dollars.  As a major winner, his name appeared in newspapers across America.

Here we take a turn into fantasy.  My speculation is that Conroy was so delighted with this windfall that he decided to finance a flamboyant paperweight bearing his name and address, possibly for gifting to friends and favored customers of his whiskey trade.  To create such an object he turned to Whitall Tatum & Co., a Millville, New Jersey, glassworks that made a wide assortment of bottles and other glass items, including paperweights.  Its sprawling factory is shown below. 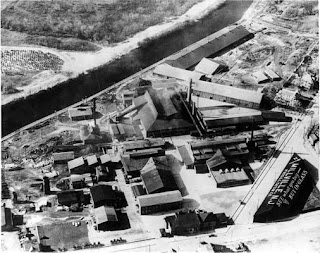 Beginning in the early 1860s, while the Civil War raged, Whitall Tatum began making a line of paperweights.  In time the company developed a cadre of paperweight makers considered the best in the Nation.  The undisputed master of the craft was Ralph A. Barber, an immigrant from England whose father was also a glassblower.   Sometime in the 1890’s Barber, shown right, joined Whitall-Tatum and began to make paperweights.  His creations were recognized  almost from the start as the pinnacle of artistry in the craft. 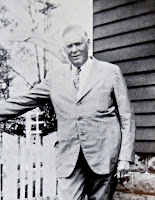 Although Barber did not sign many of his items, the Conroy weight almost certainly was among his creations.  Two bits of evidence exist:  First, the bottom of the weight carries a Whitall Tatum mark.  Second, a very similar weight bearing the inscription “Kizzie Pepper, Millville, N.J.” currently resides in the collection of the New Jersey State Museum in Trenton.  Show below, its resemblance to the Conroy paperweight is striking.

Some controversy has surrounded who made the Kizzie Pepper weight, but Clarence Newell in his book, Old Glass Paperweights of Southern New Jersey (1989),  goes to great lengths to attribute the object to the hands of Ralph Barber.  He noted that the Barbers lived right next door to the Pepper family in the 200 block of South Fourth Street in Millville.    Newell concluded:  “…Barber’s generous nature was such that it would have been entirely in character for him to make a weight and give it to a neighbor.” 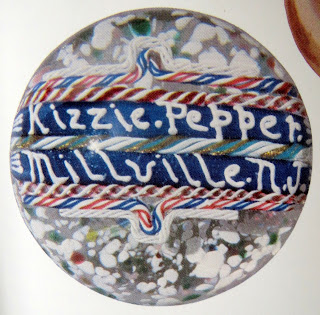 From this evidence I conclude that Conroy’s elegant weight in red, white, yellow and blue, with bars of brightly colored “candy cane” stripes was the work of this famous American paperweight maker.  My guess is that the Stamford saloon keeper was using his new fortune to reward himself and his friends with a token of his lottery success.

As indicated earlier, this vignette is a stub and in need of considerable additional material about Marcus Conway.  I am hopeful that some kinfolk of his will see this post and provide missing information about the man and his life.

Posted by Jack Sullivan at 6:37 AM