T. F. Mackmiller Survived and Thrived in the North Woods 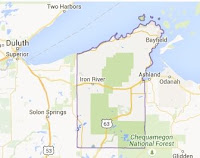 Clearly imbued with an entrepreneurial spirit, Theodore Francis (T.F.) Mackmiller made an odd choice of where to set up in business — a small crossroads village in Northern Wisconsin’s Bayfield County, a county thick with trees, thin on people, characterized by Indian reservations and small mining operations.  The name of the town was Iron River.

Mackmiller was born in Dodge County in southeastern Wisconsin, a farming region lying roughly between the capital at Madison and the Milwaukee metropolis.  He was the son of Friedrich and Friedricke Schallert Mackmiller, both immigrants from Germany.  The date of Theodore’s birth on his gravestone is 1861, but census data gives various dates.  Upon attaining adulthood, he married Alvena Dorothea, who like him had been born in Wisconsin of German immigrant parents.  They would have one child, Lillian, born in 1888. 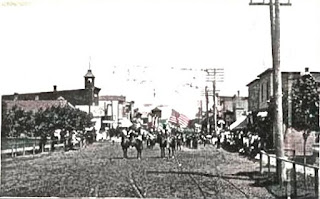 By the time of her birth, the Mackmiller’s were already established in Iron River, the main street shown above.  Theodore was recorded in 1886 as running the “City Meat Market” there, residing above the store with his small family.  He must have seen some future promise despite the town having just a few hundred residents in a sparsely populated region with only timber and mining to provide substantial employment.

Iron River was not completely isolated, however, located at the crossroads of two major highways, one heading west toward Duluth, Minnesota, and the other linking destinations south.  This also was the age of railroad building and the area history is replete with efforts, most of them failed, to link the county to the outside world by rail.  Some of the lines were the Bayfield Harbor and Great Western Railroad; the Bayfield, Superior and Minneapolis Railway;  and the Bayfield Transfer Railway.

At what point Mackmiller abandoned selling ham hocks and bacon to the residents of Iron River is not clear.  By the early 1900s, however, he was fully engaged in selling whiskey.  A 1905 Wisconsin State census recorded his occupation as “wholesale liquor.”  He had recognized that market for whiskey among the thirsty miners — and perhaps among the Native-Americans — had triggered a significant increase in saloons in Iron River and other Bayfield County towns.  He advertised he could supply them with liquor by the barrel or large ceramic jugs that they could decant into their own containers for sales over the bar or at retail.

Evidence is that Mackmiller also was “rectifying” whiskey, that is, blending and mixing raw product to achieve a particular color and taste appropriate for his proprietary brands, “Iron River Club Old Rye Whiskey,” and “Eagle Mountain Rye.”  The former label was advertised on his letterhead from 1910, shown below.   The latter was incised on a silver teapot that would have been given to saloons and restaurants carrying his brands.

One writer has suggested that Mackmiller got his start in Iron River as “a retail cola merchant” and observed:  “It was a tough way to earn a living, but he was successful….”  Mine is a different opinion.  I believe Mackmiller began with a butcher shop but left that occupation to begin his much documented wholesale liquor business.  In selling whiskey he found significant financial success.  One indication is the mark on the base of the Eagle Mountain teapot.  It was made by the Homan Manufacturing Company of Cincinnati —a name it adopted about 1905 — that advertised itself as a premier maker of “Electro Silver and Nickel Ware.”  Etched as it was, this was an expensive item to be given away to customers.  Only an affluent whiskey dealer could afford to do so.

Mackmiller’s newly won wealth also encouraged him to branch out into new activities.  He opened a bottling factory in Iron River and called it “T. F. Mackmiller Iron River Bottling Works.”  This or similar wording was embossed on each of his bottles.   Shown throughout this post, they ranged from green quarts with hand-finished crown tops to aqua hutches with wire and ceramic closures.  Mackmiller also was quick to see the advantage of the savings involved in the automatic bottling making machine.  A clear half-pint, shown right, has the Owens diamond on it and the number “1” embossed on the base.

Apparently without stinting his liquor trade, Mackmiller was marketing his bottled soft drinks and mineral waters vigorously.  The Appleton, Wisconsin, newspaper reported in 1906 that he had just returned from a two-month trip to far off Oregon “looking after business interests.”  In 1910 Mackmiller was reported by the same publication as embarking on a business trip to Chicago.  One indication that he was selling his bottled goods widely was his registering names with the government, something he had never done for his whiskeys.  The Patent and Trademark Office recorded that he successfully filed in March 1903 to trademark the name “Pheasant Brand Splits” for his brand of mineral water.

Wisconsin stayed “wet” until the imposition of National Prohibition in 1920.  That allowed Mackmiller as late as 1919 to advertise in an Iron River directory:  ”Family Wines, Whiskies and Brandies, Reasonable Prices and Best Quality.”   Although within a year he was forced to close his liquor business, Mackmiller could rely on his non-alcoholic beverage sales to sustain him.  By now he also was the president of the Iron River Telephone Company.  The 1920 census found the family living in Iron River.  With Theodore and his wife was their daughter Lillian and an eleven-year-old grandson.

At the age of 73 and retired when Prohibition was rescinded, Mackmiller rejected returning to the liquor trade that had made his fortune.   He continued to live in Iron River during his declining years with Alvena, who died in 1941.  She was buried in the Iron River City Cemetery.    Although he had been afflicted with “rheumatism” through much of his life, Theodore lived another four years before dying in October, 1945, at the age of 84.  He was buried next to his wife; his gravestone is shown here. 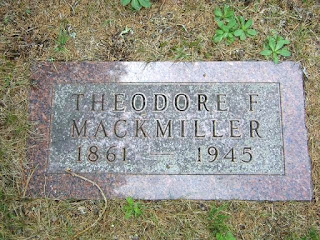 Today Iron River has the same small town look that it had in Mackmiller’s day.  According to the most recent census figures, there were 1,059 people in town and 485 households.  Having driven through Iron River on U.S. Highway 2 on the way to Duluth some years ago, I can attest to its somewhat sleepy character.  The many embossed bottles carrying the name of T. F. Mackmiller and Iron River, help us remember that at the beginning of the last century an enterprising whiskey man helped to put the town on the map.

Note:  All the images of Mackmiller bottles are from the excellent website of a Wisconsin resident who calls himself “Mr. Bottles” and displays pictures of bottles from throughout the Badger State.  He has done a service for his state that might well be emulated in other places.